The United States is showing a slight uptick in the average number of daily coronavirus cases and deaths – as about 20 states reported increases in new infections in the past week.

The average number of infections per day was at more than 37,000 on Tuesday after increasing steadily since the weekend.

Cases, on average, have been trending downwards nationally since July when about 70,000 infections were being reported daily.

Daily deaths are now averaging at just over 840 per day after the average number of fatalities dropped to 720 a week ago.

Deaths in the US have been declining steadily since mid-August when an average of 1,000 American were dying each day. 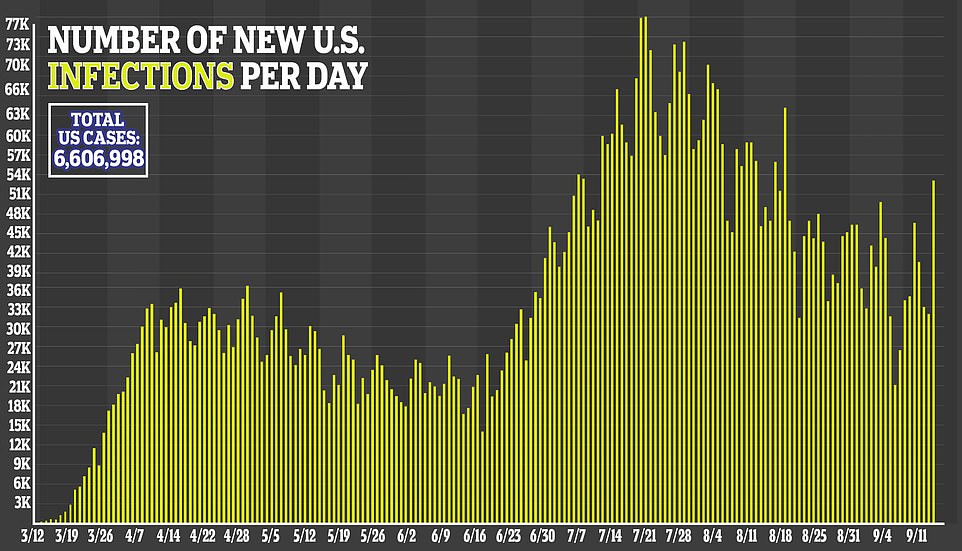 The average number of infections per day was at more than 37,000 on Tuesday after increasing steadily since the weekend. Cases, on average, have been trending downwards nationally since July when about 70,000 infections were being reported daily

Daily deaths are now averaging at just over 840 per day after the average number of fatalities dropped to 720 a week ago. Deaths in the US have been declining steadily since mid-August when an average of 1,000 American were dying each day

More than 195,000 Americans have now died from COVID-19 and there has been over 6.6 million infections.

The uptick in cases comes after health officials had warned there could be increases following the Labor Day weekend.

It comes as 20 states reported an uptick in cases within the last week with North Dakota, Wisconsin and South Carolina all recording single-day highs in new infections.

South Carolina’s infection peaked at 2,454 on September 11 with the state now recording more than 133,00 cases.

Cases in Wisconsin surged to a single day high of 1,624 on September 13. Infections in the state have risen 38 per cent in the last week, bringing the total to more than 96,900.

Twelve of the 20 states that have seen increases in the last week have high case numbers in relation to the population. 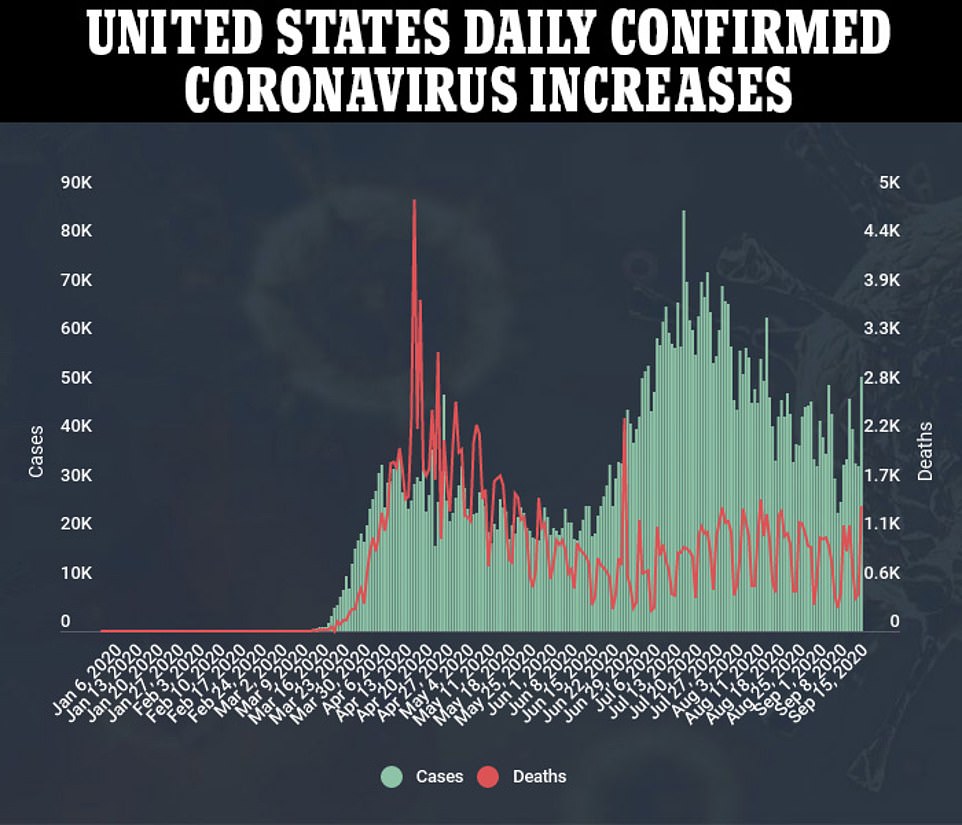 Texas is also among the states seeing an uptick after recording a spike of 5,300 new cases on Tuesday. Cases in the former hotspot state had been on a downward trajectory since mid-August following a summer surge in Sunbelt states that sent the national infection rates soaring.

Eight other states are also currently seeing increases within the last week but their infection rates are lower when compared to their populations.

It comes just days after Dr Anthony Fauci described the data on US infections and deaths as ‘disturbing’.

Fauci was hopeful the US would not see a spike in cases after the Labor Day weekend as it did after other long holiday weekends including Memorial Day and July 4.

Health officials are still keeping tabs on any potential surges from the Labor Day holiday weekend.

An indoor event in Henderson, Nevada drew thousands on Sunday.

Trump on Monday also drew hundreds of supporters to an indoor event in Phoenix, Arizona that his campaign advertised as a ‘Latinos for Trump roundtable’.

Trump has made the case that if demonstrators can gather en masse for protests over racial injustice, so can his supporters. His campaign has insisted that it takes appropriate health precautions, including handing out masks and hand sanitizer and checking the temperatures of those in attendance.

It comes after it emerged last week that Trump had referred to the virus as ‘deadly stuff’ in a private conversation with Bernstein’s former reporting partner Bob Woodward.

Trump, at the same time, was publicly downplaying the threat of COVID-19.

Three days after delivering his ‘deadly’ assessment in a private call with Woodward, he told a New Hampshire rally on February 10 that ‘it’s going to be fine’.

Trump’s acknowledgment in Woodward’s new book ‘Rage’ that he was minimizing the severity of the virus in public to avoid causing panic has triggered waves of criticism that he wasn’t leveling with the American people.

The president told Woodward on March 19 that he had deliberately minimized the danger. ‘I wanted to always play it down,’ the president said. ‘I still like playing it down because I don´t want to create a panic.’

White House says coronavirus vaccines will ship within 24 HOURS of FDA approval as it unveils ‘playbook’ to start giving FREE coronavirus immunizations to all Americans by January (all we need now is a vaccine!)

The Trump administration plans to start shipping coronavirus vaccines within 24 hours of approval from regulators, the government announced Wednesday in its ‘playbook’ to make vaccines for COVID-19 available for free to all Americans as early as January.

In accompanying testimony before a Senate committee, Centers for Disease Control and Prevention (CDC) director Dr Robert Redfield said a vaccine likely won’t be available to the public until spring or summer of 2021.

No companies have completed testing for their coronavirus vaccines or gotten Food and Drug Administration (FDA) approval for them.

Yet Trump has continued to insist that a vaccine will be ready in a matter of weeks – ahead of Election Day on November 3.

Senator Jeff Merkley, a Democrat from Oregon, accused the CDC of being politically motivated.

‘It escapes no one’s perspective that you’re deliberately laying [plans to have states start administering vaccines] two days before the election,’ Merkley said, asking Dr Redfield who in the White House had asked him to do so.

When Redfield answered that ‘no one’ had, Merkley hit back that he was ‘influencing the election,’ asking ‘what happened to science driving decisions’ and said that the improbable vaccine timeline ‘undermines [the CDC’s] credibility.’

In a report to Congress and an accompanying ‘playbook’ for states and localities, federal health agencies and the Defense Department sketched out complex plans for a vaccination campaign to begin gradually in January or possibly later this year, eventually ramping up to reach any American who wants a shot.

Vaccines will be available to anyone, regardless of whether or not they have health insurance.

Whenever a vaccine to combat the virus that has infected more than 6.6 million Americans and killed nearly 196,000 people in the US, the Pentagon plans to be involved with the distribution of vaccines, but civilian health workers will be the ones giving shots.

The campaign is ‘much larger in scope and complexity than seasonal influenza or other previous outbreak-related vaccination responses,’ said the playbook for states from the CDC.

President Trump tweeted: ‘Vaccines are moving along fast and safely!’ following the report’s presentation on Wednesday, as the US recorded an uptick of more than 51,000 cases and over 1,400 deaths over the past 24 hours.

Among the highlights in the ‘playbook’:

Some of the broad components of the federal plan have already been discussed, but Wednesday’s reports attempt to put the key details into a comprehensive framework.

Nonetheless, some experts are concerned that these plans are being made and presented prematurely.

‘Isn’t this putting the cart before the horse?’ Dr Peter Hotez, dean of the Baylor College of Medicine’s National School of Tropical Medicine, said in an interview with DailyMail.com.

‘We don’t really understand the full extent of efficacy or safety of these vaccines, and each vaccine may be different.

‘Some may prevent infection versus some [others that] will reduce the severity of illness. So it’s very complicated to understand the different variations in terms of efficacy and safety and come up with a full plan.’

Dr Hotez also questioned the impetus for the report, wondering whether Congress had asked to see a plan like that laid out on Wednesday, or if it was something ‘the WHite House is promoting.’

Either way, ‘this is unprecedented,’ he said.

Distribution is happening under the umbrella of Operation Warp Speed, a White House-backed initiative to have millions of doses ready to ship once a vaccine is given what’s expected to be an emergency use approval by the Food and Drug Administration (FDA). Several formulations are undergoing final trials.

But the whole enterprise is facing public skepticism. Only about half of Americans said they’d get vaccinated in an Associated Press poll taken in May.

Of those who wouldn’t get vaccinated, the overwhelming majority said they were worried about safety.

To effectively protect the nation from the coronavirus, experts say upwards of 70 percent of Americans must either be vaccinated or have their own immunity from fighting off COVID-19.

Since the poll, questions have only mounted about whether the government is trying to rush COVID-19 treatments and vaccines to help President Donald Trump’s reelection chances.

Before the Republican National Convention in August, the FDA granted authorization for treatment of COVID-19 patients with plasma from people who have recovered, even though some government scientists were not convinced the clinical evidence was sufficiently strong.

And last week it was reported that Michael Caputo, a Health and Human Services (HHS) Department political appointee, tried to gain editorial control over a weekly scientific publication from the Centers for Disease Control and Prevention (CDC).

US says all UN sanctions on Iran restored, but world yawns

Trump says he thinks he'll have a nominee next week

Ruth Bader Ginsburg: Why is RBG so important to the US Senate?

Vulnerable GOP Sen. Collins splits with Trump: Wait until after the election to replace Ginsburg

Susan Collins says Trump can nominate a justice, but Senate vote should wait until after election

One of largest known T. rex skeletons up for auction at Christie’s