Democratic nominee Joe Biden called his campaign ‘Harris-Biden’ while in Florida Tuesday after his running mate, Sen. Kamala Harris, made the same slip.

‘The Harris-Biden administration is going to relaunch that effort and keep pushing further to make it easier for military spouses and veterans to find meaningful careers,’ the former vice president said at a campaign stop in Tampa.

On Saturday, Harris made the same mistake, referring to the Democratic ticket as the ‘Harris administration, together with Joe Biden.’ The slip-of-tongue had Republican operatives licking their lips as President Donald Trump has called Biden a ‘Trojan Horse for socialism.’

Biden’s trip to Florida came as a new poll showed him 5 points ahead of Trump in the Sunshine State.

The Democratic nominee’s two events were focused on Latino voters and veteran communities, as he needs to firm up his support with Hispanic voters and is positioned to make gains from servicemembers after The Atlantic’s report that had President Donald Trump calling American war dead ‘losers’ and ‘suckers.’ 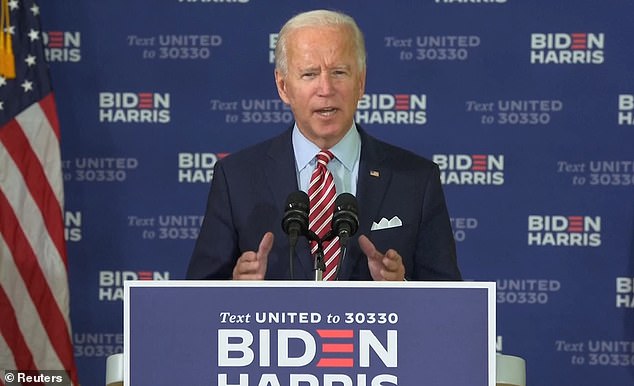 Democratic nominee Joe Biden campaigned in Florida Tuesday in an effort to boost his support among Latino voters and servicemembers. During scripted remarks he accidentally referenced the ‘Harris-Biden’ administration 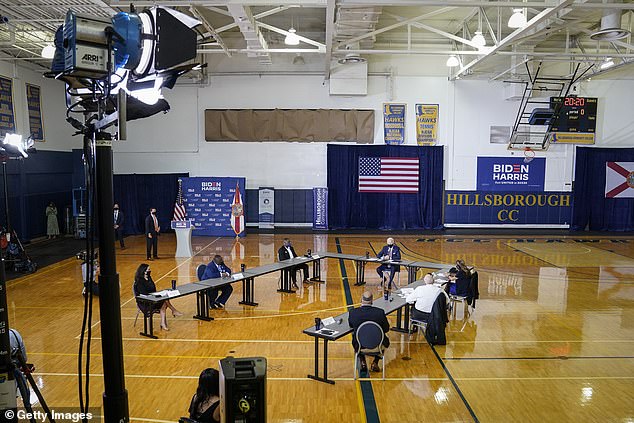 Biden participated in a socially distant conversation with veterans and military spouses at Hillsborough Community College in Tampa, Florida on Tuesday 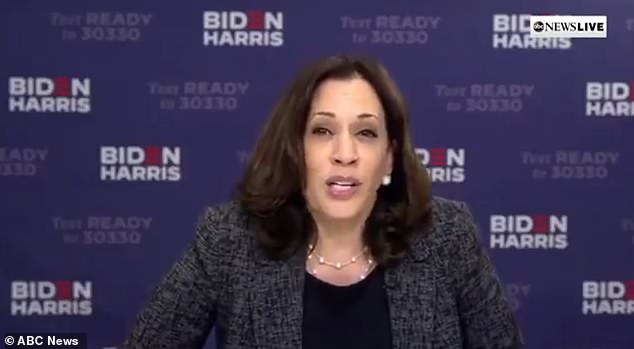 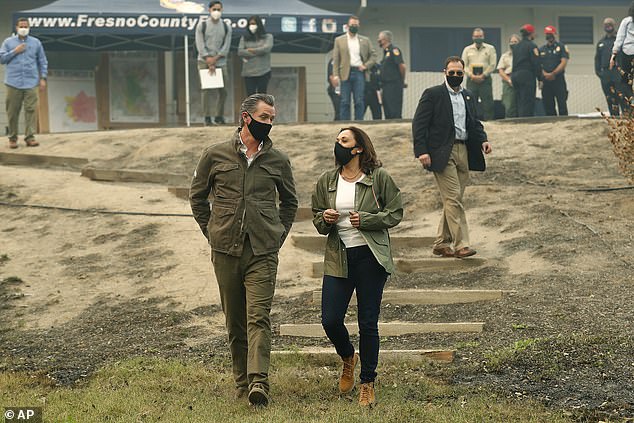 ‘Donald Trump has no idea about the ideas that animate women and men who sign up to serve: duty, honor, country. That’s what service and patriotism is all about,’ the former vice president said.

Biden again went after Trump for those comments, which the president denies, while also showing off his stark style difference from Trump by providing tedious answers to veterans’ questions during an hour-and-a-half long Tampa event.

‘The bad news is I show up when I’m invited,’ Biden joked, promising the socially distanced group of six that he would follow-up with them on anything unanswered. ‘I’m like the poor relative. The poor relatives show up, eat all your food, stay longer than they should. The wealthy ones don’t come.’

Biden arrived at Hillsborough Community College in Tampa and gave scripted remarks, before sitting down for a Q&A.

At one point he misread Iraq for Iran, as he hammered Trump for not caring enough about American war dead.

‘Everyday I carry with me a card, and I’ve been doing this for the better part of 14 years. It’s my schedule. On the back of it, wherever the schedule ends, there’s always a black box that I have here. It says daily troop updates,’ Biden explaned.

Not ‘roughly’ 6,000, Biden went on. ‘923, because every one of these fallen angels left behind a family, left behind a community, there’s an empty seat at the table now.’

The 77-year-old former vice president got ‘Iraq’ right the second time around.

Biden went on to talk about getting veterans better mental health services, telling the room a horrifying story that he learned about from his now late son Beau in 2011, which took place in his adopted hometown of Wilmington, Delaware.

‘There was a Marine veteran who had been deployed a total of six tiems, if my memory was correct, who was in a relatively modern, upscale middle class neighborhood,’ Biden said.

‘Saw a woman walking her dog, ran over her, killed her, killed the dog, put her in the back of his pick-up truck, took her down I-95,’ he continued. ‘Molested her, put her back in the truck, came home, called the state police and said, “I just killed someone, there was a voice in my head, I had to kill someone.”‘

During the Q&A portion, Biden would listen intently and give long-winded answers, though would slip in digs at Trump.

As the event wound down, he also talked of Trump’s inaction in responding to the Russia bounty story.

‘And by the way the president’s met and talked with Putin six times and he still hasn’t mentioned the bounty on the heads of Americans in Afghanistan and the recent ramming of American vehicles by Russians in Syria, and injuring of American soldiers,’ Biden said.

He ended his first of two events in Florida by promising to be all Americans’ president.

‘Look, I’m running for president as a Democrat, but I’m not going to be a Democrat president, I’m going to be an American president,’ he said. ‘And the one thing we’ve always had bipartisanship on is support of the military.’

‘I can tell you if I’m elected I’m going to spend as much time trying to help people who didn’t vote for me as those who did,’ Biden added.

‘I was horrified to see the pictures from last night,’ O’Malley Dillon said, referencing a Trump rally held in Arizona.

The night before, the president had held his first indoor rally – this one outside of Las Vegas, Nevada – since the disastrous Tulsa, Oklahoma rally in June.

‘People will die because of these types of events, and that’s from the president of the United States,’ O’Mally Dillon told Politico.

Biden’s trip to Florida – his first since the advent of the coronavirus pandemic – came the same day Monmouth University put out polling that showed him 5 points over Trump in the Sunshine State.

The lead could be slim, as Monmouth only surveyed 428 Florida voters, making the margin of error 4.7 per cent.

Like in other recent polls, Biden’s number of Hispanic supporters is slightly down from the percentage of the Latino vote that went for Hillary Clinton in 2016.

Patrick Murray, director of the Monmouth University Polling Institute, suggested ‘Trump could be doing slightly better among older Latino voters than he did four years ago’ because younger Latino voters and Puerto Ricans are moving into Florida, which should give Biden a natural edge.

The poll also called military support for Trump ‘weak’ in the state, with the incumbent leading Biden by just 4 points – 50 per cent ot 46 per cent.

While Biden campaigned in Florida, Harris toured wildfire damage Tuesday in California and his wife, Jill, went to Michigan for a campaign trip.

Model reveals she faces daily hate because of her unibrow

Essential workers in the nation’s capital share their coronavirus anxieties