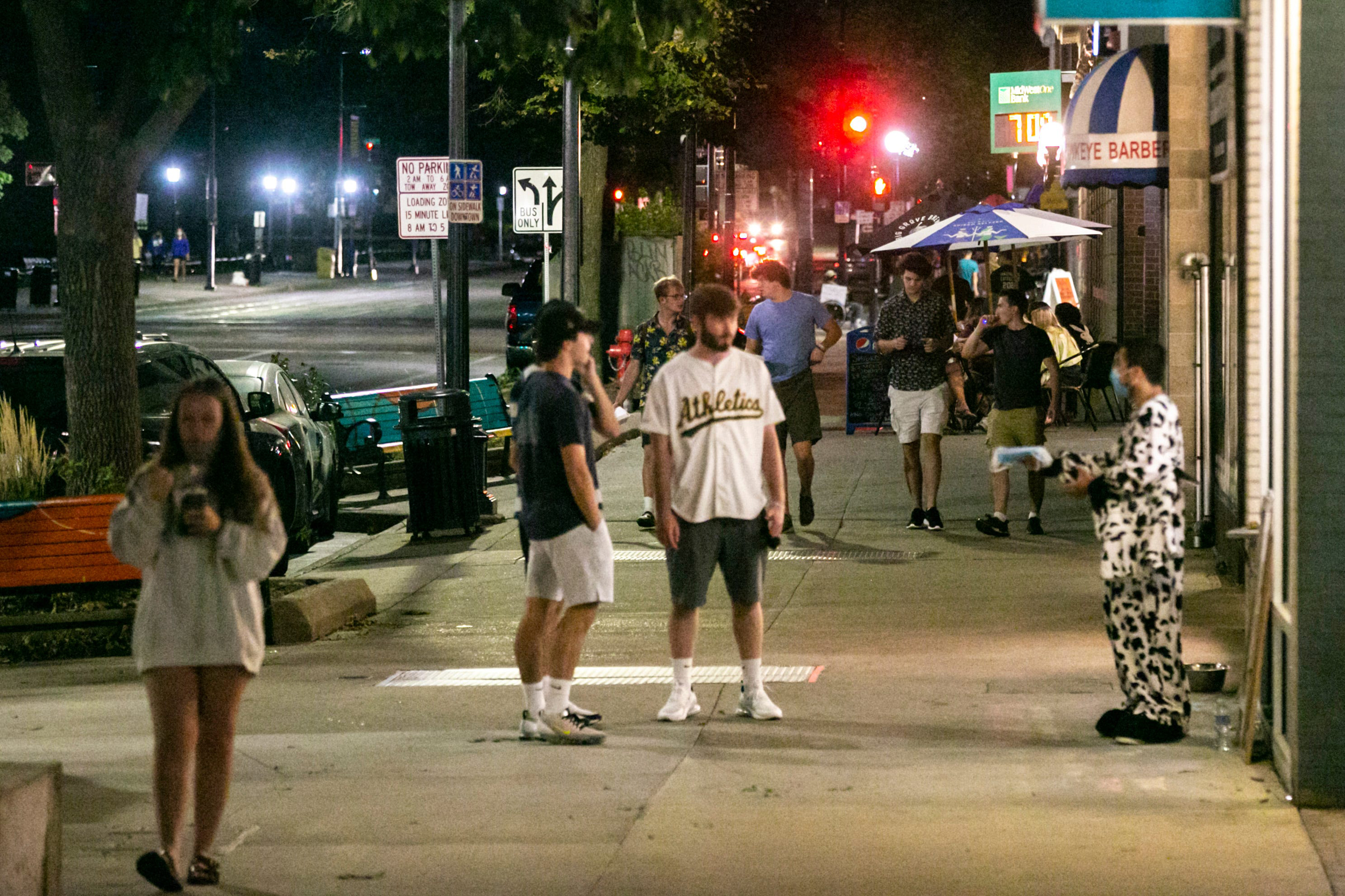 The place we nicknamed “the COVID Lounge” opened across the street from us at the end of July, which is moving day in Iowa City. Every single night for three weeks straight after that, we watched as dozens of young, unmasked undergrads in Hawkeye gear wandered up the porch with cases of Natty Light and grilled meat to hold group sing-a-longs. I never thought I’d see a porch full of undergrads under a strobe light pumping their fists triumphantly to Toto’s “Africa” — let alone during a pandemic — but it’s 2020 and here we are.

The neighborhood met them with dread — though, perhaps, not surprise. We had anticipated them.

My partner and I moved here from Berlin in 2019; we live in the center of downtown, next to the town’s oldest grocery store. In pre-COVID-19 times, it almost felt like the five square blocks surrounding us were a tamer, tidier Brooklyn or Berlin with less interesting graffiti: We were across the street from the fiction writers’ bar and the poets’ bar, and just down the street from the Riverside theater, live music venues and an excellent record store.

But college towns like this are, under the best of circumstances, built on a trade-off between permanent residents and students. Universities bring culture and intellectual life to (in many cases) otherwise small towns; in turn, the residents put up with (in our case) some 30,000 18- to 24-year-olds as temporary neighbors for nine months out of the year.

Iowa City is both home to a Big Ten football school and the Writers’ Workshop, where my partner teaches as a visiting professor. He grew up in a town of 221 before moving here as an undergrad and remembered it as “the Paris of Johnson County.” (He told me he preferred it when “downtown was run-down and the football team was terrible.”) The city advertises itself as a haven for the arts and liberal values: It was the first UNESCO City of literature in the U.S.; downtown sidewalks are filled with plaques quoting famous local writers and signs for woman-owned businesses; the city council is known as a left-leaning bastion in a reddish-purple state. It sponsored a years-long campaign to become “The Greatest Small City for the Arts” by investing in local music venues and expanding the indie movie theater — which, due to COVID-19, are now indefinitely closed.

Since mid-March, though, our nononline lives have been reduced to our front porch, socially distanced conversations with our downstairs neighbors (one of whom is a reporter for the local paper) and masked conversations with the staff at the grocery next door — which serves as our unofficial hub for all the neighborhood gossip and outrage. It also has the best beer and wine selection in the city and so, as July moved into August, we watched from our porch as the trickle of unmasked undergraduates grew into a nightly parade, en route to large social gatherings that some other municipalities have explicitly banned.

So, like many people, we are confronting an awful truth: Where you live — your country, your state, your city — and the people who run it are in control of your risk of contracting a potentially lethal virus. And the people in charge of this university, and this state, have not done nearly enough to protect this community.

Kim Reynolds, the Republican governor of Iowa, declared at the end of Ma​y that the government cannot prioritize its citizens’ lives over their livelihoods (though one clearly is no good without the other) and abruptly opened the place up — bars, bowling alleys, gyms, salons — even as the state was reporting continuing outbreaks at meatpacking plants and the curve had not exactly been flattene​d.​

By June, we became the first state to allow high school sports teams to practice; the ever-changing roster on the Press-Citizen​ of which football teams are playing and which ones are in quarantine is essentially a​ record of utter indifference to the spread of a virus that kills some and has the potential to cause serious chronic health problems in others, even young people. Our university president, Bruce Harreld wa​s among only three of 12 college presidents who voted to continue Big Ten football.​

The University of Iowa — unlike Iowa State University in Ames — refused to do mandatory testing for incoming students, citing lack of resources and claiming that a negative test would give students a false sense of security. It did not take into consideration whether it would provide a sense of security to local residents, who otherwise must contend with knowing that hundreds, if not thousands, of the 30,000 students may transmit a potentially lethal virus to us in grocery stores or on public transportation, let alone to their professors and each other — around 25 percent of classes are still held in-person — or to health care workers.

While some universities, like Northwestern, enforced strict penalties against student gatherings, Iowa preaches only personal responsibility — an odd response to a virus that, by definition, poses a collective threat to the community — and vague language that multiple violations might be referred to the student code of conduct.

The harrowing account of a first-year student who tested positive on the first day (written by our neighbor) went vir​al:​ ​She was told to move herself and all of her belongings across campus at 11:30 at night, and ended up in a dirty, bug-infested room, being given cold rice and meat and three bottles of water. She then had a panic attack and skipped town the next day on a public bus to quarantine in an Illinois hotel room. (“We didn’t expect anyone to have COVID-19 on the first day,” she was told, five months into a pandemic that has now infected more than 6.4 million American​s)​,

By the end of the first week of classes, Ames and Iowa City were trading places for second and third on the New York Times ranking of the cities with the fastest-growing rates of COVID-19. When the inevitable photographs of maskless undergrads packing the bars went viral, Harreld publicly scolded local businesses​,​ not the students; Reynolds closed the county’s bars on Aug. 27.​ But it was too late.

As of Saturday, the total number of self-reported COVID-19 cases at the University of Iowa since Aug. 18 is 1,732 — among the highest count of any university in the country. And the party goes on.

The weekend after the bars closed, we had a roof full of undergrads in the alley behind us, the COVID Lounge was still raging and a daily afternoon game of beer pong two doors down from them had grown into a Saturday night shindig with three dozen undergrads packed on the porch and backyard. The local police would show up to “educate” the house on the local mask ordinance (passed by our local city council in defiance of the governor); the party would grow larger after they left.

Rumor had it that someone called the landlord behind the COVID Lounge, who said they paid their rent by direct deposit, so he didn’t care. The beer pong party continued apace. The only thing that got shut down was the house party down the block — because an angry dad who also happened to be the leaseholder got wind of it. His swift action was more than the city, the state or the university seemed inclined to do.

It’s hard not to see the indifference as yet another form of white privilege, especially when the same police department that tear-gassed peacefu​l pr​otesters in June refuses to break up crowds of white athletes openly partying through a pandemic, or the football department that made national headlines​ for racist​ treatment and bullying of Black athletes then spends the summer trying to preserve the football season at​ the cost of the community’s health.

I, too, want to see live music here, go to clubs here, have a beer at George’s. But this is not that time yet. And every day this goes on in Iowa City makes the time when we can safely return to our lives further in the future. I want each one of us to imagine a time when we can see our friends, hang out downtown, go to a movie without endangering others — students and all. I just wonder sometimes if the president of the university and the governor do, too.

A 'very serious situation' is unfolding in Europe as Covid-19 cases soar, WHO warns

New claims for unemployment benefits are at 860,000

North Korea fears: China could 'use Kim as proxy' during fresh conflict with South Korea