Rubbing an itch instead of scratching it can ease the irritation more quickly as it activates a soothing pathway from the spinal cord, researchers claim.

Scientists from the University of Miami Miller School of Medicine investigated the neural pathways behind forms of ‘itch relief’ including rubbing and scratching.

People should stop scratching and start rubbing skin in order to activate an anti-itch ‘pathway’ in the spinal cord that calms the irritating sensation, the team said.

Stroking or rubbing to relieve an itch can also reduce the risk of damaging the skin, especially in sensitive areas like the eyes, according to the Miami researchers.

Stroking, or rubbing an itch starts a cascade of events inside the body including firing off neurons in the spinal cord that ease the irritation and sooth the skin. 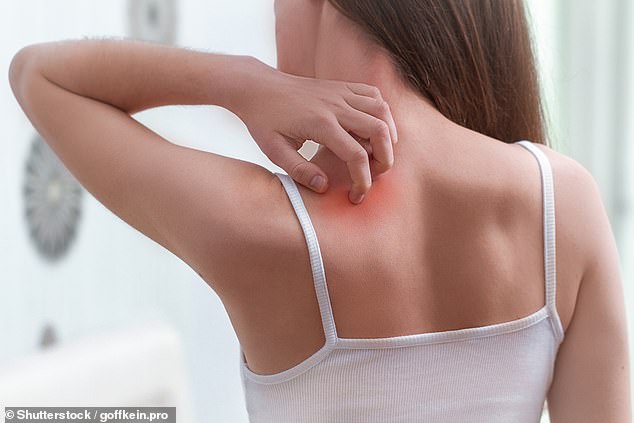 Stroking or rubbing to relieve an itch can also reduce the risk of damaging the skin, especially in sensitive areas like the eyes, according to the Miami researchers

As part of the study, researchers triggered the need to itch in a mouse and then monitored neurons as they relieved that itch with a stroke.

The team from the University of Miami recorded the electrical response from dorsal horn neurons in the spinal cord while they stroked the animals’ paws.

Dorsal horns sit at the back of the spinal cord and make up the central grey matter that form two arm shapes and are linked to both touch and itch.

The neurons fired more often as the mice were stroked and less often after the stroking ended, the researchers said.

The same decrease could be seen when the team directly stimulated touch-sensing neurons under the skin, the study authors said.

However, inhibiting both sensory neurons and a sub-type of anti-itch interneurons in the spinal cord failed to decrease the response from dorsal horn neurons.

The results show that stroking sets off a cascade, activating sensory neurons under the skin that then activate anti-itch interneurons in the spinal cord. 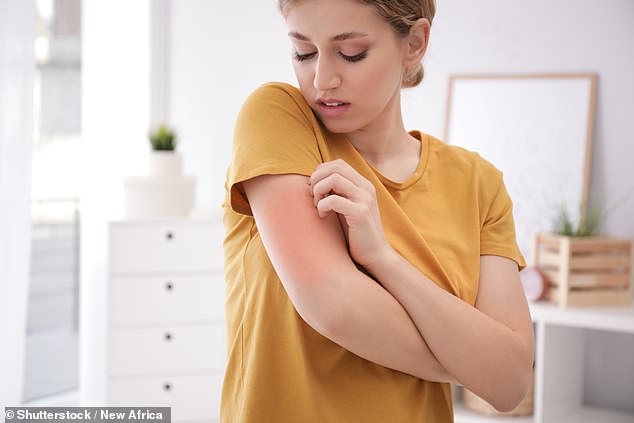 ‘We investigated the mechanisms behind touch-evoked inhibition of itch in mice. Stroking the skin reduced the activity of itch responsive spinal neurons.

‘We hypothesised that innocuous mechanical stimuli would inhibit itch signalling in the spinal cord.

The research conducted on mice was published in the Journal of Neuroscience.

It is technically known as pruritus and may have evolved as a way to protect the largest organ on the human body – the skin – from parasites and the build up of dead cells.

This could also be the why itching can be contagious as ancient humans may have scratched themselves in response to other tribespeople doing the same.

Itching has its own circuitry – involving chemicals and cells in the body – that triggers the need to scratch. This is a human universal.

Recent studies have shown that rubbing an itch could be a more efficient way of tackling an itch as it triggers a ‘cascade’ of neuron activity in the spinal cord.

Children with a runny nose DON'T have Covid-19, expert warns

As India's virus cases rise, so do questions over death toll

Stillbirths have surged up to 50 percent amid COVID-19 lockdowns

Hawaii to allow travelers to skip quarantine with virus test

DR MICHAEL MOSLEY: Food to improve your mood… and boost your energy!

Jake Quickenden girlfriend: How long have Jake and Sophie been dating?