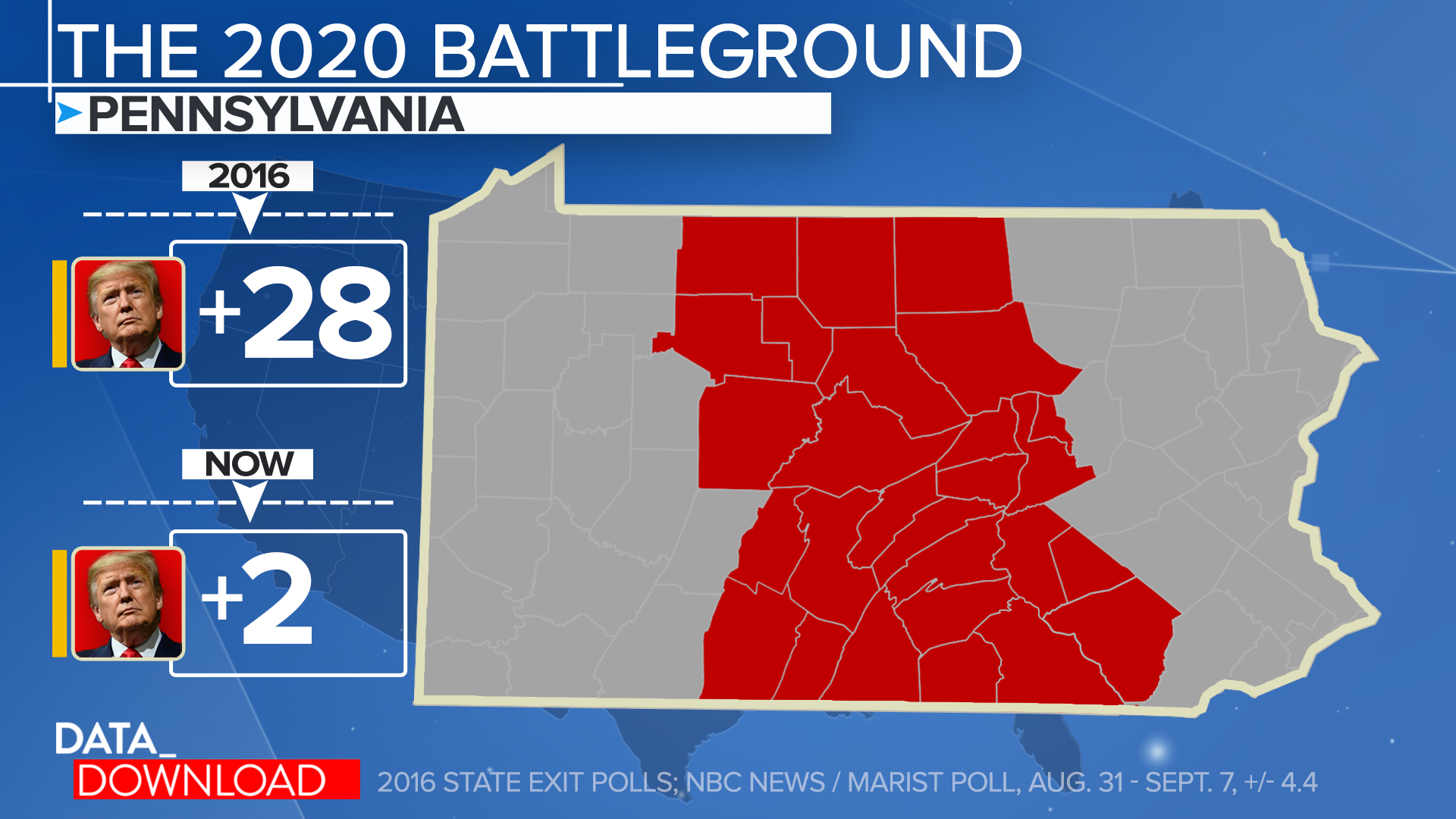 WASHINGTON — As 2016 proved, presidential elections are not about national poll numbers, they are about the states and the Electoral College — and states have their own identities, cultures and voter pools.

Over the next few months, the difference between national- and state-level polls and the differences between specific states is likely to become more pronounced as voters turn their attention to the campaign and make final decisions about the two major presidential candidates.

This week new NBC News/Marist polls of Florida and Pennsylvania showed what some of those differences might look like as national trends combine with different state demographics to create the 2020 electoral playing field.

First, let’s look at Florida. The latest NBC/Marist poll shows the state is looking like it usually does — a super-tight battleground. In six of the last seven presidential races, the state has been decided by less than 5 percentage points.

The latest poll shows some movement among different voter groups, but with a similar overall result, a dead-even race.

The poll suggests Democratic nominee Joe Biden is struggling with Hispanic/Latino voters in the state, particularly compared to what Hillary Clinton did with those voters four years ago, according to exit polls from 2016. But the data also show that Biden has made up for those losses by doing much better than Clinton did with white voters, particularly white college grads, a group that has been a challenge for President Donald Trump.

You can see what those differences look like when you examine a regional breakdown of the state.

In Pennsylvania, the story is different. Trump narrowly won the state in 2016, but Biden has built an edge in the poll that makes Pennsylvania a more familiar bluish hue. Until 2016, the state had voted Democratic in six consecutive presidential elections — that includes 2000 and 2004 when Republican George W. Bush won the White House.

Why does Pennsylvania, which was also a close state in 2016, look so different than Florida in the NBC/Marist poll? Like Florida, Biden is seeing big gains with white college grads, but there are far fewer Hispanics in Pennsylvania to offset those increases. Much of the non-white vote in Pennsylvania comes from Black voters who tend to still be strongly with Biden.

That bump with white college grads has some big impacts in the regional vote in the state, particularly in the suburbs of Philadelphia, which are homes to many college degrees: Bucks, Chester, Delaware and Montgomery counties.

Clinton won those four counties by about 14 points in 2016. But in the NBC/Marist poll, Biden leads by twice that, 28 points, in those same places. And central Pennsylvania, a massive chunk of the state that includes counties with high numbers of degrees, such as Dauphin, Centre and Cumberland, shows a shift to Biden. In the poll, he’s down by 2 points in area. Trump won it by 28 points in 2016.

For all the differences in the two state polls, however, there was one big commonality: The vote among those 65-and-older looks remarkably similar. Trump won those voters by double-digits in both states in 2016, but in the latest NBC/Marist polls Trump’s edge has evaporated. Biden and Trump are essentially tied.

One reason for that large shift may be the administration’s response to the COVID-19 pandemic. While the White House has downplayed the impacts of the virus and its potential dangers, it has hit older Americans much harder. Almost 80 percent of all U.S. COVID deaths have been among those 65-or-older.

Of course, standard polling provisos apply to all these data. It’s still only September and who actually turns out to vote is always crucial. This year, the impacts of mail-in voting add yet another wrinkle to the election equation.

But Election Day is less about the national electorate than it is the individual voter pools in the states. And even small moves in national polls can look very different at the state level.

Tayshia Adams ‘Thriving’ Amid Reports She Found Love On The ‘Bachelorette!’