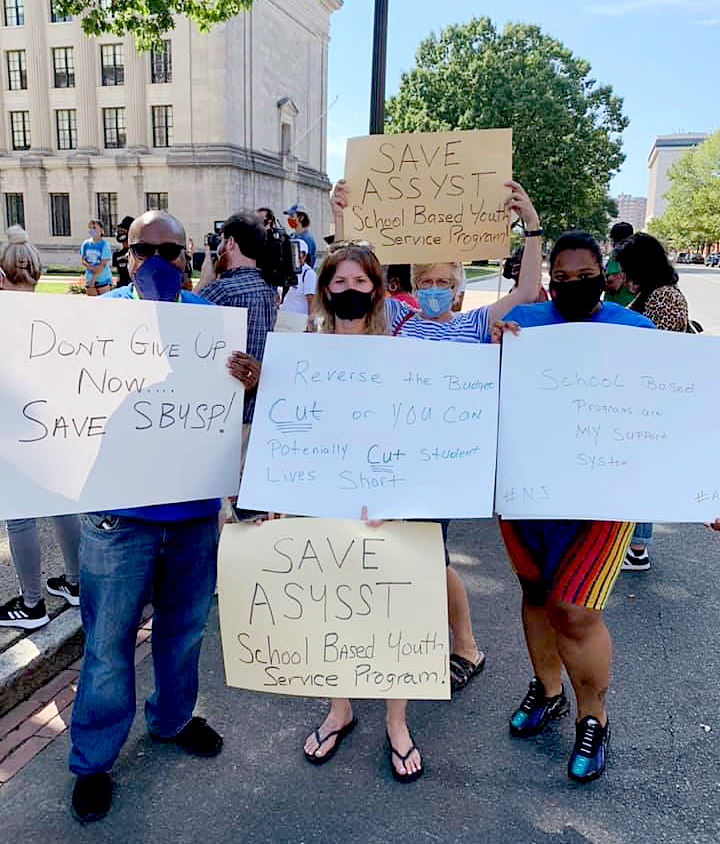 After giving birth almost two years ago, Nayeli Espinoza agonized over whether to drop out of her high school in Trenton, New Jersey, and get a job to support her newborn son.

She credits the School Based Youth Services Program at Trenton Central High School with allowing her to continue her education by helping her secure day care and giving her a place to talk about her problems with counselors.

But the program that thousands of New Jersey students, particularly those in lower-income districts and communities of color, consider a lifeline could be eliminated at the end of the month under the proposed state budget. The plan has sent students and their families scrambling to figure out how to get crucial services without it.

“We have this program that can help us be something for our kids in life, and the state is taking that away from us,” Espinoza said. “This makes me sad.”

Since recently learning of the proposed cut, students and families have rallied outside the state capitol in Trenton and expressed their fear and anger online. Supporters say it will be next to impossible to replace the mental house services it offers for free, including in the areas of sexual assault awareness, work and college readiness, teen parenting and LGBTQ support.

The program operates in nearly 100 of the more than 500 school districts in New Jersey and serves an estimated 25,000 to 30,000 students. After its inception more than 30 years ago, the program has been recognized nationally for what was seen as a simple innovation: operating inside schools and offering counseling and resources that students might not otherwise access.

Melda Grant, coordinator of the program in Trenton, said the office was already busy last week when students came to pick up Chromebooks for remote learning. One student whose father had recently died sought counseling, while another who was pregnant needed assistance.

“Without this program, our students would have to learn to navigate systems in the community, and I don’t know that they have that self-efficacy and confidence,” Grant said.

New Jersey is facing a $5.7 billion shortfall in its upcoming budget, worsened by a decline in revenue amid the coronavirus pandemic. Gov. Phil Murphy, a Democrat, has proposed about $1.25 billion in cuts, including nearly $12 million for the school-based programs. The state would also lose federal matching funds for the programs.

With opposition mounting, Murphy suggested this week the initiative could be restored in the budget.

“This is one that I think there’s a broad agreement and support to try to find a way to get back in,” Murphy said during his monthly radio show. “I’ve just got to make sure we have the money to pay for it.”

A spokeswoman for the governor’s office referred questions to the Department of Children and Families, which said Friday that “any reduction is painful” but all state agencies have had to find areas to cut.

Those calling for youth services programs to be saved have found backing from both Democratic and Republican state lawmakers who support a bipartisan resolution to restore funding. State Sen. Anthony Bucco, a Republican, said mental health counseling is needed even more now for children after “months of social isolation, separation from their friends and the stress of starting a new school year with the education landscape constantly changing.”

The governor’s budget proposal allocates $45 million to another mental health and behavioral program, the Children’s System of Care.

“In these tough budget times, the department feels that the Children’s System of Care — while not located in schools — can provide youth and families with an array of in-home, in-community and out-of-home supports,” said Nicole Brossoie, a spokeswoman for the Department of Children and Families, in an email.

Funding shortfalls blamed on the pandemic have forced other states, such as North Carolina, to weigh whether they can afford school-based mental health programs as well.

While program directors throughout New Jersey said out-of-school programs are important and can also benefit from more money, they are not as accessible to all students.

“In-home therapy can work if everyone in the house buys in,” said Mariam Gerges, director of the School Based Youth Services Program at Dwight Morrow High School in Englewood, a suburb of New York City. “But what if the parents are working two jobs? When is the family therapy going to happen?”

Children can be reluctant to speak to a therapist with their parents or they may live in a home where abuse or other disruptions are occurring, making it even more important to have a safe space at school where counselors can reach students who might otherwise suffer in silence, Gerges said.

More than 560 students at Dwight Morrow meet with a clinician, youth development specialist or college readiness expert each year, and about a quarter of students receive mental health services through the program. Gerges said the strain of the pandemic has only exacerbated feelings of anxiety and depression.

For students at the high school, which has a majority Black and Latino population and where about half qualify for free or reduced lunch, the program is “a lifeline,” Gerges said, recounting stories of students who were saved from sexual abuse, suicide and even human trafficking.

But the program, known by students at Dwight Morrow as The ZONE, also tackles issues on a smaller scale, like befriending students who are struggling socially and feeling alone.

“I can’t tell you how many times we’ve gone in the lunchroom and said to someone, ‘Why don’t you come and eat lunch with us?'” Gerges said.

Several students referred to their School Based Youth Services Programs as “second homes.”

Lauren Blann, a mother in Brick Township, along the Jersey Shore, applauds the program at her 12-year-old son’s middle school for being a salvation for him during the school year.

She said her son, Trevor, who has attention deficit hyperactivity disorder and is high-functioning on the autism spectrum, has had difficulty in school and with making friends, but the therapist he sees has been “life-changing.”

“He told me yesterday that school is the hell of his existence,” Blann, a pediatric nurse practitioner, said. “It breaks my heart.”

Now, with the program appearing to near its end, Blann said her son has already threatened to stop going to classes; his middle school is doing both remote and in-person learning.

“He stood in my room last night in tears,” Blann said. “He said to me, ‘I’m losing the one person who actually listened to me and went to bat for me in school.'”

Blann, looking for support, joined hundreds of other parents, students and educators during a virtual rally this week. She explained her son’s journey and hinted at her fears for his future without the program.

“My son’s life is worth more than a line item on the budget,” she said.

If you don’t file tax returns, the IRS could still owe you a $1,200 stimulus check. How to claim it