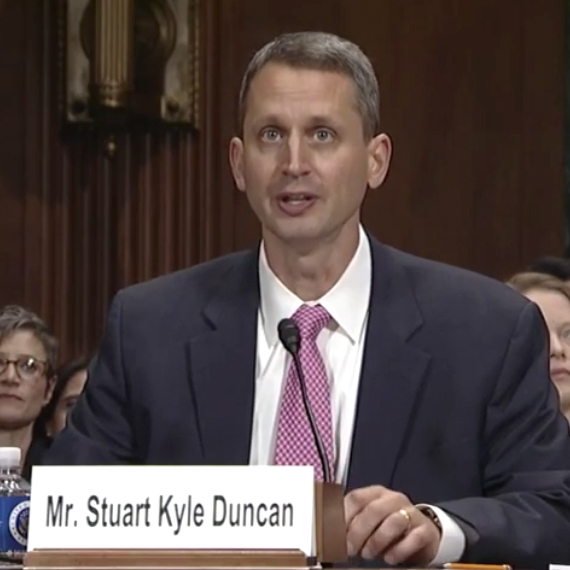 “This list is teeming with individuals who have alarming anti-LGBTQ and anti-civil rights records, which should be disqualifying for any judicial nominee, let alone a nominee for the Supreme Court,” Sharon McGowan, legal director for Lambda Legal, said in a statement, characterizing many of the potential nominees as “dangerous, ultraconservative ideologues.”

The Human Rights Campaign, the country’s largest LGBTQ advocacy group, called the 20 names a “wishlist” from conservative groups that have a “record of hostility towards progress, tolerance and equality.”

“If the past is prologue, he may once again nominate people who would deny legal protections for LGBTQ people, take away the health care provided by the Affordable Care Act, undermine the fundamental right to vote, erode core civil rights laws, and fail to value the lives, needs and Constitutional rights of the LGBTQ community,” the group’s president, Alphonso David, said in a statement.

When asked about assertions that the names on the shortlist are anti-LGBTQ, the White House broadly defended the president’s record on judicial appointments.

“President Trump has an unmatched record of appointing judges who believe in applying the Constitution as written, not legislating from the bench,” White House spokesperson Judd Deere told NBC News in an email. “Once again, the President is being transparent with the American people about the qualifications he considers paramount and who he would consider for a seat on the High Court to ensure this exceptional nation built on the rule of law continues for generations to come.”

Those qualifications, which were mentioned along with the president’s additional list of potential high court contenders, include a commitment to “protect life,” “protect religious liberty,” “protect the 2nd Amendment” and “protect our borders.”

McGowan said the sheer number of people on Trump’s running list of over 40 potential Supreme Court justices “whose records are replete with anti-LGBTQ bias is both staggering and terrifying.”

Among the newly added names is Noel Francisco, who served as U.S. solicitor general from 2017 until earlier this year. McGowan said the Trump-appointee drove an “anti-LGBTQ agenda” in that role which included submitting a Supreme Court brief asserting that gay workers are not protected by federal civil rights law.

Also on the list is Lawrence Van Dyke, who currently sits on the 9th U.S. Circuit Court of Appeals. During a Senate Judiciary Committee hearing last year ahead of his 9th Circuit confirmation, Van Dyke broke down in tears when confronted with a scathing letter from the American Bar Association that deemed him “not qualified” and questioned his ability to treat LGBTQ litigants fairly. As solicitor general of Montana, a role he held from 2013 to 2014, Van Dyke argued against same-sex marriage in two cases and in favor of allowing photographers to deny wedding services to gay couples in another.

Another name causing “deep concerns” for LGBTQ advocacy groups, including Lambda Legal, is Allison Jones Rushing, who currently serves as a judge on the 4th U.S. Circuit Court of Appeals. One reason for the concern is the Trump-appointed judge’s ties to Alliance Defending Freedom, a legal nonprofit that the Southern Poverty Law Center has deemed a “hate group” for its espousal of beliefs such as the criminalization of homosexuality, legislation to restrict transgender people’s access to sex-segregated facilities and support of businesses to deny service to LGBTQ people.

A number of the newly added names to Trump’s shortlist — many of whom Trump previously appointed to lower courts — have already “lived up to the worst expectations” of LGBTQ advocates, according to McGowan.

For example, Trump-appointed Judge Stuart Kyle Duncan, who currently sits on the 5th U.S. Circuit Court of Appeals, garnered national attention earlier this year when he refused to use a transgender defendant’s chosen pronouns and dismissed the broader concept of gender identity.

“He even went so far as to say it was inappropriate to refer to a transgender person by their [preferred] pronouns,” McGowan said.

Prior to his 5th Circuit confirmation, Duncan was part of the legal team that represented Virginia’s Gloucester County School Board in its case against Gavin Grimm, a transgender high school student who was unable to use the restroom that aligned with his gender identity. And in 2014, he represented Louisiana in its bid to uphold the state’s ban on same-sex marriage.

Another 5th Circuit judge on the shortlist, James Ho, ruled against a transgender inmate seeking to undergo gender reassignment surgery in prison in December. McGowan called Ho “one of the most anti-LGBTQ judges on the court of appeals.”

Some of the most well-known additions to Trump’s shortlist include conservative Republican senators Tom Cotton of Arkansas, Ted Cruz of Texas and Josh Hawley of Missouri, as well as former U.S. Solicitor General Paul Clement, who argued in favor of the Defense of Marriage Act before the Supreme Court in 2013 on behalf of Congressional Republicans.

According to a 2019 report from Lambda Legal, eight of 12 appeals courts — which sit just below the Supreme Court in the judicial hierarchy —are now composed of more than 25 percent of Trump appointees.

Many of Trump’s appointments have provoked criticism from gay and civil rights advocates — a third of the more than 50 circuit court judges nominated by Trump since he took office have a “demonstrated history of anti-LGBTQ bias,” according to the report. This “threatens to do lasting damage to the civil rights of LGBT people,” the report states.

The next appointment to the high court could shape the future of LGBTQ rights for decades. In June, the Court delivered a landmark ruling for LGBTQ workers, finding that Title VII of the 1964 Civil Rights Act protects them against discrimination on the basis of sexual orientation and gender identity. One of Trump’s high court appointees, Gorsuch, sided with the majority, while Kavanaugh voted against the broader interpretation of Title VII.

“The impact that another anti-LGBTQ nominee could have on the Supreme Court would be catastrophic,” McGowan said.

The court, currently divided 5-4 between conservatives and liberals, will hear a key gay rights case in the fall. In Fulton v. The City of Philadelphia, the court will decide whether faith-based child welfare organizations can reject same-sex couples and others whom they consider to be in violation of their religious beliefs.

Jogging when you're black – the calculations you have to make