Olivia Culpo’s younger sister Sophia, 23, puts her assets on display in a barely-there red bikini while at the beach with friends

On Monday the lookalike younger sister to model and former Miss Universe winner, Olivia, 28, was spotted enjoying her day at the beach as she stunned in a red bikini while in Venice, California.

The 23-year-old aspiring model and influencer looked flawless as she descended upon the ocean with friends in an attempt to beat the Los Angeles heat. 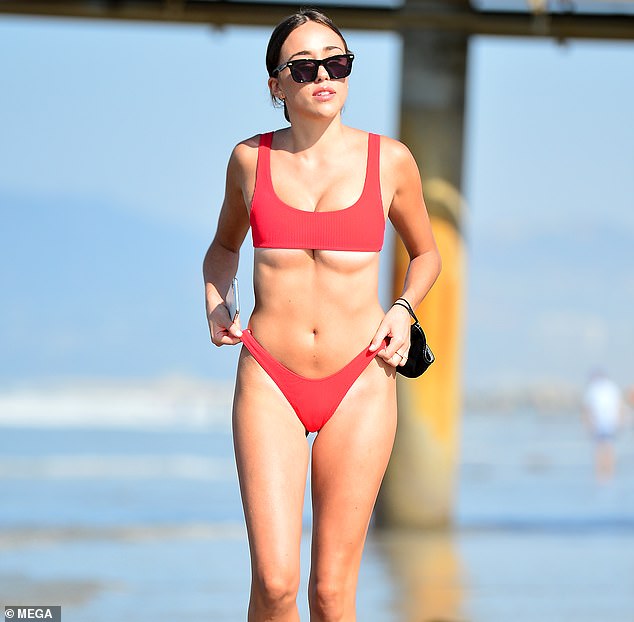 Redhot: Sophia Culpo, 23, the lookalike younger sister to Olivia Culpo, put on quite the display as the aspiring model stunned in a tiny red bikini while hanging with friends at the beach in Venice

Sophia looked fresh out of Baywatch as she put on quite the eye-popping display while dipping her toes into the water.

The brunette beauty sported a red high rise bikini as she enjoyed the pacific ocean, her tiny top rising up to reveal a hint of underboob and her flat stomach.

The former college student’s skimpy bikini put her ample assets on display, the tiny bottoms hitting just above her hips as she flashed a bit of her toned backside. 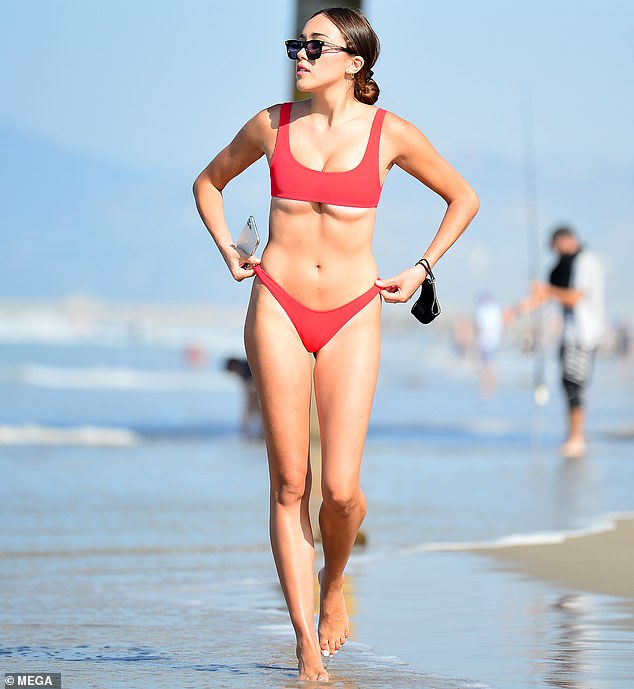 Baywatch: The brunette beauty who hails from Rhode Island adjusted her high rise bikini as she flashed a bit of underboob while walking in the water 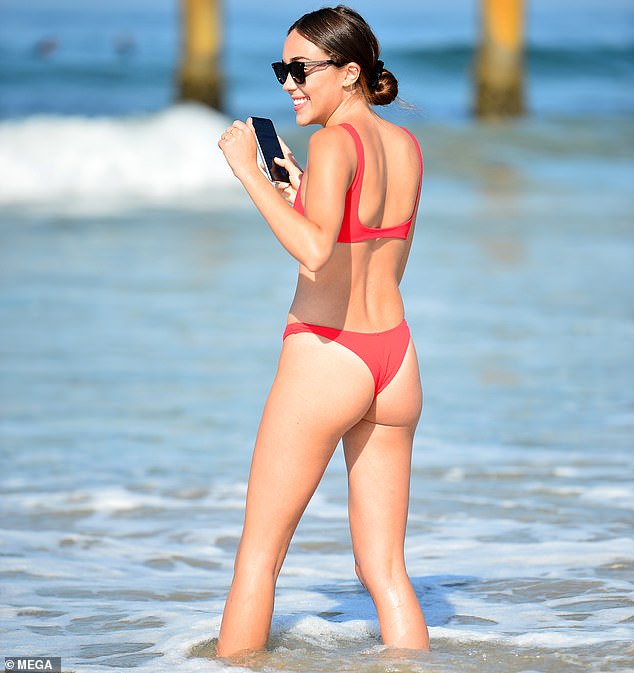 Happy: The 23-year-old stunner grinned as she basked in the ocean while rocking a low bun and a pair of sunglasses 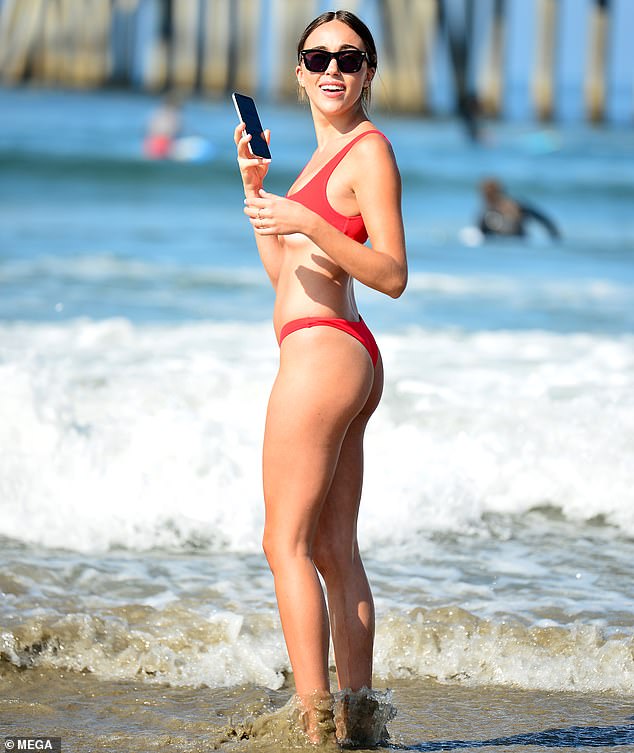 Cheeky: Sophia showed off her toned backside in her high rise bikini as she looked the spitting image of sister Olivia

As she cooled off in the water, she smiled while grasping her phone all the while showing off her incredibly toned body.

For her day at the beach the stunner opted for a natural look, tying her short brown locks into a low bun as she rocked a pair of black sunglasses and enjoyed herself.

Sophia made sure to keep a mask on hand as she tied a black face covering around her wrist to protect herself.

The Rhode Island native recently relocated to California as she has been spending part of her quarantine in Los Angeles with her sister Olivia. 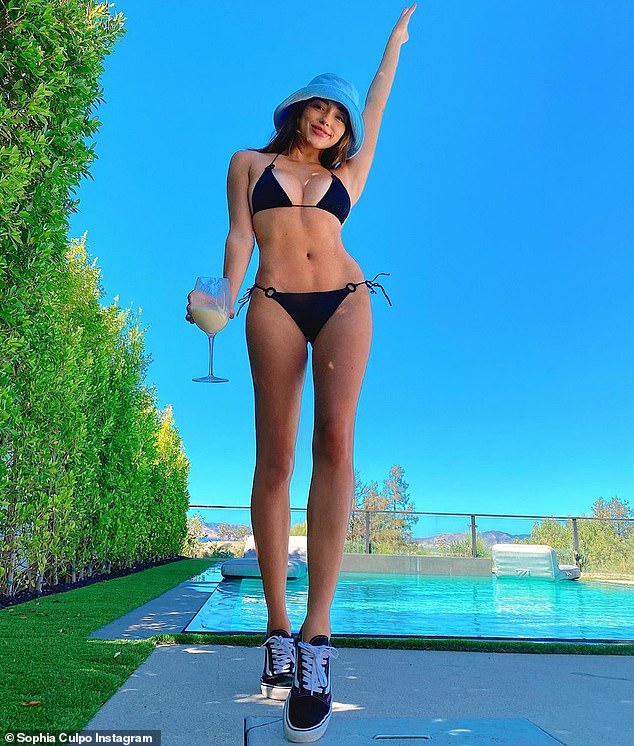 Quarantine: The former college student has been spending time with her sister Olivia at her Los Angeles residence frequently appearing on her social media as the two quarantine together 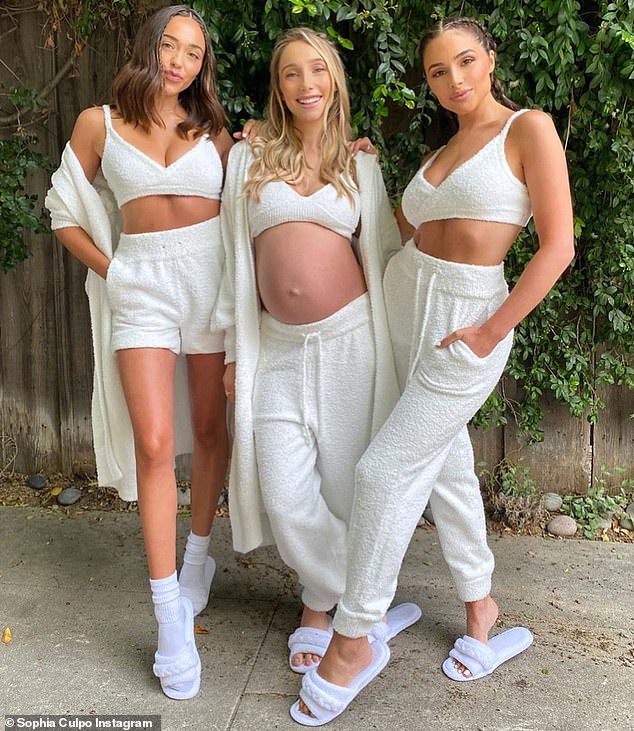 In the family: Sophia poses with her sisters Aurora and Olivia in matching white athleisure while in Quarantine

The former Boston University student who studied nutrition is following in her sister’s footsteps, as she pursues a career in modeling and influencing.

The bombshell currently boasts 114,000 Instagram followers and counting, as she continues to look more and more like her famous older sister everyday.

Sophia is the youngest of the Culpo clan having four other siblings Aurora, Olivia, Gus and Peter, with Olivia being the most notable.

Olivia first shot to fame as a pageant girl after winning the coveted title of Miss USA and then Miss Universe in 2012. 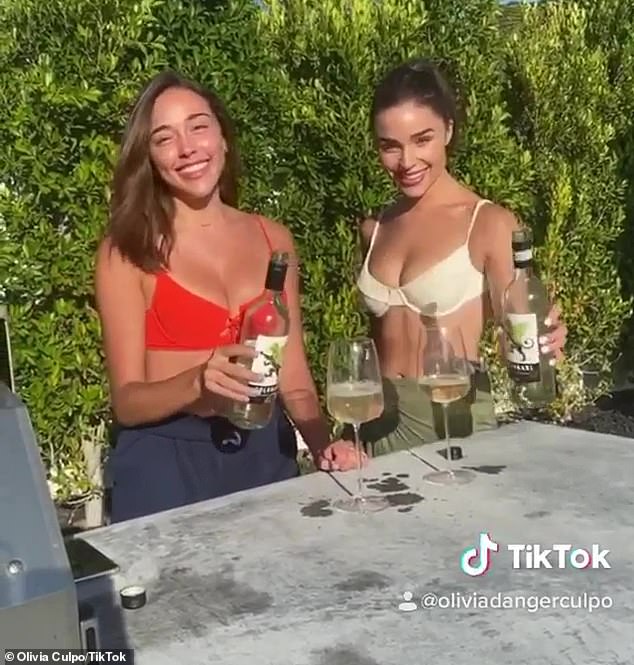 Sisters: Olivia and her sister Sophia play a drinking game while quarantining together in Los Angeles

The famous brunette model has been linked to a slew of athletes and is currently dating NFL player Christian McCaffrey.

Sophia has not been publicly linked to anyone, though it seems as if she is career driven at the moment.

The up and coming model currently has partnerships with brands like Bare Minerals and Califia Farms.

Netflix woos Japan with new original series about a reporter