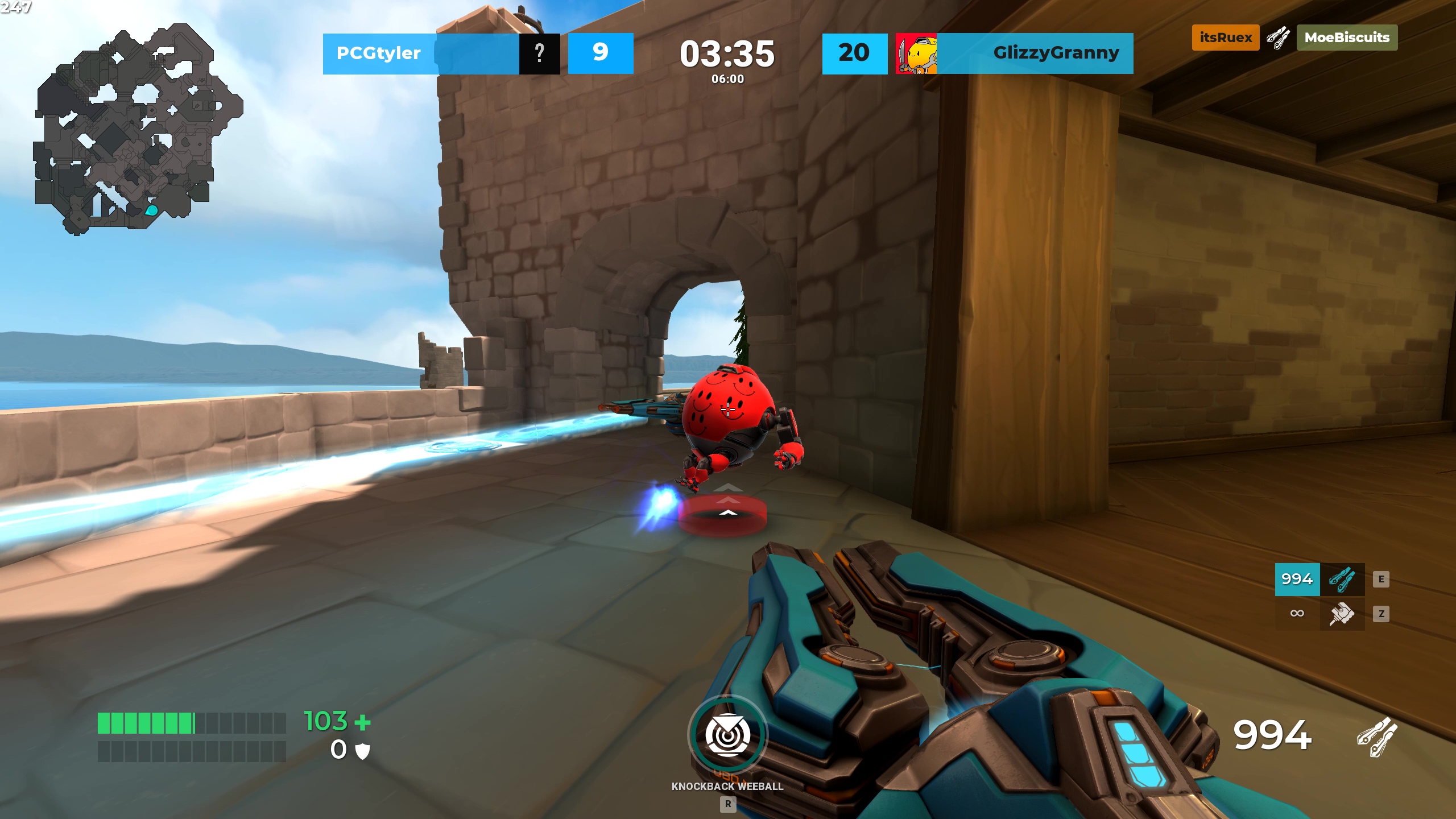 Released on the Epic Store this week, Diabotical is a free-to-play arena shooter in the style of Unreal Tournament and Quake—the maps feature jump pads, elevators, and portals, and there are machine gun, shotgun, rocket launcher, lightning gun, plasma gun, and railgun equivalents. One difference: Everyone in Diabotical is an egg-shaped robot. No headshots here, only shellshots.

I played a few rounds of Diabotical’s free-for-all mode this morning and it was fun, but I was really just being polite and trying the standard experience before switching to what I really wanted to play: instagib. Like in Unreal Tournament, instagib means everyone gets a one-hit-kill hitscan gun (a gun that hits whatever’s under your crosshair when you fire, which is why Diabotical calls it the ‘Point’n’Click Rifle’). You can get a similar experience in one of my favorite games, Ratz Instagib.

While the shooting in instagib modes is always point-and-click, games vary when it comes to the details. As is tradition, hopping and strafe jumping in Diabotical makes you go faster, but it also includes a dodge move bound to Shift by default. It’s like the dodges in Unreal Tournament 2K4, except you can’t dodge off of walls. I used it frequently, as the eggbots strafe fairly slowly and you can’t redirect your momentum as easily as you can in Ratz.

The reloading delay is also much longer in Diabotical than it is in Ratz, and a little longer than it is in UT2K4, giving it a unique pace. So far, I’ve found that even with the slower firing rate, one-on-one dances tend to resolve more quickly in Diabotical than they do in Ratz, where the character models are speedier and more compact. I feel like my movement has to be more methodical in Diabotical, whereas I try to be erratic in Ratz. I’m not sure which style of instagib I prefer yet.

One thing I prefer about Diabotical is how you gain elevation. In Ratz, you can launch yourself into the air by using your railgun’s alt-fire while aiming at the ground. It’s basically rocket jumping without a rocket launcher. In Diabotical, you have an unlimited supply of grenades (there’s a brief cooldown after each throw) that can launch you or an opponent into the air. It feels pretty good to pop an enemy into the sky before shooting them.

Ratz might remain my preferred instagib shooter in the end, but Diabotical is free and people are playing it, which are substantial marks in its favor (Ratz doesn’t have much of a population these days). Plus there’s a whole regular arena shooter that I’ve mostly ignored, with team modes, ranked play, and a server browser. And like other modern competitive shooters, Diabotical is very customizable—don’t let the too-high mouse sensitivity and default crosshair in the video above fool you. That was pre-tweaking.

I’m don’t know if Diabotical will be the big arena shooter revival that Quake Champions hasn’t been, but its creators at The GD Studio stand more of a chance than anyone else I’m aware of. Rocket Arena didn’t do anything for me.

You can download Diabotical from the Epic Store which, yes, is the only place it’s available for now.

New Cyberpunk 2077 Gameplay Shows Off New Porsche, Ability To Summon A Car Like Roach In Witcher 3

Frog Fractions DLC gets a big pile of secrets and achievements

Where Is Our NHL 21 Review?

Census Bureau needs outside help to save the 2020 census from political meddling, experts say