Restaurants now banned from providing dine-in services after 6 p.m. will be allowed to serve customers until 9 p.m. starting Friday. Businesses such as cinemas, beauty salons and some outdoor sports venues will be allowed to reopen, and residents will no longer be required to wear masks when exercising outdoors or while in country parks.

“Under the new normal, it is not possible for us to wait until there are no more local cases before relaxing the social distancing measures,” Sophia Chan, Hong Kong’s health minister said in a news conference on Tuesday.

The semi-autonomous southern Chinese city had seen a surge in coronavirus infections in July, leading the government to implement its toughest social-distancing measures yet, which included limiting public gatherings to two people.

Since then infections have gradually dwindled, with the city reporting just nine infections as of Monday, the first time in more than a month that cases have fallen to single-digits. Hong Kong has recorded 4,692 infections, with 77 deaths.

Hong Kong will implement voluntary, universal community testing for up to two weeks from Sept. 1 to detect asymptomatic patients.

HERE’S WHAT YOU NEED TO KNOW ABOUT THE VIRUS OUTBREAK

— Oil and gas operations, government facilities and others allowed to bypass environmental rules in pandemic

— Biden, Harris to get routine virus testing as in-person campaigning expected to increase

BERLIN — Germany is warning against travel to the Paris region and part of southeastern France as coronavirus infections rebound.

The warning against nonessential travel issued by the foreign ministry on Monday evening came as Germany’s national disease control center added the Ile-de-France and Provence-Alpes-Cote d’Azur regions to a growing list of “risk areas.”

The list currently includes most of the world outside the European Union. Inside the EU, it now includes all of Spain apart from the Canary Islands, parts of Croatia, Bulgaria, Romania and Belgium, and the two French regions. Luxembourg was recently dropped from the list.

People arriving from Germany are required to undergo virus tests and self-quarantine until the results arrive.

NEW DELHI — India has reported more than 60,000 new infections in the last 24 hours, taking the country’s total to 3.17 million.

The Health Ministry on Tuesday also reported 848 deaths in the past 24 hours, taking total fatalities up to 58,390.

Meanwhile, India’s recovery rate has reached nearly 76% as more than 2.4 million people affected by the virus have been discharged from hospitals. The Health Ministry said that 66,550 patients — the highest in a day — recovered from the virus in the last 24 hours.

The Health Ministry said the country’s COVID-19 tests per million has risen sharply to 26,016 as cumulative tests surged to nearly 36 million.

In June, India began using cheaper, faster but less accurate tests to scale up testing. Authorities have rationed the use of the more precise molecular tests that detect the genetic code of the virus. Nearly a third of the tests India is using now are the less accurate ones that screen for antigens, or viral proteins. They require frequent retesting, which isn’t always happening.

UNITED NATIONS — The United Nations chief says the tourist industry has been devastated by the COVID-19 pandemic, with $320 billion lost in exports in the first five months of the year and over 120 million jobs at risk.

Secretary-General Antonio Guterres said in a policy briefing and video address released Tuesday that tourism is the third-largest export sector, behind fuels and chemicals, and accounted for 7% of trade last year.

“It employs one in every 10 people on Earth and provides livelihoods to hundreds of millions more,” he said. “It boosts economies. … It allows people to experience some of the world’s cultural and natural riches and brings people closer to each other, highlighting our common humanity.”

But the U.N. chief said that in the first five months of 2020, because of the coronavirus pandemic, international tourist arrivals decreased by more than half.

Guterres said the tourism impact of COVID-19 has been a “major shock” for richer developed nations “but for developing countries, it is an emergency, particularly for many small island developing states and African countries.”

Tourism for some of those countries represents over 20% of their GDP, he said.

SEOUL, South Korea — South Korea is closing schools and switching back to remote learning in the greater capital area as the country counted its 12th straight day of triple-digit daily increases in coronavirus cases.

Education Minister Yoo Eun-hae said Tuesday that at least 193 students and teachers were found infected over the past two weeks in the Seoul metropolitan region, where a viral surge has threatened to erase the country’s hard-won epidemiological gains.

Yoo said most children at kindergartens, elementary, middle and high schools will receive online classes at least until Sept. 11. High-school seniors will continue to go to school so their studies are not disrupted ahead of the crucial national college exams.

The country delayed the start of the school year for weeks because of an outbreak in the southeast in spring before proceeding with phased reopenings beginning in May.

BEIJING — Beijing universities are preparing to administer virus tests to students returning to the city’s campuses.

The cost of testing all 600,000 students will be born by the universities themselves, according to the Beijing Municipal Education Commission.

University classes are scheduled to begin Sept. 9. Roughly 75 percent of Chinese students in lower grades returned to class as of last month, many on staggered schedules. The rest are expected to return by this week or on Sept. 1.

China’s National Health Commission on Tuesday reported no new local infections for a ninth straight day and said 14 new cases were found in travelers arriving from abroad. The northwestern city of Urumqi, the center of China’s most recent major outbreak, was relaxing restrictions on some residential compounds after several days of no new local infections.

MELBOURNE, Australia — Australian hot spot Victoria state has recorded an increase in new coronavirus cases, although health authorities are confident infections are continuing to trend down.

Victoria’s Health Department on Tuesday reported 148 new COVID-19 infections in the latest 24-hour period and eight deaths. Victoria reported 116 new cases and 15 deaths on Tuesday. That was the lowest daily tally of new cases since 87 were reported on July 5. The daily count has been as high as 725 news cases in early August.

State capital Melbourne is around half way through a six-week lockdown. 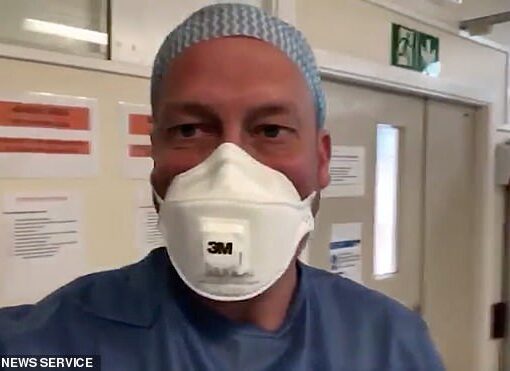 Shocking figures show more than 1.2 million people in the UK are estimated to have an eating disorder, and hospital admissions for […] 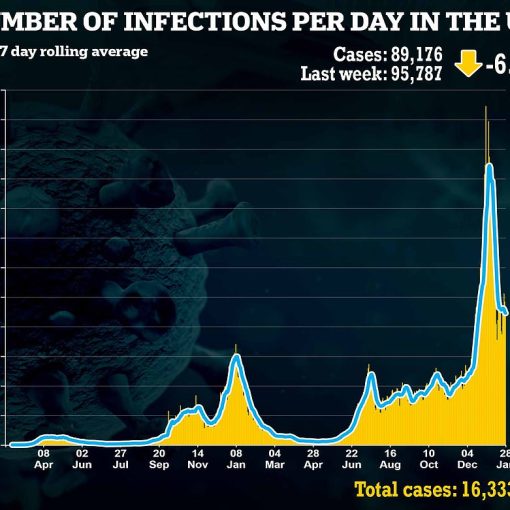 Daily Covid cases, deaths and hospital admissions were down across the UK today as the country’s Omicron wave receded. Government dashboard data […]