Police have caused outrage by asking topless female sunbathers to get dressed on a beach in the south of France.

Two gendarmes in Sainte-Marie-la-Mer, 70 miles south of Montpellier, asked three female sunbathers to put their tops on last week after a holidaymaker complained.

The move caused a public outcry, with politicians from the centre, left and right uniting in condemnation – with one branding it a ‘threat to our culture’. 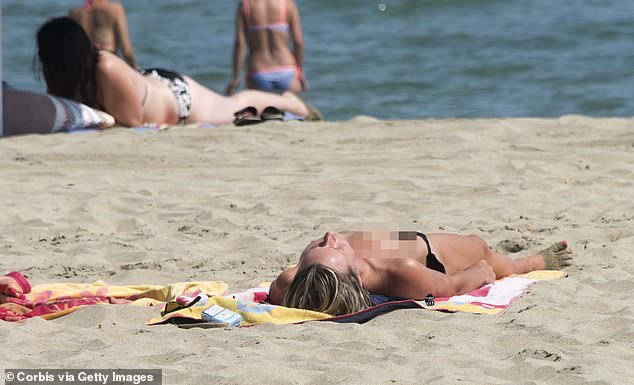 Gendarmes have sparked outrage in France after asking three women who were sunbathing topless to cover up, prompting a politician to call it ‘a threat to our culture’ (file image) 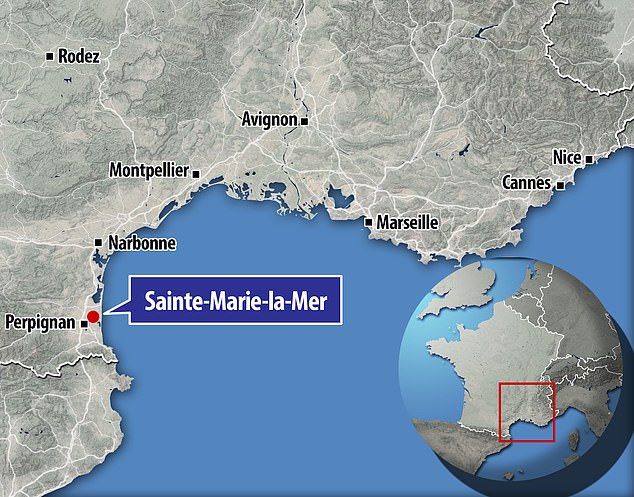 Topless sunbathing first gained a foothold in France in the 1960s, as second-wave feminism swept through Europe and women demanded the same right to tan their upper bodies as men.

Images of Brigitte Bardot sunbathing topless on the Cote D’Azur the same decade helped to make the gesture fashionable, while denunciations by the Vatican and Spanish church only increased its appeal.

But it was in the 1970s, after a conservative attempt to ban the practice was defeated, that it became a point of national pride.

Today, the right of women to sunbathe topless on beaches is seen as a sign of equality between the two sexes, and a sign of France’s progressive attitudes.

In the latest incident, witness Marie Hebrard told Channel 3 that she was sunbathing Sainte-Marie-la-Mer on August 20 when she saw the gendarmes approach a pair of female sunbathers.

She said the officers had a short conversation with the women, who were left looking embarrassed and searching around for their bikini tops.

The officers – one male and one female – then moved off down the beach, she said, before accosting another woman who was lying further along the sand.

Ms Hebrard said she confronted the officers, who told her to ‘move along’ before leaving the beach a short time later.

Local police chiefs later confirmed the incident, saying that the officers acted after a female holidaymaker complained because she had two children with her – and didn’t want them witnessing it.

As the news spread, it drew condemnation from all quarters including from an MP in the ruling La République en Marche party.

Aurélien Taché denounced the incident as ‘scandalous’, adding: ‘When will the state stop trying to give moral lessons, particularly to women? Everyone is free to dress or undress as they like.’

Christine Pirès Beaune, an opposition socialist MP, added that she was ‘fed up with all these puritans and moralising people’.

Finally, Jean Messiha, a prominent figure within the far-right National Rally party, branded the incident ‘a threat to French identity’. 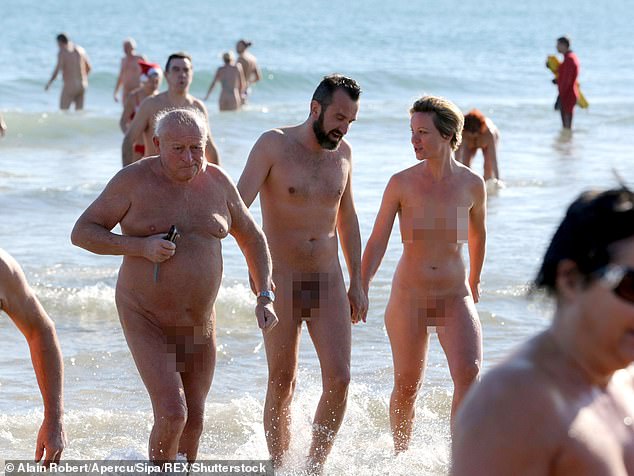 There is no law against topless sunbathing or swimming on beaches in France, unless the act is prohibited by a specific local law.

Councillors in Sainte-Marie-la-Mer have confirmed that no such law exists, and police were not given any orders to stop topless sunbathers.

Police chiefs also clarified that there is no law forbidding the practice, saying that officers had attempted a ‘clumsy resolution’ after getting the complaint.

They said the sunbathers were not ordered to cover up, but politely asked to cover themselves at the request of the other family.

It comes just a day after an outbreak of coronavirus at a nudist resort just 45 miles from the beach, which prompted warnings from health chiefs that everyone is required to wear face masks.

At least 95 people at the resort of Cap d’Agde, 30 miles south of Montpellier, have tested positive for the virus so far – with more results due this week.

That is in addition to an estimated 50 people who reported falling ill after returning home from the holiday village.

France made masks compulsory in all indoor spaces on July 20, with only very limited exceptions.

Medics carried out 194 tests on visitors who volunteered at the resort on Monday last week, with 38 coming back positive, the regional health service said.

Another 244 tests were then carried out on Wednesday, with 57 positive.

She's 33 and has battled Covid for months. Her struggle is a warning for young adults.

UN: Africa lost $800B in illegal transfers in recent years

Coronavirus cases plateau at average of 40,000 per day for a week