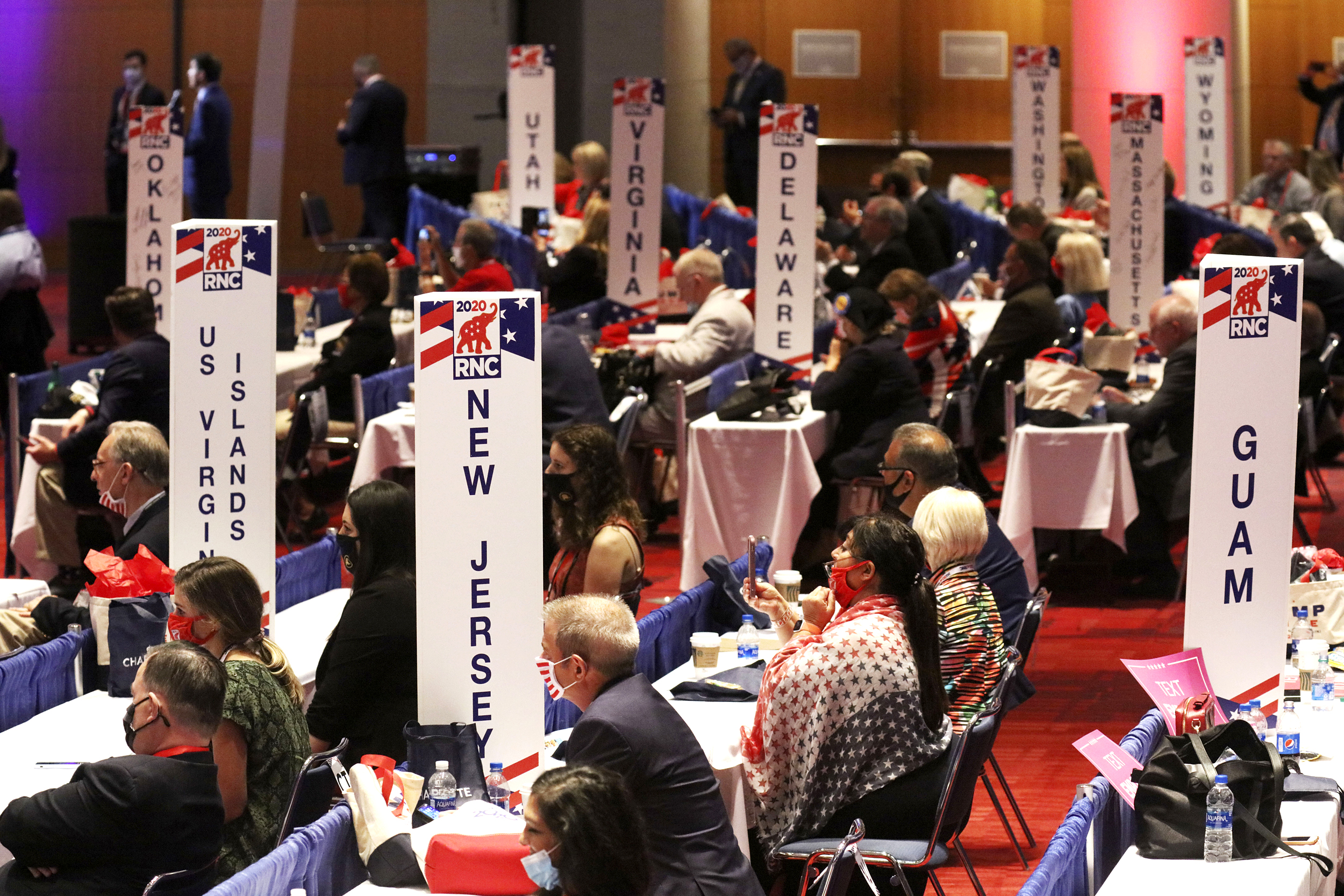 CHARLOTTE, N.C. — President Donald Trump’s campaign tried to kick-start his flagging re-election bid as the first night of the Republican convention began Monday night by touting economic accomplishments and trying to depict Democrats as a threat to America.

The backdrop for Trump’s convention: an America in turmoil. The coronavirus pandemic continues to rage after a summer punctuated by protests calling for an end to racial injustice.

The convention speakers and a series of videos lauded Trump as having saved millions of lives during the pandemic and serving as a force against protesters.

“Democrats no longer view the government’s job as protecting honest citizens from criminals, but rather protecting criminals from honest citizens,” said Mark McCloskey, who along with his wife Patricia McCloskey gained national attention when they pointed guns as Black Lives Matter protesters marching past their St. Louis home.

“So make no mistake: No matter where you live, your family will not be safe in the radical Democrats’ America,” Patricia McCloskey said. “What you saw happen to us could just as easily happen to any of you watching from quiet neighbors around the country.”

Follow the latest from the Republican National Convention in our RNC live blog.

The convention sought to depict the pandemic in an optimistic tone, detailing the response overseen by the federal government and touting medical treatments. In contrast, it showed protesters as violent and dangerous, warning Democrats would usher in more unrest.

The president enters his convention trailing rival Democrat Joe Biden in the polls, and he faces a torrent of criticism for his administration’s handling of the pandemic. This week’s convention will be his most aggressive attempt yet to turn the national sentiment in his favorite.

Trump made his first appearance of the evening in a pre-taped video from the White House where he gathered at a distance with first responders to discuss their experience with the coronavirus.

Sen. Tim Scott of South Carolina, the only Black Republican in the Senate, is expected to use his Monday night speech to try to appeal to minority voters, a group Trump has struggled with.

Scott will touch on Trump’s work on behalf of Black Americans “to clean up Joe Biden’s mess,” and how the Democrats are campaigning on a “cultural revolution” for a “fundamentally different America,” according to excerpts released by the Trump campaign.

Kirk said America was “under attack by a group of bitter, deceitful, vengeful, activists who have never built anything in their lives.”

Trump is scheduled to make an appearance every night, ending with his formal acceptance speech on Thursday, the final night of the convention. Trump is expected to make a taped appearance Monday with six hostages who were rescued during his administration, according to a campaign official.

Throughout the evening Americans from around the country shared personal stories about how Trump’s policies have positively impacted their lives.

A California educator applauded Trump for his opposition to teacher unions; a Montana woman thanked the president for emergency coronavirus loans that saved her coffee business; a West Virginia nurse praised the White House for expanding telehealth in response to the pandemic.

Democrats hosted their convention last week, conducting the event almost entirely remotely and receiving high praise for the production value. Republicans will feature taped videos, but conclude each night with a more traditional format featuring a series of speakers on a single stage.

The first night began with a series of taped speeches in an empty auditorium.

RNC Chairwoman Ronna McDaniel also sought to cast Biden as a far-left candidate and argued that much of his “radical” plans were unknown to the American public.

“If you watched the DNC last week you probably noticed that Democrats spent a lot of time talking about how much they despise our president. But we heard very little about their actual policies,” she said.

The Republicans decided to forgo a new party platform this year and instead passed a resolution to leave in place their 2016 platform.

Download the NBC News app for alerts and all the latest on the Republican convention.

Florida Rep. Matt Gaetz, one of Trump’s most fervent defenders, mocked Biden for not holding more events outside of his home during the pandemic.

“They’ll disarm you, empty the prisons, lock you in your home, and invite MS-13 to live next door,” Gaetz said. “And the defunded police aren’t on their way.”

CORRECTION (Aug. 24, 2020, 7:10 p.m. ET): A photo caption on a previous version of this article misidentified Tim Scott’s congressional position. He is a senator, not a House member.

Can you take more than one Covid-19 vaccine?

Peter King on the good, the bad and the Trubisky from a weird and wonderful week 1

Trump says he gets along with 'tougher,' 'meaner' leaders in new Bob Woodward tape