From time to time, I find small purple bruises on my forearms for no reason. They usually fade after a couple of days and I’m otherwise fit and healthy. Should I bother my GP with it?

Yes, absolutely. Any unusual changes to your body should be discussed with your doctor. More often than not, symptoms won’t point to anything sinister, but if it is something serious, the chances of effective treatment and cure are always better when a problem is detected early.

Bruising usually occurs when blood vessels are damaged by injury, causing a small bleed under the skin. Special chemicals within the blood called clotting factors ensure that the blood clots, stopping a bruise from becoming too extensive. If you start to bruise more or for no reason, it can point to an issue with your blood’s ability to clot.

Many older people suffer more bruising as a normal part of the ageing process – the skin thins as we age, it is less protective and the blood vessels beneath are more likely to be damaged by even a small knock. 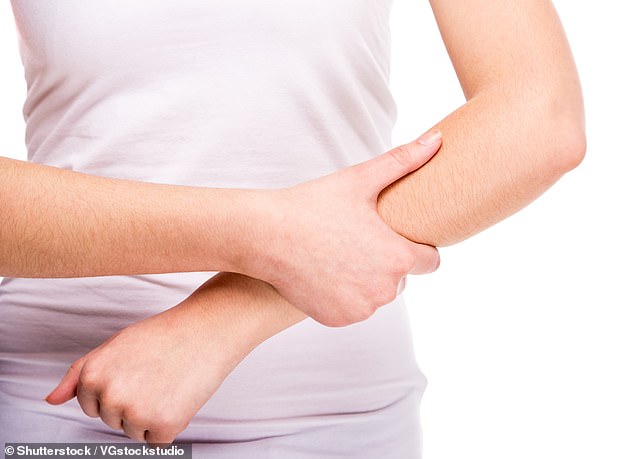 Bruising usually occurs when blood vessels are damaged by injury, causing a small bleed under the skin

Bruising can also be a side effect of many medications, particularly aspirin and non-steroidal anti-inflammatories.

But bruising can be a sign of a problem with the blood’s platelets and for this reason tests are important. Low platelet count can be caused by a variety of reasons – from blood diseases such as thrombocytopenia, to cancers such as leukaemia or myeloma.

Blood tests are also important to check for liver and kidney disease, which may also affect how the blood clots.

An urgent appointment is important, despite the pandemic.

My feet really hurt but I can’t get an appointment

Why can’t I get podiatry treatment for my corns now that service has been resumed on the NHS?

I have received many letters about the lack of podiatry appointments currently available since the easing of lockdown.

Early on in the outbreak, all routine appointments were halted because of social distancing, and many NHS staff were redeployed elsewhere.

Since appointments have started up again, it is likely to be only the most severe and urgent cases that are seen first.

For podiatry, this would be diabetic foot treatment rather than corns and calluses, which may still be on hold.

There will be a huge backlog after four months of no service, and this will be causing the delays.

Diabetes can cause irreversible damage to feet, including amputation, so these patients will be prioritised over the corns and verrucas for now.

I have developed an uncomfortable crawling sensation in my groin and although I can’t see anything, I wonder if I have threadworms, as I had a persistent bout three years ago. I’m not sexually active but I’m concerned this is something I could pass on.

Threadworms are small parasitic worms that commonly infect the bowels of children and are spread very easily. They look like 1cm-long strands of white cotton thread and can cause intense itching around the bottom, particularly at night.

Medication called mebendazole is usually very successful and can be bought over the counter, but sometimes a second dose is required two weeks later.

But this doesn’t sound like threadworms. A different parasitic infection such as scabies, which is not necessarily sexually transmitted, should be considered.

Scabies, which are a type of mites, also cause intense itching, more commonly in the lower abdomen and groin, but also in hands, feet and insides of elbows.

A GP can prescribe the right medicine for this, either an insecticide cream or solution.

It is also common to feel very itchy without any infestation. I’ve had many patients describe an unpleasant creepy-crawling feeling, when there has been nothing there at all.

This can happen after something like scabies, when that uncomfortable feeling persists. In this case, I would suggest a medicine that controls itching such as an antihistamine.

Itching can also become psychological and can persist through what we call the ‘itch-scratch cycle’: you itch because you are scratching and this repeats itself. Again, this can be treated with medicine that controls the itching long-term.

Itching can also be worsened by harsh toiletries, so I would advise using only gentle, specially formulated products for the area.

I have been experiencing incredibly painful sciatica which has worsened, triggering throbbing, pins and needles and numbness in my big toe. I’m also finding it difficult to get out as my legs ache as soon as I start walking.

This does not sound like sciatica, which is typically pain in the lower back that travels down the leg, usually on one side, but it can be both.

It is caused by a pressure on the sciatic nerve and can cause pain, pins and needles, numbness or even weakness.

DO YOU HAVE A QUESTION FOR DR ELLIE?

Dr Ellie can only answer in a general context and cannot respond to individual cases, or give personal replies.

If you have a health concern, always consult your own GP.

Usually these changes in sensation are in the back of the leg. It is also more typical for the smaller toes to be affected when the problem spreads to the foot. It is not normal for sciatica to bring on such specific big- toe symptoms.

You also say your leg swells and aches after walking.

This sounds more like the symptoms of a vascular problem inside the leg. Leg swelling can be caused simply by lack of movement or weakness, as fluid builds up with the leg.

But it can also be a sign of problems within the leg’s veins, including a blood clot.

Aching while walking can also be a sign of a separate issue known as intermittent claudication. This happens because of a problem with the arteries rather than the veins which triggers aches every time you walk – usually the pain stops when you stop and rest.

It may also be a sign of peripheral arterial disease, which occurs when your arteries narrow. You should visit your GP urgently for further investigation.

Life would be harder in a zero-Covid UK

Zero-Covid – or eliminating Covid-19 from the UK almost entirely, with barely any cases detectable – is the strategy Boris Johnson must adopt if we’ve any chance of beating the pandemic. So said the All Party Parliamentary Group on Coronavirus last week.

And it might sound desirable… but it is not only a deeply unrealistic approach, it’s harmful too, when you consider what we’d have to sacrifice to achieve it.

It would involve stricter, more frequent lockdowns, the obliteration of the economy, more delays to vital cancer treatment, less access to healthcare and crushing insecurity for all Britons.

It’s a pointless goal too. We’ve never got to zero measles or zero tuberculosis, despite successful vaccinations – and we cope just fine with the few cases that crop up every year.

There’s nothing to suggest Covid-19 wouldn’t end up following the same manageable path. We must lose the meaningless buzz-words and focus on accepting our new reality instead. It’s the most realistic, and healthiest, option.

Coronavirus was spreading in the US by December 17, study finds

Pop-up school for US asylum seekers thrives despite pandemic

Inside the Queen's £2,500 Christmas hamper – her favourite food including foie gras

Coronavirus can enter BRAIN via the nose, German research shows

Turn your Fire TV into a larger Amazon Echo Show. Here’s how