Mayor Bill de Blasio appears to have reversed himself once again, busing homeless men into boutique hotels in Brooklyn after vowing to end the program in the face of public outcry.

On Friday, at least 40 men were spotted exiting yellow buses and entering the Hotel Indigo on Abolitionist Place in Downtown Brooklyn, where a sign warns that the hotel ‘cannot accommodate reservations,’ according to the New York Post.

Many of the men carried their belongings in plastic garbage bags, and city sources confirmed that the trendy hotel is being converted into a homeless shelter. Just steps away, the Hotel Aloft was converted to a similar shelter three weeks ago, residents said.

The program reportedly costs taxpayers $175 per person each night, totaling more than $2 million a day for the some 13,000 people being housed in hotels. 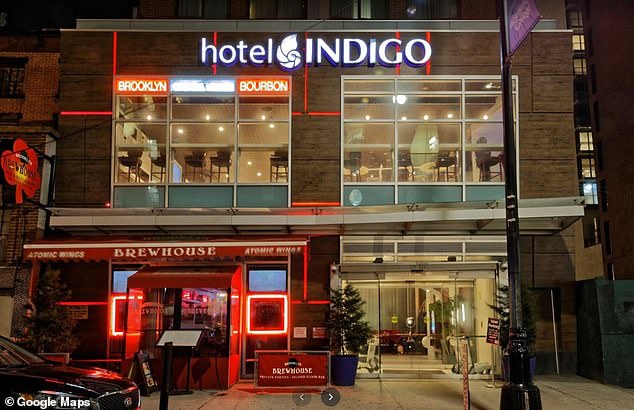 The trending Hotel Indigo is the latest New York City hotel to be converted into shelter for homeless men, after dozens were spotted being bused to the hotel on Friday 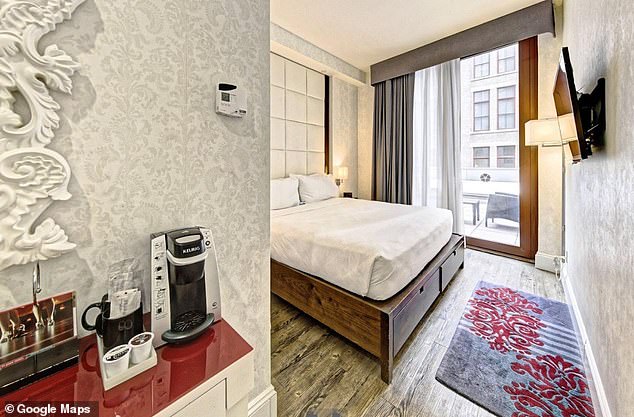 The city is reportedly paying $175 per night per person to house thousands of homeless people in hotels across the city. Above, a room in the Hotel Indigo is seen 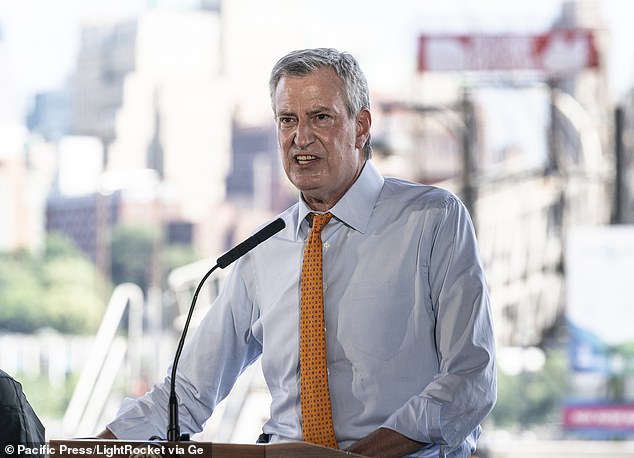 De Blasio’s hotel scheme, launched without public notice, was intended to remove people from the city’s dormitory-style shelters and reduce the risk of coronavirus outbreaks

De Blasio’s hotel scheme, launched without public notice, was intended to remove people from the city’s dormitory-style shelters and reduce the risk of coronavirus outbreaks.

But the plan faced stiff backlash, particularly on the Upper West Side, where shocked residents say their wealthy neighborhood is being overrun by open drug use, lewd displays, and brazen harassment from hundreds of homeless men being housed in three hotels there.

On Monday, de Blasio, a Democrat, vowed to end the program following outcry from the Upper West Side.

‘We’re now starting the process of reducing the reliance on hotels,’ de Blasio said at a press conference. ‘That’s the big plan is make sure we can start to get people out of those hotels, relieve some of the pressure on those communities.’

It was not clear whether the men taking up residence in the Indigo on Friday were being transferred from another hotel, from a city shelter, or were being newly enrolled in the program.

A spokesperson for de Blasio did not immediately respond to an inquiry from DailyMail.com on Saturday. 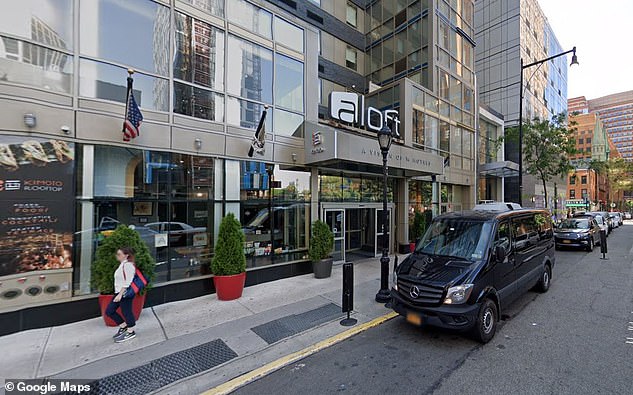 Just down the street from the Indigo on Abolitionist Place, the Hotel Aloft was converted into a homeless shelter about three weeks ago, residents say 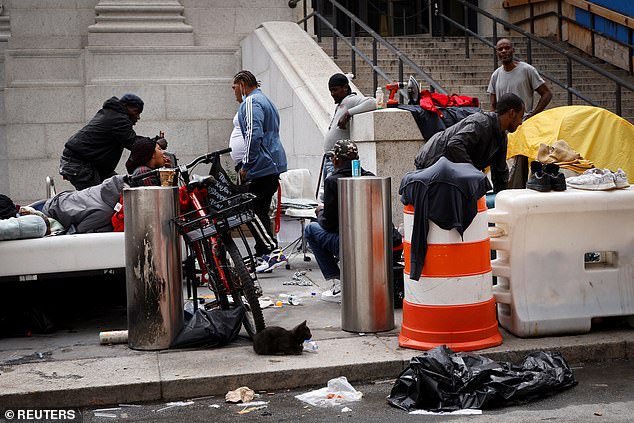 A small encampment of homeless people is pictured on a sidewalk on 8th Avenue in Manhattan next to the James A. Farley U.S. Postal Service building on Wednesday 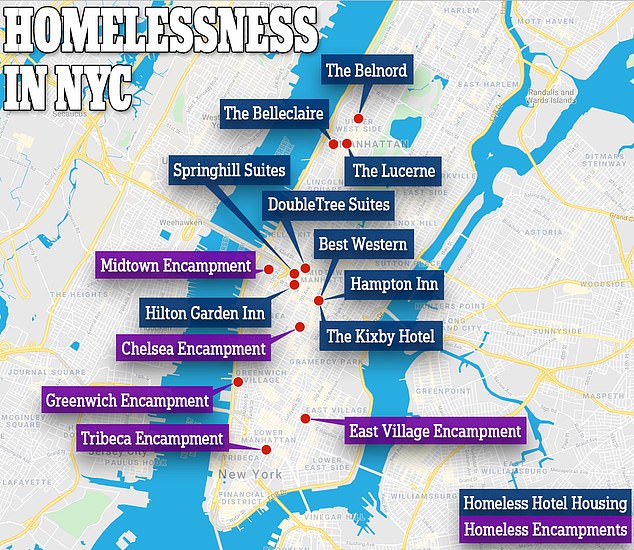 Now, residents of trendy Downtown Brooklyn say that they are already feeling the effects of the boutique hotels in their neighborhood being converted into shelters.

‘I’m no one to say where these people have to go. The only problem I have is that they’re very dirty,’ 34-year-old Belen Lopez told the Post.

‘I used to take my [2-year-old] daughter to the park here … now it’s dirty. They drink and they smoke. You can always smell the smoke every time I come out,’ said the graphic designer, who lives in a nearby luxury building.

The census tract where the two boutique hotels are located has a median income of $105,042, and median monthly rent of $2,688.

‘It’s terrible. There is trash all over the place,’ one resident told the Post. ‘This used to be a beautiful block — now it’s completely changed. It’s quite disturbing.’

Homelessness in the city has only increased since March, as the economic devastation wrought by the pandemic and subsequent lockdowns has pushed many who are suffering from poverty over the brink.

Violence surges in Downtown Brooklyn and across New York City

Downtown Brooklyn, like many parts of New York City, has also seen an alarming uptick in crime in recent weeks.

On Thursday night, a 23-year-old man was shot dead outside of a McDonald’s on Fulton Street and Flatbush Avenue, which is just a five-minute walk from the Hotel Indigo.

Police recovered a gun at the scene, which they believe was dropped by the victim. 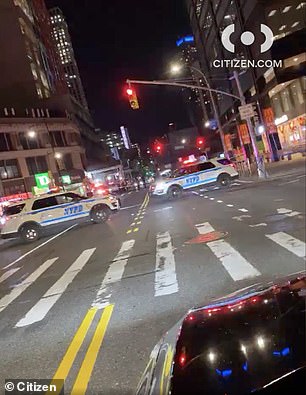 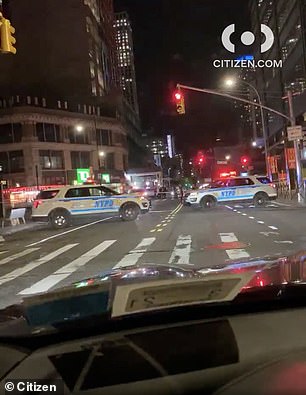 Police respond to a McDonald’s in Downtown Brooklyn, where a 23-year-old man was fatally shot at about 10pm on Thursday night

The shooter, described as a black male in his 20s standing five-foot-ten and wearing a white bucket hat and black shirt, fled north on Flatbush Avenue, and remains at large.

Across New York City, shootings continued to surge over the weekend, with one person killed and 10 injured in at least 11 shooting incidents that spanned the Bronx, Manhattan and Brooklyn.

In the Bronx, police responding to a ShotSpotter alert found Priscilla Vasquez, 25, unresponsive with a gunshot wound to the head at around 5.20am on Saturday at East Cortland Avenue and 152nd Street. She was pronounced dead at the scene.

Officials did not release details of a potential motive and had made no arrests as of Saturday morning, according to WNBC-TV. 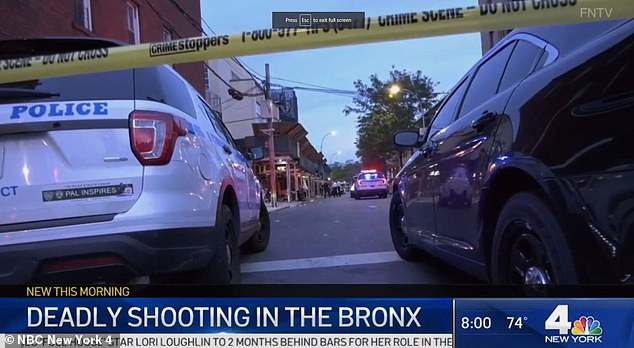 In the Bronx, police responding to reported gunshots found Priscilla Vasquez, 25, unresponsive with a gunshot wound to the head at around 5.20am on Saturday

In Brooklyn’s Coney Island, an Uber driver was shot around 10.45pm after getting into a verbal dispute with someone on a bike, police said.

The driver was shot in the torso but was able to drive away a short distance to police. Paramedics transported the 30-year-old driver to a nearby hospital.

Aviation units were called in to search for the suspect, described as a black male wearing an orange sweatshirt and black fanny pack.

Elsewhere in Brooklyn, two men ages 27 and 28 were shot in their legs and injured near 760 Park Avenue in Bedford-Stuyvesant when an unidentified gunman drove up and opened fire.

Both men were taken to Kings County Hospital and were expected to survive.

Other shootings on Friday night and Saturday morning included:

Bronx, 11.10pm: One shot. A 23-year-old man was sitting in inside a black Mercedes when a gunman walked up and shot him twice in the chest and once in the arm, according to police. The victim was transported to Jacobi Hospital and his condition was unclear.

Manhattan, 1am: One shot. A 18-year-old woman was shot in both legs near West 120th Street and Adam Clayton Powell Jr Boulevard in Harlem. She was taken to Harlem Hospital and is expected to survive. Shooter fled in black sedan.

Brooklyn, 12.55am: One shot. A 23-year-old man self-transported to Brookdale University Hospital Medical Center and said he’d been shot in his left hand.

Bronx, 12.55am: One shot. A 33-year-old man was shot in the right arm near West Burnside Avenue and Loring Place. He was taken to St. Barnabas Hospital and expected to survive.

It comes as the city endures a summer of soaring violent crime. Heat waves, high unemployment, and the grinding misery of social distancing restrictions have all contributed to an atmosphere in which tempers spin out of control, and verbal disputes between strangers often turn violent.

As well, gang violence and turf wars have contributed to the shootings, police say. In one suspected gang-related drive-by shooting in the Flatbush section of Brooklyn on Wednesday, a 33-year-old innocent bystander was paralyzed when he was struck in the spine.

Sam Metcalfe, 33, survived the shooting while an 18-year-old suspected Crips member, Malcolm Amede, died near the intersection of Ocean and Woodruff avenues in Flatbush – just south of Prospect Park. 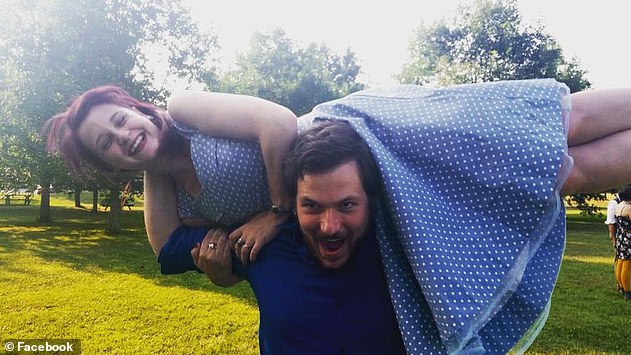 Sam Metcalfe, 33, a resident of the Flatbush section of Brooklyn, was left paralyzed on Wednesday after he was shot while walking with his wife, Sabrina (seen above with her husband in this undated file photo), as they were going to the store to buy toothpaste 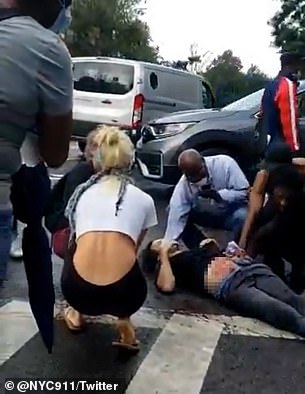 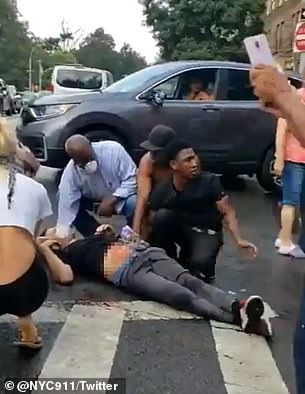 Last month, shooting incidents across the city were up 177 percent compared to last year. Murders were up 59 percent for the month, burglaries rose 31 percent, and auto thefts increased 53 percent.

The mayor has also boasted of the large number of inmates released from Rikers Island due to the pandemic, proudly declaring that city jails had the lowest inmate population since World War II.

Governor Andrew Cuomo has blamed police themselves for the rising crime, saying they have done ‘very little’ to come up with reform plans.

He also threatened to pull funding from up to 500 departments across the state if they do not have reform plans in place by April 2021.

De Blasio said on Monday that violent crime is ‘painful’ and ‘horrible’ and said that the NYPD is ‘engaging the community more deeply’ to try to stem the tide.

ALATHEA FITZALAN HOWARD: How the Queen told me she would elope for the man of her dreams

David Squires on … the Premier League returning with 2020 vision