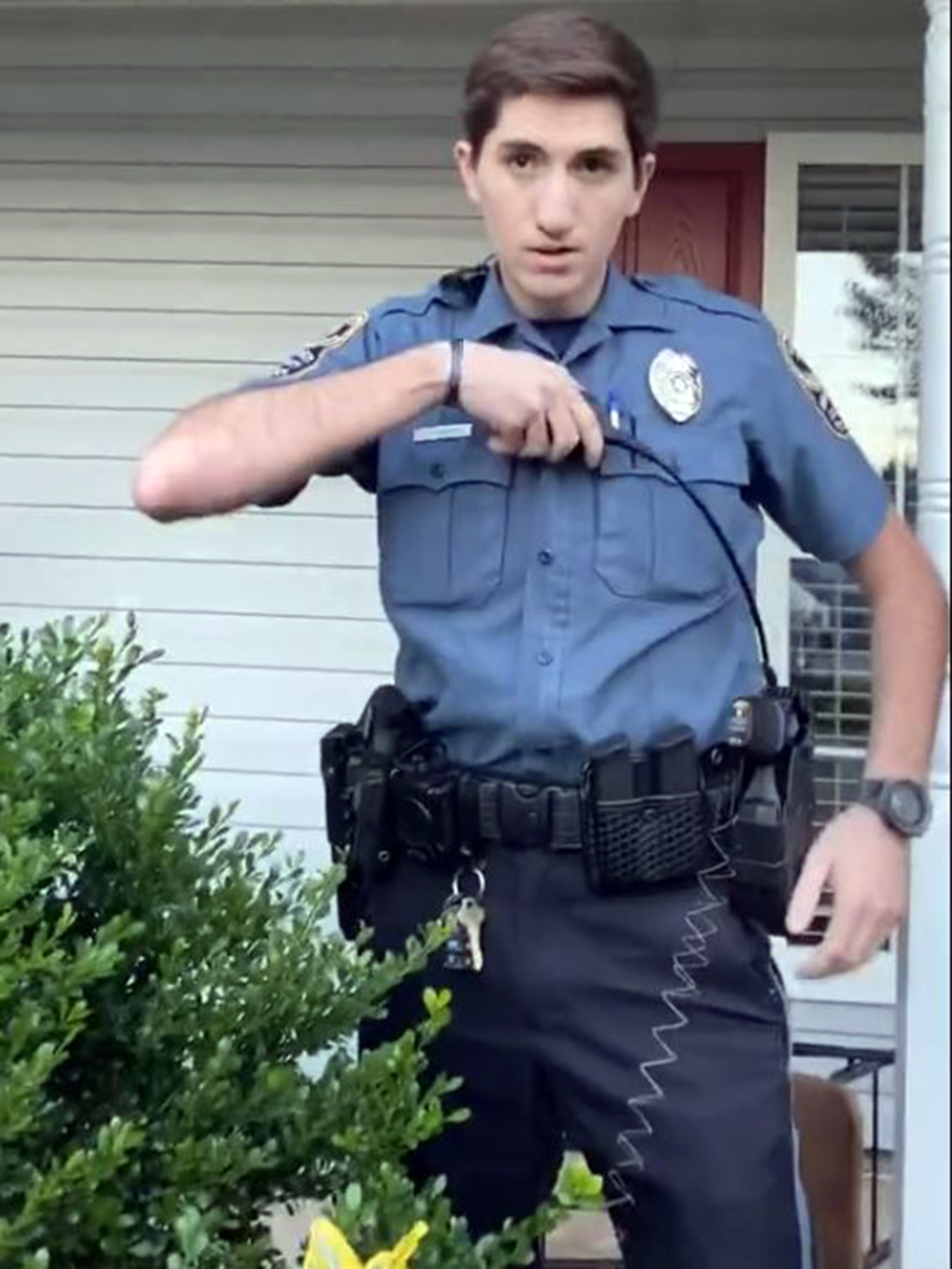 A Georgia police officer who was seen in a now-viral TikTok video using a stun gun on a Black woman during an arrest has been fired.

The Gwinnett County Police Department said in a press release that officer Michael Oxford “violated our policy and did not meet our core values” during the Aug. 18 arrest of Kyndesia Smith.

“For this reason, the employment of Officer Oxford has been terminated as of August 21st,” the police department wrote.

Oxford was at a home in Loganville, about 35 miles northeast of Atlanta, on Aug. 18 responding to a 911 call about property damage. A woman told the officer that two people had thrown a bottle at her car, threatened to assault her, and said they would beat her 9-year-old child, according to the press release.

“The incident of the bottle being thrown was captured on surveillance video,” the release said. “That video shows a woman come and retrieve the bottle from the yard before police arrived. The complainant directed the officer to the house where she believed the suspects were staying.”

When Oxford went to the home of the suspects, he recognized a person on the porch as one of those in the surveillance video, according to the release. Smith began yelling at Oxford, and the officer yelled back and told her that she could be arrested if she did not let him do his job.

The arrest was captured on cellphone video and shared on TikTok. In one video posted to the site, Smith is heard telling Oxford that she was not going anywhere.

The video content may be disturbing and includes profanities.

“You’re on our property. We did not call you,” Smith says in the video. “I’m not going anywhere.”

When the officer tries to arrest Smith, she tells him not to touch her. The officer appears to roughly grab her by the arms as several people start screaming, the video shows.

“Get on the f—ing ground,” the officer says. “Get on the ground.” Oxford is then seen using his stun gun on Smith, causing her to fall in a bush.

Another video shows Oxford trying to place Smith in handcuffs as a struggle ensues. A second officer arrives and helps Oxford arrest Smith. The videos have been viewed millions of times on TikTok.

The videos do not appear to show the events that police said occurred prior to the officer’s arrest of Smith.

Oxford wrote in an arrest report that as he walked up to the house, several people began yelling at him. He said as he tried to talk to one of the women, Smith continued to yell.

“I told Smith that she need to either quiet down or remove herself from the scene and if she did not she would be further obstructing my investigation and would be arrested,” the report states. “Smith once again continued to yell and shout in which I then told her she was under arrest.”

Oxford wrote that as he tried to handcuff Smith, she pulled away from him and he deployed his stun gun and she fell. He then tried to place her in handcuffs.

Oxford said that with the help of a second officer, he was able to get Smith in handcuffs and then walked her over to his patrol vehicle. He wrote in the report that once in the vehicle, Smith “kicked her legs towards me striking me in the head, face and shoulder areas several times with her feet.”

After Smith’s “legs and feet were clear of the door I was able to shut the door of my patrol vehicle,” securing her inside,” the arrest report states.

The police union that represents Gwinnett County officers did not immediately return a request for comment Saturday.

Attempts to find contact information for Oxford and Smith were not immediately successful Saturday.

Jail records show that Smith was charged with simple battery against an officer and willful obstruction of law enforcement. She was released on Wednesday.

It is not clear if she has a lawyer.

Oxford was initially placed in an administrative role as an internal investigation was launched into Smith’s arrest, the officer’s use of force, and his conduct. The police department said in its press release that there was “probable cause to arrest Smith for obstruction of a law enforcement officer” and that Oxford’s use of force was within the department’s policy.

The agency said, however, that it took issue with the officer’s conduct during the arrest.

“That investigation looked at whether proper de-escalation techniques were used, and whether Officer Oxford violated our policy based on the manner in which he handled the incident,” the police department said in the press release. “Our policy states that each member of this department shall consider it his or her duty to be of service to the general public and to render that service in a kind, considerate, and patient manner.”

“One of our core values is courtesy,” the release said. “We strive to conduct ourselves in a manner that promotes mutual respect with the community and our peers. The investigation in this case has shown that Officer Oxford violated our policy and did not meet our core values. For this reason, the employment of Officer Oxford has been terminated.”

Trump kept how deadly coronavirus was from his campaign, source says

Grandmother, 86, is brutally raped and beaten by attacker, 33, in India

Amazon is hiring 33,000 new employees at its Career Day