A mourner from Robert Trump’s funeral has allegedly punched a restaurant worker in the face telling them ‘you don’t know how to speak to people’ because the server told them they couldn’t fit their large party in the restaurant due to COVID-19 rules.

The unidentified attacker assaulted a server at Fig & Olive restaurant in Washington DC Friday night leaving him with a suspected broken nose, just hours after Donald Trump held a funeral service at the White House for his younger brother, according to reports from NBC.

A restaurant worker told the outlet the mourner ‘clocked [the server] right in the nose’ after he told the ‘unruly party’ there was no space for the group to dine.

Some of the people in the group were allegedly still carrying funeral programs from the White House service, the sources said.

The restaurant confirmed to DailyMail.com in a statement Saturday that one of its workers had been assaulted Friday night.

The spokesperson said they ‘cannot confirm or deny’ the attacker was a guest at Robert’s funeral but confirmed the group had attended a funeral earlier that day. 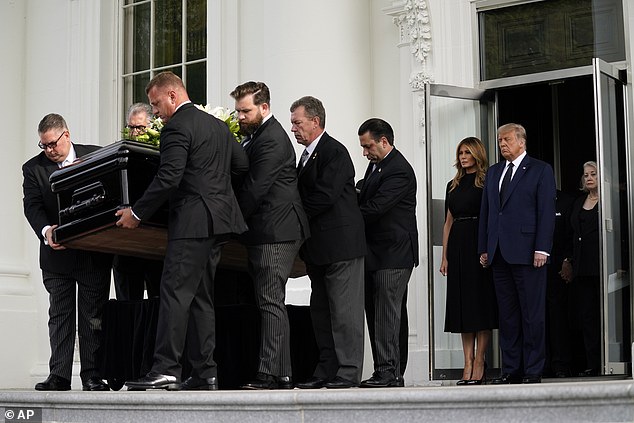 A mourner from Robert Trump’s funeral has allegedly punched a restaurant worker in the face telling them ‘you don’t know how to speak to people’ because the server told them they couldn’t fit their large party in the restaurant due to COVID-19 rules. Pictured Donald Trump at the White House service Friday 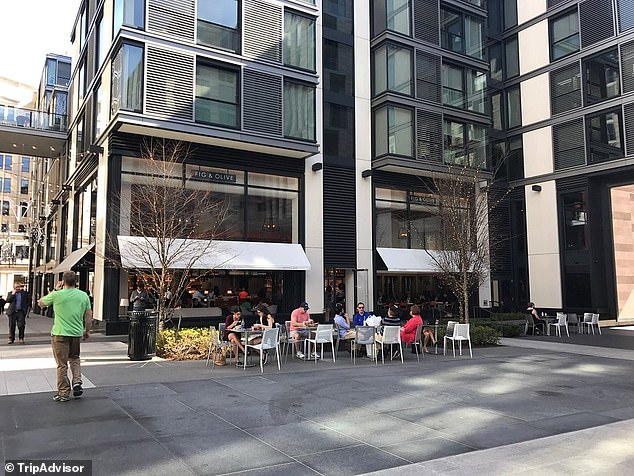 The unidentified attacker assaulted a server at Fig & Olive restaurant in Washington DC (pictured) Friday night leaving him with a suspected broken nose, according to NBC

A source said someone who was ‘in town for Robert Trump’s White House funeral’ punched the server at the restaurant.

Bennett tweeted that a restaurant worker confirmed the altercation, which allegedly happened when the restaurant couldn’t accommodate the large group.

‘I’m told some in the group were still carrying funeral programs. The “unruly” group lashed out when the restaurant couldn’t accommodate their large party,’ he tweeted.

‘Somebody blindsided one of my servers. Clocked him right in the nose,’ a restaurant worker told NBC.

‘My server’s nose is crooked. Pretty sure the guy broke it.’

The attacker, who the employee did not identify, went on to accost the victim for not speaking to them in the right way, the employee said.

‘They didn’t apologize. Just said, “You don’t know how to speak to people,”‘ they said. 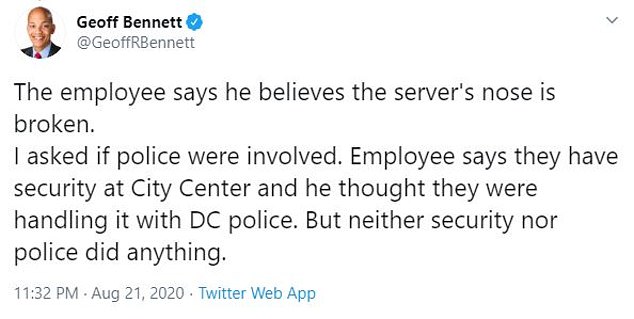 ‘It’s a pandemic, doing the best we can… Totally uncalled for.’

The worker told NBC they believe the server’s nose is broken.

Security at City Center DC, the development housing the restaurant, and police were said to be handling the matter but the restaurant staff said neither ‘did anything’.

It is not clear who the attacker is but the employee told NBC no ‘high-profile’ Trump was involved.

A spokesperson for Fig & Olive told DailyMail.com Saturday a worker had been assaulted by a person who had attended a funeral earlier in the day but that they could not confirm or deny whether it was the funeral of Robert Trump.

‘A member of our team was indeed assaulted by a guest last night. We cannot confirm or deny they were a guest of that particular funeral, but we can confirm their group had attended a funeral procession that day,’ they said in a statement.

The spokesperson branded the actions of the guest ‘incredibly unfair’ as staff adapt to the new COVID-19 restrictions.

‘Since reopening from the temporary dine-in closures due to Covid-19 restrictions, our Fig & Olive DC team has worked incredibly hard to rebuild and we have faced many challenges during the reopening period,’ they said.

‘It is incredibly unfair our team had to deal with what occurred last night, and we will make sure the necessary steps are taken to address this.

‘We have no further information to share at this time.’

The Metropolitan Police Department in DC said Saturday it had ‘no reports indicating MPD responded to that location yesterday for an assault’.

A security person at the City Center DC development refused to comment on the situation to DailyMail.com Friday nightbecause they said they ‘were not there at the time’.

The bust-up allegedly came after Trump held a private funeral service at the White House for Robert who died last week one day after the president flew to New York to be by his bedside. 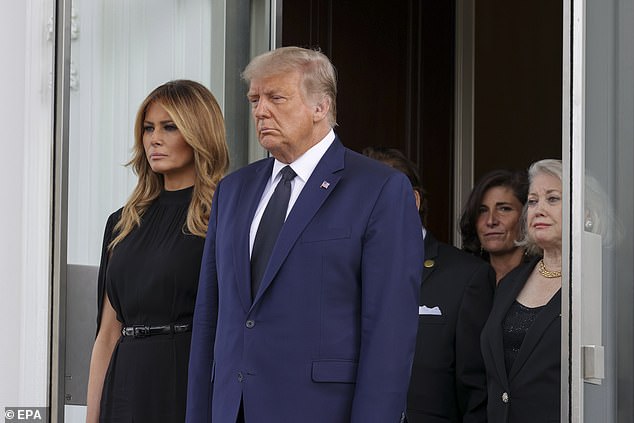 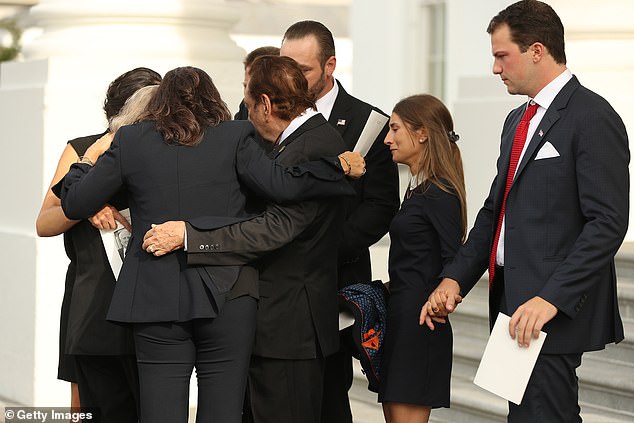 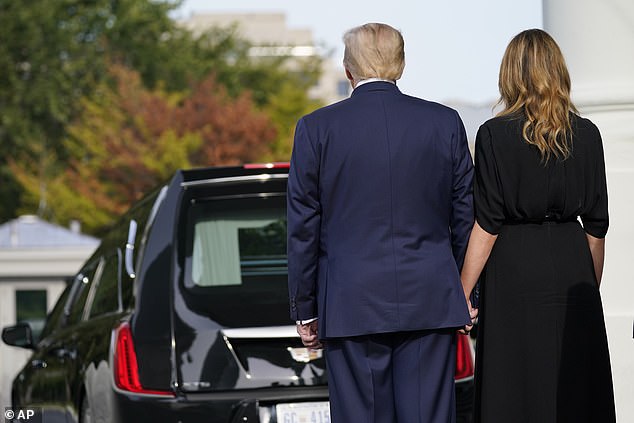 Trump and Melania Trump cut somber figures as they watched pallbearers carrying Robert’s casket out of the North Portico of the White House and down the steps to a waiting hearse late Friday afternoon.

Robert’s widow Ann Marie Pallan Trump, 55, – who he wed back in March – looked on tearfully and was joined by Donald and Robert’s sister Elizabeth Trump Grau, 78, and her husband James Grau, 84, a former film producer and one-time events executive at Trump’s Mar-a-Lago estate in Palm Beach.

Elizabeth choked back tears while bagpipes played Lord Lovat’s Lament in the background – a tribute to the family’s roots as their late mother Mary Anne MacLeod came from Scotland.

They were joined by the president’s children who were all pictured on the steps of the White House to pay their respects to their uncle.

Genna and TJ were seen comforting their distraught mother and Robert’s widow Ann Marie at the bottom of the steps.

David William Desmond, 59, Robert’s oldest nephew and the only child of Maryanne Trump Barry, from her first marriage to David Desmond, was also pictured on the steps. 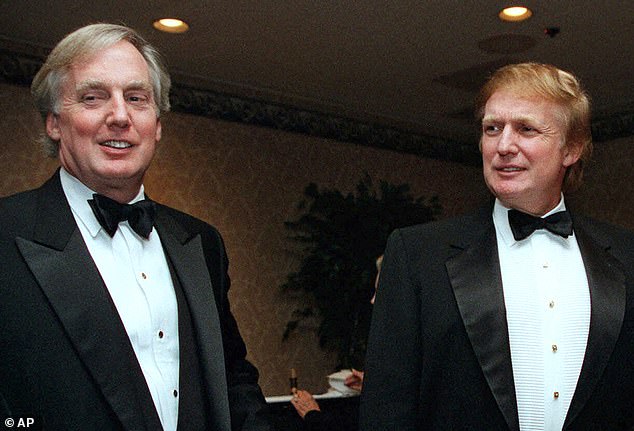 The two brothers pictured together in 1999. Robert died Saturday age 71 after ‘suffering brain bleeds from a recent fall’

Several mourners embraced and comforted each other as the black casket was placed inside the hearse and driven away.

Around 200 people were invited to the private ceremony which was reportedly personally paid for by the president but only a few dozen were seen on the steps.

This is the first time a deceased person was held at the US seat of government since President John F. Kennedy’s lay in state and his funeral procession started from there following his assassination back in 1963.

The service made Trump’s brother one of only a handful of private citizens to have had their funeral service in the White House in its entire history.

Robert died in hospital Saturday at the age of 71 after ‘suffering brain bleeds from a recent fall’.