Minority Americans with coronavirus are being hospitalized at far greater rates compared to their share of states’ populations.

Researchers found that, in 12 states, there were sizeable disparities in the prevalence of COVID-19, the disease caused by the virus, among blacks, Hispanics and Native Americans.

In Ohio, for example, about one-third of all people hospitalized with the virus were African-American, despite them making up less one-fifth of the state’s population.

The team, from the Carlson School of Management at the University of Minnesota, in Minneapolis, says there are several reasons for these inequalities including higher rates of pre-existing conditions like obesity and less access to healthcare compared to white residents. 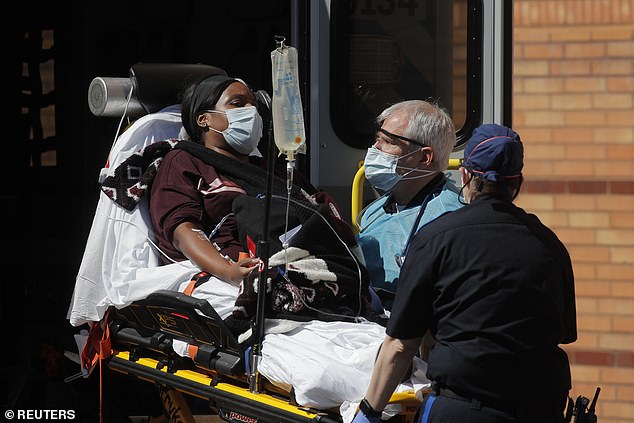 A new study from the University of Minnesota found that the percentage of black hospitalizations exceeded the percentage of their representative proportion of 12 state populations. Pictured: Healthcare workers take a patient into the Wyckoff Heights Medical Center in Brooklyn, New York, April 6

For the study, published in JAMA Internal Medicine, the team looked at 48,788 coronavirus hospitalizations in 12 states from April 30 to June 24.

Researchers then compared how the share of white, black, Hispanic, Asian and American Indian/Alaskan Native patients compared to the state’s population of those races.

They found that, across the dozen states, the share of white patients was much smaller compared to their share of the population.

For example, 52.9 percent of all those patients hospitalized in Minnesota during the two-month study period were white compared to their share of the state population, which is 84.1 percent.

In Minnesota, the percentage of black was patients was 3.6 times greater than the population and in Ohio, it was 2.5 times greater (above)

Additionally, in Utah, 42.5 percent of hospitalized patients were white, but 78 percent of all state residents are Caucasian.

The greatest difference was seen in Minnesota, where 24.9 percent of patients hospitalized with coronavirus were black despite only making up 6.8 percent of the population.

And, in Ohio, there were 2.5 times as many black patients hospitalized compared to the state population at 31.8 percent and 13 percent respectively.

This wasn’t just true for black patients. Disparities were also seen for Hispanics in 11 of the 12 states, with data unavailable for Indiana.

The most pronounced was in Virginia with Hispanics making up 36.2 percent of the hospitalizations compared to 9.6 percent of population.

Additionally, for Native American residents, the disparity was substantial in the eight states for which data was available.

In Arizona, American Indians and Alaskan Natives accounted for 15.7 percent of the hospitalizations, but only four percent of the state’s population.

Several other studies have reached similar conclusions such as one Centers for Disease Control and Prevention analysis that found disproportionately high COVID-19 hospitalizations for black people between March 1 and March 30.

Another study found higher odds of being hospitalized for COVID-19 in black California residents as opposed to those who are white.

‘A large body of research has identified racial/ethnic health disparities in the risk of infection associated with a higher prevalence of co-morbidities, less access to healthcare, adverse economic conditions, and service-related occupations,’ the authors wrote.

‘The unique clinical, financial, and social implications of COVID-19 for racial/ethnic populations that are often systematically marginalized in society must be well understood to design and establish effective and equitable infrastructure solutions.’ 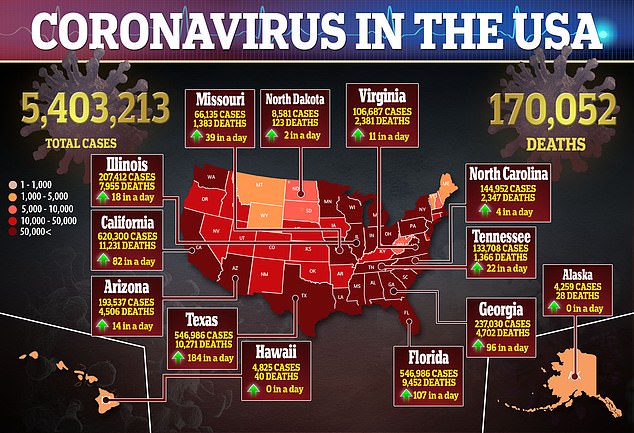 Heart inflammation in athletes who survive COVID-19 is NOT a major concern, say US doctors