There were plenty of surprises in store for the 50,000 revelers who flocked to Fisherman’s Wharf to see flamboyant California Democrat Willie Brown sworn in as San Francisco’s first black mayor.

But it wasn’t the elaborate firework display, the 10,000 meals dished out to the homeless, nor the gushing congratulatory phone call from President Bill Clinton broadcast live over the public address system that piqued the Bay City’s scribblers.

The press has expected the maverick politician to parade his attractive young girlfriend, Kamala Harris, an ambitious deputy district attorney 31 years Brown’s junior and his ‘constant companion’ on the campaign trail.

To their puzzlement, he was instead joined on stage for the 1996 inauguration by his estranged wife Blanche, despite announcing years earlier that the two had amicably split. 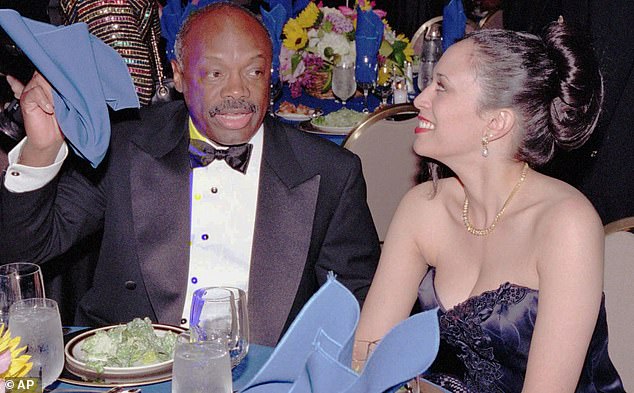 Vice Presidential nominee Kamala Harris dated San Francisco’s first black mayor Wilile Brown in the 1990s, while he was still married but separated from his wife. Pictured together a dinner in 1995 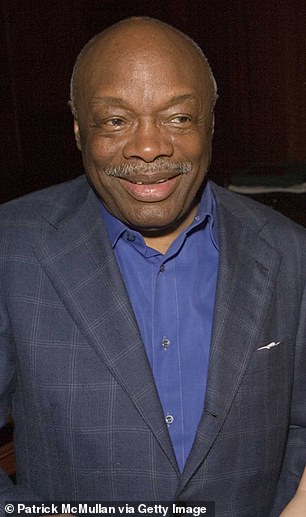 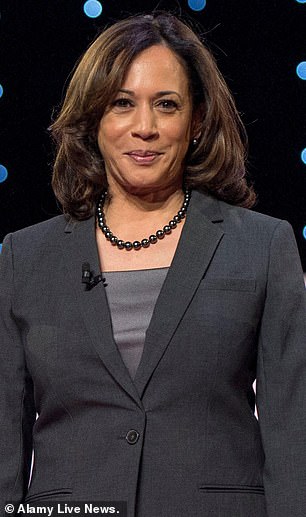 Brown is 31 years Harris’ senior and she was his ‘constant companion’ on the campaign trail. They met while he was 60 and Harris was 29 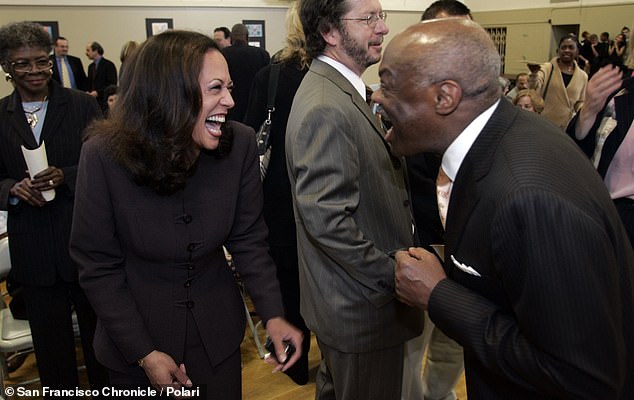 Brown was State Assembly Speaker for 15 years and appointed Harris  to unemployment insurance appeals board and California medical assistance commission, both lucrative positions. The pair are pictured in 2005

When columnist Herb Caen declared ‘It’s all over!’ the next day he was referring to Brown and Harris, whom Caen had tipped to wed.

‘This news came as a shock to many, including those who found Kamala Harris attractive, intelligent and charming,’ Caen wrote in his ‘Willie Watch’ column for the San Francisco Chronicle.

‘Also flabbergasted: the brain-trusters who found Kamala the perfect antidote to whatever playboy tendencies still reside in the mayor-elect’s jaunty persona.’

The fling may have fizzled long ago, but in the decades since, Harris has struggled to shirk her association with Brown, whom she has described as ‘an albatross hanging around my neck’. 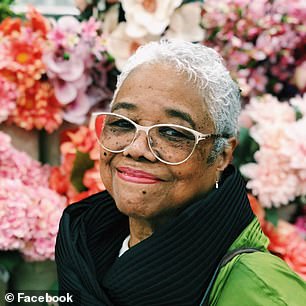 When DailyMail.com reached out to Brown’s wife Blanche Vitero (pictured) this week to ask what she thought of Harris being named as Biden’s presidential running mate she broke into laughter

Scrutiny of their relationship and suspicions that her career benefited from his political patronage, are likely to intensify now she has been unveiled as Joe Biden’s running mate.

When they met around 1993, Brown, a noted lawyer and civil rights leader, was the speaker of the California assembly and regarded as one of the State’s most influential legislators.

Brown was notorious for his love of Jaguar sports cars, flash designer suits – a look he dubbed ‘bold conservative’ despite his liberal leanings – and for being named one of the world’s ten sexiest men by Playgirl magazine.

He had also been seen with a ‘succession’ of beautiful women despite having been married for decades. No wonder then that Clinton once dubbed Brown ‘the real Slick Willy.’

‘The measure of his flamboyance is he’ll go to a party with his wife on one arm and his girlfriend on the other,’ James Richardson, a reporter for the Sacramento Bee told People Magazine in 1996.

Brown insisted that his dates should ‘absolutely be the best-dressed woman in the room,’ added Richardson, who published his own biography of Brown later that year.

Harris, meanwhile, was regarded as a diligent and able prosecutor ‘on the way up’ at the Alameda County District Attorney’s Office, where she had worked for the previous three years. 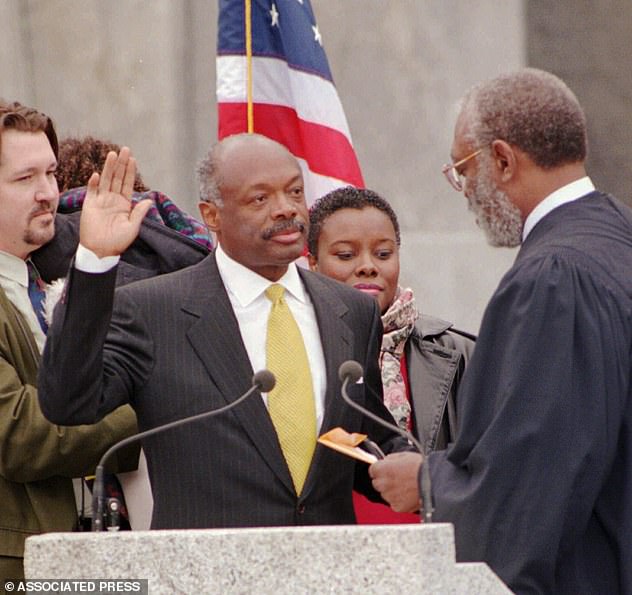 Brown had been publicly dating Harris for some time, but when Brown was inaugurated in 1996, his estranged wife Blanche was by his side after ‘splitting’ two years prior 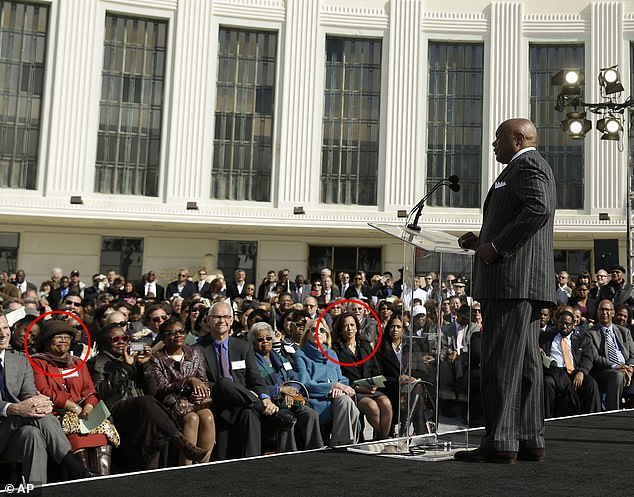 Both Kamala and Brown’s wife Blanche were front row as Brown spoke in 2014 at the dedication of Willie L. Brown Jr. Bridge at Treasure Island 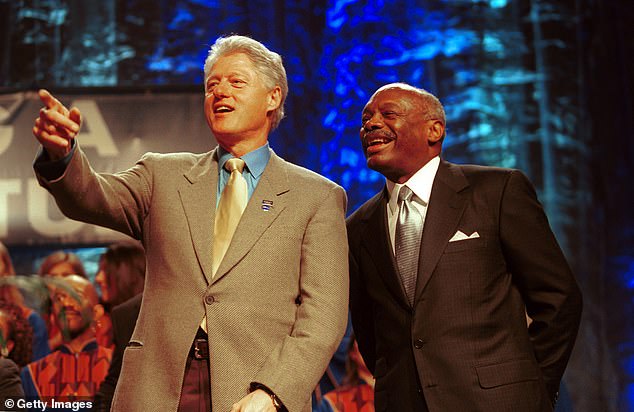 President Bill Clinton dubbed Brown the ‘real Slick Willy’. The pair are pictured together in 2000 in San Francisco

As Brown’s ‘new steady’ she soon found herself rubbing shoulders with many of California’s political movers and shakers.

‘Assembly Speaker Willie Brown, continuing his rush to hand out patronage jobs while he retains his powerful post, has given high-paying appointments to his former law associate and a former Alameda County prosecutor who is Brown’s frequent companion,’ the Los Angeles Times noted in 1994.

‘Brown, exercising his power even as his speakership seems near an end, named attorney Kamala Harris to the California Medical Assistance Commission, a job that pays $72,000 a year.

‘Harris, a former deputy district attorney in Alameda County, was described by several people at the Capitol as Brown’s girlfriend.’

Brown also appointed Harris to the state’s Unemployment Insurance Appeals Board, a lucrative position worth a further $97,088 a year, according to the same article.

She took a leave of absence from her prosecutor duties to serve in the positions.

Press reports unearthed by DailyMail.com confirm that by the time he hooked up with Harris, Texas-born Brown had for years been openly separated from Blanche, a dance teacher whom he married in 1958 and had three children with.

According to an archived 1984 profile in the New York Times the couple went their separate ways in 1982.

Richardson’s book says the union ended a decade earlier, citing a friend who recalled Brown announcing that the marriage was over ‘in either 1971 or 1972’.

For all their differences, however, the ex-couple maintained an enduring bond: ‘Willie and Blanche Brown have never divorced. She has lived in their Masonic Street house in San Francisco, and the two have built a friendship while leading separate personal lives,’ Richardson wrote in Willie Brown: A Biography.

‘Brown continued to support her and their children financially, and he took care of things when leaky pipes and plugged toilets needed fixing.’ 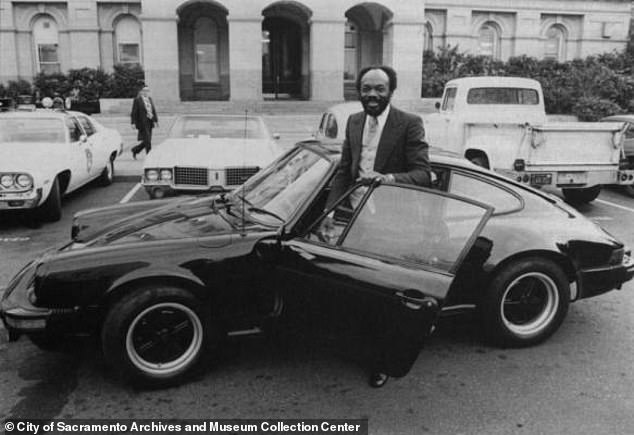 Brown was notorious for his love of sports cars, flash designer suits – a look he dubbed ‘bold conservative’ despite his liberal leanings – and for being named one of the world’s 10 sexiest men by Playgirl magazine. He’s pictured in 1976 showing off his Porsche at the State Capitol 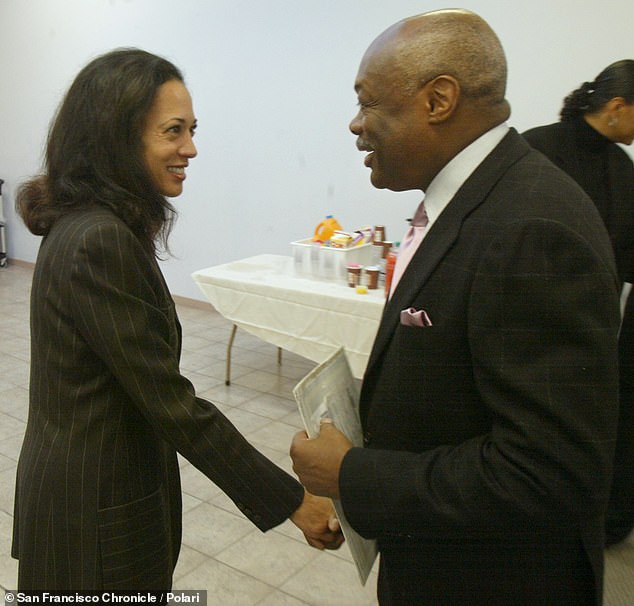 Harris has struggled to shirk her association with Brown, whom she has described as ‘an albatross hanging around my neck’. They are pictured together in 2003 when Harris was a candidate for district attorney

Nonetheless, on the day Brown was inaugurated as San Francisco’s mayor, cementing his standing as California’s most notable African American politician, it was a surprise to many to see Blanche at his side, bible in hand.

Brown ‘stunned his friends by announcing that he was breaking up with Kamala’, Richardson said of the episode.

‘Columnist Herb Caen all but predicted two days after the election that Brown would wed Kamala Harris, his constant companion throughout the campaign. ‘Keep an eye on these two’ Caen wrote.

‘No mention was made of what Brown would do about Blanche, to whom he was still married.’

Around that time a television reporter for KPIX caught up with Blanche in the street and asked her what it was like living with Brown. ‘Difficult,’ came the one-word reply.

The estranged couple remain married to this day, despite Brown having gone on to have a baby with his chief fundraiser Carolyn Carpenti in 2001.

Blanche attended Brown’s 80th birthday party in 2014 and as recently as last December they bought an apartment in San Francisco for $650,000, one of several properties they have jointly acquired over the past couple of decades.

When DailyMail.com reached out to Blanche this week to ask what she thought of Harris being named as Biden’s presidential running mate she broke into laughter.

Pressed on whether she would vote for them, Blanch, 84, added: ‘I’m sorry, I don’t want to comment at all.’ 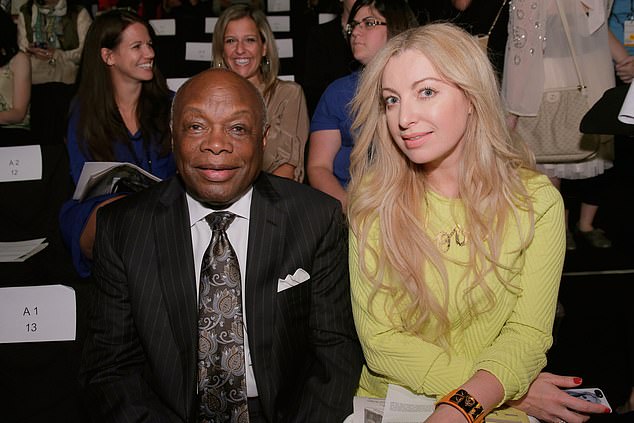 Sonya Molodetskaya is considered Brown’s ‘girlfriend’ having been pictured together at public events several times, though Brown remains married to wife Blanche 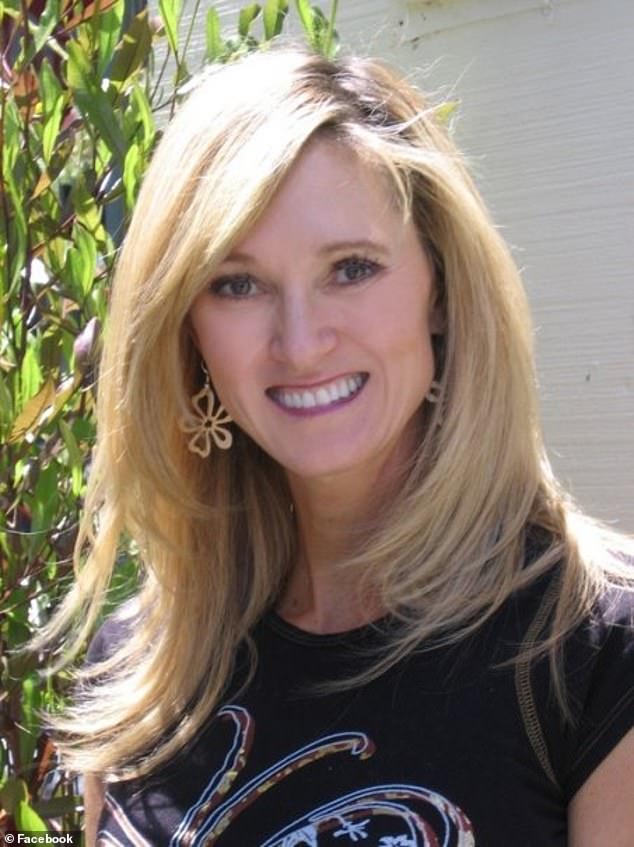 The estranged couple remain married to this day, despite Brown having gone on to have a baby with his chief fundraiser Carolyn Carpenti (pictured) in 2001

Despite being dumped by Brown, Harris continued to enjoy his support when she ran for office herself, getting elected as San Francisco’s first black district attorney in 2004.

By then Brown had faced an FBI corruption investigation for allegedly handing out lucrative city contracts and appointments to friends and political allies.

His endorsement prompted accusations of cronyism, promptly denied by Harris who was dating the talk show host Montel Williams at the time.

Under fire from her opponents, Terence Hallinan and Bill Fazio, Harris didn’t hesitate to stick the boot into her former mentor, branding him an ‘albatross hanging around my neck’.

‘I refuse to design my campaign around criticizing Willie Brown,’ she told SF Weekly. ‘I have no doubt that I am independent of him – and that he would probably right now express some fright about the fact that he cannot control me.

‘His career is over. I will be alive and kicking for the next 40 years. I do not owe him a thing.’

Harris was elected California’s attorney general in 2010. When she ran for the Senate in 2016, Brown called on her likely opponent, Antonio Villaraigosa, to stay out of the race.

Now happily married to entertainment lawyer Doug Emhoff, Harris has little to say about Brown and does not mention his name once in her 2019 memoir, The Truths We Hold.

Brown, as ever, has had plenty to say. 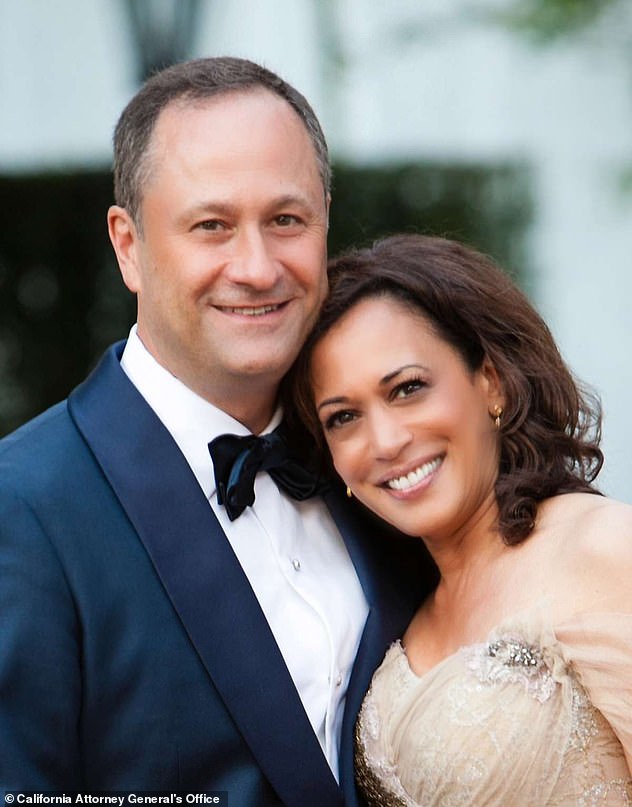 Now happily married to entertainment lawyer Doug Emhoff, Harris has little to say about Brown and does not mention his name once in her 2019 memoir, The Truths We Hold 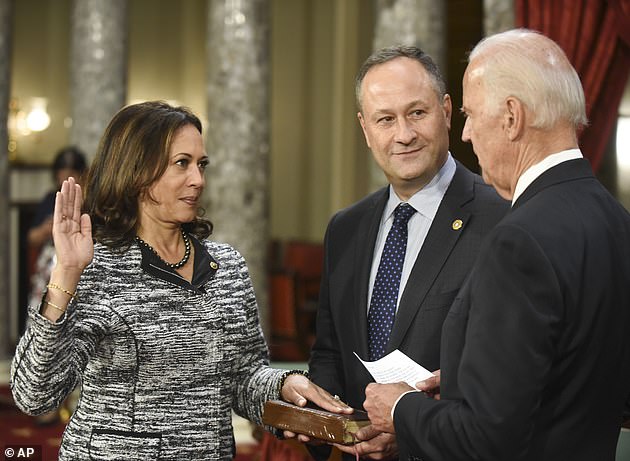 Harris and Emhoff have been married since 2014, and he could become the first Second Gentleman if Biden is to win the presidency

When Harris announced her failed presidential bid in January 2019 he penned a column for the San Francisco Chronicle entitled: ‘Sure, I dated Kamala Harris, So what?’

‘I’ve been peppered with calls from the national media about my ‘relationship’ with Kamala Harris, particularly since it became obvious that she was going to run for president. Most of them, I have not returned,’ wrote Brown, now aged 86.

‘Yes, we dated. It was more than 20 years ago. Yes, I may have influenced her career by appointing her to two state commissions when I was Assembly speaker.

‘And I certainly helped with her first race for district attorney in San Francisco. I have also helped the careers of House Speaker Nancy Pelosi, Gov. Gavin Newsom, Sen. Dianne Feinstein and a host of other politicians.

‘The difference is that Harris is the only one who, after I helped her, sent word that I would be indicted if I ‘so much as jaywalked’ while she was D.A. That’s politics for ya.’

Brown began this past week by publicly urging Harris to ‘politely decline’ Biden’s offer, saying the Vice Presidency was a dead end and that she would be more effective as US Attorney General.

When she ignored his advice, Brown changed his tune, telling NBC Bay Area: ‘As a black man, I am absolutely blown away.’

The Trump Presidential Campaign will have the next word, one suspects. 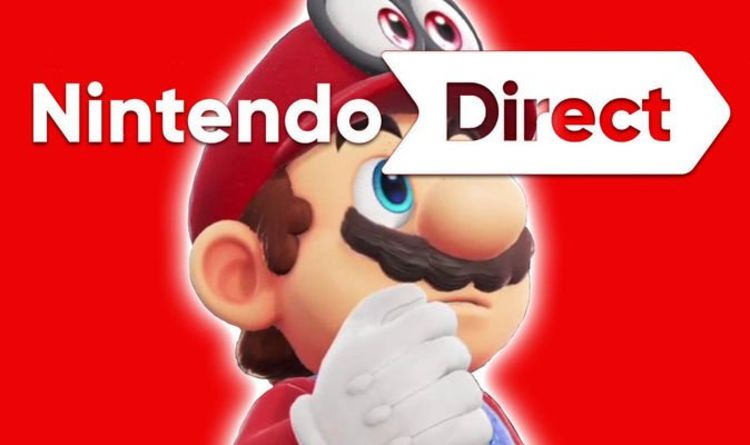 Nintendo gamers have been given hope that the February 2020 Direct could still yet happen. We are currently in the midst of […] 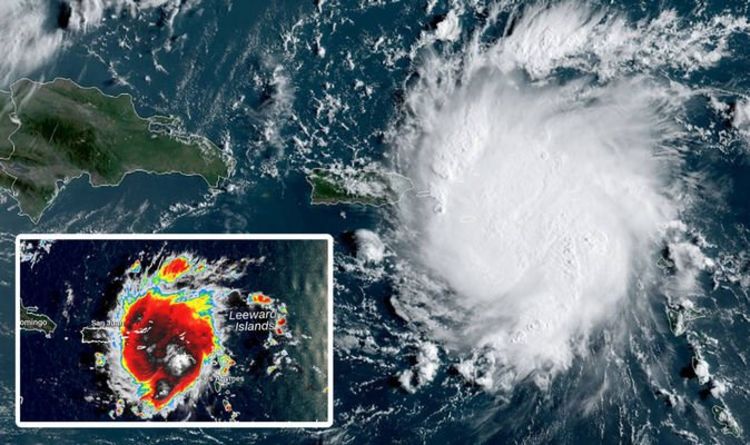 Tropical Storm Dorian was the fourth named tropical storm of the 2019 Atlantic hurricane season and is now the second offical hurricane. […] 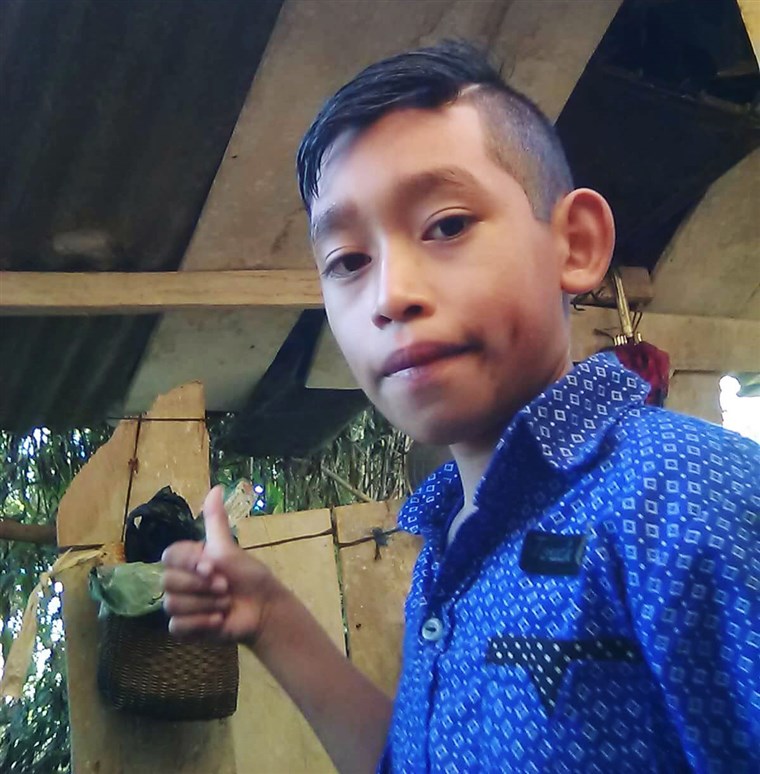 McALLEN, Texas — Tomas Yacón Moro has tried to reassure his little brother that the day will come when he too will […] 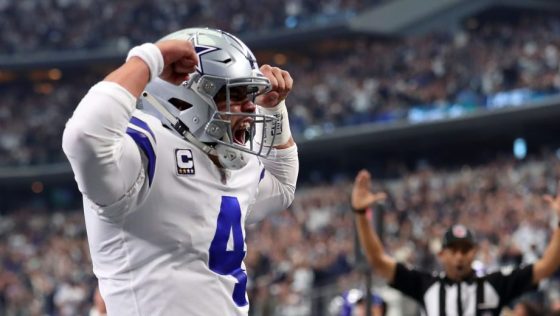 Getty Images The NFL is unpredictable. What we think we know on Labor Day leaves us wondering what we were thinking by […]