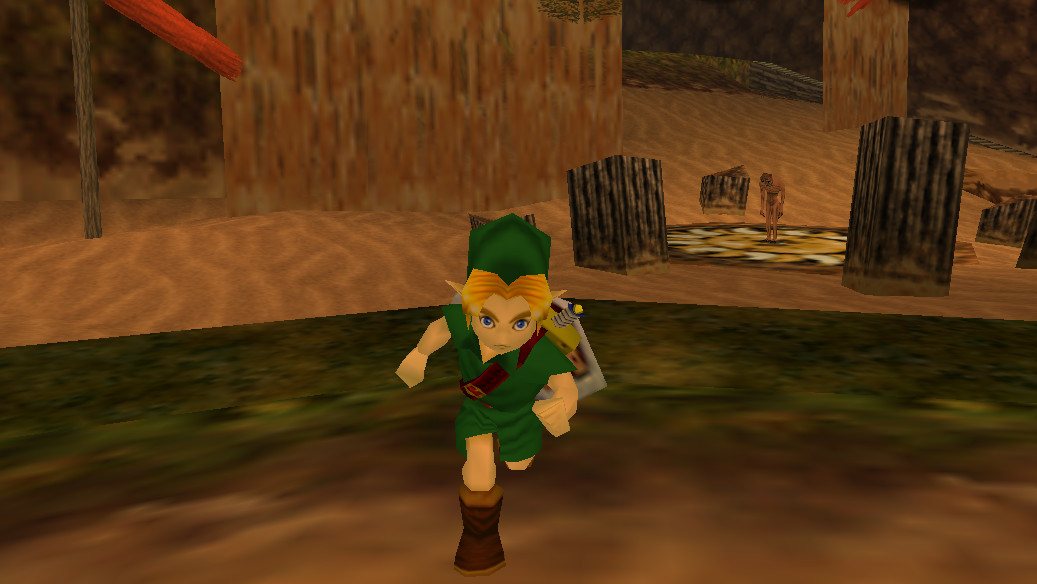 A demon is roaming the land, kidnapping fairies. There’s a village of zombies deep inside the Lost Woods. Link’s friend Saria has transferred her essence into a sword that shoots out soul (laser) beams when you swing it. The Missing Link is a fan game, all right, but from the hour or so I’ve played, it’s a damn good one.

The Missing Link, released in late July, is a romhack for The Legend of Zelda: Ocarina of Time, first released on the Nintendo 64 in 1998. Unlike some romhacks that remix parts of a game but leave the bulk of it intact, this one is a completely new adventure built out of the bones of Ocarina of Time. The textures and menus and so on will be familiar, but the game has its own story and locations completely separate from Ocarina of Time.

That story is meant to bridge the gap between Ocarina of Time and its sequel, Majora’s Mask, explaining what happened between the two games and why Link is searching for his missing fairy friend, Navi, at the start of Majora’s Mask. It was always an odd plot beat to start on, because out of the tens of millions of people who played Ocarina of Time, literally zero liked Navi. I guess Link will heed literally any call to adventure. Despite explaining something that really needed no explaining, The Missing Link is a very cool idea for a romhack.

It keeps the focus tight by taking you deep into mysterious parts of the Lost Woods rather than Ocarina of Time’s sweeping overworld, and it immediately sets its own vibe. I can imagine a 12-year-old future goth dreaming up a darker Zelda and coming up with this. Or some poor kid walking into the Skultulla house in Ocarina of Time, getting freaked out, and having a nightmare that resembles this more spartan, eerier version of Zelda’s woods. This is Spooky Zelda, with some unsettling takes on classic Zelda music, too.

There’s half an hour of original music and remixes for this thing. The soundtrack is great! Just listen to the theme for the Deep Woods, the first location you explore.

Does that have a vibe, or what?

I’ve only played the first bit of The Missing Link, but comments from other players indicate it’ll take 3-5 hours to complete. That’s a short Zelda game, but still a hell of an undertaking for modders reverse-engineering a game. I like what I’ve played so far. It’s focused on ambiance and building small puzzles around its new weapon, Link’s soul-charged sword, and those soul (laser) beams it can shoot out. Even in the first few minutes I ran into a puzzle I don’t remember ever seeing in a Nintendo Zelda. A Deku scrub kept ducking my blasts and reappearing in other bushes around a small room, so I had to cover those bushes with blocks to pin him in place before attacking. Nothing revolutionary, but encouraging that the developers were able to do something new with very old bits of Zelda design.

The small team behind The Missing Link is led by Kaze Emanuar, who’s well-known for his amazing Mario 64 mods. Emanuar first teased the mod more than a year ago and has released other smaller projects in the meantime. Where Mario 64 feels like a playground for romhackers to do crazy things, almost like Doom, I’m happy to see this Ocarina mod spin out an entirely new, cohesive adventure. There’s a special feeling to playing a game that is simultaneously brand new and decades old.

To play it yourself, you can download the patch for an Ocarina of Time ROM at the Github site here.

Photos of the Banjo & Kazooie, Byleth, and Terry amiibo

Fall Guys Season 2 Is Out Now