Patients are being offered cosmetic surgery to banish stubborn eye-bags – while awake and with their eyes wide open.

While certainly not for the faint-hearted, the method involves three minimally invasive procedures, each lasting less than two hours.

Unlike normal under-eye lift surgery, which involves incisions below the lower lid and the removal of bulging tissue beneath the skin, the new technique involves just three tiny cuts close to the eyelashes.

Dr Sabrina Shah-Desai, who pioneered the technique, says: ‘Interfering with the fat pads in the cheek means patients often need to be put to sleep because there’s a risk of nerve damage if the patient flinches. But I avoid excessive touching in this area, which allows me to keep patients awake.’ 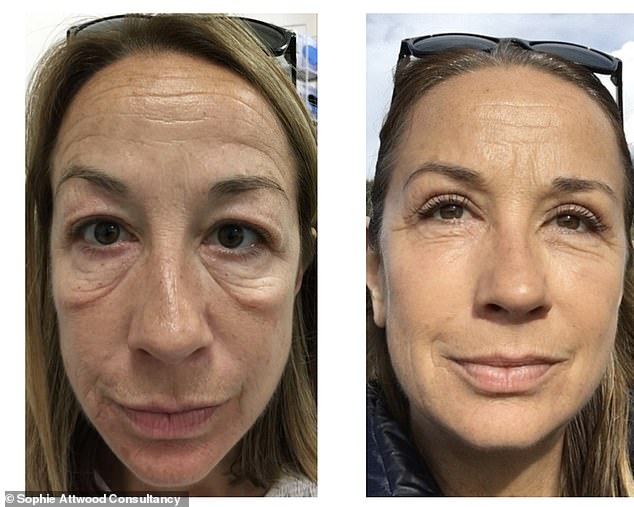 Kimberly James, 51, from Essex, pictured left before the procedure and right after, describes the results of her treatment as ‘life-changing’

Keeping patients lucid also gives surgeons a better idea of how the eye will look when they’ve finished as they can avoid stretching the skin so much it becomes uncomfortable or looks unnatural.

Kimberly James, 51, from Essex, describes the results of her treatment as ‘life-changing’.

‘I spent a decade wearing sunglasses everywhere I went because I was crippled with insecurity about the drooping, hanging skin under my eyes,’ she says.

‘I couldn’t make eye contact with people and found it very difficult to go on dates with potential partners. Hundreds of pounds’ worth of creams, masks and potions didn’t work – but I was so afraid of operations and being put to sleep.’

Every year more than 2,000 Britons undergo eye-lift procedures, called blepharoplasty, to remove and lift sagging skin from around the eyes.

What to read watch and do

A children’s tale designed to help fearful youngsters work through anxiety and, with the support of a loved one, find the courage to take on a big challenge.

An intimate and profound portrait of one doctor’s struggle as she fights to save lives at the height of the coronavirus pandemic in one of Italy’s worst-hit cities.

Men and their health problems

A free online webinar on the common health problems affecting men and when to seek help, with a separate presentation on avoiding exercise-related health issues.

Some puffiness and drooping in the skin below the eye lid is a normal part of the ageing process when the muscle supporting the eyes weakens and the skin becomes less elastic. The relaxation of the muscle also allows fat tissues from the eye socket to slip down into the space under the eyelid, giving a permanently puffy appearance.

For some, this can be remedied with non-invasive treatments that use heat or other forms of energy to firm and tighten the skin and muscle. However, for many, including Kimberly, fluid collects in the space underneath the eye, causing pockets of dark, sagging skin that spread down to the cheek.

Sometimes known as festoons, they are thought to be genetic as they often run in families. Smoking and heavy drinking are also common triggers, as both cause inflammation in the tissues and the release of fluid under the skin.

Festoons are notoriously difficult to treat, even with surgery, says Dr Shah-Desai.

‘Under the eye area, down towards the cheek, are a series of tubes involved in the drainage of fluid from the eye,’ she adds. ‘If you interfere with this too much in surgery, you can cause an increase in fluid collection over time. And if you don’t address the laxity in the skin and muscle, they can recur after a year or two.’

The first part of Dr Shah-Desai’s awake eye lift is a 20-minute non-invasive treatment that tightens the facial muscle and improves the firmness of the skin.

She first applies a numbing cream before powering up a hand-held device, called a Morpheus8. It contains tiny, heated needles which shock the deeper layers of the skin.

This triggers the production of the protein collagen – responsible for making the skin elastic and plump. ‘It also tightens the muscle, so over the next six months the gap between the muscle and fat closes and the skin gets firmer and tighter,’ explains Dr Shah-Desai.

‘For some patients with mild to moderate festoons, two to three rounds of this treatment solves the problem entirely.’

But despite two rounds of the treatment in 2016, Kimberly’s eye-bags persisted. A year later she had the second procedure – an upper blepharoplasty.

The 50-minute procedure begins with an injection of local anaesthetic to the upper eyelid area.

Dr Shah-Desai then makes a 1cm incision in the fold of the upper eyelid and cuts away the excess skin. The skin below is pulled tightly and stitched back together. 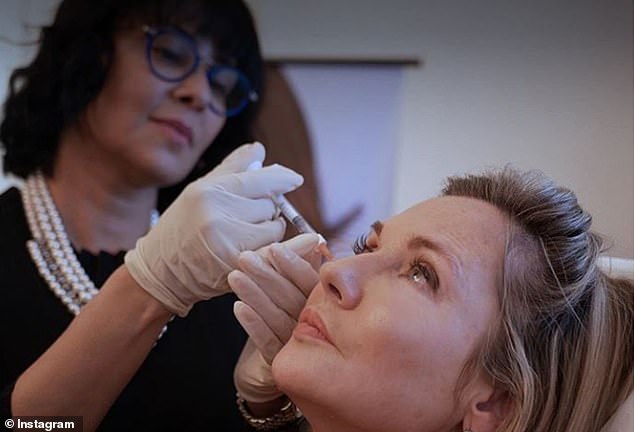 ‘There’s usually no visible scar – it’s tiny and hidden in the crease of the eyelid – and it takes only about two weeks for the swelling to reduce,’ says Dr Shah-Desai.

A few months later, Kimberly completed her transformation by undergoing a lower blepharoplasty to tackle her festoons.

During the two-hour operation, Dr Shah-Desai first applies a local anaesthetic to the lower eyelid and cheek, and gives an injection of a mild sedative to ease anxiety.

‘Patients can still hold a conversation and usually open their eyes throughout,’ says Dr Shah-Desai.

Then she makes two 1cm incisions – one inside the lower lash lid and one in the outer corner of the eye – and the loose under-eye tissue is reshaped without disturbing the deep tissues near the cheek.

She uses tiny stitches to close each incision, which are removed after a week and leave a barely visible scar. ‘I was chatting away about my summer holidays and all sorts,’ says Kimberly. ‘At points, Dr Shah-Desai had to tell me to be quiet so she could concentrate.’

Once the sedation had worn off, Kimberly saw an instant difference. She says: ‘My under-eye area was red and swollen but that reduced gradually over five weeks. The swelling vanished completely after three months, and I couldn’t believe there was no scarring whatsoever.’

Kimberly returns to Dr Shah-Desai’s clinic every two years for a top-up treatment with the Morpheus8. ‘It’s key for long-lasting results,’ says Dr Shah-Desai. ‘Otherwise the muscle becomes loose again and the skin will begin to sag.’

‘Absolutely,’ she says. ‘It’s changed how I carry myself. People can see my face now – it isn’t hidden behind silly sunglasses.’ 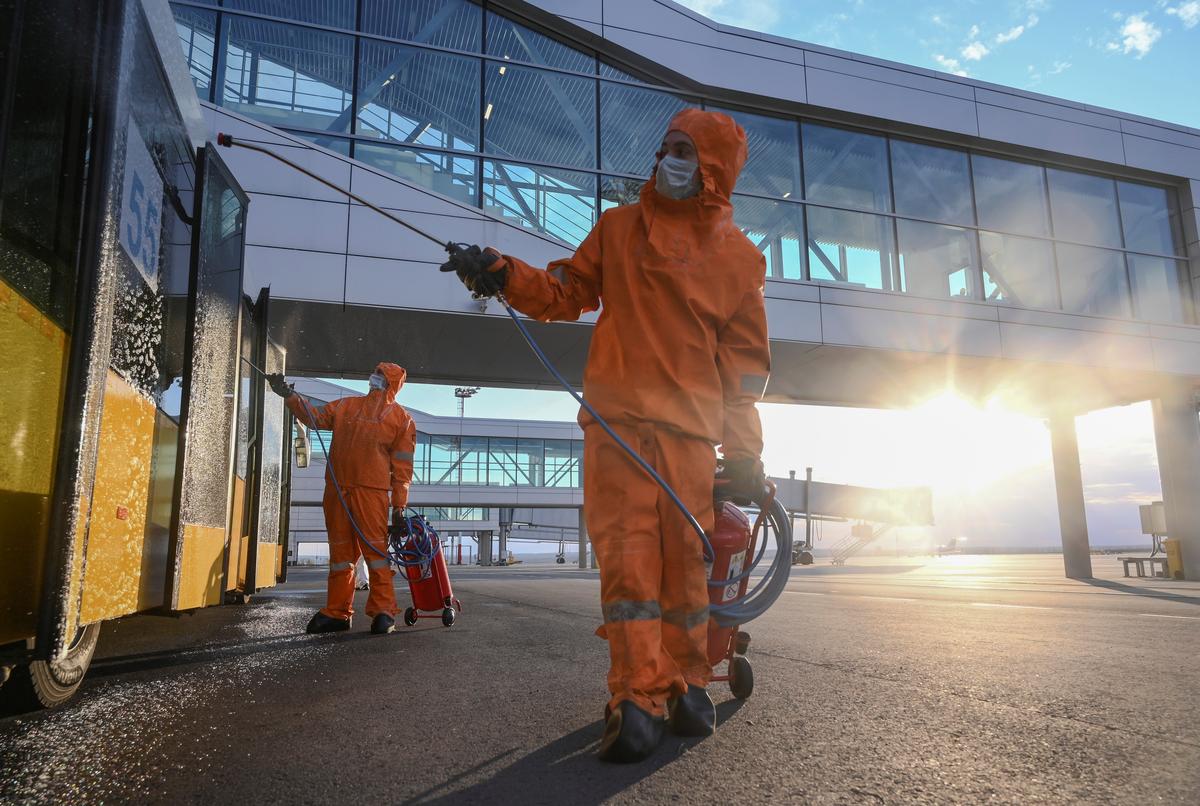 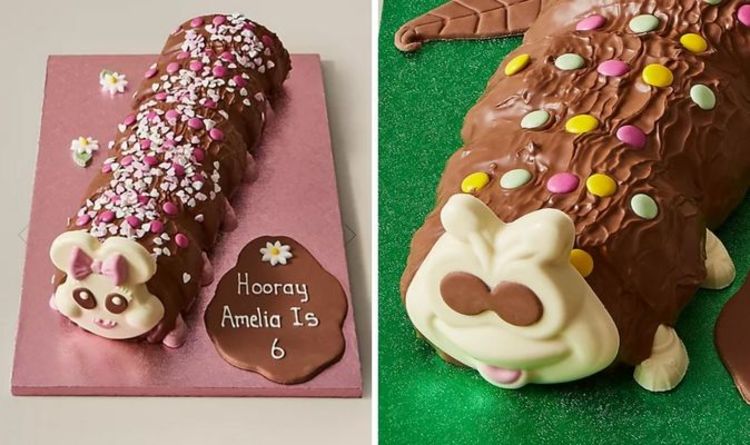 Marks and Spencer is well known for its Colin the Caterpillar cake range as well as its Percy Pig sweets. The range […] 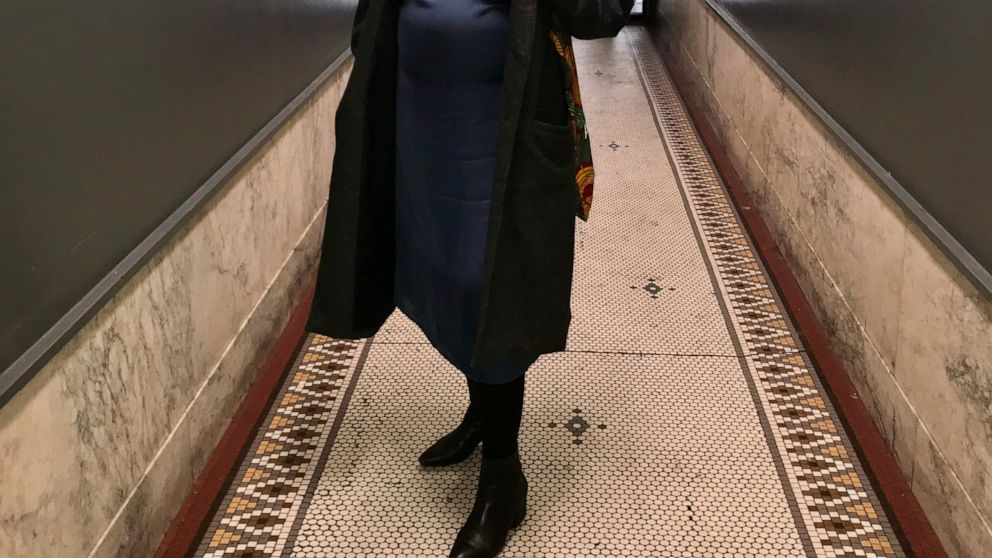 Some pregnant women fear giving birth with no loved ones by their side. Others worry about getting sick with COVID-19 and not […] 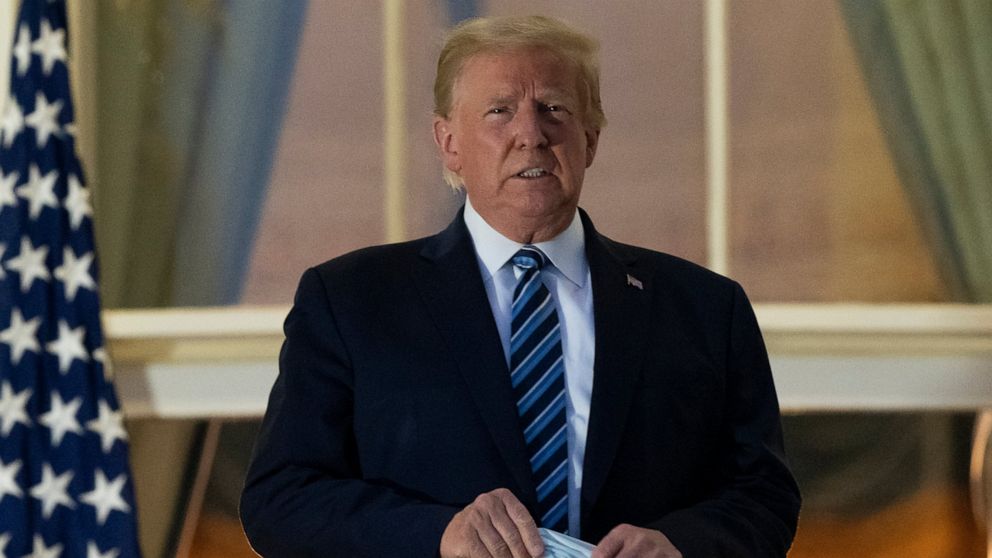