It hardly resembled the league that abruptly adjourned its season at the onset of the pandemic 141 days ago, but the NBA made its return inside the Disney World bubble on Thursday night as members of the New Orleans Pelicans and Utah Jazz protested racism during the national anthem.

On a court emblazoned with the words ‘Black Lives Matter,’ players in BLM warmups, coaches, and even officials knelt and locked arms in a demonstration that technically violated a 39-year-old league rule requiring everyone to stand for the American and Canadian anthems.

But as NBA commissioner Adam Silver explained afterwards, the circumstances have changed, and now is not the time to punish players for peaceful protests.

‘I respect our teams’ unified act of peaceful protest for social justice and under these unique circumstances will not enforce our long-standing rule requiring standing during the playing of our national anthem,’ he said in a statement. 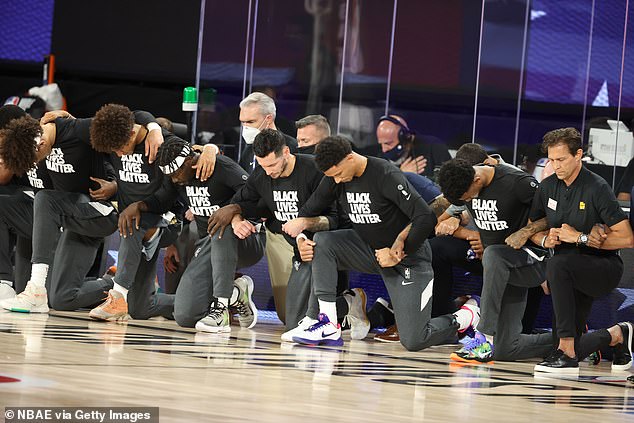 On a court emblazoned with the words ‘ Black Lives Matter ,’ players wearing BLM warmups knelt and locked arms in a demonstration that technically violated a 39-year-old league rule requiring everyone to stand for the American and Canadian anthems

Not only are NBA players suddenly allowed to protest during the anthem, as many NFL players have done since 2016, but league jerseys now feature social justice messages, like ‘Black Lives Matter’ and ‘Equality.’ Jazz guard Mike Conley had ‘I Am A Man’ emblazoned on his jersey while the Pelican’s Jrue Holiday had ‘Say Their Names’ on the back of his. 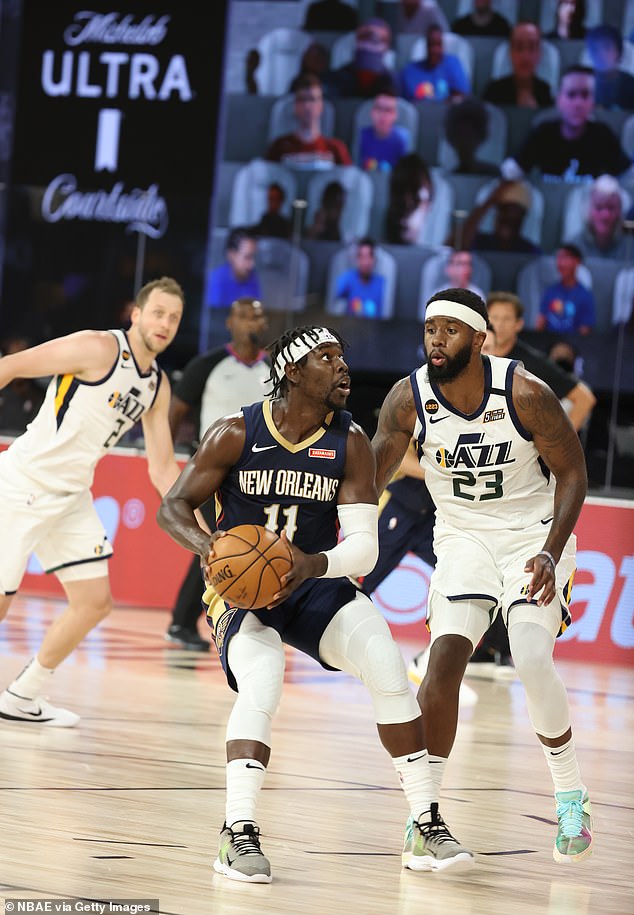 Pelicans guard Jrue Holiday pulls up in the lane as a group of virtual fans look on from a nearby high-definition scoreboard. Real spectators are not permitted inside the NBA bubble

Not only are NBA players suddenly allowed to protest during the anthem, as many NFL players have done since 2016, but league jerseys now feature social justice messages, like ‘Black Lives Matter’ and ‘Equality.’

‘It’s so important at this point for us to be unified and be able to peacefully protest many of the critical things that are going on in the country right now,’ said Jazz coach Quin Snyder.

Meanwhile in Bradenton, Florida, where the WNBA recently began its coronavirus-delayed season, Seattle Storm and New York Liberty players actually walked off the court during the anthem without any reprisal from the league office. They too were seen wearing social justice messages on the backs of their jerseys.

And that’s not all that changed since the NBA stopped play back on March 11.

There aren’t any fans in attendance, health and safety protocols are now paramount, and teams can’t even shower in the arena after games.

But after 20 weeks of waiting, wondering and worrying, the 2019-20 NBA season is restarting with a champion scheduled to be crowned in October. 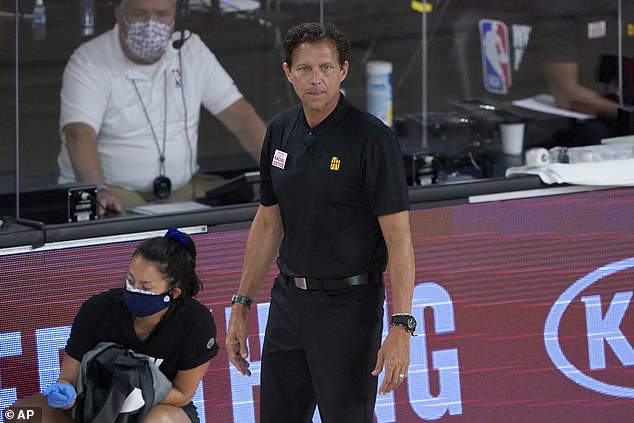 Not only are NBA players suddenly allowed to protest during the anthem, as many NFL players have done since 2016, but league jerseys now feature social justice messages, like ‘Black Lives Matter’ and ‘Equality.’ ‘It’s so important at this point for us to be unified and be able to peacefully protest many of the critical things that are going on in the country right now,’ said Jazz coach Quin Snyder (pictured) 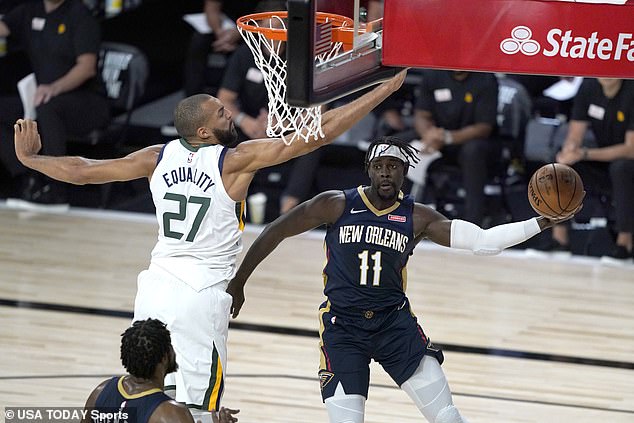 Jazz center Rudy Gobert (left) was the first NBA player to test positive for coronavirus, but was back in action on Thursday – 141 days after the league abruptly suspended its season

The field for the 16-team playoff bracket that will be finalized next month is already largely filled – 12 of the 22 teams at Disney have clinched spots and Dallas is on the brink of another one. It leaves three teams vying for two spots in the Eastern Conference, and six teams for one spot in the Western Conference.

For the front-runners like the NBA-leading Milwaukee Bucks and West-leading Lakers, the eight remaining games before the playoffs are about tuning up their games. For most of the other teams that have clinched berths, it’s about securing the best possible playoff seed. And for the hopefuls, it’s about finding a way to get into the field and stay at Disney at least a couple weeks longer than planned.

Starting Friday and running through August 14, there will be at least four and sometimes as many as seven games per day, spread out over a three-arena corner of the Disney complex. There will be many instances where three games are happening at once. And there will be days that have games running for more than 10 consecutive hours.

After no basketball for what seemed like forever, a hoops smorgasbord awaits. 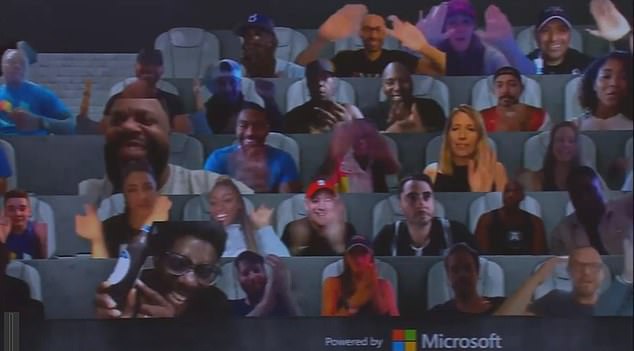 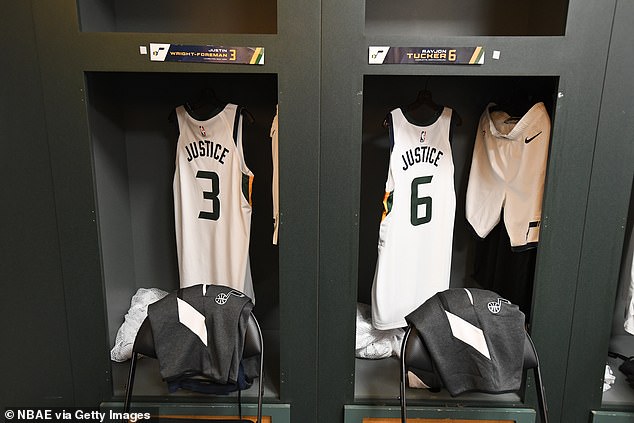 The NBA season was suspended when Rudy Gobert of the Jazz tested positive for the coronavirus and became the first player in the league with such a diagnosis. Gobert was diagnosed on March 11; two days later, Taylor, a 26-year-old Black woman, was fatally shot when police officers burst into her Louisville, Kentucky apartment using a no-knock warrant during a narcotics investigation. The warrant was in connection with a suspect who did not live there and no drugs were found.

Then on May 25, Floyd died after a white Minneapolis police officer pressed a knee into the Black man’s neck for nearly eight minutes. That happened on a street, with the images — and sounds of the man saying he couldn’t breathe, then crying out for his mother — all captured on a cell phone video.

NBA players have used their platforms — both in the bubble and on social media — to demand equality, to demand justice for Taylor. Coaches have also said it is incumbent on them to demand change and educate themselves and others. And the pregame actions by the Jazz and the Pelicans were just the start of what is expected to be a constant during the remainder of this season. 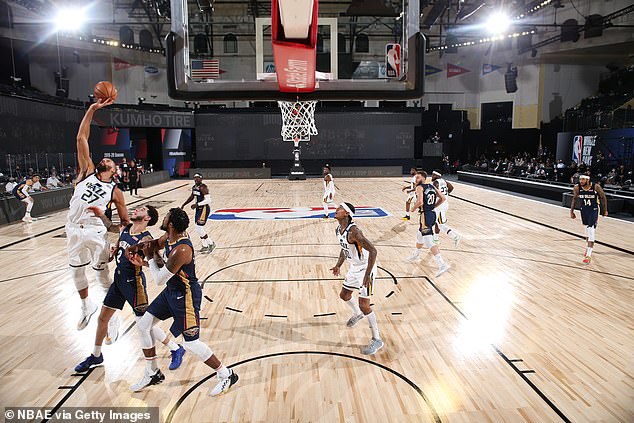 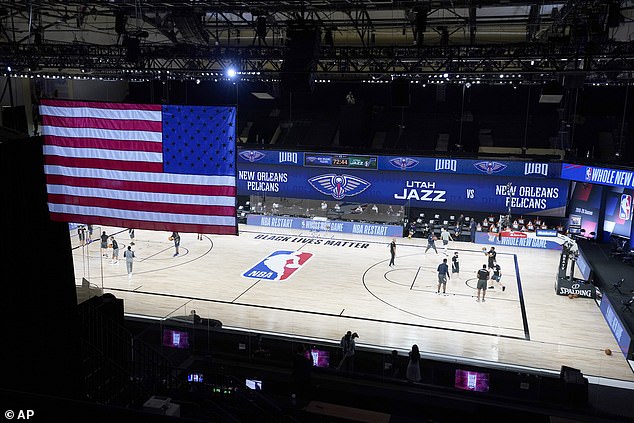 ‘It’s taken a very long time to get this momentum going,’ San Antonio coach Gregg Popovich said in a video that aired pregame, a project organized by both the NBA and the National Basketball Players Association. ‘And it cannot be lost.’

Pelicans coach Alvin Gentry said he appreciated the accidental symmetry that came from the first games of the restarted season coming only hours after the funeral for U.S. Rep. John Lewis, who died July 17 at the age of 80.

Lewis spent most of his life championing civil rights and equality and was the youngest speaker at the 1963 March on Washington — the one where Martin Luther King Jr. delivered his ‘I Have a Dream’ speech. Gentry said he believes this movement, like the one Lewis helped spark six decades ago, will endure.

‘If you talk to some of the younger generation, I think this is here to stay. I really do,’ Gentry said. ‘I have a 20-year-old son and a 22-year-old son, and I know that they feel like this is the most opportune time for us to try to have change in this country.’ 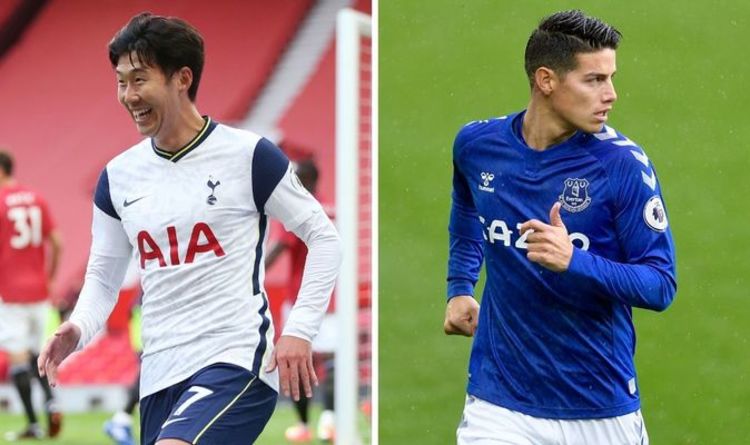 Gameweek 5 of FPL is fast approaching as managers get their teams in order for the last round of Premier League fixtures. […] 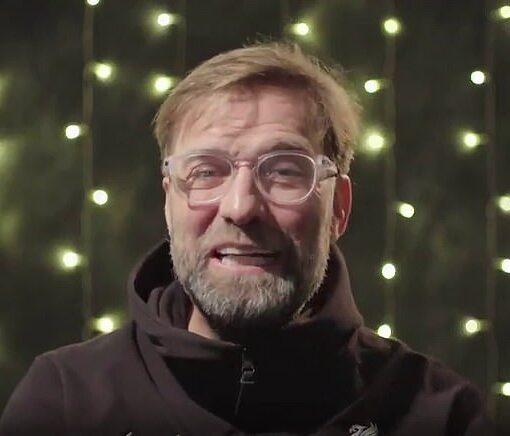