A female protest leader who was dragged into an unmarked minivan by NYPD’s ‘Warrant Squad’ during another night of unrest in New York City has now been released from custody.

Nikki Stone, an 18-year-old trans woman who was reportedly the organizer of the protest, was hit with a number of charges relating to a string of alleged incidents of vandalism before being released from the 1st Precinct station house.

Stone – who is said to be homeless – was greeted by cheers from a group of around a dozen Black Lives Matter protesters upon her release at 1 a.m. on Wednesday, including the leader on the New York chapter, Hawk Newsome.

Footage of the incident – which saw Stone bundled into a car by unmasked police officers on Tuesday evening in Manhattan’s Kips Bay neighborhood – was recorded by a fellow activist and posted to Instagram, where it quickly went viral.

She said that while she had some scrapes on her knees from the arrest, she was otherwise fine, according to ABC7NY, after being in police custody for around five hours before she was released on a desk appearance ticket.

Meanwhile, the police have said that the arrest was standard procedure for the Warrant Squad, and that the officers were being pelted with stones and bottles. It is unclear from the video if this was happening during the arrest. 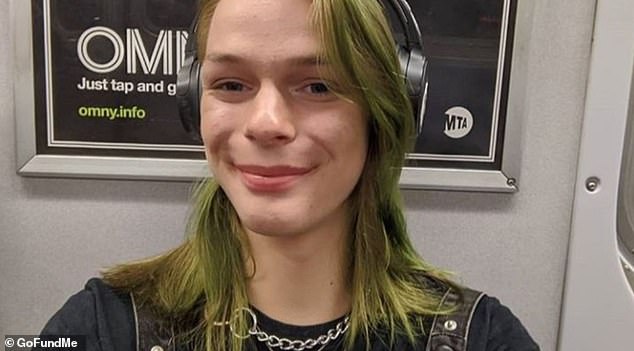 Nikki Stone, pictured, was seen being bundled into an unmarked car by a group of plain-clothed NYPD police officers. She has since been released, but has been charged with a number of vandalism and criminal mischief charges

Stone has been charged with criminal mischief for allegedly writing on the cameras at City Hall Park, according to the New York Post, which added that she has also been hit with several counts of graffiti and criminal mischief.

Other charges related to four separate incidents between June 19 and July 6, including for allegedly scribbling inside The Occulus (at New York’s World Trade Center) and on an F-train at 63rd Street and Lexington Avenue.

The video – taken at around 6 p.m. – shows the teenager being pulled by three cops towards an open door of a silver Kia as she tries to resist.

A crowd of loud protesters can be seen watching on and shouting profanities at the officers, before one man attempts to intervene and help the teenager break free.

‘Get back! Get back!’ one of the cops shouts at the crowd of agitators as Stone falls to the ground.

She is then pulled up from the pavement and forced into the vehicle before it speeds away. 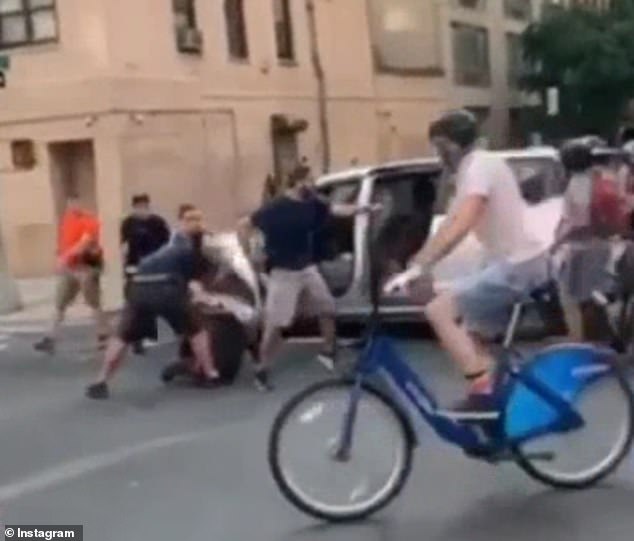 A female protester was dragged into an unmarked minivan by plainclothes police officers during another night of unrest in New York City. A mob of activists surrounded the vehicle during the incident on Tuesday evening

Several NYPD officers on bicycles quickly cycled onto the scene in order to provide added protection for the plainclothes Warrant Squad.

The bike police were seen surrounding the car in order to keep the mob of activists away.

Footage from a different angle was also shared to Twitter by another protester who wrote: ‘NYC is taking after Portland – a trans femme protestor was pulled into an unmarked van at the Abolition Park protest – this was at 2nd Ave and 25th Street’.

A third activist also shared footage and wrote: ‘An unmarked van just snatched up a protester on 25th & 2nd and NYPD started attacking us!!!!’

Another wrote: ‘An 18-year-old trans girl who organized a peaceful protest was just kidnapped by NYPD officers in an unmarked van. She’s allegedly suspected of… wait for it… putting stickers on police cameras.’ 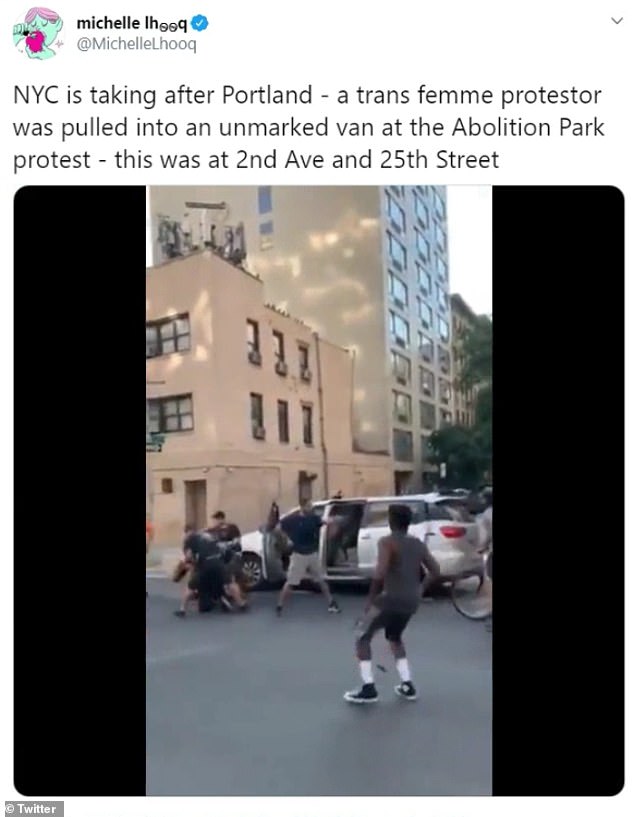 Dozens of social media users responded to the clip claiming it appeared the female protester had been ‘abducted’ and ‘kidnapped’ and the hashtag ‘#WhereIsNikki was trending on Tuesday night.

However, a law enforcement source told The New York Post late Tuesday that she is ‘a suspect in the destruction of police cameras during five separate criminal incidents’.

The NYPD also wrote on Twitter that the officers were hit with rocks and water bottles as they attempted to detain the suspect.

Police said this was standard procedure for the ‘Warrant Squad’, however the squad typically goes after more dangerous people.

Following her arrest, a fundraiser was set up for Nikki with a target of raising $15,000. It has now surpassed that, raising over $18,000. 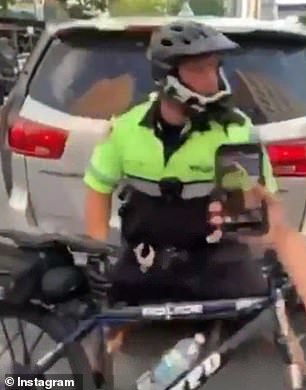 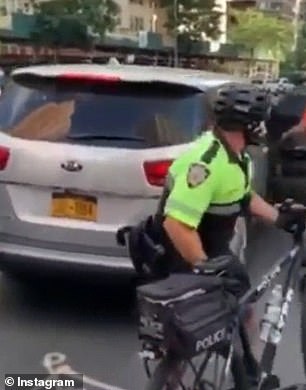 For the past two months, protesters have been marching daily in New York City calling for an end to systemic racism and the defunding of the NYPD.

At times, the protests have turned destructive, with activists physically clashing with cops and setting fire to their squad cars.

‘Another night, another riot. More ‘peaceful’ protesters assaulting cops, throwing rocks and bottles. More politicians hurling hate at cops for daring to arrest a wanted criminal. They have surrendered our streets,’ the Association wrote. 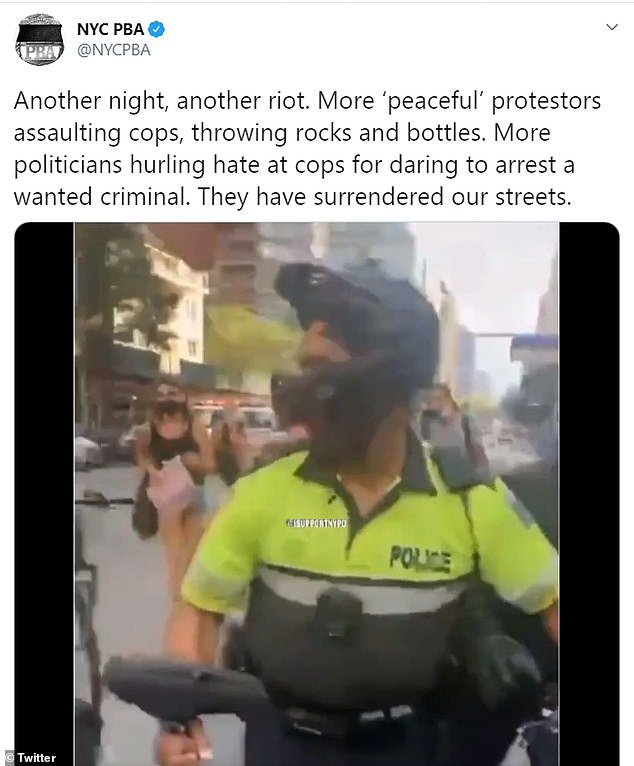 On Monday, the NYPD revealed that more than 300 police cars have been damaged by rioters since the end of May.

The department says the damage totals more than $1 million.

On Saturday night, police cars were torched during violent altercations in Lower Manhattan.

Meanwhile, violent crime across the city has spiked dramatically since protests began.

Last week, shootings were up of 253 percent in comparison to last year. Among those hit by bullets was a one-year-old boy in a stroller who was killed.

For the month of June, murders were up 30 percent year-on-year,  while robberies rose 118 percent.

The Commander-in-chief also planned to send a ‘surge’ of federal forces into Chicago, which – like New York – has seen a dramatic uptick in shootings and murders. 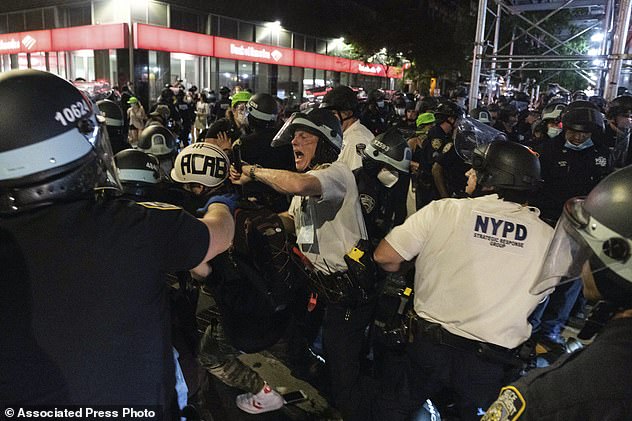 New York Police Department officers clash with demonstrators during a “Solidarity with Portland,” protest in Lower Manhattan on Saturday The Knicks have been through the gauntlet of opposing point guards during their West Coast trip. On Sunday night, they finally let […] Ma’kayla Hill rocks on her pink and white sneakers as she presents her poster. On one side, her stick-figure cartoons depict the […] Pope Francis explained the reason why he supports the change in an interview on TV2000 last year, stating that the prayer currently […]