Music could be the secret to eating less: Playing slow tunes during meals discourages people from wolfing down their food, study shows

Listening to slow and steady music while eating slows down food intake, a new study suggests.

The presence of a downbeat tempo influences how much people scoff their food, because humans have a tendency to subconsciously eat to the beat of the music.

When the music played is slow and legato, this amplifies the effect and further reduces food consumption.

Scientists say the findings could be used by schools or restaurants as a way to control the amount people consume. 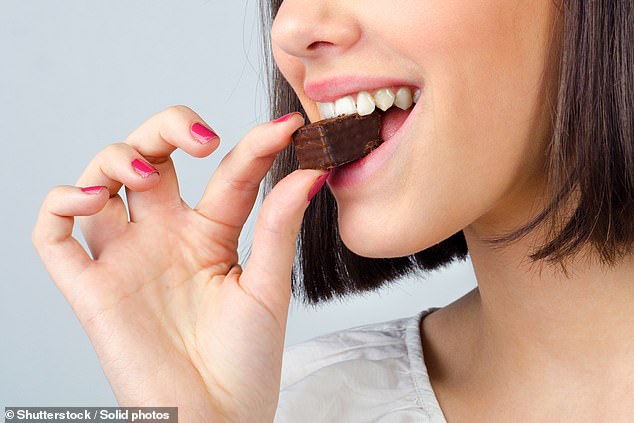 Food scientists from Aarhus University in Denmark recruited more than 200 volunteers for the research, and secretly recorded them eating chocolate.

They timed how long it took for participants to get through five pieces of chocolate.

When upbeat music of 180 beats per minute was played, the people took ten seconds longer to eat all the snacks.

However, when played slow music, at just 45 bpm, the eating speed went down again, this time taking a further four seconds to devour all the chocolate. 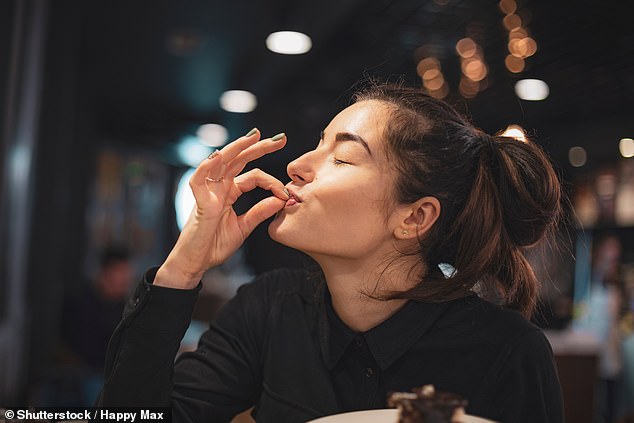 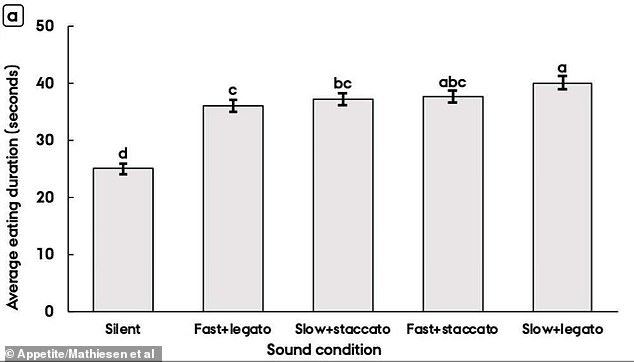 Pictured, the time it took for participants to eat five pieces of chocolate when listening to different types of music

If you find yourself ordering a greasy cheeseburger in a restaurant instead of a low-calorie salad, the music might be to blame.

A 2018 study has found that music not only sets the mood of an evening but can also influence what you order.

When subjected to louder music, customers have a tendency to order unhealthy food, such as burgers, researchers found.

However, if the same track is playing in the background but quieter they are more likely to opt for a healthier alternative.

Tempo of music has long been linked to levels of excitement – a quicker beat raises the heart rate while a slower rhythm induces relaxation.

Tempo of music has long been linked to levels of excitement – a quicker beat raises the heart rate while a slower rhythm induces relaxation.

Apart from varying speeds of the same music, there were also versions in ‘legato’, where the notes blend into each other, and ‘staccato’, when the notes are played separately.

The researchers reported: ‘The results from these experiments confirm that music could be employed as a contextual cue to modulate eating speed, contributing to healthier eating behaviours such as eating more slowly and consuming less food.’

They added: ‘A longer eating duration could be due to an entrainment effect where subjects (either consciously or not) align their own chewing rhythm to the beat of the music, thus resulting in chewing slower when listening to slower music and vice versa.

The research is published in the journal Appetite.

Why So Blue, Tarantula? A Mystery Gets a New Clue

How to track your election ballot online after you vote