A couple have been banned from shopping at Walmart for a year after video showed them wearing swastika face masks at a store in Marshall, Minnesota.

Cellphone footage posted to Facebook by vicar Raphaela Mueller shows the man and a woman wearing bandana masks adorned with giant swastikas while paying for their purchases at the cash register.

In the video, a man who is off camera can be heard telling the couple, ‘You’re sick. You have an illness, you can’t be American and wear that mask.’ 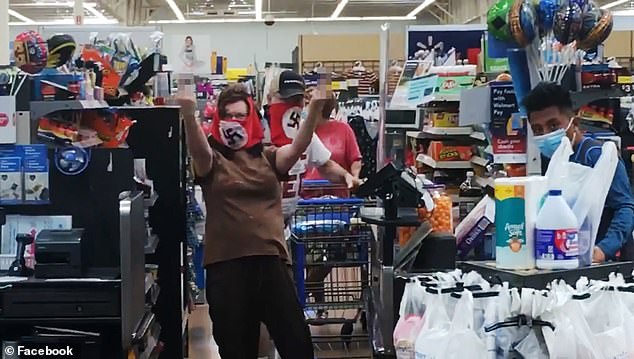 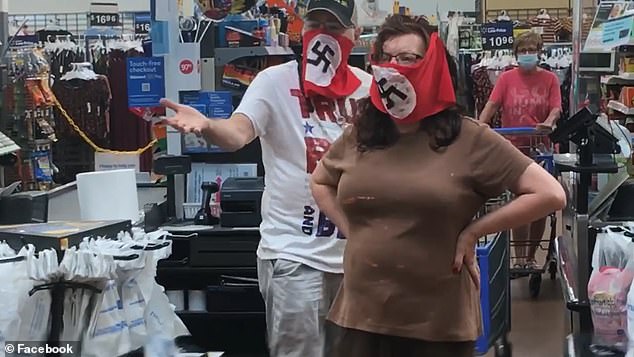 As the man is speaking, the woman flings her arms up into the air in a ‘ta-da!’ gesture, before flashing her middle fingers at the camera.

The man also raises his arms into the air, before quickly going back to putting items onto the conveyor belt.

‘We literally had a war about this,’ the off-camera man says, as the swastika-decked woman saunters over.

As the woman mumbles something unintelligible, a second man off-camera says, ‘My grandfather killed Nazis.’

The woman then paces around, denying the fact that she’s a Nazi, saying instead ‘socialism is going to happen here in America’ and that ‘If you vote for Biden, this is what we’re going to have, socialism!’

One of the off-camera men brands the mask  ‘so incredibly offensive’ as the woman walks away. 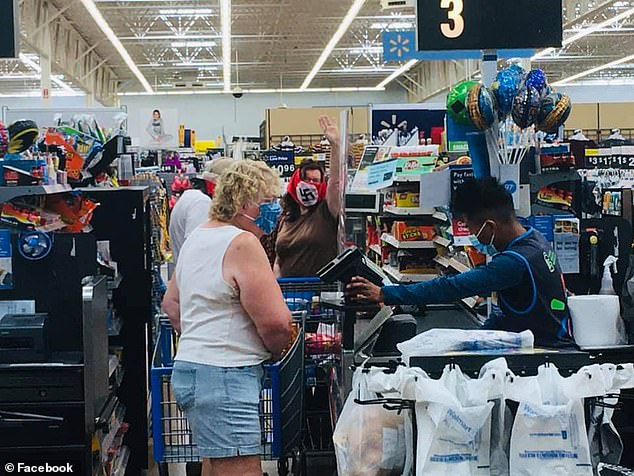 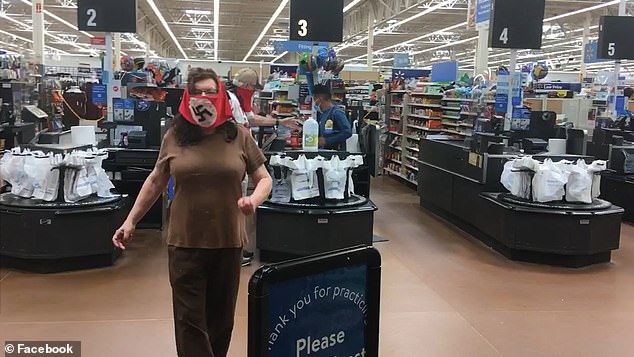 At one point, the woman marched over to the people who were videotaping them. The woman ranted about socialism being the result if Joe Biden were to win Election 2020 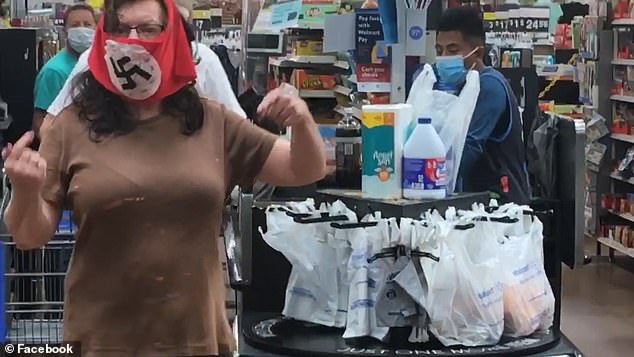 The woman denied that she was a Nazi. Police issued the couple with trespass notices that day 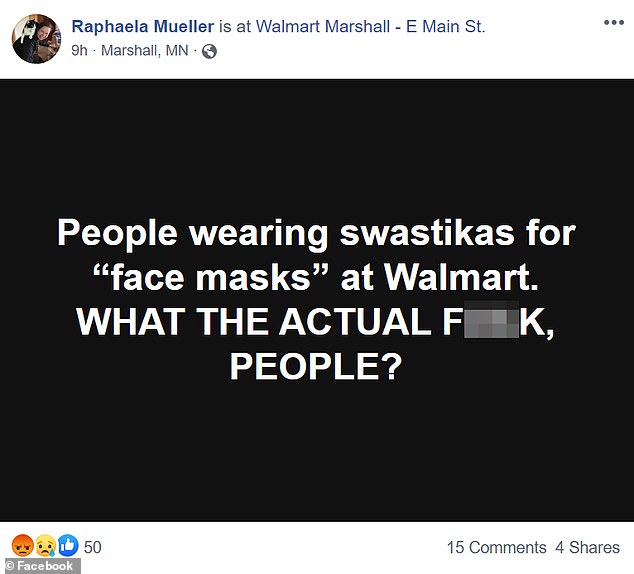 Mueller, vicar of a southwest Minnesota parish, wrote in her Facebook post: ‘I was born and raised in Germany, and I grew up hearing about my great-grandmother who fought in the underground against the first wave of Nazis in the 1930s and 40s.

‘Let me make this abundantly clear once and for all – THE SWASTIKA IS A HATE SYMBOL AND YOU DO NOT FLY THE FLAG, YOU DO NOT WEAR THE SYMBOL ANYWHERE ON YOUR BODY, YOU DO NOT USE OR DEFEND THIS SYMBOL, EVER. END OF STORY.’

Mueller wrote on Facebook that the store manager said ‘he didn’t have the power to keep them out, regardless of what mask they were wearing.’

She also noted that she intended to call the customer service hotline and ‘work my way as far to the top of the food chain as I can.’

‘They won’t (shouldn’t?) allow people without face masks now that their new rule is in effect, offensive masks should be in the same category as no masks,’ Mueller added.

After the video clip went viral, Walmart confirmed that the incident occurred at their Marshall store. 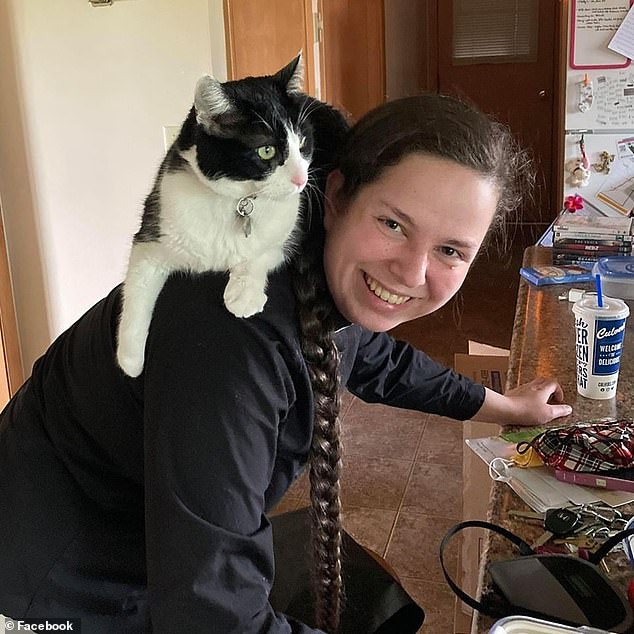 Mueller (pictured) said she was born and raised in Germany and noted that the ‘ swastika is a hate symbol and you do not fly the flag’ or ‘defend this symbol, ever’

Police told KARE that they were called to the Walmart at about noon Saturday because the couple’s masks were creating a disturbance at the location.

Marshall PD then issued the couple – identified only as a 59-year-old man and a 64-year-old woman – with a notice of trespass. The duo then left the store without incident, police said.

It’s unclear who called police on the couple with the swastika masks.

On Saturday night, Walmart issued a statement about the incident.

‘What happened today at our store in Marshall, MN is unacceptable. We strive to provide a safe and comfortable shopping environment for all our customers and will not tolerate any form of discrimination or harassment in any aspect of our business,’ Walmart said in the statement obtained by KARE.

‘We are asking everyone to wear face coverings when they enter our stores for their safety and the safety of others and it’s unfortunate that some individuals have taken this pandemic as an opportunity to create a distressing situation for customers and associates in our store.’

Walmart also told the news station that the trespass notices issued to the couple ban them from going to any Walmart for at least a year.

The couple had apparently decided to wear the swastika bandannas as a way to protest the state’s mandatory mask rule, which went into effect Saturday and was issued to help slow the spread of coronavirus, according to the Star Tribune.

Mueller told the newspaper that ‘It’s been shown that, biologically, trauma passes down through the generations in your DNA.’

She noted that: ‘My immediate physical reaction was nausea and wanting to cry, so I can’t imagine what that must feel like for other people who lost family members in the Holocaust.’

Although authorities haven’t named the couple, Facebook users claim to know the couple.

They ‘have been known bigot [sic] in the town for awhile now,’ one Facebook user wrote. ‘They spray painted “build the wall” on their garage one year. I had to drive to the middleschooleach [sic] day and pass it.’

While the swastika-wearing couple are not facing charges stemming from this incident, they could be arrested if they step food inside a Walmart in the next 365 days.

Princeton University is under investigation by the Department of Education

Report: Much needs doing to shield nursing homes from virus