The USS Theodore Roosevelt has finally returned to its homeport of San Diego after six months at sea and a massive coronavirus outbreak on board that led to the controversial termination of the ship’s commanding officer.

Under the command of a new captain, the warship – which departed in January with 4,800 crew members – arrived at the Naval Base San Diego on Thursday, marking the end to one of the Navy’s most tumultuous non-combat deployments.

However, unlike typical homecomings, there were no emotional embraces nor crowds of family and friends waiting to greet the sailors on the pier upon their return.

Instead, crew members wearing face coverings disembarked one by one and walked to waiting vehicles to prevent the spread of the coronavirus.

It comes after the Roosevelt was forced to pull into a port in Guam on March 27 amid a rapidly escalating COVID-19 outbreak. 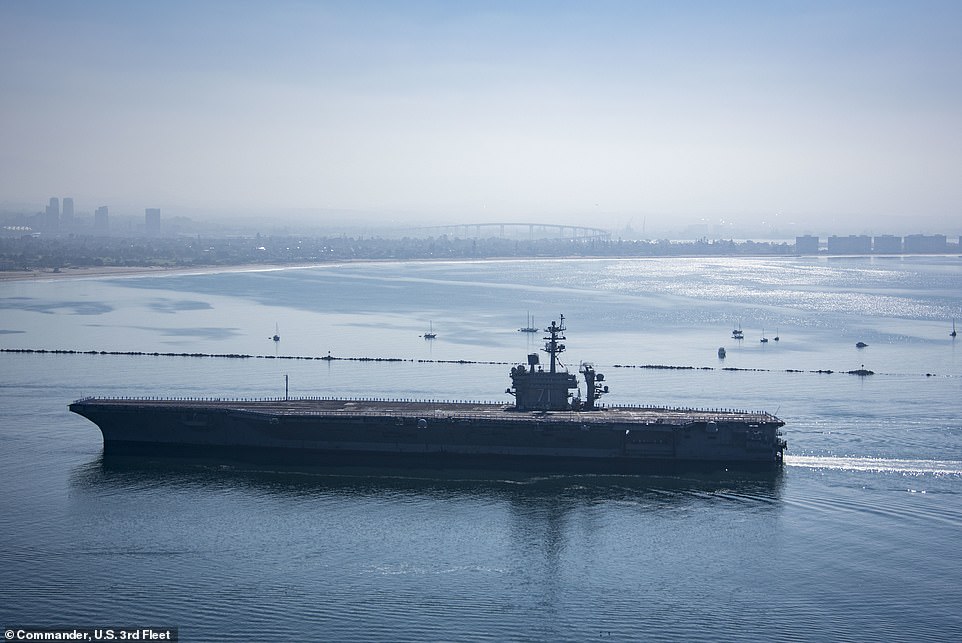 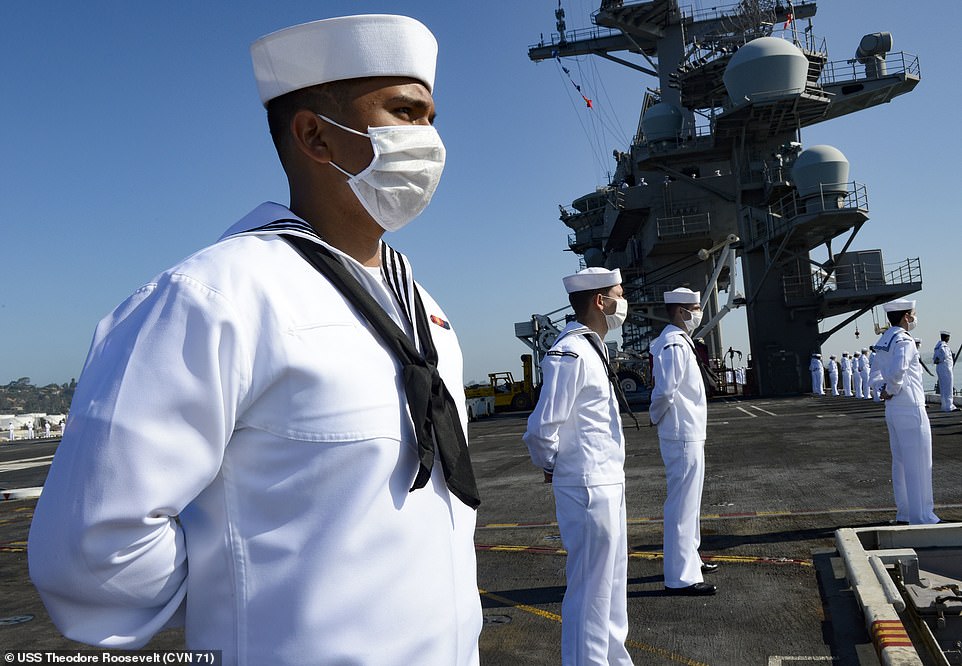 The warship departed in January with 4,800 crew members, only to be struck with a massive coronavirus in March that saw more than 1,000 sailors get infected 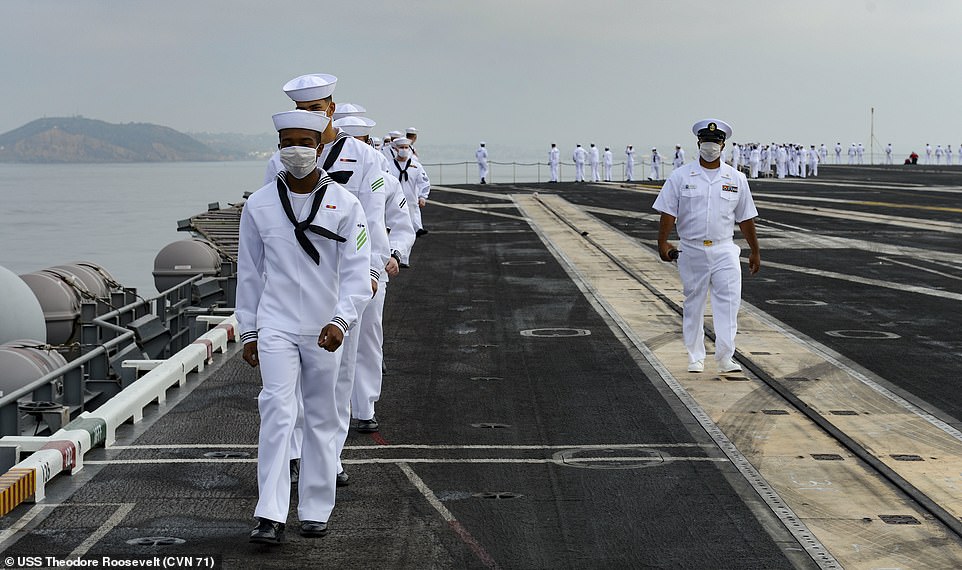 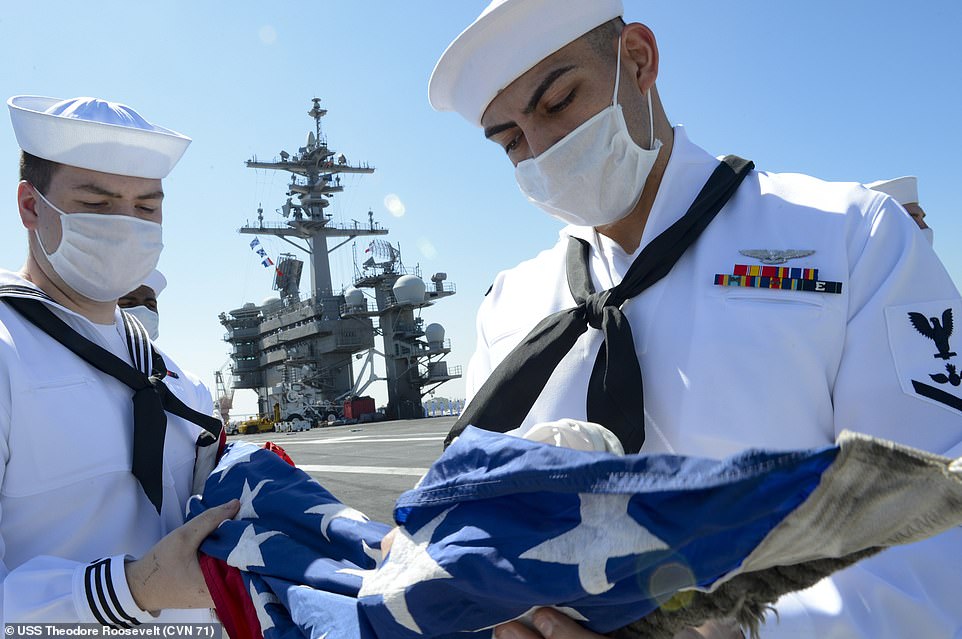 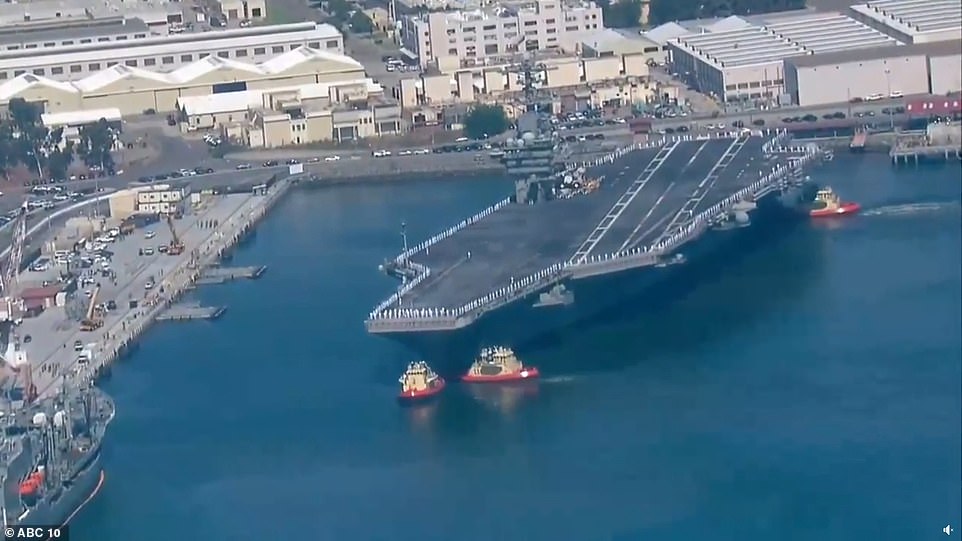 At the time, at least eight sailors had been infected, but over the weeks to come, the virus would spread to more than 1,150 crew members and kill one sailor.

The vessel remained stationed in Guam for 10 weeks as the ship was sanitized and sailors were taken off to be quarantined, treated or tested. All crew members have since fully recovered.

‘The recovery of the ship and the crew is a testament to your Sailors’ fortitude and professionalism. Right back out on mission, healthy, real, ready, relevant Naval Aviation capability and capacity from the sea,’ he said in a statement.

‘The crew of TR did not let COVID write their story; it just became one part of their history.’

Sardiello told reporters at press conference that despite their troubles over the last six months, ‘the crew’s morale is very high.’ ‘They got through this and recovered. They’re rough riders.’

‘Obviously they’re very excited to get off the ship now,’ he added.

The spread of COVID-19 aboard the carrier while on deployment in the Pacific exploded into one of the biggest military leadership crises of recent years. 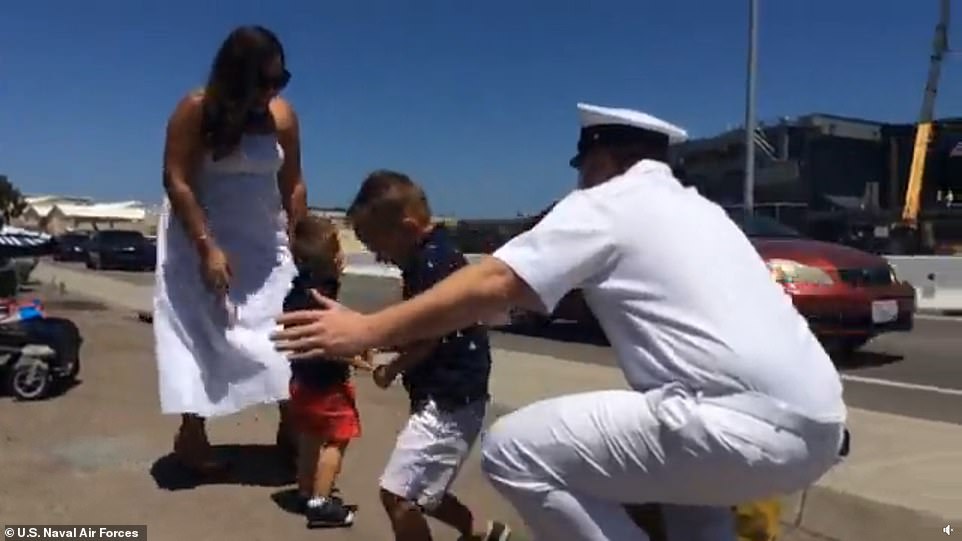 Unlike typical homecomings, there were no crowds waiting to greet the sailors at the pier upon their arrival, due to the coronavirus pandemic. Above, a sailor reunites with his wife and family after six months 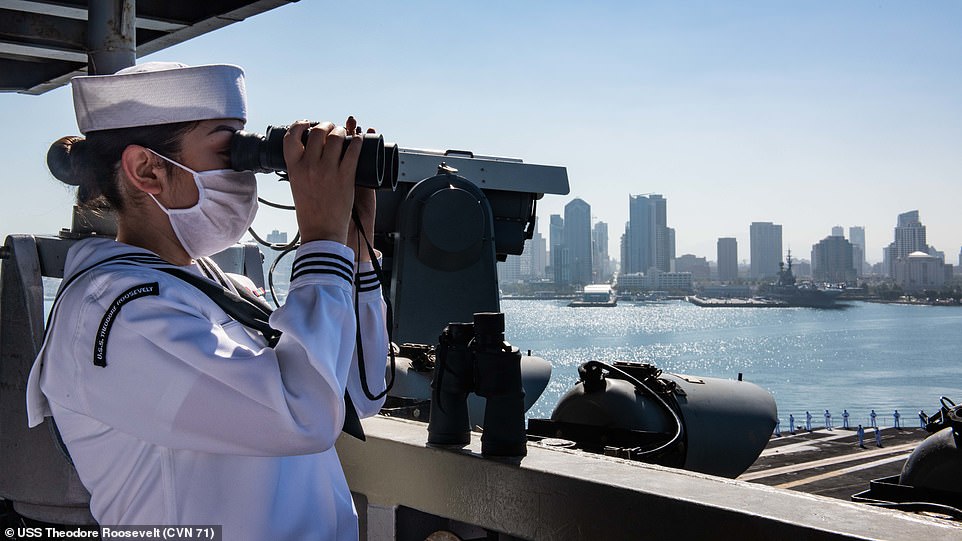 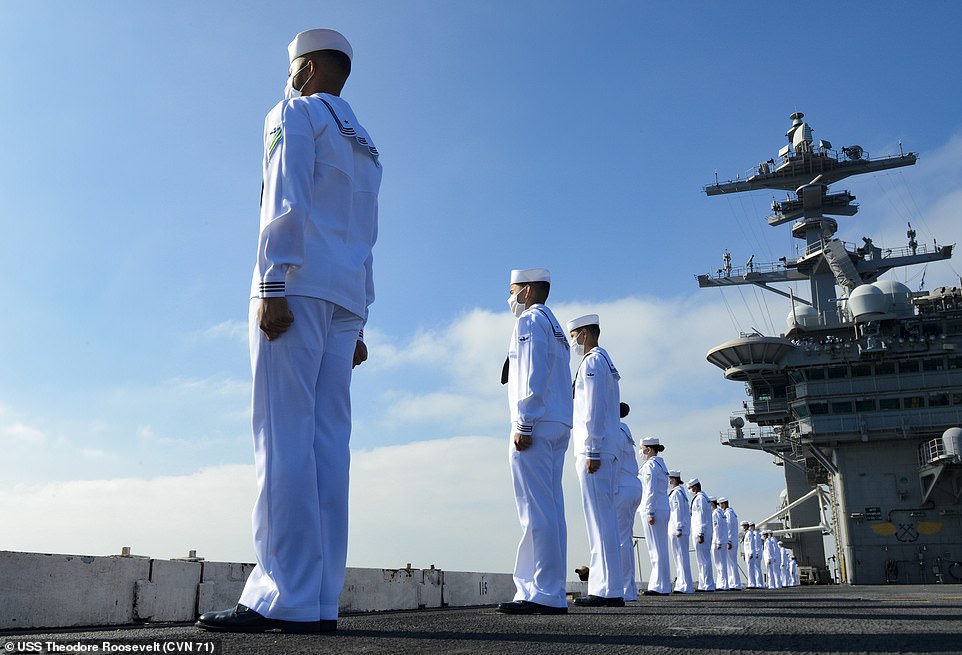 Coronavirus infections first broke out among crew members in March, but over the weeks to come it would spread to more than 1,150 crew members and kill one sailor 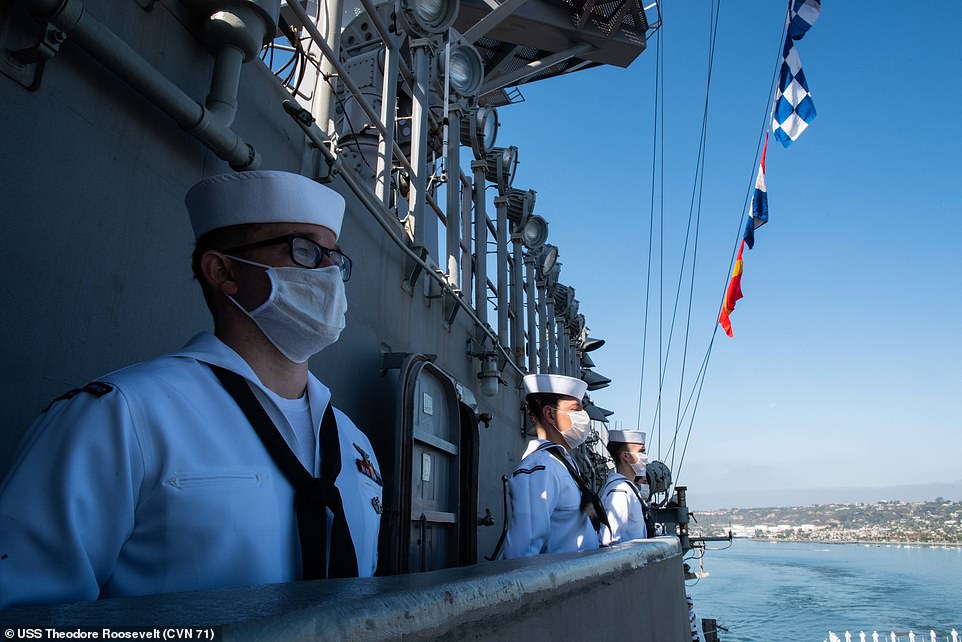 Crew members were forced to quarantine in Guam – where the ship was stationed for 10 weeks. The sailors have since recovered

It eventually sent all of crew members ashore for weeks of quarantine, in a systematic progression that kept enough sailors on the ship to keep it secure and running.

More broadly, it put out of commission a massive warship vital to the Navy´s mission of countering China’s power in the Asia-Pacific region.

Early on, then-Commanding Officer Brett Crozier urged his commanders to take faster action to stem the spread of the virus but was removed from his command when his letter was leaked to the San Francisco Chronicle.

The Navy opened an investigation, which found Crozier made serious errors in judgment that worsened the problem.

The investigation also determined that the likely source of the coronavirus infection was obtained during a port visit in Vietnam in March.

Last month, Adm. Mike Gilday, the chief of naval operations, upheld Crozeir’s firing at a Pentagon news conference saying Crozier and Rear Adm. Stuart Baker ‘failed to tackle the problem head on and take charge,’ as the virus spread throughout the ship, and their actions ‘fell well short of what we expect’ of those in command.

‘They did not do enough, soon enough,’ he said. 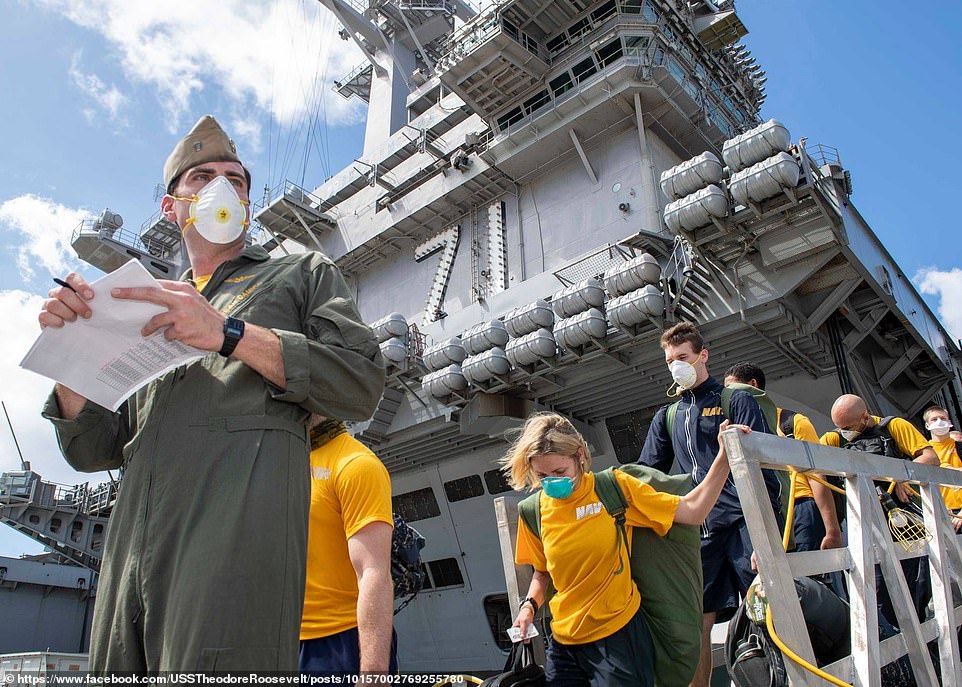 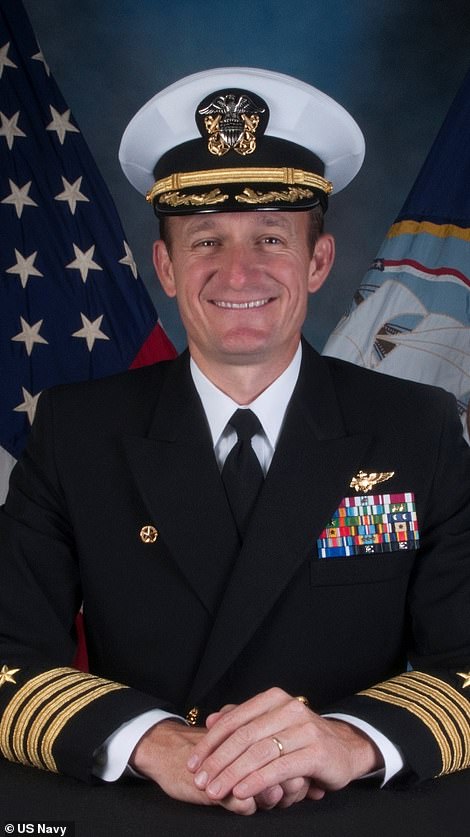 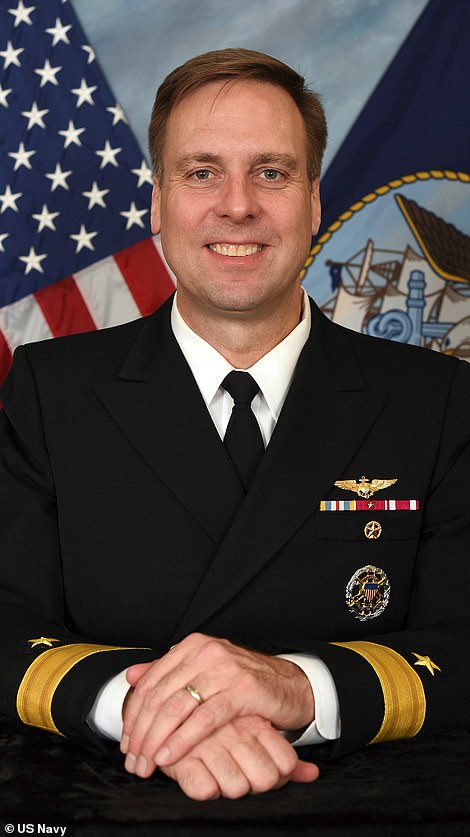 The ship had been at the center of major controversy after its previous captain Brett Crozier (left) was fired on April 2 for allegedly creating panic by sending a memo pleading for help to too many officials. Navy Secretary Thomas Modly (right) resigned on April 7 for his handling of the virus outbreak and for removing Crozier from his post 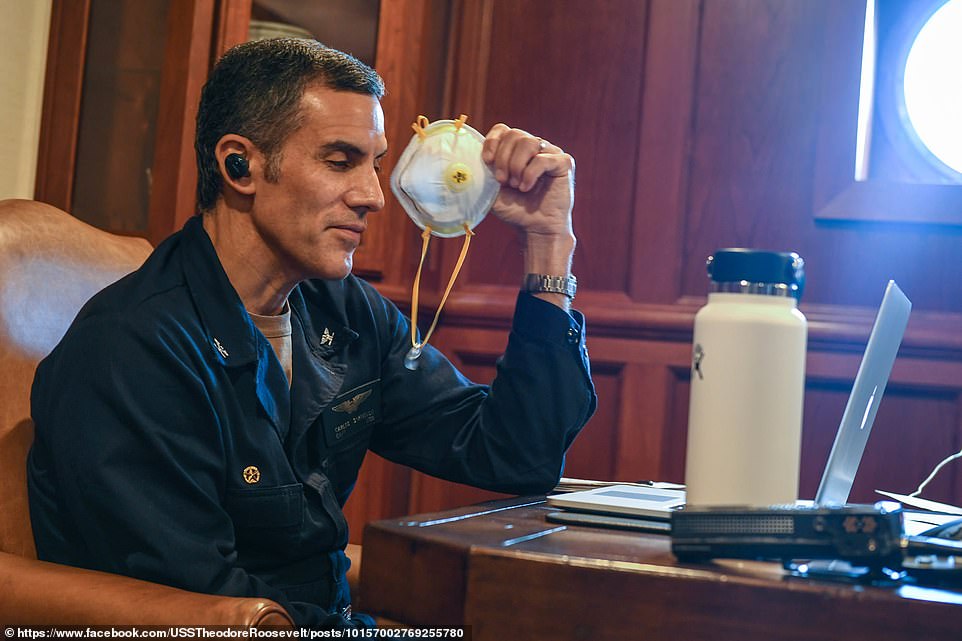 After Crozier’s ousting, the ship was placed under the command of Captain Carlos Sardiello (pictured aboard in an undated photo) 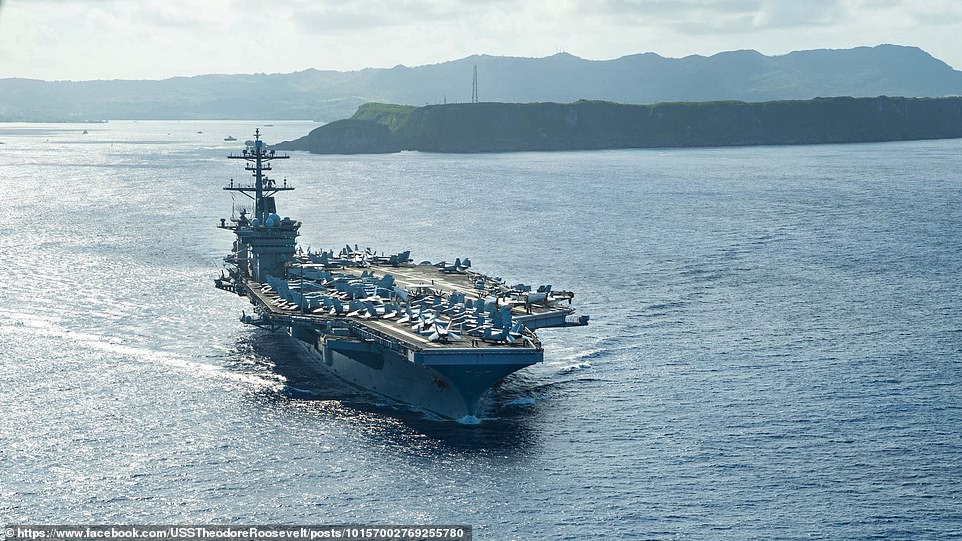 Gilday’s decision to hold both Crozier and Baker accountable is confirmation of concerns expressed by top Pentagon officials who demanded a deeper investigation when the Navy presented the results of a preliminary probe in April.

Gilday’s recommendation that Crozier be reinstated as a result of that probe was never acted upon, because the broader investigation was launched.

‘Had I known then what I know today, I would have relieved him of command in April, Gilday said.

Navy Secretary Kenneth Braithwaite, who took office after the deeper probe was begun, said at the news conference that ’emotions got in the way’ of determining the full story of what happened aboard the Roosevelt, resulting in a too-narrow initial investigation.

He said there had been ‘a rush to judgment,’ but he did not say who he blamed for that.

The ship returned to sea June 4, but two weeks later had another mishap when one of its F/A-18F Super Hornets crashed into the Philippine Sea. Its pilot and weapons officer were rescued by helicopter.

The Roosevelt continued on its mission, training on June 21 with the USS Nimitz in the Navy´s first dual-carrier exercise in the Western Pacific in three years.

Then on July 2, another sailor on board died from an undisclosed medical emergency.

Will pencil skirts and office jackets go the way of the typewriter? Retailers adjust to our new casual.

Even countries that got coronavirus under control are now struggling

Tahlequah, orca who carried her dead calf for 1,000 miles, is pregnant

Love & Basketball: Inside the Romances NBA Stars Are Missing While in the Bubble