The COVID-19 pandemic in Africa is reaching ‘full speed,’ the Africa Centers for Disease Control and Prevention chief said on Thursday, as the total number of cases rose over 500,000 on Wednesday.

Just a day after confirmed coronavirus cases across Africa surpassed the half-million milestone the total was over 522,000 and climbing, with more than 12,000 deaths. With testing levels low, the real numbers are unknown.

South Africa has the most confirmed cases with over 224,000, and for the first time Gauteng province – home to Johannesburg and the capital, Pretoria – has the country’s most cases with over 75,000, or 33%. 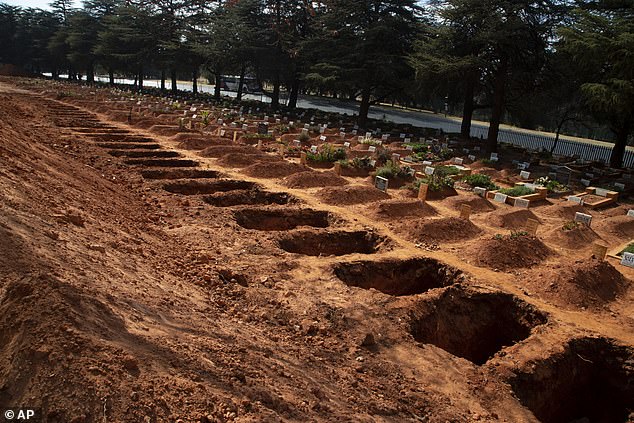 South Africa has the highest number of cases of any county in Africa with over 224,000. Gauteng province – home to Johannesburg and the capital, Pretoria – has 75,000 of them. Above, Freshly-dug graves in a row at Johannesburg’s main Westpark Cemetery, Thursday, July 9, 2020

Provincial official Bandile Masuku, a medical doctor, startled South Africans when he told reporters on Wednesday that Gauteng is preparing over 1.5 million graves. ‘It’s a reality that we need to deal with,’ he said, and it’s the public’s responsibility ‘to make sure that we don’t get there.’

But the province in a statement Thursday sought to calm fears, saying it ‘does not have over a million already open dug graves’ and clarified that the official was saying the province has enough space for that many.

It also said six members of Gauteng’s COVID-19 War Room have tested positive for the virus.

Modeling has shown that South Africa will have nowhere close to that many deaths in the months ahead. Several models forecast between 40,000 and 80,000 by the end of the year. 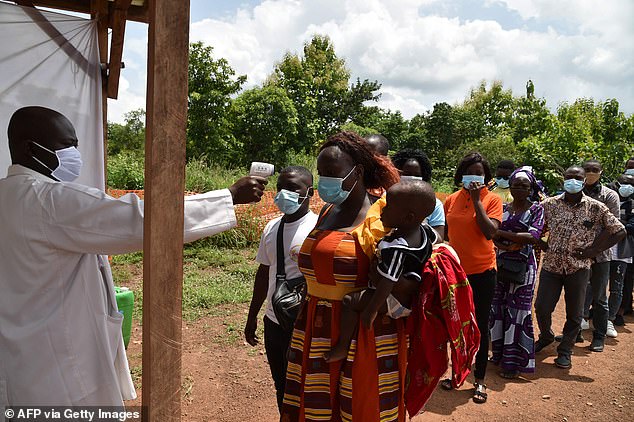 Just a day after confirmed coronavirus cases across Africa surpassed the half-million milestone the total was over 522,000 and climbing, with more than 12,000 deaths. However, testing levels are low and the true number is feared to be much higher. Ivory Coast Ministry of Health workers measures people’s body temperatures 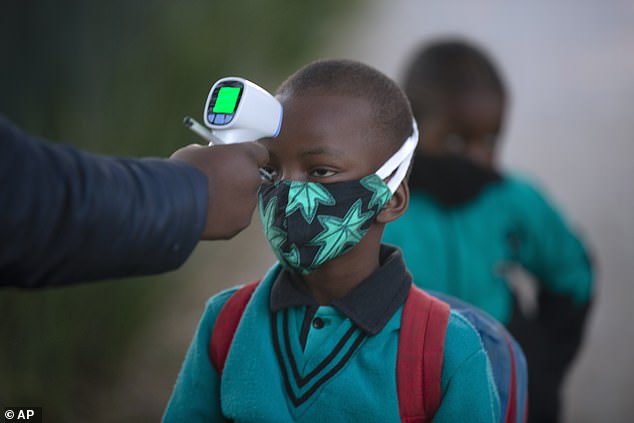 Africa Centers for Disease Control and Prevention chief called for more mask wearing, saying that ‘this battle will be won or lost at the community level’ and called for more testing. Above, a pupil’s temperature is checked on returning to school in Johannesburg, July 7, 2020

Asked about the graves, Africa CDC chief John Nkengasong said ‘there’s absolutely no harm to think ahead’ and prepare for the ‘worst-case scenario.’

‘We’ve crossed a critical number here,’ he said of the half-million milestone. ‘Our pandemic is getting full speed.’

He called for more mask-wearing, saying ‘this battle will be won or lost at the community level.’ He also called for more testing, as just 5.7 million tests for the new virus have been conducted across the continent of 1.3 billion people.

With painful memories of many people dying in Africa while waiting for accessible HIV drugs years ago, the Africa CDC on Thursday launched a consortium aimed at securing more than 10 late-stage COVID-19 vaccine clinical trials on the continent as early as possible.

‘We want to be sure we don’t find ourselves in the 1996 scenario where HIV drugs were available but it took almost seven years for those drugs to be accessible on the continent,’ Nkengasong said.

With any COVID-19 vaccine, a ‘delay in Africa of even one year would be catastrophic,’ he said. 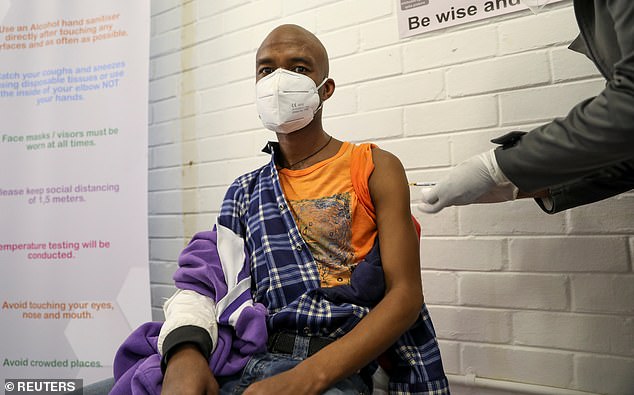 In recent days, Africa has begun taking part in COVID-19 vaccine trials with people in South Africa and Egypt the first to begin trials. Above, A volunteer receives an injection from a medical worker during the country’s first human clinical trial for a potential vaccine against the novel coronavirus, at the Baragwanath hospital in Soweto, South Africa, June 24, 2020 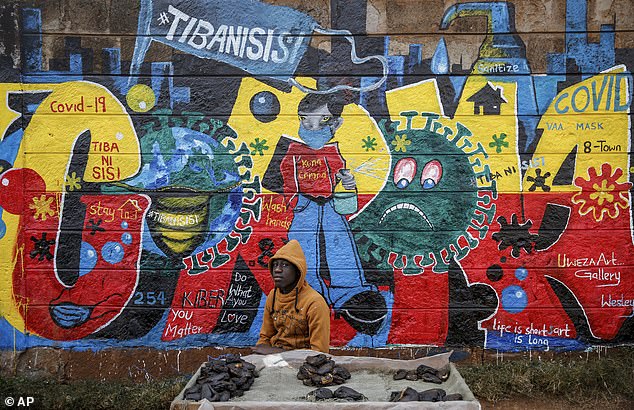 Pictured: A boy sells fish at his street stall in front of an informational mural warning people about the dangers of coronavirus and how to prevent transmission, with words in Swahili reading ‘We are the Cure’, painted by youth artists from the Uweza Foundation, in the Kibera slum, or informal settlement, of Nairobi, Kenya Wednesday, July 8, 2020 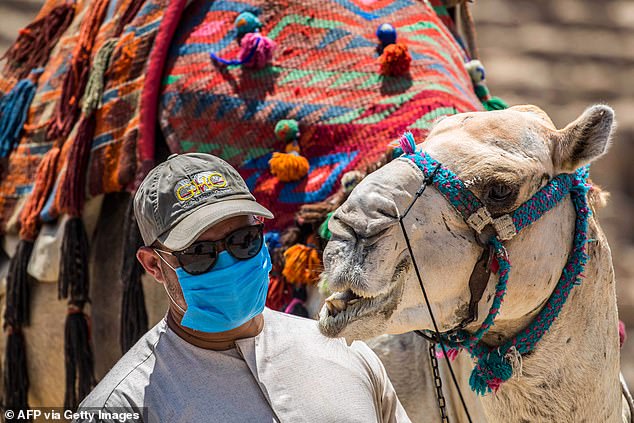 Africa Centers for Disease Control and Prevention chief said on Thursday that the Covid-19 pandemic is reaching ‘full speed’ on the continent. Above, a mask-clad camel guide stands before a camel at the Giza Pyramids necropolis on the southwestern outskirts of the Egyptian capital Cairo on July 1, 2020

He said the new consortium of African institutions will engage with the GAVI vaccine alliance and other entities outside the continent amid efforts to ensure that a vaccine is distributed equitably from the start.

Those efforts are challenged by the United States and others assertively making deals with vaccine makers to secure supplies in advance.

The African Union last month said governments around the world should ‘remove all obstacles’ to swift and equitable distribution of any successful COVID-19 vaccine, including by making all intellectual property and technologies immediately available.

Africa in recent days has begun taking part in COVID-19 vaccine trials in the face of increasing misinformation on the continent.

Trials have begun in South Africa and Egypt, but Nkengasong said a ‘continent of 1.3 billion people deserves more than just two countries participating.’

A vaccine ‘is the only weapon to allow our lives to return to normal,’ he said. 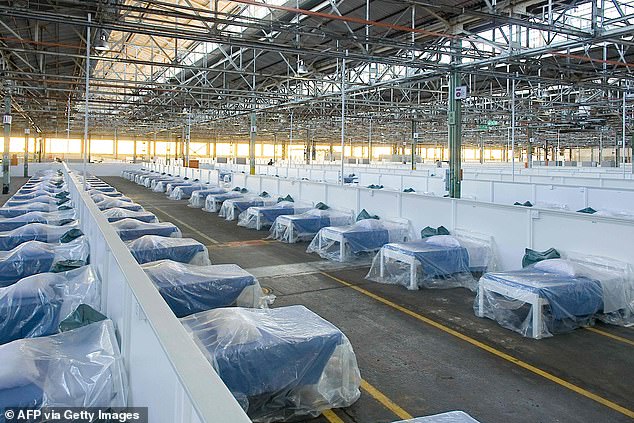 Africa has some 17% of the world’s population and less than 3% of its clinical vaccine trials. Above, the Rev Dr Elizabeth Mamisa Chabula-Nxiweni Field Hospital in Port Elizabeth, South Africa on June 22, 2020 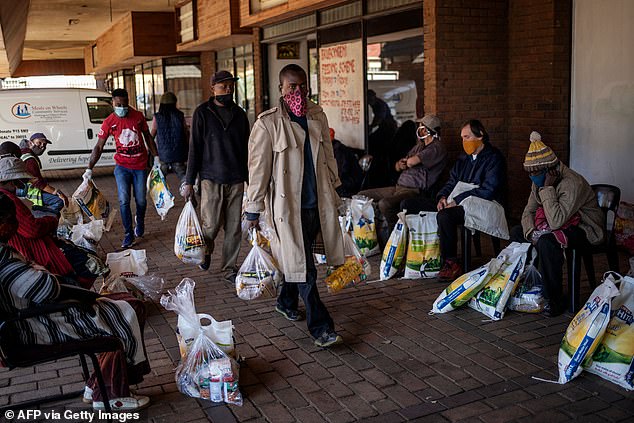 Many life-saving vaccines have lagged between five and 20 years from the time they become available in high-income countries to when they’re available in low-income ones.

Africa has some 17% of the world’s population and less than 3% of its clinical trials, he said. ‘If anything, the criticism right now shouldn’t be about the possibility of using Africans as guinea pigs.’

Africa sees few trials ‘because there’s very little financial incentive on the part of industry,’ Madhi added. ‘So the entire conversation needs to be flipped on its head.’ Ten years ago on Sept. 15, the financial firm Lehman Brothers filed for bankruptcy, triggering the worst global recession in decades. The […] 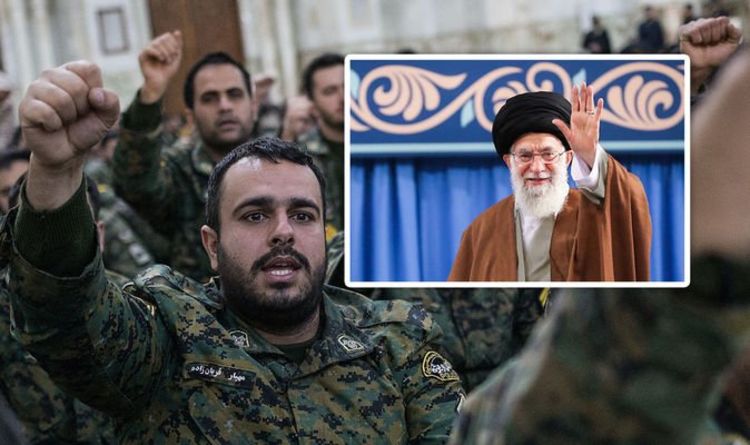 Muslim Shahdan, a senior commander served in Iran’s Islamic Revolutionary Guard Corps (IRGC), was killed in an airstrike on the Iraq-Syria border […] 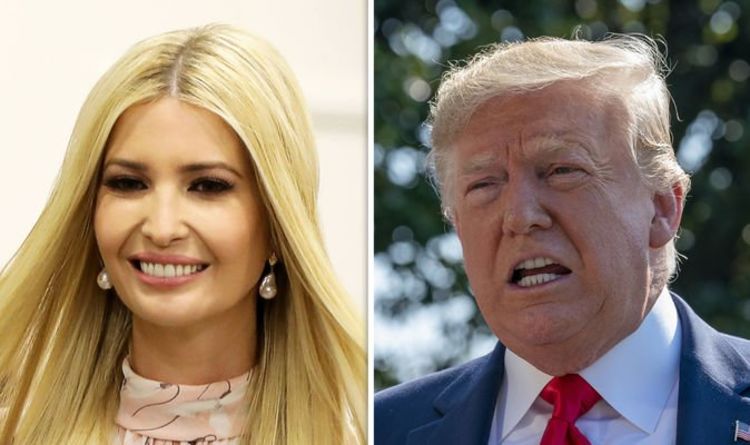 Ivanka is currently a senior adviser to the President, along with her husband Jared Kushner. This is a position of unprecedented importance […]