Question marks over Mohamed Salah’s selfishness reared their head once again on Wednesday night when the Liverpool star seemed reluctant to pass the ball in dangerous positions against Brighton.

Salah is firmly in the race for the Premier League’s Golden Boot award and is just three behind leader Jamie Vardy with four matches left to play. There were a few chances at Brighton where he could have passed but went for goal instead.

It sparked debate post-match over whether the ‘Egyptian King’ is too focused on his own goal-scoring numbers and refuses to pass to team-mates as a result of his desire to find the back of the net. 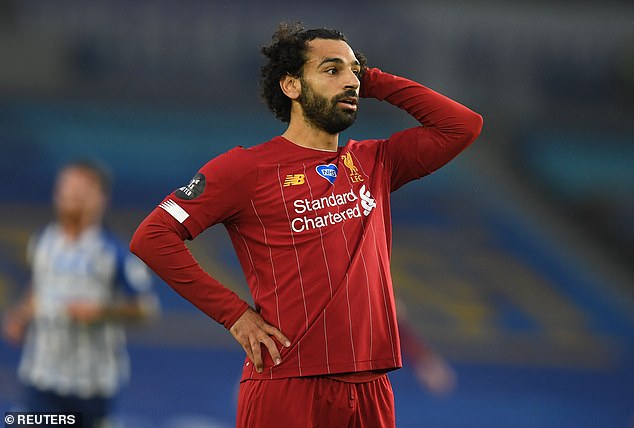 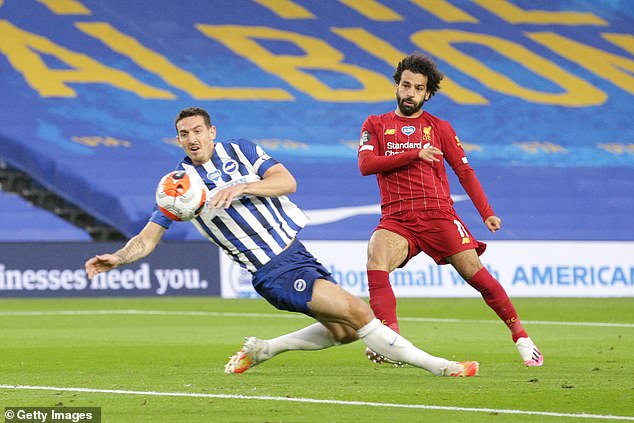 Those were not the views of Graeme Souness though, who hailed Salah’s ruthless streak in attacking positions after he netted yet another brace.

‘He was at it tonight, wasn’t he? From the first minute,’ Souness said on Sky Sports.

‘It’s important to him, you see his reaction when people weren’t finding him late on in the game.

‘He was shooting at every opportunity, his team-mates wouldn’t have been happy on two or three occasions.

‘Tonight he’s been selfish but that’s because he wants that Golden Boot. All goalscorers are greedy at times, I think he takes it to another level.’ 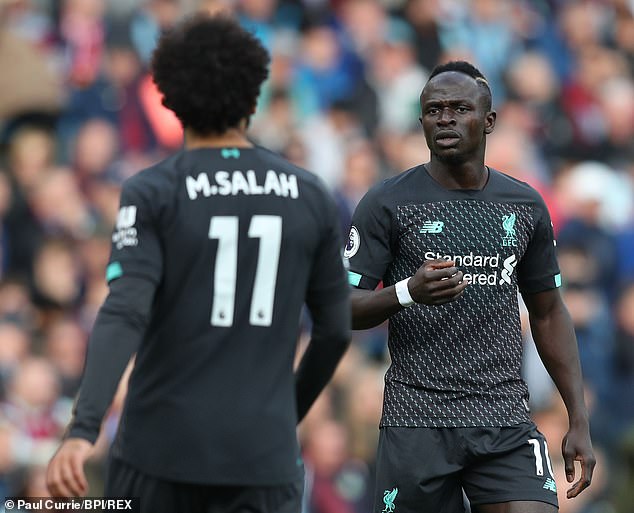 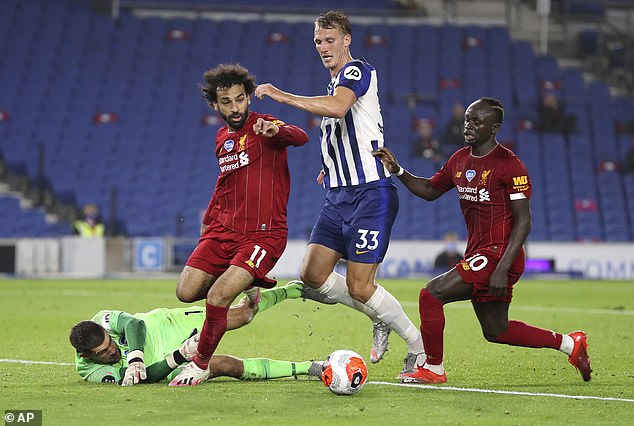 Salah’s penchant for scoring himself has caused issues in the past, none more public than with Sadio Mane away at Burnley back in August.

Liverpool were up 3-0 and, bearing down on goal, Salah elected to try his luck himself rather than square unselfishly for Mane, who was still seething when he was taken off and subbed by Jurgen Klopp,

The pair later addressed that the incident was ‘forgotten’ and they have clearly put their issues to one side, combining beautifully to help Liverpool to a first league title in 30 years.

But what do the statistics show about Salah’s willingness to share the glory in front of goal?

Salah has chalked up nine assists this campaign, the same amount as Andy Robertson, David Silva, Wolves star Adama Traore and Tottenham’s Son Heung-min so clearly he is willing and able to put chances on a plate for his colleagues. 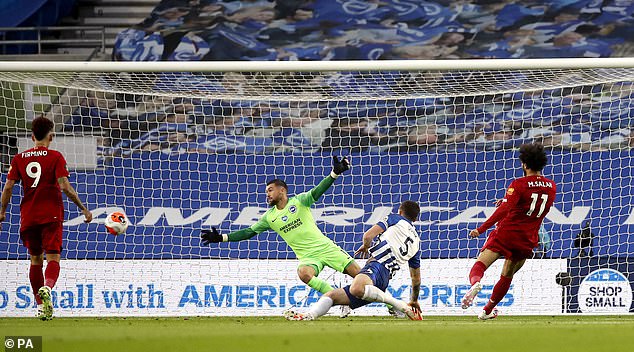 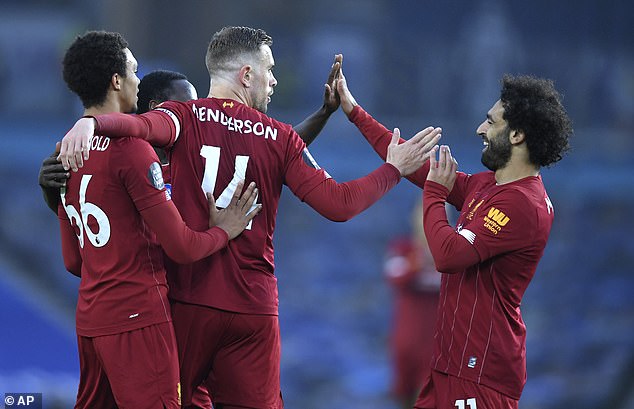 But a deeper dive into Salah’s shooting stats suggest there is an argument that he should go for goal first rather than lift his head up and look for other options.

He has taken 116 shots in the Premier League this season, eight more than his closest rival in Wolves’ Raul Jimenez.

But the most telling statistic is the short conversion rate.

Salah has the fourth best in that area among the top 10 in the Premier League with 16.38.

That shows there is not much room for complaint when Salah is as reliable as he is in front of goal. 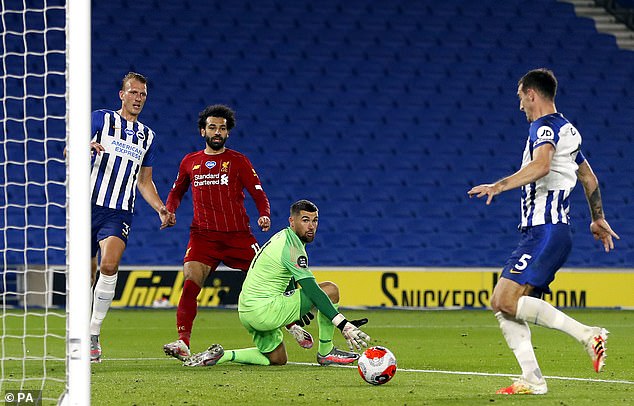 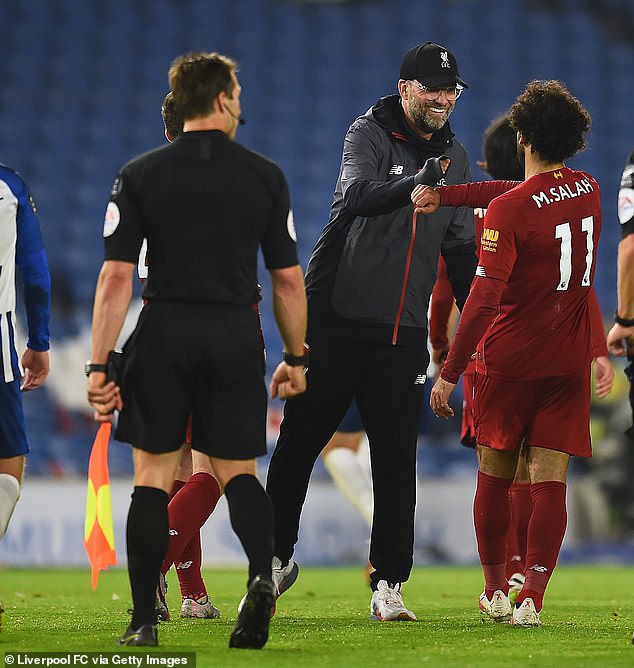 In fact, after Wednesday night’s win at the Amex Stadium, Salah now has an astonishing 100 goal involvements in 104 Premier League appearances.

And Salah’s motives in front of goal are obviously not an issue for his manager Jurgen Klopp, who hailed is star man after another mercurial display

‘He’s a striker, how can it not be a motivation for him? That’s clear,’ the German said after the match.

‘In the last two years he won the Golden Boot, last year he shared it with Sadio and with Auba. That’s always important, it’s important for Sadio and all that stuff is normal.

‘In the end you can only score goals when you perform well and he did that so that was really good and apart from that it’s all fine.

‘That’s nice, could have scored more, that’s true, but that’s pretty much all.’

There is no denying Salah could sometimes try and pick out a team-mate in a better position.

But with 94 goals in 148 appearances for the Reds since joining in the summer of 2017, you cannot argue that he has every right to go for goal as often as possible.

If it were not for Salah’s relentless performances over the past three years, it is doubtful the Reds would have reached the summit of domestic and European football.

Liverpool fans should be careful what they wish for. If Salah is told to pass too often, he may starting questioning those attacking instincts that have served him so well.

Doja Cat tested positive for coronavirus after downplaying it