Penguins can fire their faeces out of their rectum with such power they reach more than FOUR FEET away, scientists find

Much has been said recently about the safe social distance to keep from each other. When dealing with penguins, however, it seems ‘one metre’ is clearly not enough.

Experts from Japan have found that the aquatic birds can fire their faeces out of their rectum with such power they reach more than four feet (1.2 meters) away.

Their high ‘rectal pressure’ — which sees faeces fly at some 4.5 mph — allows penguins to ensure that both they and their nests stay unsoiled when they defecate.

This dynamic discharging, however, forces zookeepers to be wary of approaching penguins from behind when visiting their enclosures. 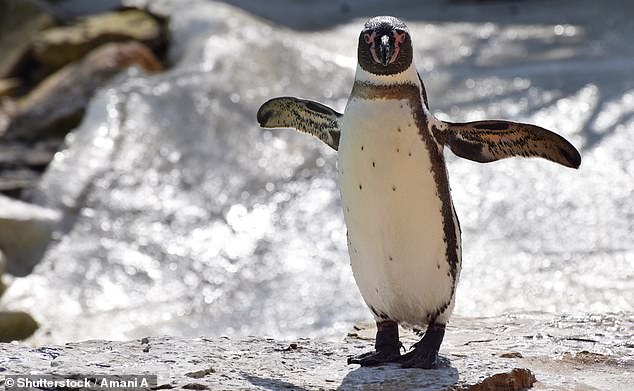 Experts from Japan have found that the aquatic birds can fire their faeces out of their rectum with such power they reach more than four feet away. Pictured, a Humboldt penguin

In their study, physicist Hiroyuki Tajima of Kochi University and Fumiya Fujisawa of Katsurahama Aquarium set out to calculate how far Humboldt penguins can fire their faeces — as well as the rectal pressure required to accomplish such a feat.

‘The flying distance of penguin’s faeces reaches about 0.4 metres [1.3 feet] even on the ground,’ the duo wrote in their paper.

While this may seem only a short distance, it is equivalent to the average height of Humboldt penguins themselves.

‘We found that penguin keepers should keep a distance of longer than 1.34 metres [4.4 feet] from penguins trying to eject faeces in the Katsurahama aquarium,’ the team wrote in their paper.

The researchers also calculated that the pressure inside a Humboldt penguin’s digestive track should reach around 28 kilopascals.

To put this in more relatable terms, this pressure in a human — one presumes with a decidedly aggressive stomach ache — expelling excrement to around a whopping 10 feet (or 3 metres) away.

Any person capable of such an impressive feat, the researchers conclude, ‘should not use usual rest rooms.’

‘Although we assume an ideal situation to obtain the numerical value, one can easily understand the incredible power of penguin’s rectum in this way,’ they added. 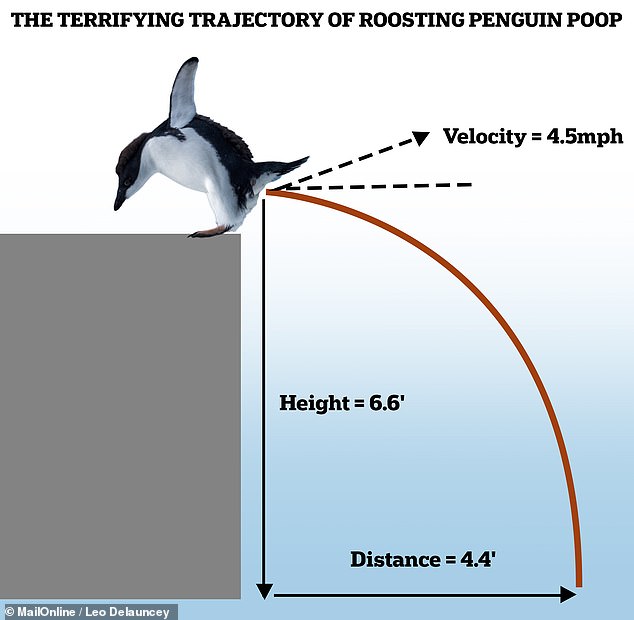 The aquatic bird’s high ‘rectal pressure’ — which sees faeces fly at some 4.5 mph when expelling from a typical 6.6 foot-high roost — allows penguins to ensure that both they and their nests stay unsoiled when they defecate

The study is a ‘crucial’ contribution that is ‘moving the science forward’, natural materials expert Chris Holland of the University of Sheffield told The Times — while cautioning that the team’s pressure calculations may be a little off.

‘There is surprisingly little known about the flow properties of animal faeces. As a result in this paper they have had to treat it as a Newtonian fluid, which means their best projections may be an overestimate.’

‘In reality faeces is more likely to be Non-Newtonian — a “funny fluid” — and far more complex,’ he said.

‘In the future it would be useful to understand the surface tension of the faeces so that one could predict if it is likely to jet or mist upon release, and how it would splash, so that the workers could take measures [to avoid it] accordingly.’

A pre-print of the researchers’ article, which has not yet been peer-reviewed, can be read on the arXiv repository. 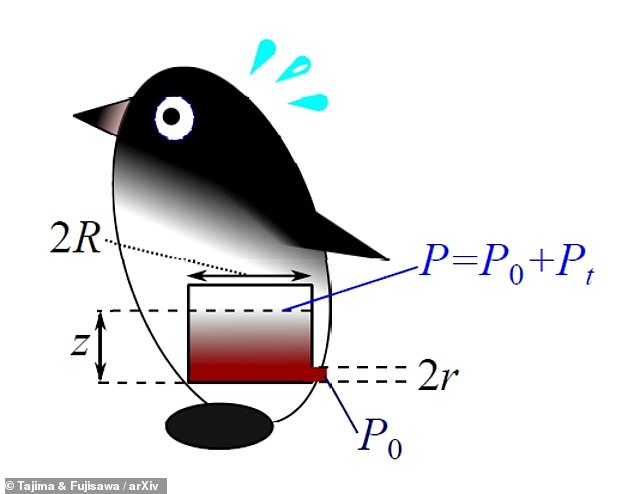 P-P-Pooping penguins: the researchers also calculated that the pressure inside a Humboldt penguin’s digestive track should reach around 28 kilopascals. Pictured: in their paper, the researchers modelled a penguin’s digestive system as a cylindrical tank with radius R and sphincter aperture radius r, allowing them to calculate the stomach pressure, P 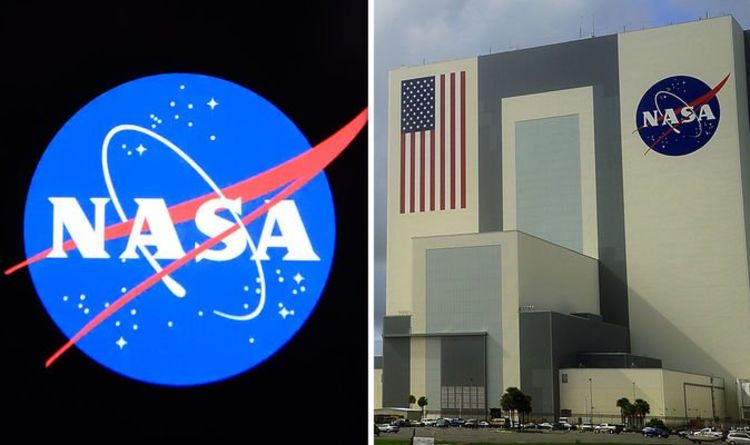 The red, white and blue brand was designed by employee James Modarelli in 1959, the second year after the space agency launched. […] 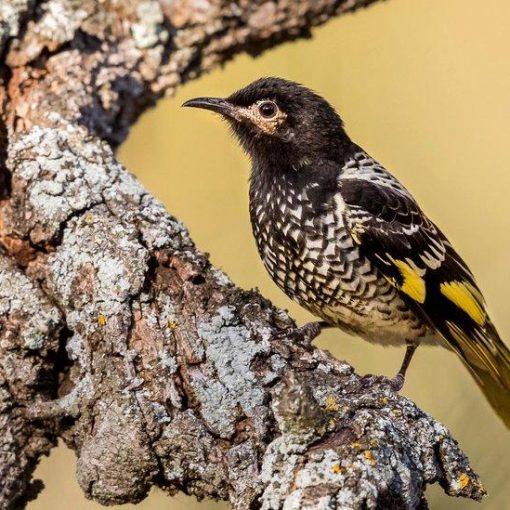 A rare songbird has become so threatened that it has started to lose its song, say scientists. The regent honeyeater, once abundant […] 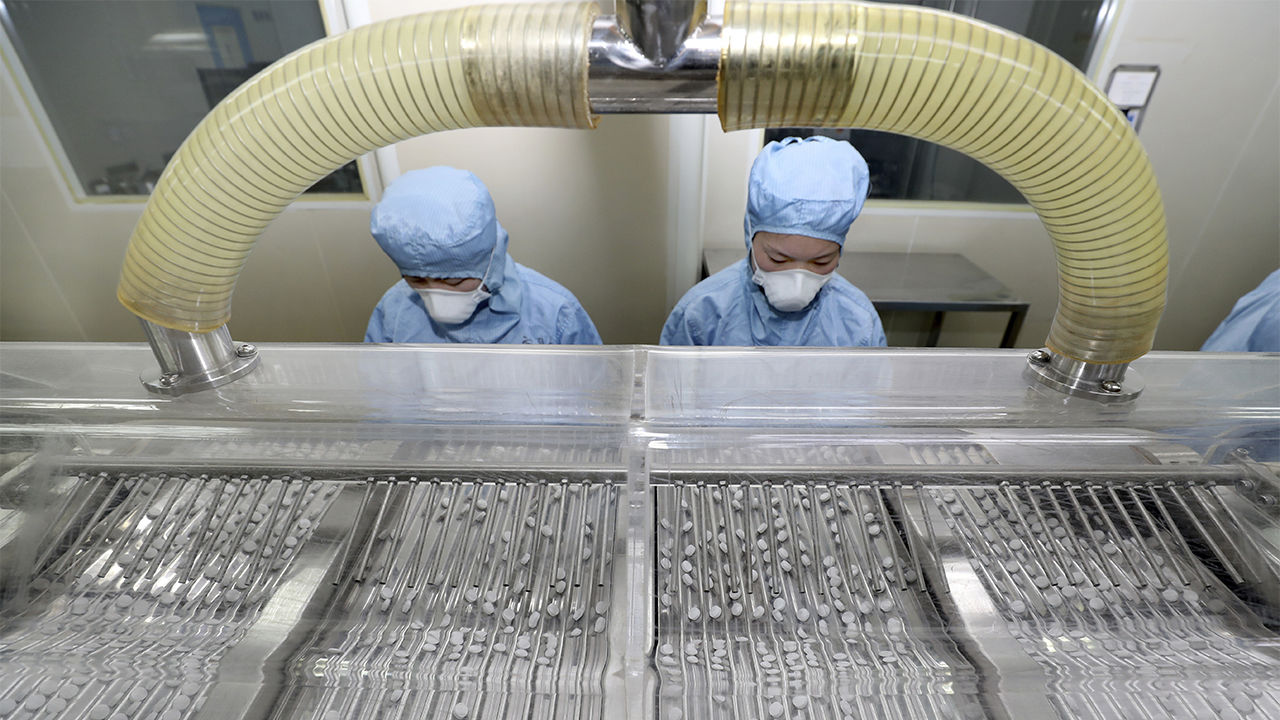 Pharmaceutical manufacturers have ramped up production of chloroquine amid hopes that the antimalarial drug will prove effective against COVID-19. FeatureChina via AP […] 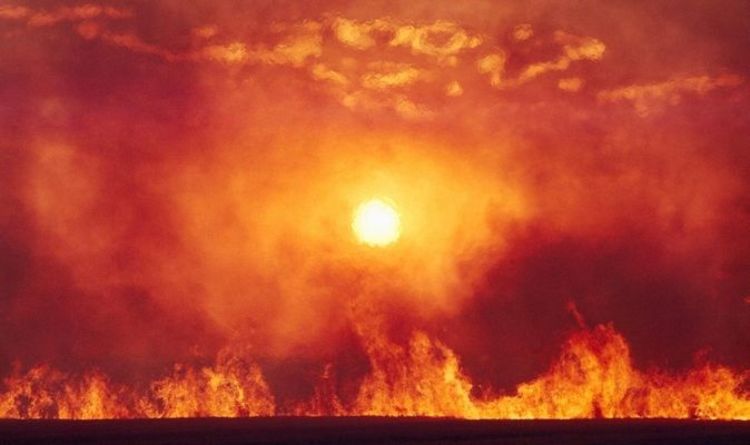 Change needed to happen “years ago” in humanity’s battle against climate change, according to Massachusetts Institute of Technology (MIT) associate professor in […]