Last week must have been car week because I was getting news releases that had Tesla last on the latest JD Power survey while the company again became the most valuable car company in the world. That report was pretty interesting because I think it spoke more to expectations than absolute initial quality, but I’ll get to that.

I also got a press release that talked about how Ferrari was losing less money than the major German brands. The implication being that Ferrari is doing a better job of engaging with its primary audience than the other brands — and that affluent audience isn’t being hit as hard by the pandemic.

Last month Mercedes and Nvidia announced a relationship that could massively improve Mercedes’ engagement, could propel the company to out-execute Tesla, and help pivot it to a Cars as a Service (CaaS) model.

Let’s talk about tech and cars this week, and we’ll close with my product of the week: a new robotic bartender from Keurig, which becomes more impressive the more you, hic, use it.

Now the heading of the JD Power story said it was a ranking of the “most reliable car brands,” which once again prompts me to encourage people to read things, because that isn’t at all this study did.

What the survey seemed to do instead measure was expectations. The more you pay for a car, the higher your expectation that it will be trouble-free. But more expensive cars are more complex, they are more often built to order, and there is more opportunity for things to go wrong. If you buy a Dodge, your expectation is low, and the complexity is low; if you buy a Tesla, you think you’re buying an advanced appliance — and as good as Tesla is, the car isn’t there yet.

What I mainly found fascinating is that Jaguar, Mercedes-Benz, Volvo, Audi, and Land Rover were all at the bottom, just above Tesla. Except for Land Rover and Jaguar (which have had historical quality issues) the others typically rank towards the top in terms of customer loyalty, which suggests these brands do some things right — and Volvo, in particular, is a brand connected to very high durability.

So the major premium brands do have an expectation problem, and Tesla, I know, has a considerable quality-control problem. A friend of mine just bought one, and Tesla not only got the build wrong (wrong accessories and he didn’t want the white interior he got), the paint had visible defects. But he still loves the car and is very excited about the performance and experience.

The ability to manage expectations and maintain loyalty is what I think the car industry is, as a whole, forgetting. Success is tied to customer loyalty and a healthy sales channel. Tesla owns its sales channel, which allows them to manage problems better. However, although those problems make the company less profitable, they don’t bubble up to a point where they get addressed in a timely fashion.

However, because of that direct sales channel, Tesla builds a deep relationship with its customers, and they were the first to explore long-term customer relationships truly. For instance, a Tesla regularly gets software updates with additional capabilities, not just bug fixes. So an update is often kind of a like a birthday or Christmas gift.

Tesla also has rolled out programs that even allow you to update your car or replace it with the loaner you get when your car is in for service. They’ve had promotions for cool things like bikes and surfboards tied to the brand, and they seem to be willing to explore ways to engage with customers between cars. This behavior is in contrast to most car (and even motorcycle) brands that seem to care about you only when you are in the market for a new vehicle.

Tesla is getting very close, particularly if you lease one, to the concept of CaaS.

What Tesla is doing to Mercedes is somewhat similar to what Apple did to firms like Nokia, in that neither Tesla nor Apple was taken seriously. Even after both firms spun their respective markets, their models of vertical integration through sales and higher engagement were discounted as unsustainable.

Now, if you want to beat Apple or Tesla, the model most likely to work is the one that knocked IBM out of their leadership role in the 1980s. In a way, that is how both Microsoft and then Google took their respective markets from IBM and Apple. You partner and gain economies of scale, and a level of innovation, that an integrated company can’t match. You see, if you introduce competition within the process, you can, as these firms showcased, better optimize the result in terms of value.

It isn’t Google fighting Apple’s iPhone; it is Google + Samsung + Motorola + Sony, and so on. The effort has to be tightly coordinated, but the result can be potent.

So if you take the leader of car intelligence, one that understands concepts like PCs as a service (PaaS), and Software as a Service (Saas), you have the potential to redefine the car market with a more engaging solution than Tesla now offers — and you have the potential increased economies of scale provided by the combined Mercedes/Nvidia partnership.

The Results of Intelligence

While we talk about car intelligence in terms of autonomous driving, there are other aspects to the automotive experience that could be significantly enhanced more quickly by making them intelligent.

Nvidia’s solution is, by most measures, a small supercomputer, and it has been designed to make autonomous decisions. The car could emulate a personality, it could learn about you, and it could better customize itself to your unique needs. It won’t get tired or angry, it won’t get drunk or abuse drugs (you might want to watch that racing fuel), and the upgradeable nature of the result will better allow for future upgrades by the owner.

Downloadable apps could include improvements to the autonomous vehicle system, updated targeted entertainment for those not driving, in-car coaching (your car could teach you to be a better driver, or give you advice on how to improve your track times). It could sense if you are impaired and either call for help if there was a medical emergency, such as a heart attack; or refuse to start in the event of substance abuse. The vehicle could better entertain your kids with location-tied games and activities on a long or short trip, do better automatic routing, and help you discover new places to eat when you are hungry.

It could change the lights and music automatically based on your mood, or the nature of your guest (think date mode). It could provide you with what you need to fight a wrong traffic ticket, call for help if you are in trouble, and shock you out of doing something road rage related that could put you in jail.

In short, with this combination, the car could begin to evolve from something we artificially anthropomorphize into something that is more like a pet, or even a friend.

When I was young, I read the book “The Number of the Beast” by Robert Heinlein. In it, there was a car named “the Gay Deceiver” (clearly a name that means something very different now), but what the car had was an AI, and kind of like KITT in Knightrider, rather than being a prop, it was a main character in the story. The car had a Continua Drive that let it explore the worlds of Star Trek, Barsoom, and other fictional universes, which probably won’t be a Mercedes option any time soon. But even there, an AI could, with smart display glass windows that transform into displays, make you feel like you were in those worlds once it was self-driving. Imagine on a long trip looking out those virtual windows and seeing the real or fictional Mars landscape.

The potential for Mercedes and Nvidia to change the very nature of personal transportation is carried within this partnership. This combination could be magical, both in terms of creating a better alternative to Tesla, and a deeper relationship between you and the company providing your CaaS.

You may recall me pointing out that the robotic bartender from Bartesian was listed as one of the things making staying at home pleasant for me. Well, right after I wrote that we got the Keurig Drinkworks in, and it is arguably better in some exciting ways. The big thing for us is that my favorite drink is a Mai Tai, and my wife’s is a Mojito — neither of which the Bartesian makes (yet, I understand they are coming).

While both use drink cartridges, the Drinkworks cartridges contain the alcohol. It chills the water and it has a carbonator built in. So it can make a wider variety of drinks, and they don’t get watered down as quickly by melted ice. I find the quality is more consistent with the Drinkworks. While I can pick my alcohol with the Bartesian, not all alcohols are created equally. Some do change the intended flavor of the drink — and not for the better. 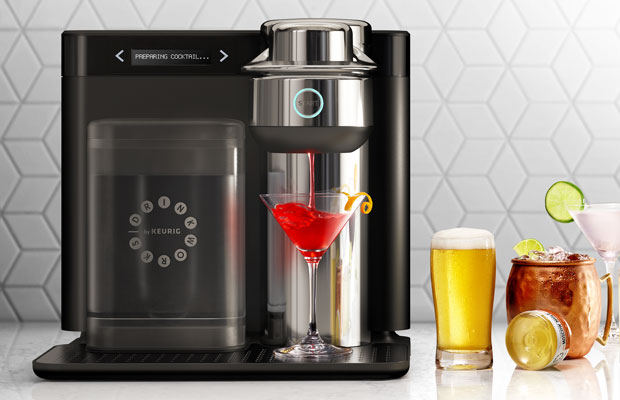 During these times when bars are again closed and drink takeout isn’t yet a thing (for a good reason), these robotic bartenders are simply awesome. We aren’t getting rid of the Bartesian any time soon either. Having both units allows us to more quickly produce drinks for those now-rare situations when we have guests.

Although there may now be an AA meeting in my future (I rarely have more than one drink a day), until then, Keurig Drinkworks is my product of the week.

New 55,000-pound Gundam robot in Japan can move its limbs like a boss

Galaxy Watch 3 is seriously expensive, but Samsung is trying to soften the blow

Motorola Moto G 5G Plus review: This phone proves why its Android rivals cost far too much