Thousands of Americans ditched traditional cookouts on Independence Day to fight for a re-imagined country with scores of protests spattered across several cities – including an American flag burning in New York City – as tensions over racial inequality and coronavirus spikes mount.

The last several weeks have been a particularly divisive time in the United States as an invisible battle line has been drawn between civilians over a number of issues from law enforcement to face masks.

The arrival of the Fourth of July on Saturday was not a cause of celebration for a number of Americans who believe the fight for freedom on the 224th Independence Day is far from over. 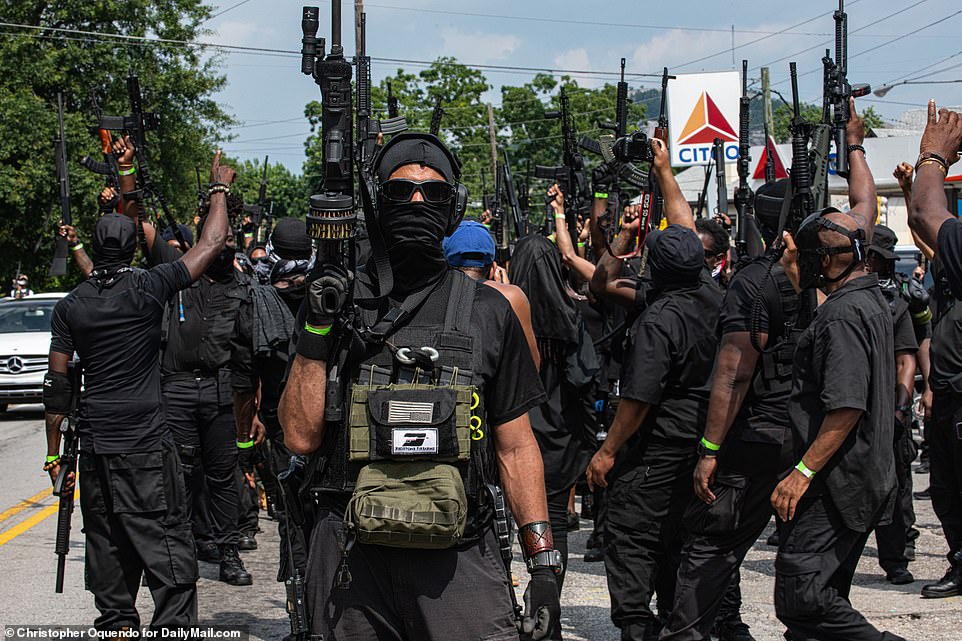 A large group of Black Panther Party members descended onto Stone Mountain Confederate Memorial – a site where the Ku Klux Klan, a hate group that was formed by Confederate Army veteran, held its rebirth ceremony atop mountain in 1915 with flaming crosses 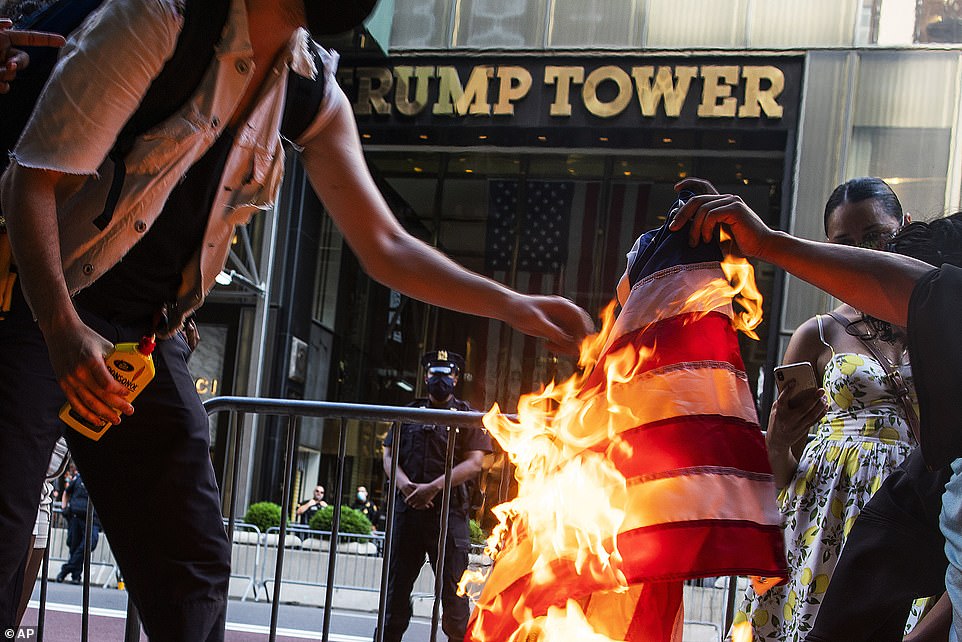 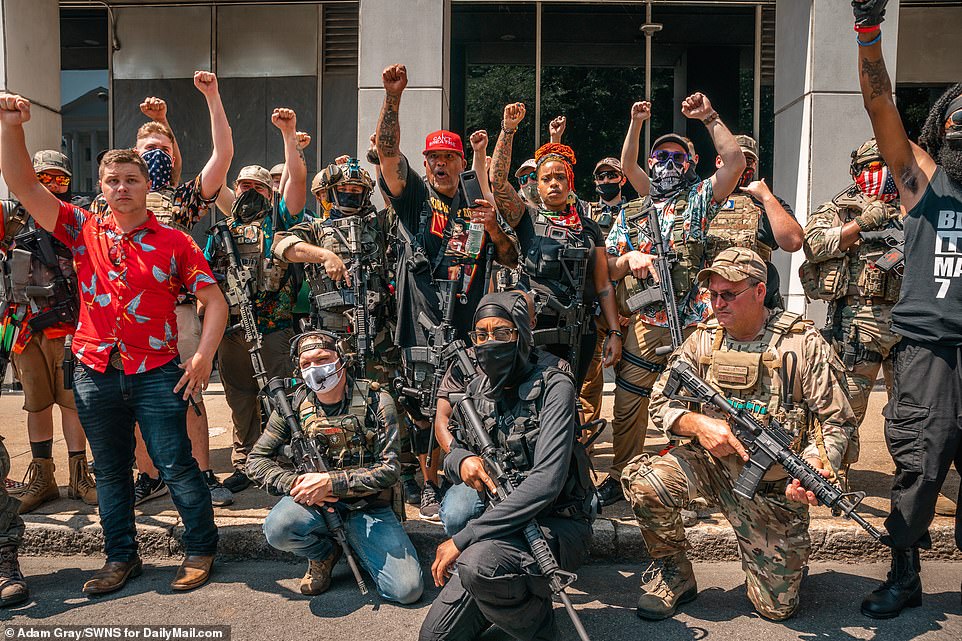 Second Amendment groups gather to protest in Richmond, Virginia, to fight for open carry laws in defiance of Gov. Ralph Northam and in remembrance of gun violence victim Duncan Lemp 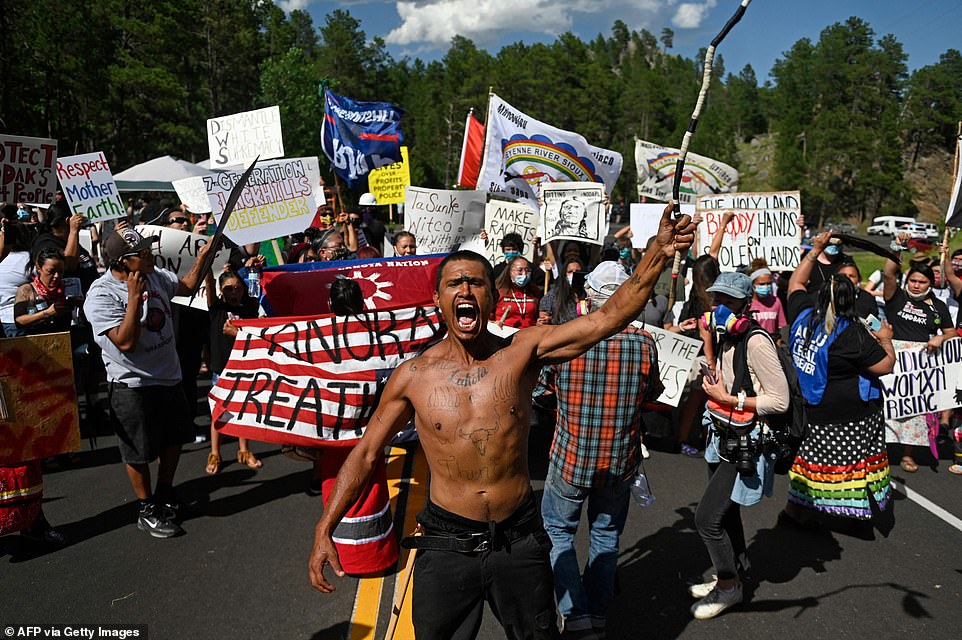 Activists and members of different tribes from the region block a road as they protest in Keystone, South Dakota, on July 3 during a demonstration around the Mount Rushmore National Monument and the visit of US President Donald Trump

In Georgia, as many as 100 reported members of the Black Panther Party descended into Stone Mountain Park as calls to remove the Stone Mountain Confederate Memorial boomed.

Stone Mountain Confederate Memorial, a nine-story-high base-relief sculpture carved into a sprawling rock face northeast of Atlanta, is perhaps the South’s most audacious monument to its pro-slavery legacy still intact.

Despite long-standing demands for the removal of what many consider a shrine to racism, the giant depiction of three Confederate heroes on horseback still towers ominously over the Georgia countryside, protected by state law.

It, as well as many other Confederate statues, have become a debate between Americans who argue they celebrate hate ideologies and those who believe it honors the traditions of the South. 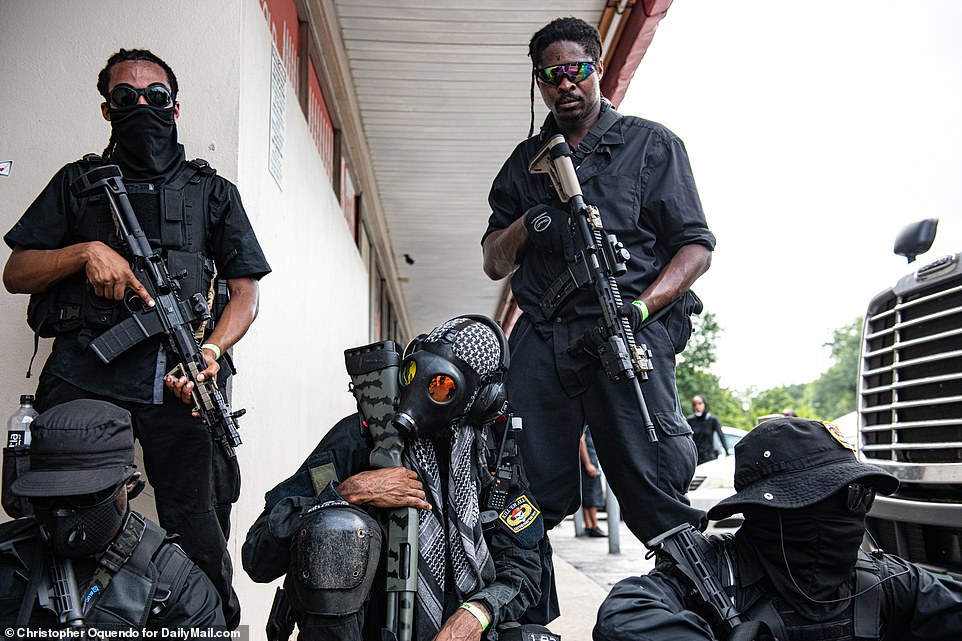 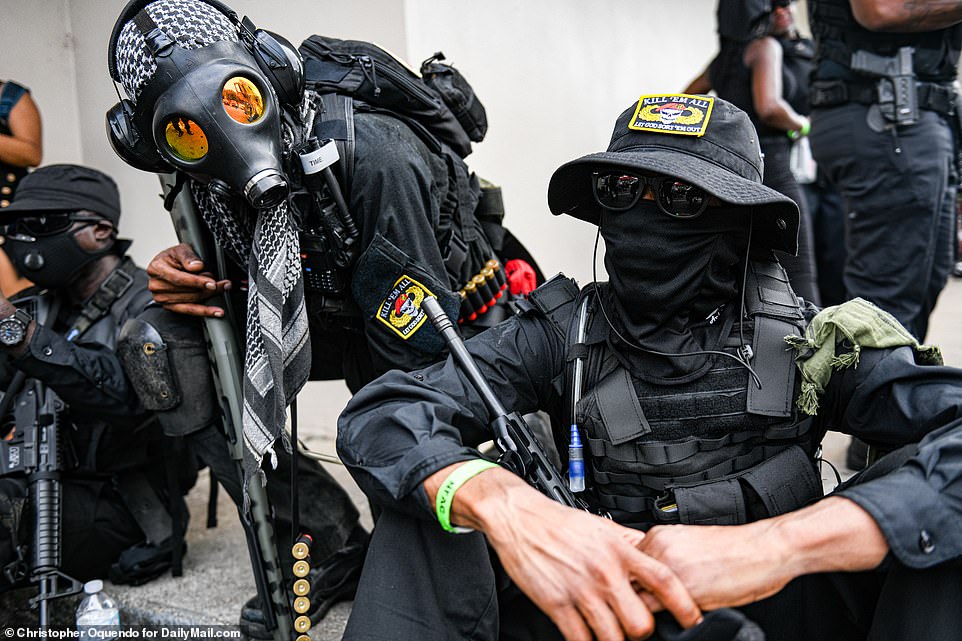 Pictured: Members of the Black Panther party armed with assault weapons arrive to Stone Mountain Park in Georgia as a controversial Confederate monument reopens on Saturday 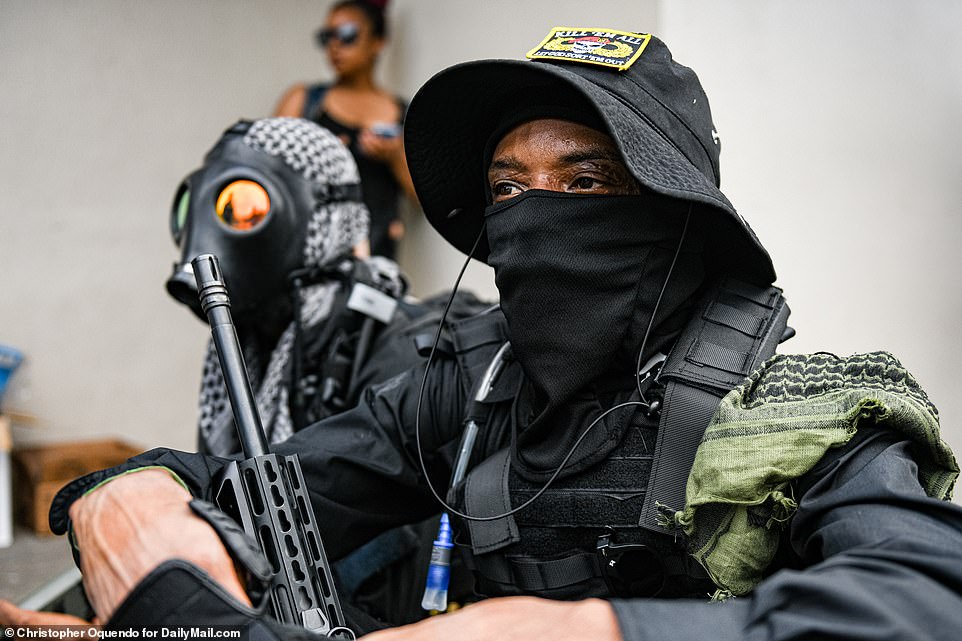 Gerald Griggs: ‘Here we are in Atlanta, the birthplace of the Civil Rights Movement and still we have the largest Confederate monument in the world. It’s time for our state to get on the right side of history’

The political group was initially founded to monitor the behavior of Oakland Police Department officers, who were accused of police brutality, with armed civilian patrols called ‘copwatching.’

More than  50 years later, the current protests over police brutality have picked up where the founders left off after the death of George Floyd and several other Black Americans by law enforcement.

‘Here we are in Atlanta, the birthplace of the Civil Rights Movement and still we have the largest Confederate monument in the world,’ said Gerald Griggs, a vice president of the Atlanta chapter of the NAACP civil rights group, which staged a march last week calling for the carving to be scraped from the mountainside.

‘It’s time for our state to get on the right side of history.’

Stone Mountain has long held symbolism for white supremacists. The Ku Klux Klan, a hate group that was formed by Confederate Army veterans and has a history of lynchings and terror against Black people, held its rebirth ceremony atop mountain in 1915 with flaming crosses. 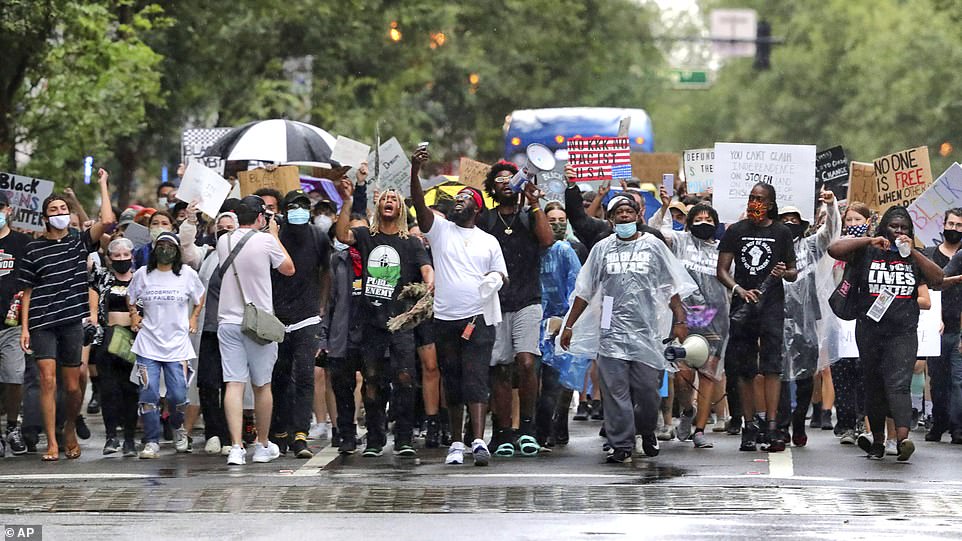 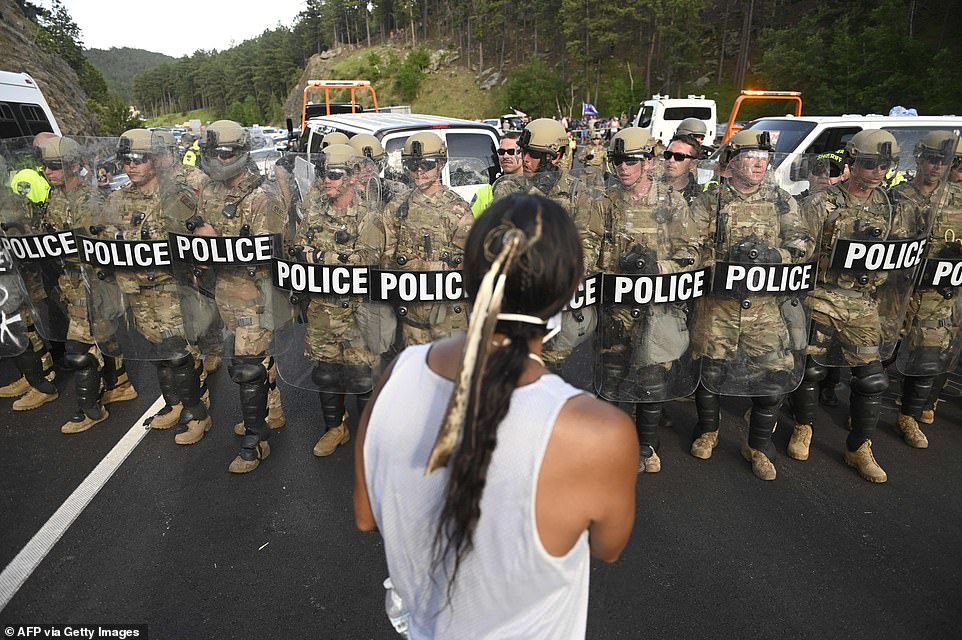 Pictured: A man faces a row of police as activists and members of different tribes from the region block the road to Mount Rushmore National Monument in Keystone, South Dakota on July 3

Longer than a 100-yard American football field, it features the likenesses of Jefferson Davis, the president of the 11-state Confederacy, and two of its legendary military leaders, Robert E. Lee and Thomas ‘Stonewall’ Jackson, notched in a relief 400 feet above ground.

The Sons of Confederate Veterans is an organization that staunchly defends Stone Mountain and other Confederate statues and emblems.

Dedicated to teaching the ‘Southern Cause,’ according to its website, it believes their removal is akin to purging American history.

Klansmen still hold occasional gatherings in the shadows of the edifice, albeit now met with protesters behind police tape. Many of those cross-burnings took place on or around July 4

But with the rise of the Civil Rights Movement, segregationist officials in the state pushed for the creation the Stone Mountain Memorial Association in 1958 and purchased the park. The carving was completed in 1972.

‘This debate has been going on for years, and we’re sensitive to it,” John Bankhead, a spokesman for the group, said.

‘We want to tell history as it is, not as some say it is.’

Further north, residents brought their fight to the front steps of President Trump’s 58-floor Trump Tower on Saturday with chants, protest signs and even several instances of flag burning.

Footage taken outside of Trump Tower near New York City’s Columbus Circle showed a large group of demonstrators reportedly with the Revolution Club preparing to set the flags ablaze.

A speaker at the event cited ‘police murder, terror and mass incarceration of Black and Brown people’ as one of many for why the ‘United States of America is irredeemable.’

A large America flag was set on fire while people chanted ‘slavery, genocide and war…America was never great.’

The burning flag was then set on the ground and fellow protesters used to fire to lit smaller American flags. 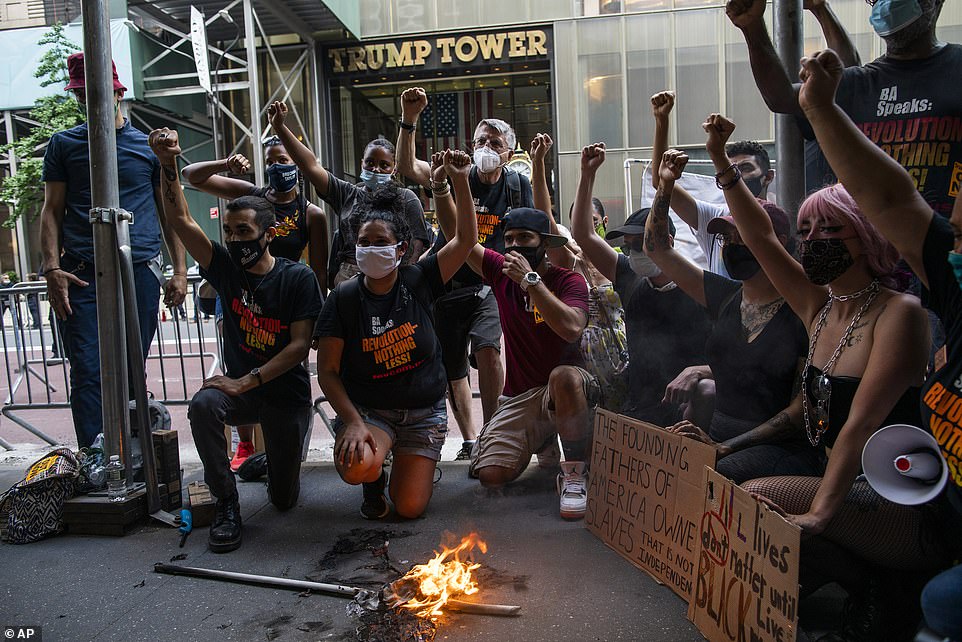 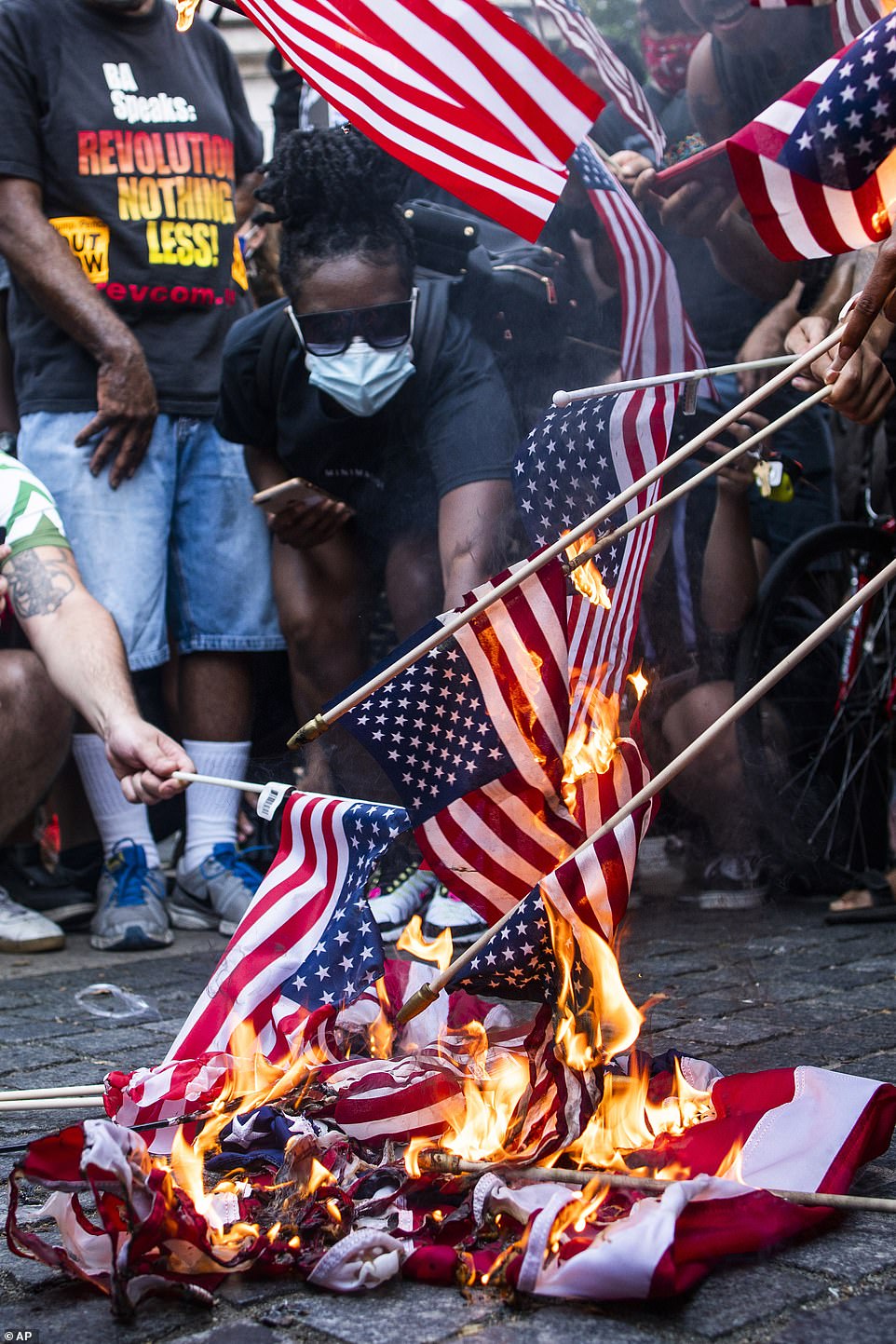 According to FNTV, the group did one flag burning in Columbus Circle and one directly in front of Trump Tower.

New York City Police Department officers were reportedly at the scene and watched as the American flags were burned.

The groups reportedly ‘refuse(s) to celebrate the whitewashing of this country.’ 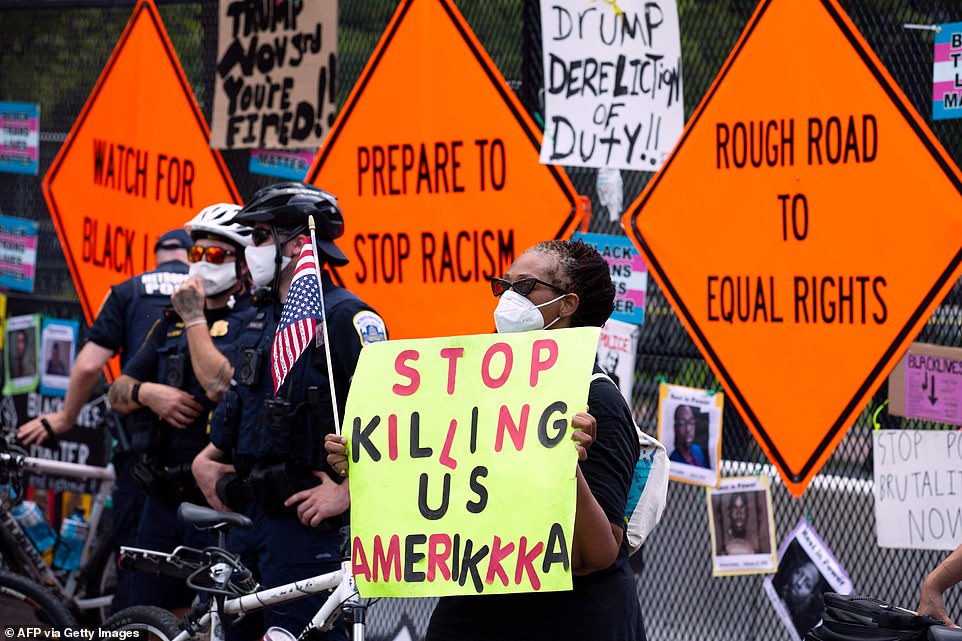 Angela Moore (center), holds a US flag upside down and a sign that reads ” Stop Killing” while standing near policemen during a small standoff between police and protesters in front of Lafayette Square near the White House in Washington, DC 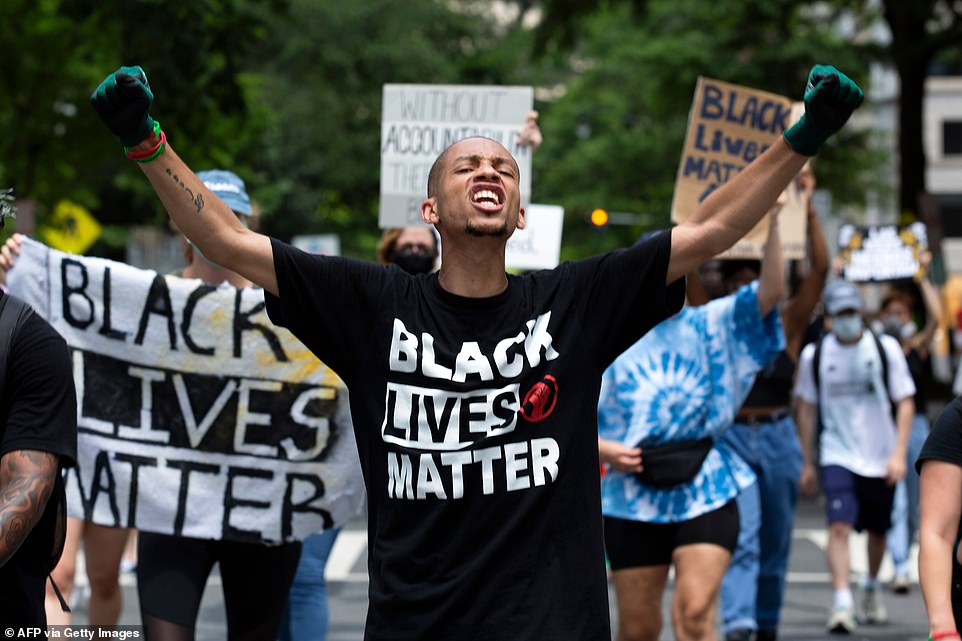 A protester shouts at a line of policemen during a small standoff between police and protesters in front of Lafayette Square near the White House in Washington, DC 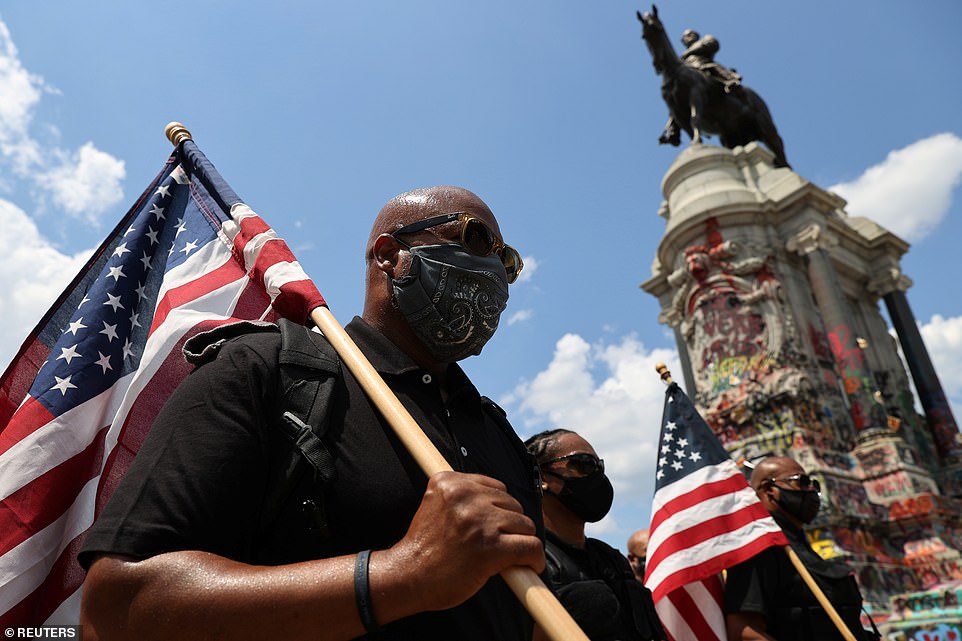 Protesters in Richmond, Virginia, gathered near the now-defaced Robert E. Lee statue on July 4. The Confederate monument was one of many that have been damaged since protests began in May 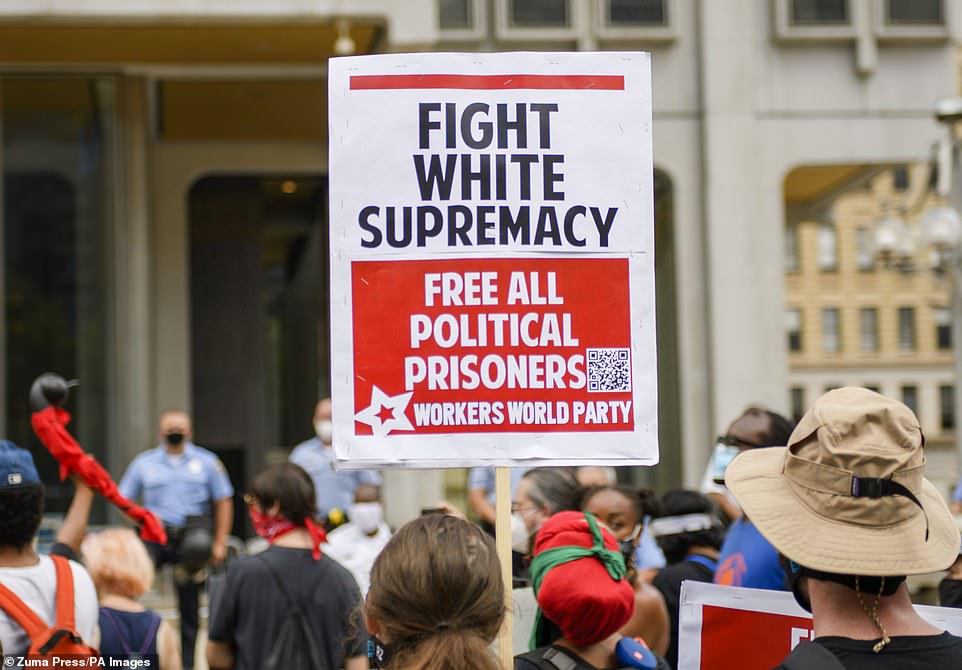 A sign reading ‘Fight White Supremacy Free All Political Prisoners’ is hoisted into the air at a Fourth of July Black Lives Matter demonstration in Philadelphia, Pennsylvania 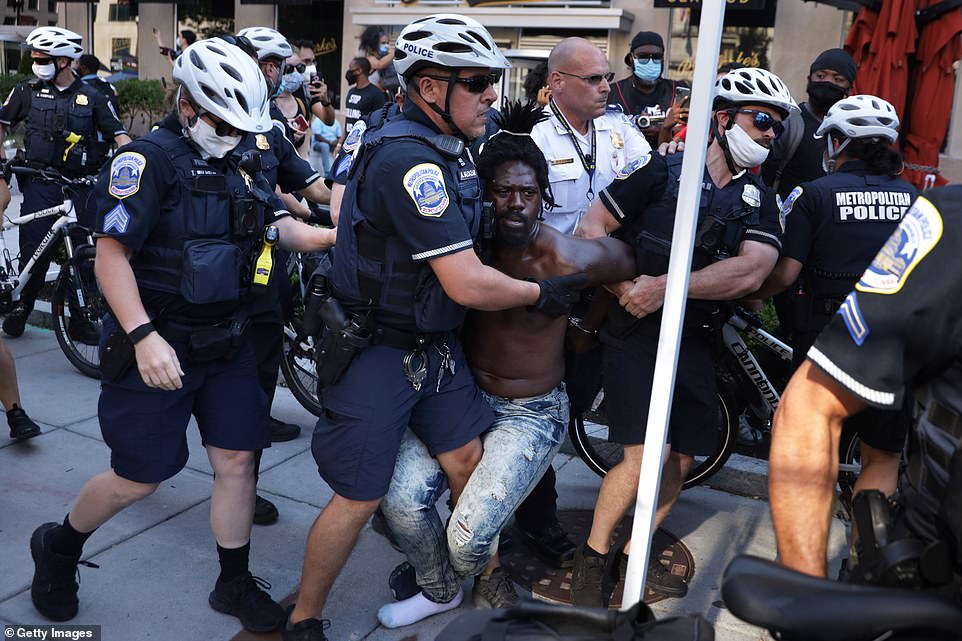 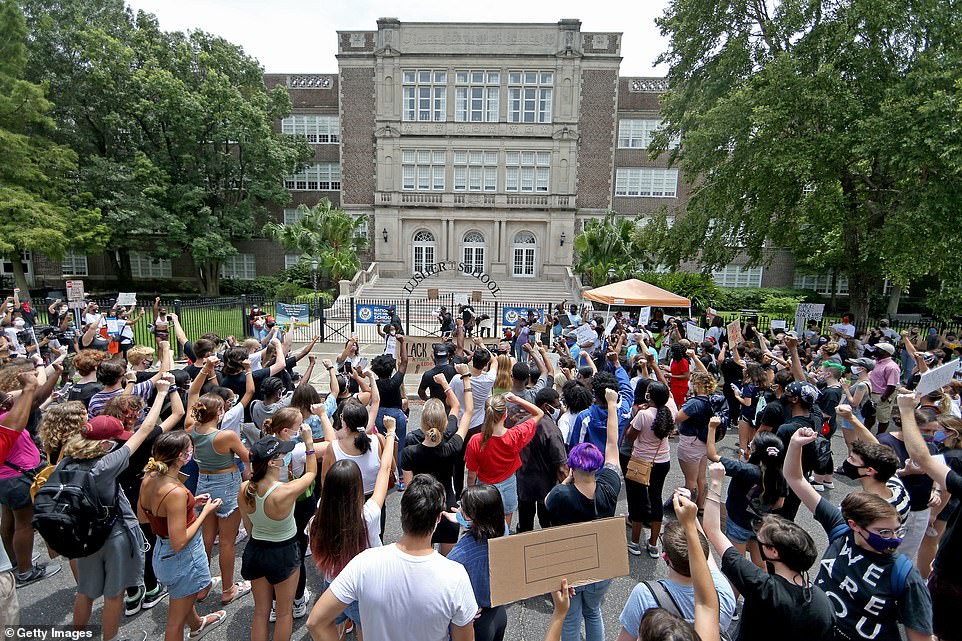 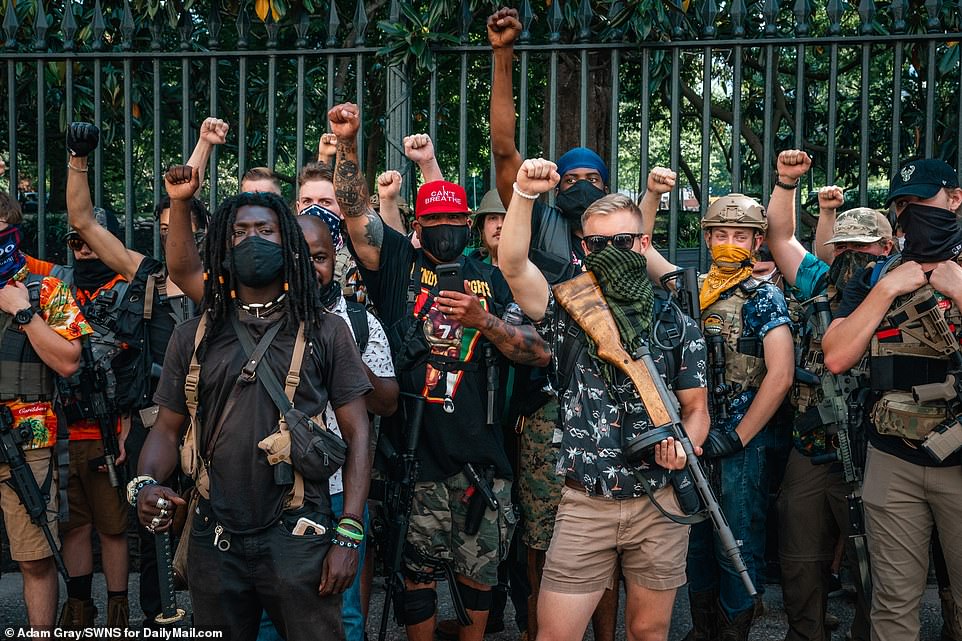 Demonstrators fighting for Second Amendment rights on Saturday gathered in Richmond, Virginia, and were joined by members of other groups like Black Lives Matter and militia organizations

Biden's choice of a Black woman for VP is historic. It could also help him win.

How to tell if your child is sick from Covid-19, based on pediatricians' advice

Kamala Harris: A pragmatic progressive different from Biden in many ways