By Michael Thomsen For Dailymail.com

NASA has released a stunning new image taken from space that shows the devastating impact of the Bighorn Fire that swept across Arizona in early June.

Taken by NASA’s Advanced Spaceborne Thermal Emission and Reflection Radiometer (ASTER), the image shows a 20 miles by 30 miles stretch of the Santa Catalina Mountains just north of Tuscon, where the wildfire began.

The image has been processed to highlight what NASA calls the ‘burn scar’ on the land, shown in black and dark grey, while areas with unburnt vegetation shaded in red. 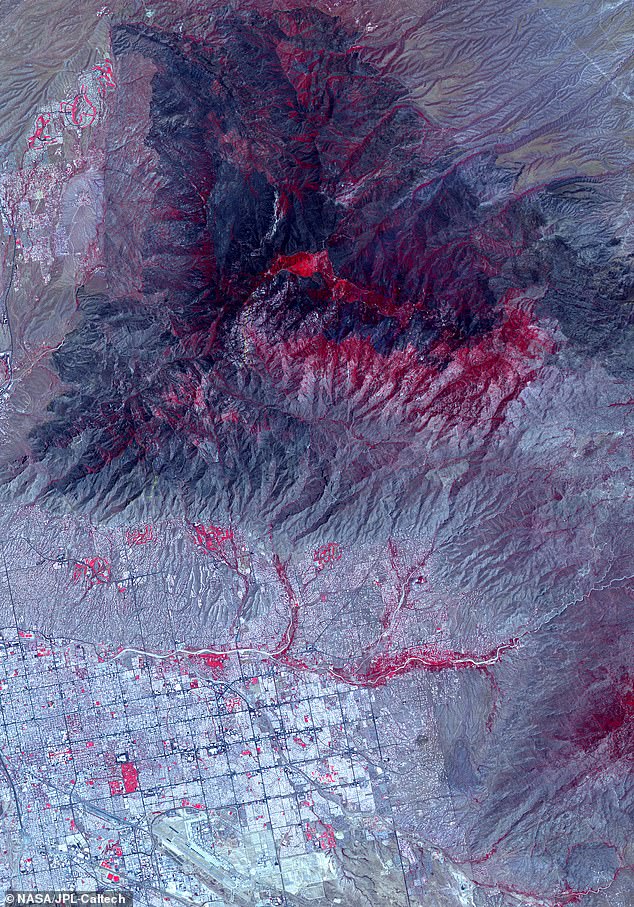 NASA shared an image from space of the Bighorn Fire, that started on June 5th outside Tuscon, Arizona. The black and dark gray images show the ‘burn scar’ left by the fire while the red areas are vegetation that wasn’t burn

The Bighorn Fire originally began on June 5, after a lighting strike ignited the surrounding area.

The fire spread rapidly, covering more than 114,000 acres or 48 square miles in just a few days, requiring more than 800 firefighters and emergency workers to fight it.

The fire was especially difficult to manage because of  plentiful dry vegetation for fuel while the mountainous landscape created air pressure differences that sped up the flame-laden winds.

‘It’s kind of like a chimney, the way the wind goes up the canyons,’ Dee Hines, a spokesman for the team fighting the fire, said.

‘Between the terrain and the wind, it’s been a really challenging fire,’ 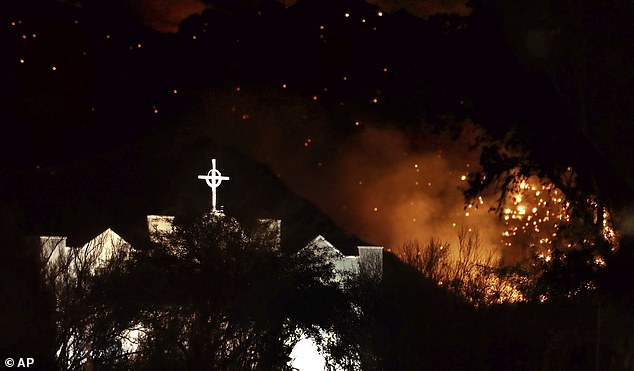 Local authorities say the Bighorn Fire was caused by a lightning strike, which ignited the dry vegetation and then spread rapidly over more than 48 square miles 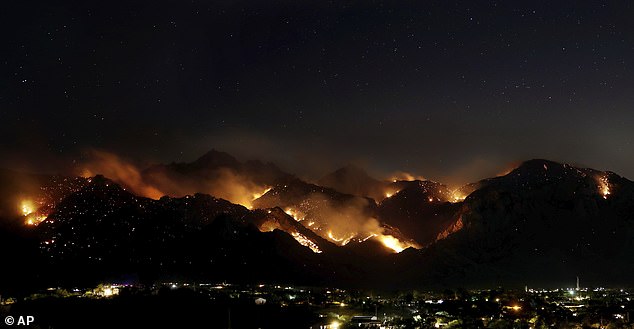 As of July 1st, the Bighorn Fire was still only 54% contained while between 130 and 150 homes in the area had been evacuated.

The Bighorn Fire was just one of three major wildfires in Arizona in June, with the Mangum Fire breaking out near the Grand Canyon National Park, and the Bush Fire sweeping over more than 180 square miles outside of Phoenix.

As of July 1st, the Mangum Fire was 67% contained, while the Bush Fire was 98% contained, leaving the Bighorn Fire as the biggest ongoing concern. 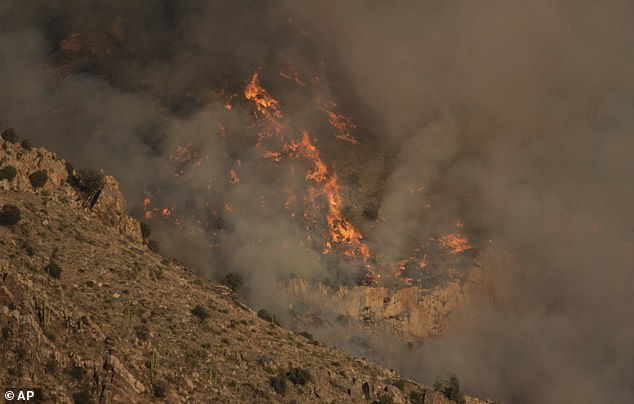 The fire spread so quickly due to the combination of plentiful dry vegetation to burn, and the mountainous terrain, which created air pressure differences that sped the firey winds. ‘It’s kind of like a chimney, the way the wind goes up the canyons,’ a spokesman said. 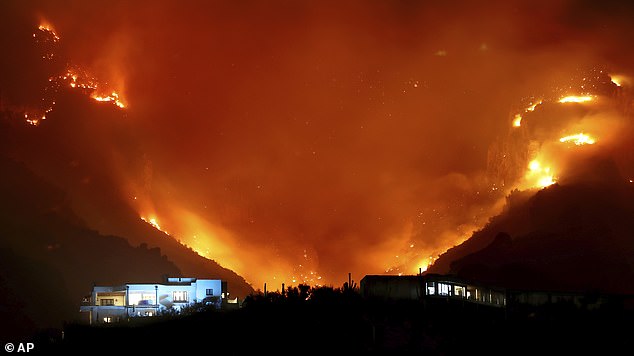 The ASTER satellite was originally launched in 1999 as a joint project with Japan’s Ministry of Economy, Trade and Industry to monitor large scale changes in Earth’s landscapes.

It uses a high spectral resolution imaging system that can take pictures of both visible light spectrum and infrared wavelengths, according to a post on NASA’s Jet Propulsion Laboratory news blog.

Images from the satellite have previously been used to help scientists study a range of subjects, including cloud formation, glacier advances and retreats, crop health, air pollution, and coral reef health, among many others.

HOW DO WILDFIRES AFFECT LOCAL TEMPERATURES?

Wildfire smoke lingering in the air can block out the sun enough to cause measurable temperature differences at the surface, even after the flames have died down. 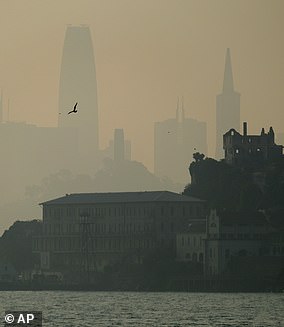 Pictured, the San Francisco skyline is obscured by smoke and haze from wildfires behind Alcatraz on Nov. 14, 2018

A study published earlier this year found that the cooling effect can even extend to river and stream temperatures.

Brown carbon, in particular, has been found to have a significant effect, as it is more likely than black carbon to reach higher levels of the atmosphere, according to NASA.

But, the space agency explains, ‘as particulate matter in the atmosphere, both can interfere with solar radiation by absorbing and scattering the sun’s rays.’

Brown carbon is a major product of wildfires, as it’s created when grasses, wood, and other biological material burns.

‘Most of the brown carbon released into the air stays in the lower atmosphere, but we found that a fraction of it does get up into the upper atmosphere, where it has a disproportionately large effect on the planetary radiation balance – much stronger than if it was at the surface,’ Rodney Weber, a professor in Georgia Tech’s School of Earth & Atmospheric Sciences, said last year in a study on the phenomenon.

The graph above shows the amount of sunlight reflected by the landscape after a forest fire in North America (NA), Eurasia (EU), north east Eurasia (NEEU), southern Eurasia (SEU) and northwest Eurasia (NWEU)

Fires can also cause temperatures to drop by transforming the landscape, and increasing a property known as albedo – or the measure of light reflected by a surface.

As vegetation is destroyed in the fires, there is less foliage to absorb the sunlight and its warmth.

Studies in recent years have found that the resulting cooling effect can linger for years, particularly during the winter months.

First poison arrows may have been loosed 70,000 years ago in Africa

Once praised for taming the pandemic, Asian-Pacific nations worry about new onslaught