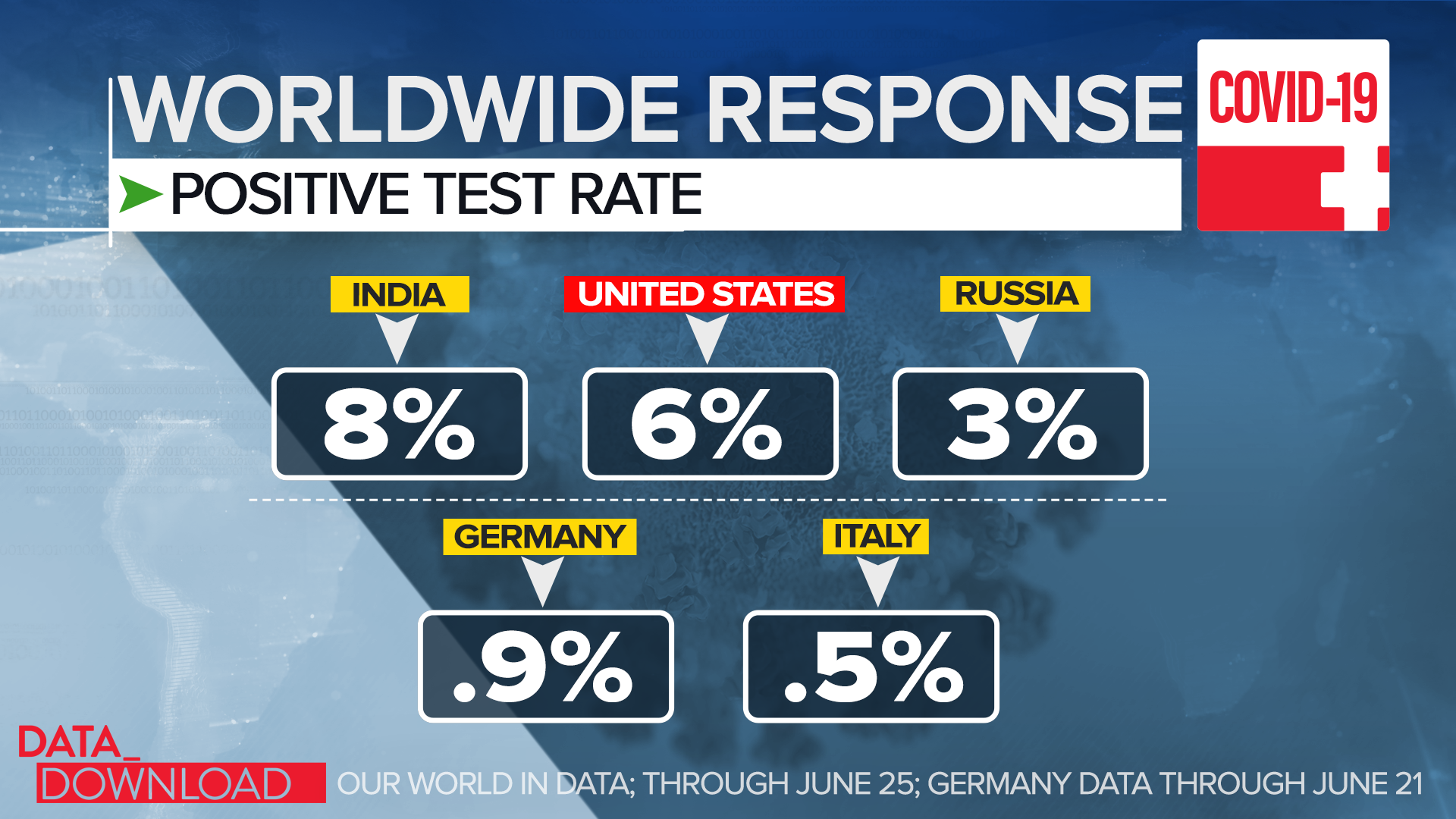 WASHINGTON — The global COVID-19 pandemic goes on and on, but not every country is experiencing the virus in the same way. As summer arrives, some countries are seeing much higher rates of new infections than others, and the United States is part of a group that is not faring especially well.

With a rate of 107 per million as of June 27, the United States has one of the highest new infection numbers in the world and its highest new case number so far, according to numbers from the Our World in Data project. Brazil is higher, with a seven-day average of about 168 new infections per million. But the United States is part of a group of countries where rates are high and/or rising. That group includes Russia and India, where the numbers are in double-digits per 1 million people, and some question if they are accurate.

On the other end of the data, Germany and Italy have made large strides in containing the virus as both were above 60 new infections per million people at one point and are now in the single digits. And New Zealand’s numbers have been consistently extremely low.

The differences in the size of the current problem raises the question of why, and a look at some key numbers shows a muddled answer.

First off, a nation’s overall wealth does not appear to be a driving factor.

In other words, sorting by wealth, the United States new infection rate number looks like something of an outlier — a wealthy country with a big new infection problem.

As is often noted, the United States spends more on health care than any other country: more than $9,900 per capita in 2016, according to the World Bank. But all that spending hasn’t stopped the new infection rate from rising quickly here in the last few weeks.

Again, the United States has new infection rates that look more like the countries that spend much less on health care, particularly Brazil and Russia.

Getting away from dollars, each nation’s COVID timeline does not seem like it plays much of a role either.

Of all the nations here, the United States has the earliest recorded COVID-19 case: January 21, 2020. The nation saw new infection spikes in April and May and then a decline before another new infection increase in the last 10 days.

But there isn’t really any pattern in new infection numbers in other countries tied to when the first case appeared.

And while some skeptics will argue the numbers are only rising because the United States is testing more now, the gap between the new case numbers in the United States and the top performing nations is vast and the data suggest other factors are driving the increase.

The point is sometimes the data show that underlying economic and health factors have a smaller impact than you might think, even in a pandemic. One thing the United States, Russia, Brazil and India share, however, is government leaders that have at times downplayed the impact the virus.

India’s Prime Minister Narendra Modi told his people yoga could help build a “protective shield” of immunity against the virus as the country has loosened its rules to aid the economy. In Russia, Vladimir Putin declared victory over the virus this week and held a massive public military parade celebrating the 75th anniversary of the country’s defeat over Nazi Germany. Brazil President Jair Bolsonaro has belittled the virus and not worn a mask (though this week a judge ordered him to wear one or pay a fine). And, of course, President Trump has begun to resume his large campaign rallies — which are mask-optional — as he mocks the virus.

None of this is to say those leaders are wholly responsible for their countries higher new-infection numbers. There is a wide range of societal factors in each country, from population density to the actions of local officials in each.

But as the pandemic continues and nations head down different paths, the politics and the data seem to be carrying a message. The voices at the top matter.

What we know about coronavirus risks to school age children

World could heat up nearly 3 degrees by 2024, warns United Nations

The Hope Mars mission: How to watch the UAE’s historic launch live

Tiffany Haddish has shaved her head — live on Instagram