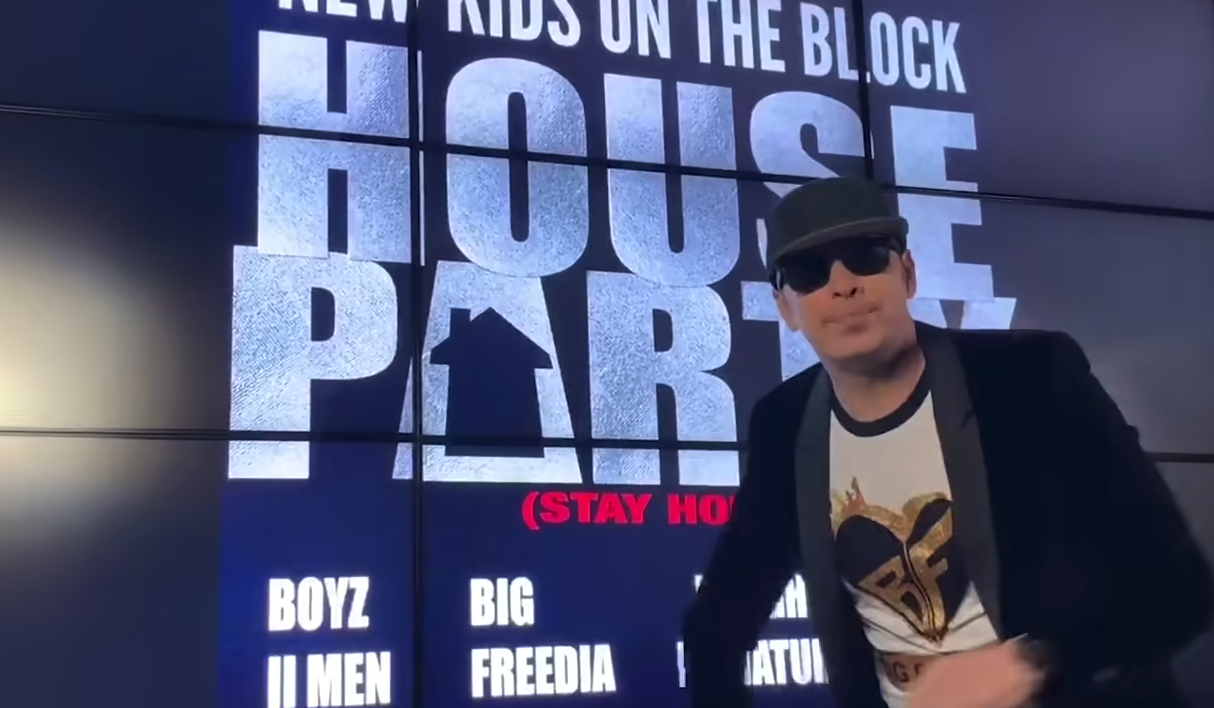 This time, New Kids on the Block really did have to take it step by step.

The pop band recorded their newest single, “House Party,” and the video for the song, which also features Boys II Men, Jordin Sparks and Naughty by Nature, while social distancing from each other.It wasn’t exactly easy.

“To pull off the song and video I had to have willing participants — which is why I only asked friends to be involved,” NKOTB member Donnie Wahlberg said by email of the tune, proceeds of which will benefit the charity, No Kid Hungry. “I sent new microphones and gear to each artist. They recorded on Garage Band and sent me their vocals. As for the video — smart phones can work wonders.

“The inspiration for me to write the song was hearing from so many fans who were trying to find relief from the stress and fears that we all seem to be feeling in the shutdown,” Wahlberg said.

Fans of all types of music are desperate for distraction and catharsis in the age of the coronavirus and because stay-at-home orders have shuttered movie theaters and shut down film and TV production, musicians are dominating the pop culture zeitgeist.

But it’s not all high notes for the industry.

Although artists can use technology and social media to reach a large audience, it is incredibly hard to monetize that passion. Even as states start to reopen, it appears that live gigs, whether in cozy clubs or cavernous arenas, will be among the last vestiges of pre-March 2020 life to return.

“This pandemic has affected so many different industries in different ways,” said rapper G-Eazy. “At the end of the day, I’m just grateful that we can all at least still experience and consume recorded music. Some industries are shut down completely.

“Of course, I miss touring, and it’s scary to think about how much longer we may have to wait until we can experience that again,” added the rapper, who recorded two new tracks, “Moana” and “Angel Cry,” in his home studio in Oakland, California. “But, like I said, I’m still grateful we can at least create and release music to the world.”

Artists are getting creative about how they make that music:

There will likely be more such anthems in the coming weeks and months.

During a major crisis in which people cannot come together physically to help each other cope, a common musical connection can be an important substitute, she said.

“There’s this amazing capacity that music has with today’s technology to hop from place to place extremely rapidly and constitute a shared experience even across the physical divide,” Margulis said.

That technology has given lesser-known artists a platform to shine, too.

Two months ago, Barcelona roommates Klaus Stroink, Guillem Boltó and Rai Benet were working-class musicians. To fend off boredom during quarantine, the trio started writing, recording and uploading a new song every day onto YouTube under the name Stay Homas. Within a week-and-a-half of their first video, they were receiving comments from all over the world. Once an Indonesian influencer posted a story about them, they suddenly had a legion of fans from that country.

“It’s very nice to see so many people enjoying our music,” said Stroink,”but It (doesn’t feel) like real people from South America or the Bahamas or from Indonesia who are really listening to the song. It’s hard to make a picture in your brain of that.

“I think the three of us are looking forward to playing some shows because it’s really strange not to see your audience.”

Those live shows are going to be important because Stay Homas is not currently making much money off their viral fame, though they said a planned July concert at a 1,200-seat venue sold out in 10 minutes.

“When our manager told us we sold out in 10 minutes, no we didn’t believe that,” Bolto said. “Who bought the tickets?”

Whether or not there will be any ushers collecting tickets in the near future is the real question. The trade group Pollstar projected the coronavirus could cost the live show industry $9 billion in lost revenue in 2020, roughly three-quarters of the previously projected box office for the year.

“The record labels won’t really have a problem weathering the storm, but the concert industry is in big trouble,” said Rolling Stone senior writer Brian Hiatt.

“Until they can tour again, even the biggest artists are going to take a big hit,” Hiatt said. “Especially indie artists who tour so much because most of their income comes from live shows.”

Hiatt also worries about whether older artists, those classic rock bands and ’80s pop acts that dominate the tour circuit, can take the stage before there is a widely disseminated vaccine. Recent tours hyped as the last chance to see those aging superstars may now turn out to be truer than originally intended.

These days, all artists have been forced to adapt — just like everyone else.

“I’ve been trying to stay positive and find the silver lining in all this – so from that perspective, quarantine has given me a lot of freedom and free time to create,” said G-Eazy, who is also using his quarantine to fund a lunch truck delivering free lunches to at risk youth in San Francisco.

“There’s no other circumstance where I’d ever have this much consistent time without any distractions, so I’ve been trying to take advantage of it.”

Experts raise a question about Elijah McClain's arrest: Why was he injected with ketamine?

Will Putin Really Return To The Kremlin in 2024?

He posted his regrets over attending a party in California. The next day, he died of coronavirus

Drug dealer arrested while sitting on the loo

Florida sets a record-high 10,000 new cases – but deaths are still not rising in the South

Hachalu Hundessa: 'My friend the hero who was gunned down'