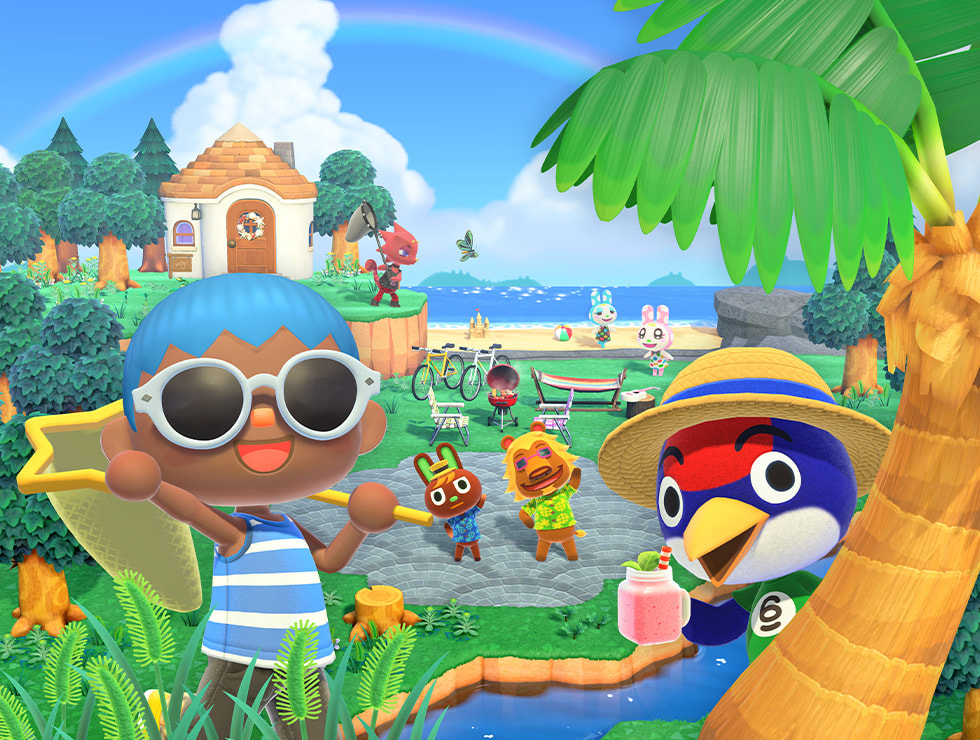 This past week has been rough, from reports of COVID-19’s rising numbers across the world, to the desperate challenges confronted by those on the front lines of this pandemic. But in between the doom and gloom, something odd was happening online. On March 20, the top Twitter trends suddenly went wall-to-wall fruit: oranges, cherries, apples, pears. Since then, images of animated island life and grumbles about owing one’s mortgage to a raccoon have proliferated in various corners of social media. All of these are due to the arrival of Nintendo’s latest release for the Switch console, “Animal Crossing: New Horizons.” The game has taken a homebound nation by storm, thanks to an accidentally perfectly timed arrival and a soothing all-ages scenario.

The game has taken a homebound nation by storm, thanks to an accidentally perfectly timed arrival and a soothing all-ages scenario.

The original “Animal Crossing” was created back in 2001 and arrived in America for GameCube the next year in September of 2002. Nintendo billed it as a “communication game,” though most would today categorize it as a social simulation game. “Animal Crossing: New Horizons” is the fifth iteration of the series, but all feature the same nonlinear, nondemanding sort of play. The user creates a customizable character who chooses to move to a new land, in the case of “New Horizons,” a deserted island. Said deserted island is set to your time zone and area, so that the date, time and seasons match the present day. (Sometimes the weather even lines up, too.) Technically, there are no defined objectives. The player can do whatever they like, from lying on the beach to catching fish to picking fruit. As one runs around collecting resources, the ability to make tools and create buildings are presented, with the game gently nudging the player to accomplish goals and create a comfortable world.

But collaboration is “Animal Crossing’s” secret weapon. In the original game, up to four players on a console could inhabit a single village and work together to build a cohesive landscape, shipping items to each other to complete missions and design a society. As broadband and Wi-Fi have become ubiquitous, this collaborative process has grown. Multiple players in one household who share a single Switch still share an island and must work together to pool resources. But now visitors from far away are also part of the gameplay. After all, life on a deserted island means not all resources are available. If one lands on an island covered in pear trees, the only way to create an orange grove or a cherry orchard is to find friends for whom this is the native fruit and organize a trip to their island and orchestrate a trade.

These noncompetitive aspects of “Animal Crossing” are one of the reasons it was not a household title prior to this year. Video games are one of the most gendered sections of the media landscape, ever since Mario found himself trying to rescue a princess who turned out to be in another castle. In those Iraq War years, coverage was far more likely to be dominated by first-person shooting games such as “Call of Duty” (2003) and “Halo 2” (2004) or violent escapism like “Grand Theft Auto: San Antonio” (2004). The few games that did star female characters, like “Tomb Raider” (2001) created women who were designed to appeal to men with exaggerated Barbie-like silhouettes. Social games that appealed to women, like “The Sims 2” (2004) were enormously popular, and yet mostly left out of the conversation — or at the very least, the definition of what a “gamer” looked like.

That’s been true of games created to appeal to women for decades. Games like “Bejeweled,” “Farmville,” “Two Dots,” and others are some of the most dominant video games played online but are dismissed as somehow “not real games” because they are not played on a console and don’t involve guns or rescuing princesses from castles. “Animal Crossing,” with its focus on designing homes, creating outfits and looks, and collaborating with your neighbors is exactly the sort of game that gets dismissed out of hand.

[Life Advice] Sometimes you can spot message bottles washed up on the beach. I’ve heard some folks say they’ve found letters and DIY recipes inside. I can’t think of a better reason to seek them out and pick them up! pic.twitter.com/exrjU90dKF

Not that the game is completely free of violence – wasp nests fall out of trees and attack you for disturbing their home, tarantulas will openly rear back and charge you if you pull out a net within their line of sight. But “Animal Crossing” is a world where there is no run on medicines that heal you, or lack of food to eat. (Though apparently one cannot cook the fish, this is a vegetarian universe.) In that, it is a safe retreat from the current reality we all face.

In this time of social distancing, it turns out that a trip to a calming island, where there are no demands on your time other than building a few houses and planting some trees in a virtual paradise is exactly what many of us need. And the arrival couldn’t have been timed more perfectly, arriving amid shelter-in-place orders in states around the U.S.

On March 21, an attempt to buy a Switch here in the Washington, D.C., area failed, with Amazon sold out and most stores claiming not to have them in stock within a 250-mile radius. Only Best Buy had any, and a manager claimed even these had sold out online within minutes. Buyer demand like that isn’t new, but it’s usually tied to hyped new releases (the Switch has been out since 2017) or frantic holiday shopping. A random weekend in March during the release of a game which encourages building a museum so a friendly owl named Blathers can teach you about fossils and bugs is practically unheard of.

Interestingly, and not in a bad way, the current “Animal Crossing” craze has taken the game to another level. People aren’t just collaborating across households or across the nation to exchange goods. They’re now playing together as a shared experience. It’s not just collaborative building or visiting each other’s islands. Now players are all experiencing the joys of expanding their houses (and owing thousands to Tom Nook the Raccoon), holding opening ceremonies for their new bridges, and growing new plants alongside each other, as they live-tweet their game play. The result is a social phenomenon we can actually feel good about.

What if there's no winner on November 4?

Woman in her 30s who died on flight in JULY was suffering from COVID-19, officials now reveal

Michelle Obama heartbreak: Ex-FLOTUS 'will never run for US President' despite major poll

Who do experts pick as greatest F1 driver between Lewis Hamilton and Michael Schumacher?