Hi everyone! We are incredibly excited to announce that our newest title is coming to Playstation 4 on 8th May! We at Awesome Games Studio have been working on Fury Unleashed for five years now, polishing it to its core, for all of you to enjoy. The rogue-lite adventure looked much different in the beginnings, and we hope that you’ll find the story of its evolution an interesting read. 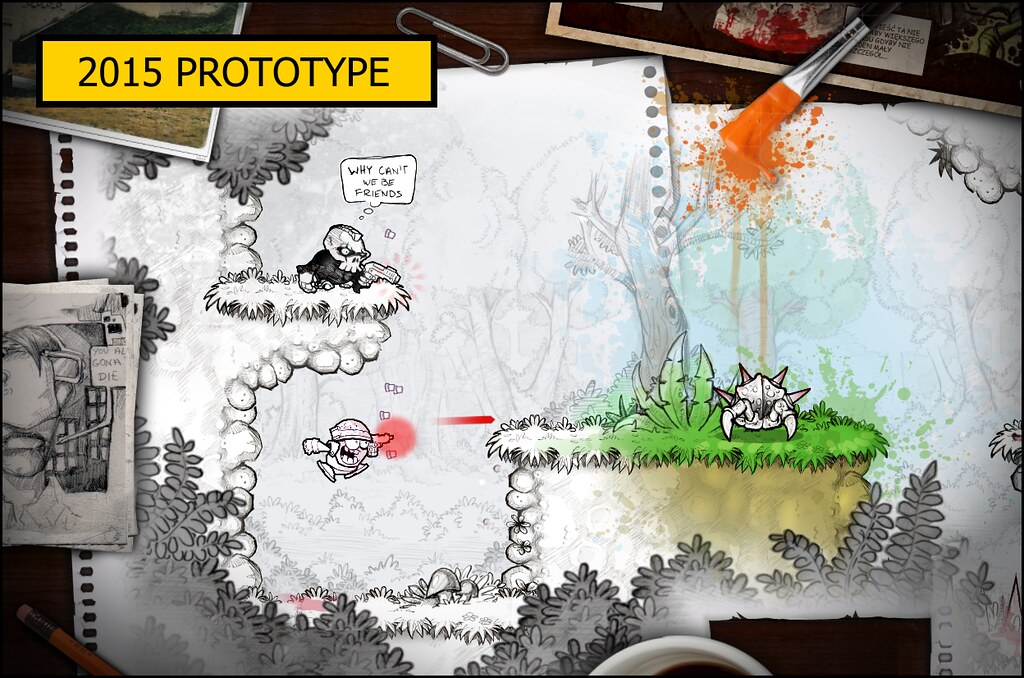 Development started in 2015. We are a small indie studio, so being close to each other, there were lots of ideas coming through on a daily basis. The base concept was born in the mind of our artist, who came up with the idea of a game taking place inside a comic book Two years later, we decided we were ready to share it with the gaming community and gather feedback on what needs improvement. Surprisingly to us, it turned out to be a lot!

First of all, we heard that the game was too difficult. But instead of just making it easier, we’ve chosen to add an entire game mode where players can adjust difficulty parameters to their liking, at the cost of disabling most trophies and leaderboards – a feature we’ve seen becoming increasingly popular in recent years.

Also, as you can see in the above gameplay, the graphic design has changed a lot since the game’s first iterations. Many players mentioned that Fury Unleashed had a “mobile” look, which gave us the impulse to gradually evolve it into something more serious, yet existing in the space of over-the-top stories. We strove to capture the atmosphere of an adventure, in which we could both fight undead ancient gods, and tell the story of a person dealing with his personal issues of burnout and self-doubt.

Even the game’s name changed in the development process. It was initially titled “Badass Hero”, but after hearing feedback like “love the game but hate the name”, we’ve made a difficult call to let it go. Sometime after the change, we started to hear jokes about misreading it as “Furry Unleashed” – so we decided to play along and add a “Furry” customization option for the main hero!

However, the most popular demand from our players was to add a co-op mode. While we’ve initially thought it wouldn’t be possible, because from the very beginning the game was designed with just single-player mode in mind, we eventually made it work, and now you can plow through multiple comic zones side-by-side with a trusted friend!

All in all, Fury Unleashed turned out to be a product of love which merges the nostalgia of old-school games with the standards of modern game design and attempts to fulfill players’ expectations wherever possible. It took us much longer to make it than we’ve initially anticipated, but we believe that going the extra mile to take advantage of feedback we’ve received was well worth it. You can download the free demo version of Fury Unleashed right now, and the full version is due to release on 8th May.

We hope for you to find as much fun playing as we had while making it!

Hasbro are planning a new version of the HeroQuest board game

The Art Of Marvel's Avengers