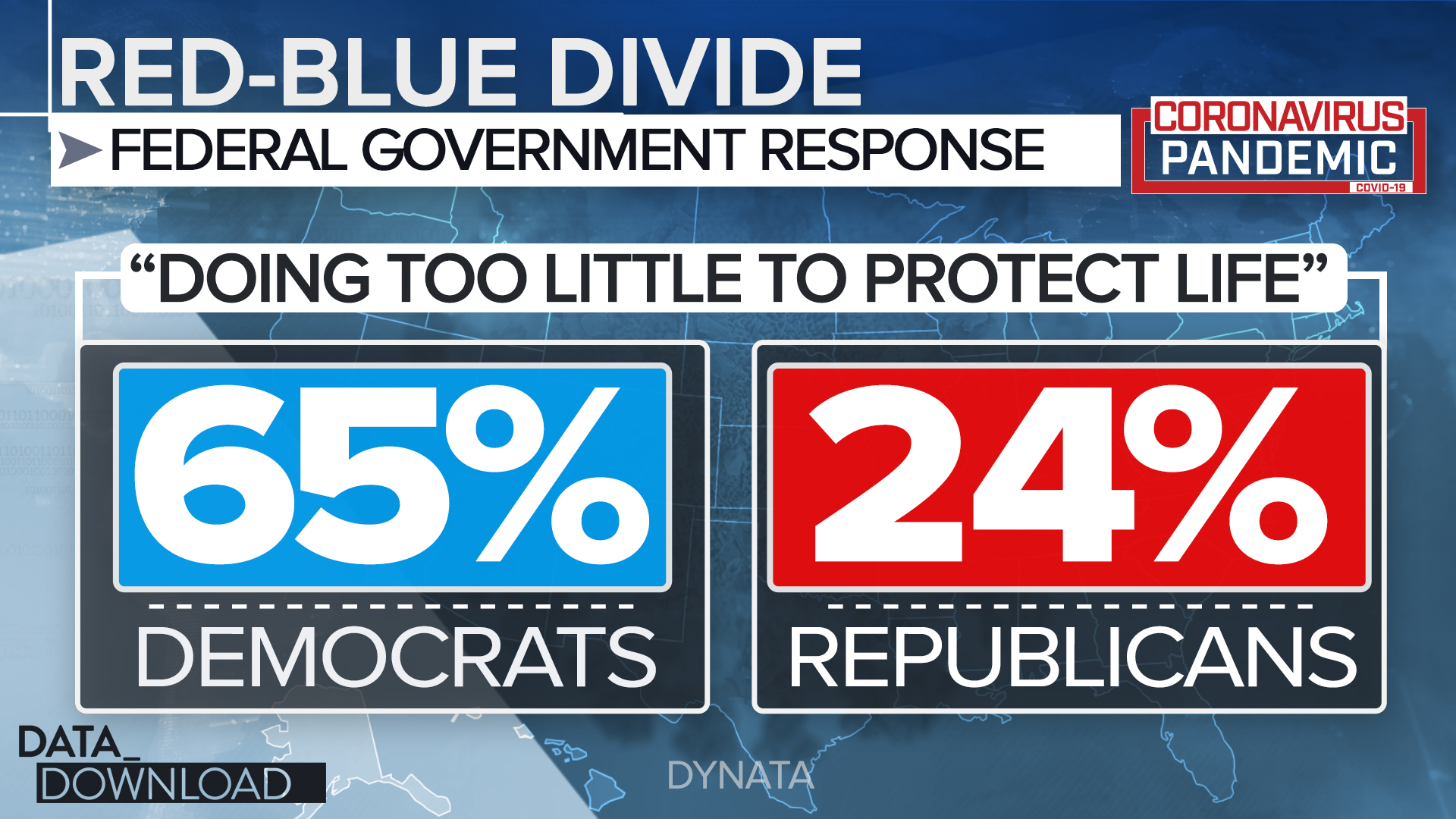 WASHINGTON — The spread of the COVID-19 virus has not occurred evenly around the country. Urban areas, such as New York City, have been harder than rural locales and that difference in impacts follows some of the deep partisan political splits in the country.

Democrats and Republicans seem to be experiencing the coronavirus differently and that may be playing a role in how they see the pandemic – at least for now.

As of Friday this week, there were more than 102,000 confirmed cases of the virus in the United States and roughly 1,700 counties had at least one confirmed case, according to data from USAFacts, which is updating maps of virus data daily. But look at those numbers through the prism of the 2016 election and they are hitting Democratic-leaning counties much harder.

Those are wide discrepancies and they go to the first-hand experience those populations have with the virus. People in those Trump counties are less likely to know someone from the community who is suffering from the virus compared to those in Clinton counties. The stories playing out in places such as New York or New Orleans are likely to feel further away to many people who live in Trump counties. And those different realities on the ground may be playing a role with how Democrats and Republicans see the virus’s impact.

Figures from an online panel survey taken this week, show members of the two parties have very different opinions on the federal government’s reaction to COVID-19. The numbers, from Dynata, the world’s largest first-party survey insights company, show Democrats are much more likely to think the federal government is doing too little in the pandemic.

There is a lot behind those splits. The Data Download has written extensively on how partisanship has come to color a wide range of topics in politics and policy. Once President Trump takes a position on an issue, Democrats and Republicans tend to march off in different directions on it. But the divide in how the virus is being felt at the local level is also likely playing a role, perhaps a large one.

However, the situation with the virus is not static and as time goes by and its spread continues, some of the differences between Clinton and Trump counties are likely to wane.

Consider what the county-level virus map looked like just two weeks ago, on March 13 when there were only about 2,200 confirmed cases of the coronavirus in about 350 counties, according to the USAFacts data.

Still, even as urban areas are hit harder, the growing spread of the virus across the map of the United States seems destined to make the pandemic more “real” across different parts of the country as people see and hear stories about friends and neighbors testing positive in local newspapers, TV and radio and on social media.

And as the virus spreads out more, hitting more counties that voted for Trump, those communities may face an additional challenge – larger shares of older people who seem to be more susceptible to serious health challenges from the virus.

In Clinton counties, less than 20 percent of the population is 60-or-older, but in Trump counties, more than 23 percent are in that age group. Factor in the lack of hospital beds and doctors in most rural communities, and there is evidence that even if the pandemic hits those counties later, it could still have huge impacts on the life and health of those places.

Up to now, the cultural self-segregation that has become a big part of American life has provided a buffer from the pandemic for some rural, more conservative political partisans. But as the COVID-19 pandemic goes on, and the disease spreads, that buffer seems likely to wear down, poking a hole in one part of the blue-red divide that defines politics in 2020.

One dead, another hospitalized in critical condition after mall shooting

Thanksgiving vandalism: 'Land back' sprayed on US statues

US tops 13 MILLION coronavirus cases and 264,000 deaths 65 Americans dying from disease every hour