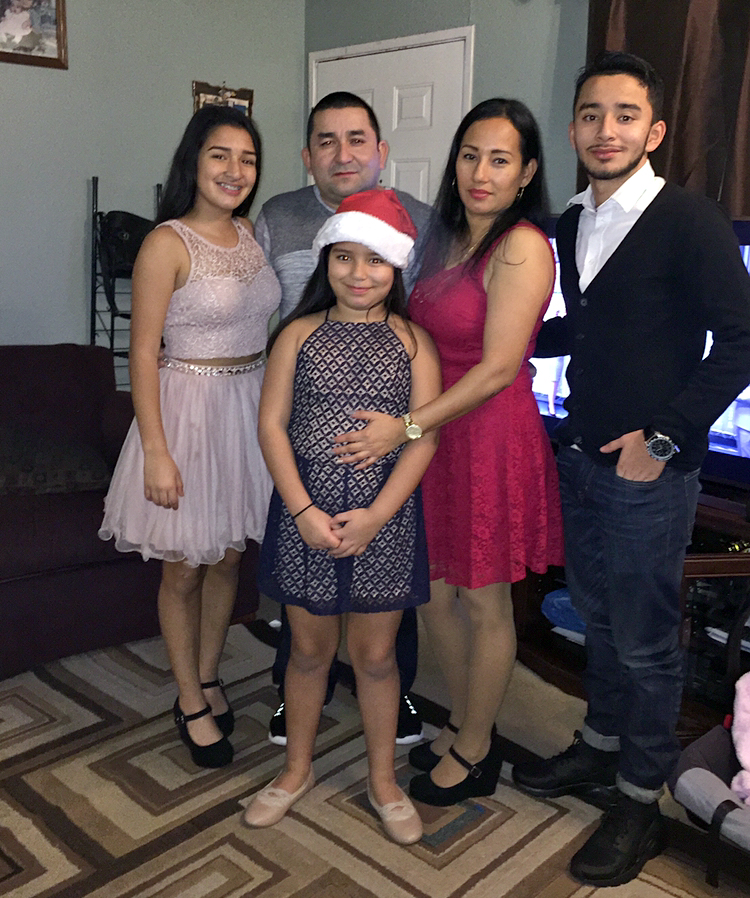 Americans with family members in immigration detention facilities, as well as their lawyers, are sounding the alarm and urging the release of nonviolent detainees with underlying health conditions amid the COVID-19 pandemic.

On March 24, Immigration and Customs Enforcement announced the first confirmed case of COVID-19 in a person held in an immigrant detention center.

In interviews with NBC News, families and attorneys expressed concerns for their clients and loved ones who are detained in ICE facilities. There are currently 37,000 people held in ICE detention facilities throughout the country.

María Vasquez, from Houston, is concerned about her father, Román Vasquez, 59, who is currently detained at the Montgomery Processing Center in Conroe, Texas –- the same facility where an employee tested positive for the virus on Monday, according to a statement from the GEO Group that operates the facility.

Román Vasquez, a green card holder, has been in the facility since February after returning from a trip to Mexico to visit family.

Vasquez’s daughter expressed her fears for her father, who suffers from chronic bronchitis and Type 2 diabetes and is currently in isolation with COVID-19-like symptoms, such as body aches, congestion, and difficulty breathing.

“I’m scared he probably has the virus and he doesn’t know and they don’t know how to treat it,” Vasquez said.

“I strongly think my client has it. He just hasn’t been tested,” added the family’s attorney, Armand Jawanmardi.

Jawanmardi has tried to get Vasquez tested for COVID-19 but said that ICE denied his request. He also reached out to have Vasquez’s case dropped, or at least have his April 14th trial date moved up. He said ICE denied these requests as well. ICE says it makes custody determinations on a case-by-case basis.

Vasquez says she hopes the recent confirmed COVID-19 cases at the facility will strengthen her father’s chances of being freed.

“I’m worried I’m going to get a phone call one day and it’s not going to be a good one,” she said.

Nearly 2,600 people in Washington have tested positive for coronavirus. The state was an early center for the virus, with a man in his 30s from Snohomish County being diagnosed as the country’s first positive case on Jan. 20.

Michele Carney, an immigration attorney in Seattle, has been fighting to get several clients released from the Tacoma Northwest Detention Center.

“They’re really scared. They just feel like they’re sitting ducks. They just think, ‘When is this going to hit?'” Carney said in a phone interview.

Migrants detained inside ICE detention facilities are housed in close proximity to one another, Carney said, so if one person contracts the coronavirus, the results could be disastrous for everyone housed and working in that facility.

In response to concerns from advocates, family members and attorneys, the ACLU of Washington and the Northwest Immigrant Rights Project sued ICE on March 16. The lawsuit sought the release of nine detainees at the Tacoma Northwest Detention Center at high risk for serious illness or death if they contract the virus.

Matt Adams, the legal director for the Northwest Immigration Rights Project, said he strongly disagreed “with ICE’s assertion that the harm is not imminent simply because the agency has not yet publicly confirmed any cases of COVID-19 at the NWDC.”

“I just hope our clients do not succumb to severe illness or death before we can procure their release,” Adams said in a statement.

ICE says it is working closely with the Department of Homeland Security and other federal, state and local agencies to keep migrants and its employees safe, according to official guidance released by the agency on its website.

The agency said that its epidemiologists have been “tracking the outbreak, regularly updating infection prevention and control protocols, and issuing guidance to ICE Health Service Corps (IHSC) staff for the screening and management of potential exposure among detainees.”

While ICE has said it has the ability to isolate and treat migrants who contract COVID-19, Carney is not confident that the agency will be able to handle an outbreak inside its facilities.

“ICE’s response and the immigration court’s response to critical issues has been slow. We’ve had to force them to make responses,” Carney explained.

One of Carney’s clients, Tulio Cantarero Lemus, 44, has been detained for two years inside the Tacoma Northwest Detention Center. NBC News’ Social Newsgathering team spoke with Cantarero Lemus’ wife, Rosalia Machado-Orellana, who described what her husband is experiencing inside the facility.

“He feels hopeless,” Machado-Orellana said through a translator. She says her husband has lost 45 pounds and has high blood pressure, which puts him at a higher risk of serious illness or death if he contracts the virus.

“I don’t believe he is protected,” Machado-Orellana said. “If he ends up catching something in there, I don’t know if he’ll survive it.”

Carney had requested for Cantarero Lemus to be released, citing these health concerns, but said that ICE has denied the request.

US election 2020: The other 1,214 candidates running for president

'The Big Burn' of 1910 transformed wildland firefighting. Will 2020 do the same?

Fauci says the White House had a superspreader event: 'The data speak for themselves'