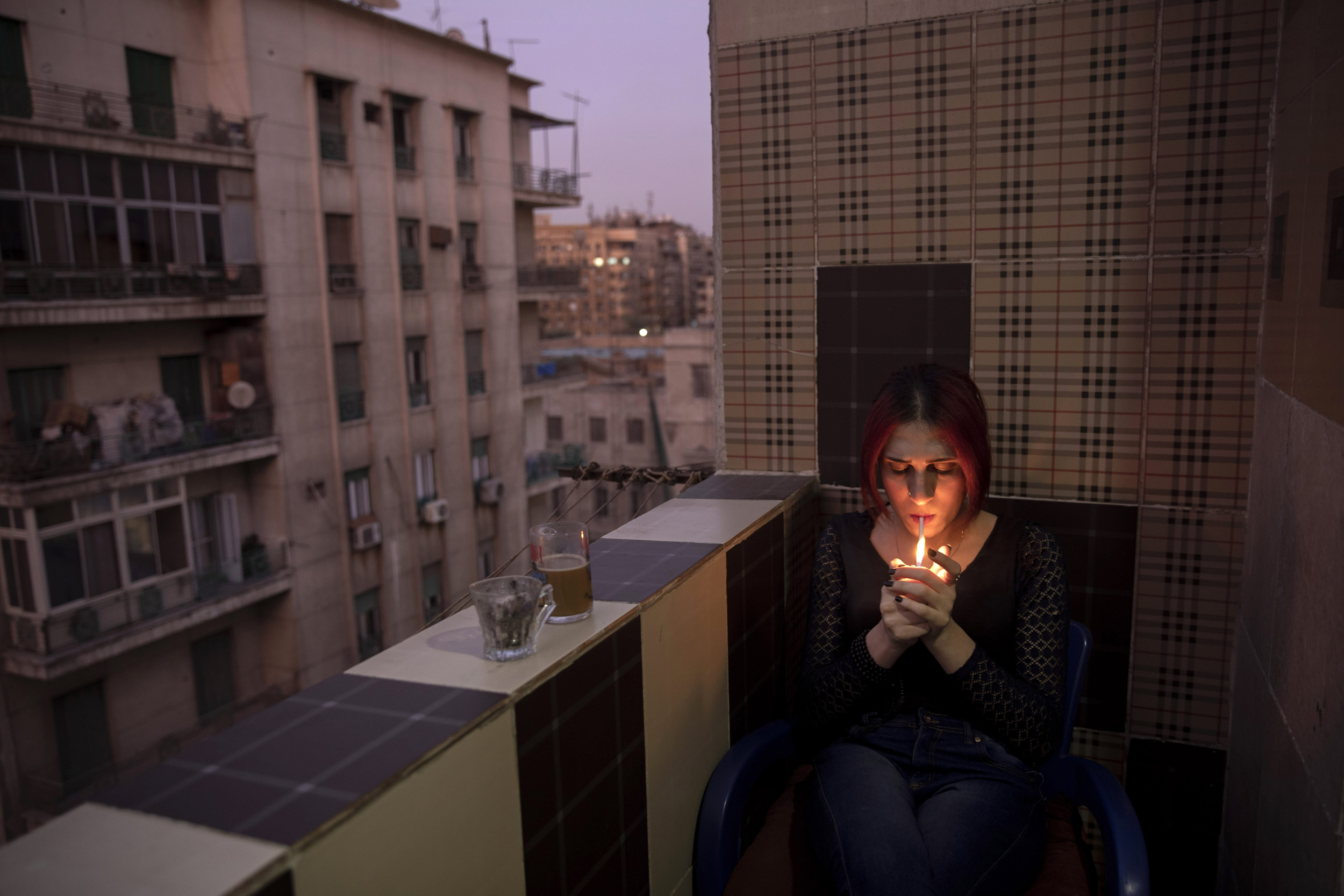 CAIRO — Malak el-Kashif left home on her birthday seven years ago. Walking into an uncertain future, she was underdressed for the weather and armed with little— except for some makeup, a few women’s accessories and 50 Egyptian pounds (at the time about six American dollars).

“I was afraid but I didn’t hesitate,” she said. “There weren’t any other solutions.”

That night, el-Kashif identified as a 13-year-old boy. She has since emerged as perhaps Egypt’s most outspoken transgender woman activist.

It’s a label that in a largely conservative and patriarchal society has meant battling a war on multiple fronts.

“When you declare you are different, you should get ready for war. A big war,” she said. “The society will stomp on you and treat you like you are the enemy.”

She has been ostracized by her family and scorned by some who accuse her of tampering with God’s creation. She has been attacked by others scandalized by her activism for LGBTQ rights. Legally, she still holds a male’s identity card.

None of this has deterred her from publicly advocating for transgender rights. She appeared on a television show in a blonde wig — which she now sees as a cringe-worthy fashion faux pas. On her Facebook page, she has campaigned for transgender people, chronicled her transition and posted photos with a rainbow background. She rails against homophobia, sexual harassment, bullying and the patriarchy.

“If I wanted to hide, then I would have hidden and just stayed at my parents’ and not become a trans [person] and saved myself all of this. … It’s just not me, not Malak,” she said. “Malak is someone else.”

Officially transitioning in Egypt can be complex. It involves medical tests, psychological treatment for two years and approvals by medical specialists and religious authorities. Success is far from assured.

Osama Abdel-Hay, head of the doctors’ syndicate’s “gender correction” committee, said a cleric used to sit on the committee alongside medical specialists. He stopped attending meetings and the committee’s work was disrupted for years, he said. “He wasn’t supportive of the decisions of the committee,” he said, refusing to elaborate.

Abdel-Hay said he didn’t recall how many approvals were given to transgender people. His assistant scribbled on a piece of paper summing up the committee’s work between 2014 and 2017: 87 approvals for “physical” reasons but zero for “gender identity disorder.” Thirty-one were left unresolved.

Now, under a new system, the medical committee sends the cases it approves to Al-Azhar’s Islamic Research Academy. Out of three cases sent to the religious scholars, two were rejected. The approved one cited a fertility disorder.

“I think they are sensitive to changing the sex because they don’t want to change the creation of God,” he said, referring to the religious establishment in Egypt. The syndicate that oversees the committee doesn’t want to clash with Al-Azhar over this issue, he said, but added, “if there was no religious opinion in the process, approvals would have been faster.”

Abdel-Hady Zarei, who heads the fatwa committee at Al-Azhar, said there cannot be one religious opinion for the cases. Instead, each must be studied by a group of religious scholars who hear from medical specialists. Decisions are made on a case-by-case basis, he said, adding the issue “is put in the hands of the medical specialists because they are the experts.”

The surgery must provide a benefit or prevent a harm, he said. There may be a consensus “one case will lead to a correction” while another “is just a tendency or desire toward the other gender.”

Nazeer Ayad, secretary-general of the Islamic Research Academy, told The Associated Press that sex “change or correction” is only allowed in “exceptional cases,” like when the sex cannot be determined as either male or female.

“It’s a medical issue,” he said. “The academy and the sharia scholars make their decision based on what the doctors say.”

El-Kashif said she never received a response to her case. She was diagnosed with “gender identity disorder,” she said. The term was replaced in the American Psychiatric Association’s diagnostic guide by “gender dysphoria” — a conflict between assigned gender at birth and the one a person identifies with, which may lead to significant distress.

An approval would have allowed her to have the surgeries at a public hospital, paving the way for changing her ID.

She argued the decision should be purely medical.

“When you get sick, do you see a doctor or a sheikh? A doctor,” she said. “When a woman is giving birth does she go to the hospital or to the mosque? The hospital.”

El-Kashif grew up in a religious, traditional household where she memorized parts of the Quran. At a home where “a man is a man and a woman is a woman,” she enjoyed more freedom as a boy than her sisters or the girls in her neighborhood.

The advantages did not matter. After playing with two girlfriends, making dresses for dolls, the then 9-year-old declared to her mother: “I am not a boy. I am a girl.” She was banished to her room. When her father arrived, he beat her, she said.

The worst part came next. She called it “my struggle with the mirror” phase. Years of asking Who am I? If I am a boy then why do I think this way? If I am a girl then why do I look the way I do?

“This was the hardest phase ever, even harder than confronting society, harder than prison,” she said. “It was a huge fight that no one could protect me from.”

Compounding her dilemma, she didn’t have the vocabulary to explain her situation. That changed when her sister said the actress in a movie she was watching was transgender. She started researching.

She experimented with makeup and set up fake identities online. On her birthday, she received an ultimatum: follow the rules or leave. “I picked the tougher option.”

Sometimes, el-Kashif slept in a park or stayed up all night. For money, she swept up hair at a salon or mopped staircases.

El-Kashif’s battles are etched on her slender body. The scars peeking underneath her top are from the time she threw herself from the fifth floor. The ones on her arm are a reminder of cutting herself with razors more times than she can count.

Then there are the invisible wounds that chronicle a life of hardship and defiance.

There’s the day she went out in a black wig and pink shoes. She said her father and brother found her and tore her clothes off her body as they took her home. There is the fear she will die alone and the feeling that when her mother looked at her, she saw not her child but a “freak.”

In a moment of reconciliation, el-Kashif posted a picture of silver socks and a pink watch on Facebook. “My mother brought these to me and said she felt she gave birth to me all over again. … I am very happy, the happiest person on earth,” she wrote. The relationship is complicated with ups and downs.

El-Kashif punctuates her recounting of painful life events with jokes and sarcastic comments. As she talks, she smokes heavily, fidgets or plays with her hair — which she had colored red and often wears a lipstick shade to match.

“She is traumatized. This is (what happens) when you topple the temple,” said Mozn Hassan, a leading feminist activist and a friend of el-Kashif’s. “These people, that Malak is one example of, experience multilayers of violence and exclusion all the time.”

Reda al-Danbouki, executive director of the Women’s Center for Guidance and Legal Awareness, said “most trans people (here) prefer to remain silent so they can retain even a small part of their rights. They don’t want a confrontation with society on top of what happens with their families.” El-Kashif “has shocked the patriarchy.”

El-Kashif’s activism extends beyond advocating for the LGBTQ community. She was arrested last year after she called for protests following a fatal train crash because of what she saw as government negligence. She was imprisoned in a men’s prison. The arrest, her third, sparked an outcry as activists and rights groups feared for her safety, especially due to her gender identity. She said she was held in solitary confinement.

Hassan said pressure mounted on authorities at the time to isolate her from male prisoners to spare her possible violence.

After her release, el-Kashif filed a lawsuit demanding special places for holding transgender people in prisons and police stations.

Now, she lives in a sparsely furnished rental. One of the drawings in her room shows bare legs, one shackled by an iron ball. A note taped to the mirror carries a grim reminder: “Quit the chemistry. Otherwise, it will do to you what it did before,” a reference to abuse of anti-depressants.

Day-to-day life can be hard. On a trip to a bank, an employee said he would have to call the police to witness any transaction because her ID showed a teenage boy.

Shortly before her birthday last year, el-Kashif posted a picture of herself online writing that she had completed her gender transition surgeries.

“Today is the day I defeated society,” she wrote. “From this day on, there’s only Malak.”

She was flooded with thousands of messages. Some congratulated her; many insulted her.

The comments ranged from “pray to God to heal you” or “you have lost in this life and the afterlife” to “If you were my son, I would have set you on fire.”

But other encounters have left her feeling like she’s making a difference.

One mother approached her at a hospital and said she sought medical help for her daughter after hearing el-Kashif’s story. Another time, a transgender man stopped her to let her know that “To me, you are resistance.”

Kamala Harris speech: What was the verdict on how she did?

China POLL: Should UK pull out of the 2022 Beijing Winter Olympics in protest? VOTE HERE

Highlights from third night of 2020 DNC

Sumner Redstone, who a built media empire from his family's drive-in theater chain, dies at 97