WASHINGTON (Reuters) – As the coronavirus threatens to push the global economy into recession, the Trump administration is rolling out an unusual idea: handing out free money.

President Donald Trump and Treasury Secretary Steven Mnuchin on Tuesday proposed mailing out checks of up to $1,000 to American adults to quickly pump hundreds of billions of dollars into the U.S. economy at a time when airlines are slashing flights and officials are shuttering restaurants, sports arenas and other public venues.

Though details remained unclear, Washington could turn to the playbook it deployed in February 2008, when the Great Recession was just taking hold. The Economic Stimulus Act of 2008 provided payments averaging $600 per person, injecting more than $100 billion into the economy within a matter of months.

The payments were directly deposited into bank accounts by the U.S. Internal Revenue Service (IRS) to taxpayers who filed their taxes electronically, or came as paper checks to other taxpayers. Individuals who didn’t make enough to pay federal taxes still had to file an IRS statement that year to get a payment.

Economists concluded that it was one of the most effective measures deployed to blunt the impact of the worst downturn since the 1930s.

Any such program would need Congressional approval. Support in both the Republican and Democratic parties has been building.

“We simply need to use existing systems to get cash in the hands of workers and their families as quickly as possible,” Republican Senator Tom Cotton said on the Senate floor on Monday, as the chamber returned to town to consider an economic-aid package that was overwhelmingly passed by the House of Representatives on Saturday. Cotton has in the past criticized benefit programs and voted against disaster relief bills.

Advocates say it would have a more immediate effect than other proposals, such as a payroll tax cut, because the government could get money into peoples’ hands within a matter of months and those dollars would quickly circulate back into the economy.

“I think you should just give people money. They will spend more of it,” said Claudia Sahm, director of macroeconomic policy at the Washington Center for Equitable Growth.

Some economists say most U.S. households have little, if any savings, and the money could be used to cover rent or other bills if they lose work, or go toward necessities such as groceries, circulating back into the economy.

It might be too soon to consider direct payments, as it is not yet clear how the coronavirus will affect the economy, some economists say. While airlines and restaurants are likely to be hard hit, Amazon.com Inc (AMZN.O) announced on Monday that it plans to hire 100,000 workers to deal with a surge of home delivery orders, and it could take months for the Federal Reserve’s aggressive monetary response to have an impact.

Efforts to slow the spread of the coronavirus through “social distancing” could also suffer if the payments encourage people to go out, said Paul Winfree, an economist at the conservative Heritage Foundation.

“I don’t know that public health officials should recommend that we all go to the mall and the movies to be spending that check,” he said.

Like other stimulus efforts, free money would not come cheap.

In 2008, the IRS mailed out more than 132 million payments between May and July to households that had filed tax returns for the previous year.

That cost the U.S. government $106 billion in lost tax revenue and increased payments, according to the Congressional Budget Office.

But economists also found the tax refunds were among the most effective measures that Washington deployed to blunt the recession. Moody’s Analytics estimated that each dollar spent resulted in $1.55 to $1.71 in economic activity.

If Congress approves the $1,000 checks that Trump suggested, that would lead to a much bigger price tag at a time when Washington is already running up near-record budget deficits.

But even that may not be enough. Jay Shambaugh, an economist with the Brookings Institution’s Hamilton Project, said lawmakers should also quickly increase food-stamp payments to low income recipients and enact a payroll tax cut for businesses to minimize layoffs.

“I think it’s a good idea, but it can’t be the only solution,” he said. “We’ve got to get income to everybody.”

The Oscars will reportedly not require proof of Covid-19 vaccination in order attend the in-person ceremony in Hollywood on 27 March. Instead, […] 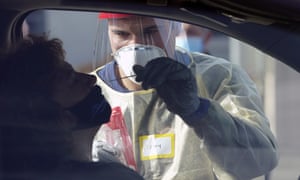 As a boy, Robert Weber chased the blazing lights and roaring sirens of fire engines down the streets of Brooklyn, New York. […]