(Bloomberg) — Governments in Australia, Japan, South Korea and the U.K. prepared emergency measures or economic packages to fight the spread of the coronavirus. Drugmakers said they hope to have antiviral treatments ready within months and vaccines by next year.

Indonesia said it’s working on a second stimulus as the health threat grows, while South Korean President Moon Jae-in said his nation is at war with the virus. In the U.S., authorities increased checks on inbound travelers as four more patients died in Washington state and infections emerged in other states.

The OECD warned that global economic growth will sink to levels not seen in more than a decade, and the European Union set up a special team to deal with the outbreak as cases rose from Italy to Spain. Earlier, central banks pledged to respond to the rout in markets.

Click VRUS on the terminal for news and data on the coronavirus and here for maps and charts. For analysis of the impact from Bloomberg Economics, click here.

Indonesia is working on a second stimulus package, adding to the central bank’s aggressive moves to counter the impact of the coronavirus on markets.

A new tranche of fiscal measures would be bigger than the first one of 10.3 trillion rupiah ($725 million) announced last week, Coordinating Minister for the Economy Airlangga Hartarto said in an interview Monday.

South Korea is “at war” with the novel coronavirus, said President Moon Jae-in as infections mount, according to a pool report from a cabinet meeting.

Moon asked all agencies to operate a 24-hour emergency system to monitor the situation, and the government will directly and indirectly input more than 30 trillion won to fight the outbreak and minimize its impact on the economy.

The government will arrange four charter flights to pick up 533 Hong Kong residents stranded in Hubei province on Wednesday and Thursday, Chief Executive Carrie Lam said at a weekly briefing.

Pregnant women, people who require treatment for existing illnesses and university entrance-exam takers are among those in the first batch.

Australia’s Treasury is working with other agencies to address the boost “that we believe will be necessary,” Prime Minister Scott Morrison said.

Total cases rose to 4,812 from 4,335 at 4 p.m. Monday, South Korea’s Centers for Disease Control said. The death toll climbed to 28. Of all the country’s infections, 3,600 are from Daegu and 685 from neighboring North Gyeongsang Province.

Abe last week abandoned his relatively mild approach to the epidemic with a shock announcement urging schools to shut nationwide from Monday.

Twitter Inc. said it’s “strongly encouraging” all its nearly 5,000 global employees to work from home because of virus concerns, marking an escalation among U.S. companies. The San Francisco-based social media giant has already made working from home mandatory for Hong Kong, Japan and South Korea staff.

Facebook Inc. followed Twitter in pulling out of this month’s South by Southwest conference in Austin, Texas. And Adobe Inc. canceled its Adobe Summit 2020 planned for Las Vegas, saying it instead will hold it online.

Oregon officials reported what’s probably the state’s third coronavirus case — and the second transmitted through the community. The adult patient — a resident of Umatilla County in rural, eastern Oregon — had not traveled recently to any virus hotspots, officials said.

The individual did, however, attend a basketball game at a local middle school on Saturday, prompting the school district to shut the gym Monday and conduct a deep cleaning. Oregon officials are treating the case as a “presumptive positive.” The state is awaiting test results on five other potential cases, according to an Oregon Health Authority website.

China’s death toll from the virus climbed by 31 on March 2 to 2,943, China’s National Health Commission said. All the latest fatalities were in Hubei province, the epicenter of the outbreak. The province had 114 additional confirmed cases on March 2. As a whole, China reported 125 additional infections, bringing total cases to 80,151.

South Korea has begun screening all passengers bound for the U.S. from any of their airports for infection, and Italy will implement similar screening within 12 hours, U.S. Vice President Mike Pence said at the White House.

The process will entail “multiple temperature checks in the airports for people before they are boarding,” Pence said at a briefing for reporters with federal health officials. The U.S. has already restricted travel from China and Iran to prevent infected people from entering the country.

President Donald Trump asked drugmakers what his administration can do to speed up the development of drugs or vaccines to treat the new coronavirus.

“We are going to be very successful,” Trump said at a White House meeting with Gilead Sciences Inc., Pfizer Inc., Moderna Inc. and other pharmaceutical and biotechnology firms. “A lot of exciting things are happening, and they’re happening very rapidly.”

Trump didn’t go into specifics on what measures the government might take to help them.

The manufacturers said they hope to have antiviral treatments ready within months and vaccines by next year. Gilead Chairman and Chief Executive Officer Daniel O’Day told Trump his company may test a promising antiviral in Washington state.

Four more people have died from the coronavirus in Washington State, and local officials said they’re preparing to isolate large numbers of patients for what they anticipate could be a significant outbreak.

The deaths have been centered around a nursing home near Seattle in Kirkland, where there are a large number of suspected patients. In total, there are at least 18 cases in the state, with at least 14 in King County and four in Snohomish County.

Local authorities said they’re preparing for a wider outbreak and plan to purchase a hotel and set up modular units to house and isolate patients.

“We have moved to a new stage in the fight to contain, mitigate and manage this outbreak,” said King County Executive Dow Constantine.

The Trump administration is discussing a series of steps to contain the economic and market fallout from the rapidly spreading coronavirus, including a push for the Federal Reserve to enact an emergency rate cut and a possible tax cut.

The director of the National Economic Council, Larry Kudlow, and Treasury Secretary Steven Mnuchin both favor the Fed cutting interest rates before its next scheduled meeting on March 17 and 18, according to people familiar with the matter. Within the White House, a rate cut is currently the most actively discussed economic measure to combat the virus, the people said.

Intel Corp., the world’s biggest chipmaker, postponed a science fair that was was scheduled to be held in San Francisco on March 12. Nvidia Corp. said it’s turned its GPU Technology Conference into a digital event. The company’s annual San Jose, California-based event is attended by thousands each year. The three-day conference, which focuses on graphics technology, begins on March 23.

National Institutes of Health infectious-disease expert Anthony Fauci told NBC News that the coronavirus outbreak has “now reached outbreak proportions and likely pandemic proportions,” a reporter at the network said in a tweet.

In the interview, Fauci said the U.S. may have to consider social mitigation acts, such as temporarily closing schools and events with large crowds in confined spaces. “We’re not ready for it right now, but we need to be at least thinking about the possibility,” Fauci said, according to the reporter.

A World Health Organization team arrived in Iran Monday with sufficient kits to test 100,000 people for the coronavirus and protective garments for 15,000 health-care workers.

Iran, the hub of the outbreak in the Middle East, said Monday that the number of confirmed cases surged by 523 to 1,501. So far 66 people there have died from the infection, the health ministry said.

Tedros Adhamon Ghebreyesus, the head of the WHO, urged countries not to give up on containment as a strategy, saying it will help buy time to develop a vaccine and prepare health systems.

“It’s not influenza, and it’s not behaving like influenza,” said Michael Ryan, the director of the WHO’s Health Emergencies Program, at the WHO’s daily briefing. He said the death rate is 2% or possibly higher. That would be at least 20 times more than for seasonal flu, which typically has a death rate of about 0.1%.

President Donald Trump is scheduled to attend a global health event on March 9 in Orlando, Florida, according to a U.S. official, as his administration seeks to demonstrate it’s doing a good job responding to the coronavirus.

The conference, called HIMSS20 Global Health Conference & Exhibition, brings together about 45,000 health-information technology professionals, clinicians and others, according to its website.

U.S. Vice President Mike Pence is set to meet with airline chief executive officers on Wednesday and cruise line CEOs on Saturday, according to a Trump administration official, as stocks of those companies fall as a result of concern over the coronavirus.

Pence also is set to meet with executives of 3M Co. on Thursday. The company will need to ramp up production of a type of medical mask that the Trump administration said is needed if a significant outbreak occurs in the U.S.

Russia reported its first case in Moscow. The patient is a Moscow resident who had traveled to Italy, according to the government’s special anti-virus headquarters. Two other cases were reported last month in Chinese nationals in Siberia, while another three Russians with coronavirus were brought back to the city of Kazan from the Diamond Princess cruise ship in Japan.

The S&P 500 advanced Monday after suffering the worst week for the benchmark since 2008. Technology shares led gains as central banks from Japan to England joined the Federal Reserve in promising action as warranted.

Britain reported four more cases, bringing the total in the country to 40. All four patients had recently traveled from Italy and are from Hertfordshire, Devon and Kent in England.

Earlier, Prime Minister Boris Johnson said the coronavirus is a problem “likely to become more significant for the country” in the next days and weeks. He spoke after chairing an emergency meeting of top officials Monday. An action plan to fight the virus will be published on Tuesday.

Johnson spokesman James Slack warned that members of the public face changes to their daily lives, though he urged people not to stockpile food. The government stands ready to use “all levers” at its disposal to make sure Britain is prepared, Slack said.

The impact of Covid-19 on the global economy will “likely be substantial,” World Trade Organization Director-General Roberto Azevedo told a meeting of trade delegates in Geneva Monday.

The effects will start to show up in the trade data in the coming weeks, he said. The WTO’s June ministerial meeting in Kazakhstan is “proceeding as planned. Should the situation so demand we will take any necessary action.”

An employee at BMW AG has tested positive for coronavirus, prompting the company to quarantine about 150 workers at its research and development center in Munich, according to a spokesperson.

The employee hadn’t traveled and is under medical supervision, the spokesperson said. Work at the center continues uninterrupted, though the 150 employees who had been in contact with the infected person will stay at home for two weeks.

“The coronavirus added a new layer of uncertainty to global and euro-area growth prospects,” ECB Vice President Luis de Guindos said in London. The outbreak has the potential to affect the euro area economy through both demand and supply, he said. “We remain vigilant and will closely monitor all incoming data.”

The US President’s threat to “totally destroy” North Korea is being exploited by Kim Jong-un for his own propaganda and military mobilisation.  […] 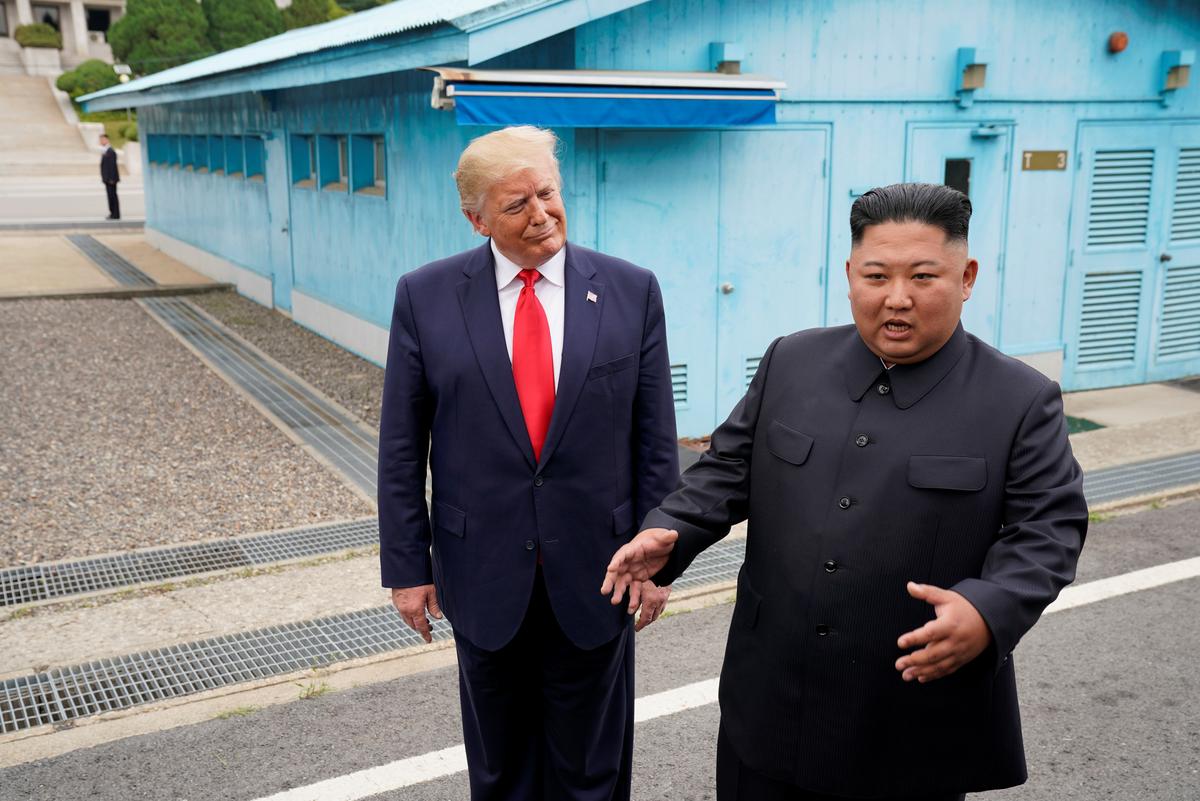 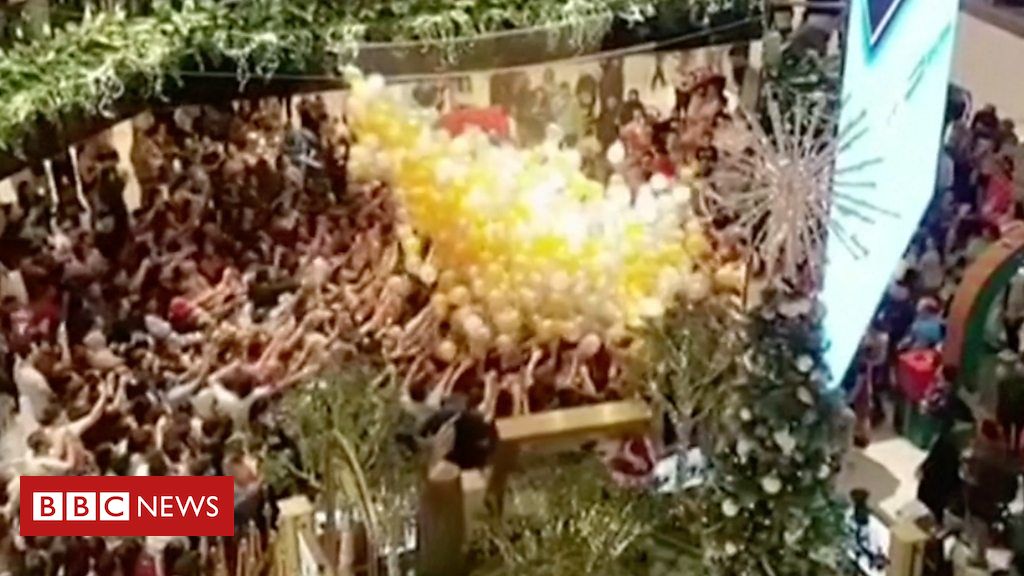 A balloon drop at Westfield Parramatta mall in Sydney went awry, when several people were injured in the chaos. Hundreds of shoppers […]