(Reuters Health) – About half of the recommendations suggested by the World Health Organization to reduce chronic disease are put into practice, according to a new study.

Implementation is slowly improving, yet alcohol and tobacco policies are the least widely practiced, researchers report in The Lancet Global Health.

“It’s a matter of holding countries accountable for their international commitments and speaking truth to power when they fail to take action,” said Dr. Luke Allen of the University of Oxford in the United Kingdom, who led the research.

Non-communicable diseases, like cancer and heart disease, account for 73% of deaths globally, the researchers note. In 2015, 193 countries committed to reducing these deaths by one third, by 2030, through 18 policies to improve healthcare provision as well as public health through nutrition, physical activity, tobacco use and alcohol use.

“We need to understand which policies are being systematically overlooked and which particular groups of countries may require additional support so that we can help to protect people from these conditions,” Allen told Reuters Health by email.

The researchers analyzed WHO progress monitor reports from 2015 and 2017 to calculate implementation scores for 151 countries for the 18 policies.

In 2017, the average policy implementation score was 49%. Costa Rica and Iran had top scores for implementing 86% of the recommendations. Scores were lowest in Haiti and South Sudan, with 5.5% of the policies implemented. Overall, scores rose in 109 countries between 2015 and 2017 and dropped in 32 countries.

In general, implementation increased for all 18 policies except for mass-media campaigns around physical activity and bans on alcohol advertising. The most commonly implemented policies were graphic warnings on tobacco packaging, disease risk-factor surveys and national clinical guidelines. Least-implemented policies included tobacco taxation, anti-tobacco mass-media campaigns and provision of cardiovascular therapies.

Scores tended to be highest in wealthy countries that invest in healthcare and education, the authors note. Countries in Europe and central Asia, for instance, landed in the top 20 more often. Their weaknesses often involved market-related changes, such as failure to reduce marketing around tobacco and alcohol.

Among the bottom 20 countries, 17 were in sub-Saharan Africa, and none of the bottom countries scored points for interventions around fats, child food marketing or heart therapies. This highlights an area where financial and technical support could be provided, the study authors write.

Allen said a large number of low-income countries and former Soviet Union states landed at the top of the list.

“You wouldn’t naturally think of Iran, Costa Rica, Moldova and Estonia as offering the highest standards of health policies to their populations, but it goes to show that it isn’t actually that expensive – just a matter of political will – to prioritize health,” he said. “All 151 countries have repeatedly committed and publicly endorsed the full list of policy options, yet no country has actually implemented all of them.”

Future studies should look at the effects of the policies that are implemented, said Robert Beaglehole of the University of Auckland, New Zealand, who wasn’t involved in the analysis.

“Of course, ‘implementation’ is self-described and says nothing about impact at the population level,” he noted in an email.

Health officials could help countries with lower scores identify and focus on a smaller number of priority policies, he added.

“Perhaps countries are being asked to do too many things at once,” Beaglehole said. “Countries might be better off if they focused on three or four high priorities with the greatest chance of actually improving population health.” 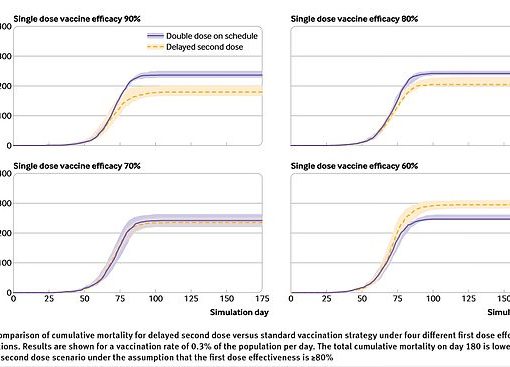 The decision to delay second Covid vaccine doses in the UK saved thousands of lives, more research has found. A study published […]

Hill Ferguson thinks telemedicine can become a routine option for patients, not just an easy way to handle middle of the night […]