REM’s ninth album, Monster, is the most challenging and polarising record the band ever released.

When it arrived in 1994, the band were at the peak of their popularity, thanks to the acoustic beauty and delicate humanity of their preceding two records: Out of Time and Automatic for the People.

But the group were restless. “We wanted to get away from who we were,” said guitarist Peter Buck. And so they torpedoed their old sound with an armoury of guitars and effects pedals; making one of the strangest mainstream rock albums of the 1990s.

Enveloped in a murky sludge of distortion, Monster found singer Michael Stipe writing about characters who were menacing, obsessive and desperate. “I need a chance, a second chance, a third chance, a fourth chance,” he sang on Strange Currencies, hopelessly trying to convince someone they were in love with him.

Recording sessions were overshadowed by inter-band bickering that left the frontman feeling withdrawn and distant, while the deaths of his friends River Phoenix and Kurt Cobain inevitably cast a pall over the music.

But if REM’s new-found abrasiveness surprised fans who’d discovered them through the manicured melodies of Losing My Religion and Everybody Hurts, it didn’t discourage them – initially, at least.

Monster debuted at number one in both the UK and the US, selling more than six million copies. But it quickly became a staple of charity shops and bargain bins, with one writer recounting his seven-year struggle to offload an unwanted copy of the album.

In recent years, though, the album has enjoyed a critical renaissance; and producer Scott Litt has gone back to the original master tapes to produce new mixes of the record, choosing new vocal takes and sweeping away (some of) the clutter, to shine a new light on the band’s most misunderstood masterpiece.

With a deluxe edition of the album about to hit the shelves, Michael Stipe and bassist Mike Mills sat down with the BBC to recall the making of (a) Monster.

Peter Buck said you wanted to be a “different band” on Monster. Why was that?

Mike Mills: The primary impetus was the tour. We knew we were going to tour for the first time in five years and we wanted to make a record that would be fun and relatively easy to play live. We just wanted to make a lot of noise.

When you look back on it 25 years later, did the album achieve your goals?

Michael Stipe: I like it. You know, I’d make a few changes. There’s about two songs that I think are too long, but it’s a pretty audacious attempt at reinventing who we were at the time and doing something that was loud and brash and punk rock. I’m happy with it.

The demos on the deluxe edition are cleaner and more direct than the final mixes. When did you decide to scuzz things up?

Was that a hard choice to make? I bet the record company wanted you to release those songs.

Mike Mills: Well, even more than that, you hate to let a good song go… And I knew they were good songs. On the other hand, using those songs would have thwarted our own purpose, so we dropped them.

Michael Stipe: We did not want to become the dancing monkey. That was not at all our agenda. We didn’t want fame, we didn’t want money, we wanted to be a vital creative band, and that informed all the choices.

How did the new sound influence the lyrics?

At the same time I was taking a lot from U2 and Nirvana, to tell you the truth. They were looking at rock music and the idea of rock music. Rather than being in the middle of it, they were taking a step back and looking at it from a different place. We all felt like that was a good place for REM to go.

Which lyrics are you still proud of today?

Michael Stipe: Most of them. I never talk about the songs I don’t like because it might be someone’s wedding song. But King of Comedy, I could have put a bit more back into that one and made it stronger.

Michael Stipe: I hope not [laughs].

You wrote from the perspective of a woman on Tongue. What was that like?

Michael Stipe: I was really stretching myself. I had not written from that vantage point before, and it was not easy at all. And it was a very sad character, who found herself in a very trapped, sad position.

That line, “Here I am, your last ditch lay,” is particularly brutal.

Michael Stipe: It’s rough. And yet, I think all of us probably recognise that place or have been there.

A lot of the songs were finished at the last minute. Was that a tense time?

Michael Stipe: It’s always like that. The guys always presented me with a lot more material than I could ever possibly write to. Lyrics are really hard. Singing is easy, melody is not a problem for Mike and I both. But to write the lyrics and to come up with an overarching narrative is a lot of work. I didn’t want to slack on it.

When Monster came out in 1994, Newsweek magazine asked what it would take for REM to break up, and Mike said “another album“.

Mike Mills: Did I say that?! Well, some records are easier to make than others.

Making an album is great fun and it’s thrilling and it’s exciting and gratifying but it’s a tremendous amount of work and, within a band, not everyone has the same vision. Plus you’re trying to do something very difficult, which is to be better than you were. All of that is just draining and we had a couple of things happen during the making of this record that made it very difficult for people.

You can’t be a blithe spirit any more while you’re making a record and dealing with the mortality of your friends. So there were a lot of stumbles along the way but, you know, we utilised those feelings and made them part of the record.

Let Me In, which you’ve called a eulogy for Kurt Cobain, is the most obvious example. On the album, the guitar is furious and cathartic but over the years, in concert, the song became quieter and more contemplative. Was that reflective of your grieving process?

Michael Stipe: Absolutely. That was a devastating, catastrophic time for everyone. But the song and the way it’s recorded, responds exactly to the moment and what it felt like to have someone that close to us take his own life. It was horrible.

Before he died, you’d been planning to make music together, is that right?

Michael Stipe: Well, yes and no. I put a project in front of him to try to pull him out of the hell he was in. I knew that he admired me and REM a lot and I came up with an idea for a project. I wrote him a letter, I sent him a plane ticket, I sent a car to his house to pick him up to bring him to the airport. We did everything we could to try to pull him out of the mental state that he was in, but that level of anguish was untouchable.

Scott Litt said he wanted to remix Monster because the energy of the album got “buried because of the way it was layered”. Do you agree?

Mike Mills: I think, looking back at it, his point is valid. I don’t know that it would have been a better record had we not done it that way. It would have been very different. I like most of his remixes, not all of them, but that’s not the point. They weren’t there to make me happy.

Michael Stipe: We we were doing what music and art does best: We were responding to the times. The production of that record is exactly who we were at that moment in time. I’m glad that Scott made the remixes. It’s fascinating to me to hear the songs that raw but I don’t think it would have served REM well at the time.

Your voice is much more prominent in the new versions.

Michael Stipe: It’s a lot louder and there’s a lot less reverb, but I’m fine with that. I like my voice very much.

The second disc of the deluxe edition is mostly instrumental tracks that were demos for Monster but not used. Have you ever considered that somebody might come along and use those as the basis for new songs?

Mike Mills: They’re certainly welcome to because we’d get a writing credit. But if they do, make sure it’s a hit!

After releasing Monster, you toured for the first time since 1989. What was it like to meet the new audiences you’d gathered over the last five years?

Michael Stipe: It was thrilling. I mean, we were at the top of our game and and it was fun to have trashy, glammy, silly kind of presentation to go out with. Mike had the nudie suits for the first time and I think that was the first record where I was bald. So we were a very different animal.

I know a new REM tour isn’t on the cards, but you’ve got solo material coming out. Will you play that live?

Michael Stipe: No. Not at all. Not interested. Thank you for asking.

Don’t you miss it?

Michael Stipe: Of course I do. But I’m a different person now and it’s just not something I’m interested in.

The proceeds from your single, Your Capricious Soul, are going to Extinction Rebellion. Have you seen the protests in London?

Michael Stipe: Yes, actually. I took a walk through Trafalgar Square last night and it was absolutely thrilling, the energy and the excitement. The optimism that I felt there is unparalleled.

The 25th Anniversary box set of Monster is released on Friday, 1 November. 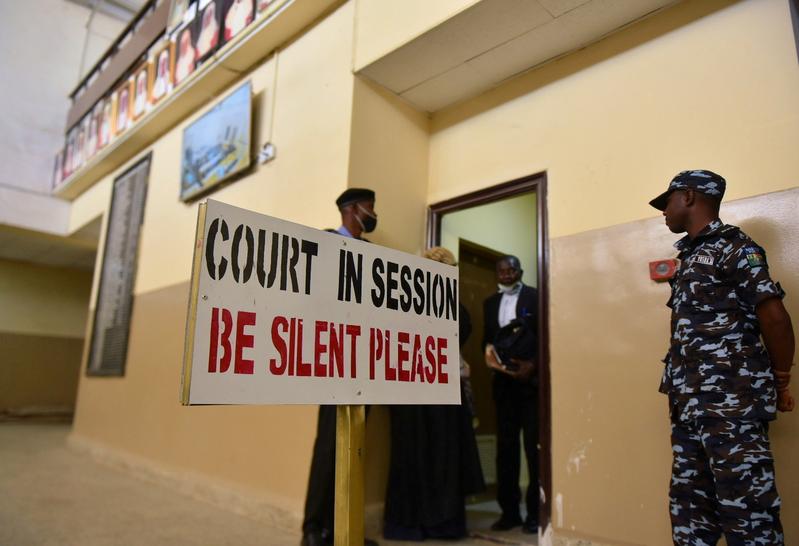 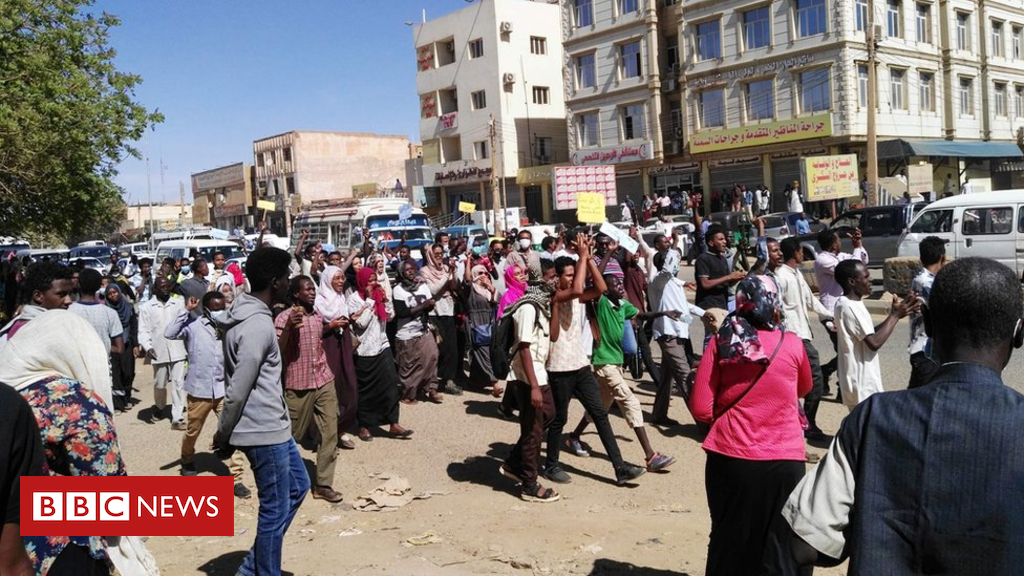 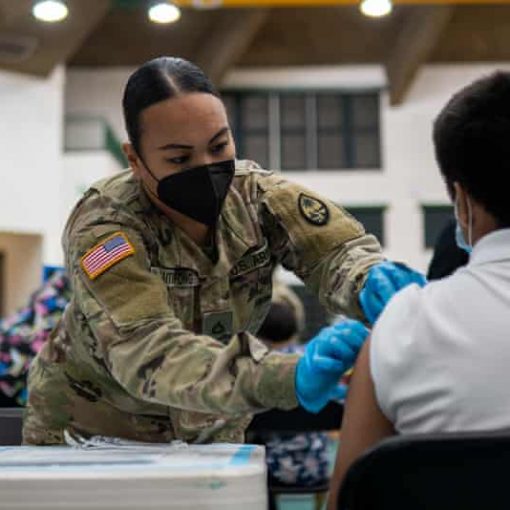 Outside Guam Memorial hospital, blue medical tents have sprung up to accomodate an overflow of Covid patients. The sight is bewildering for […]