Hi everybody, I’m Louis Denizet, programmer and designer at Hibernian Workshop and I’m here to tell you a little bit more about the bosses of Dark Devotion. It’s quite a big piece of the game as we made 17 of them and they really are the climax of tension and satisfaction of Dark Devotion.

The game development has been quite long and it’s amazing to see it coming out on PS4 tomorrow! We started working on it, Alexandre Magnat (Art Director) and I, during our spare time long before our Kickstarter campaign (2017).

At that time, we got help from Baptiste Miny, a concept artist who worked on the visuals of the game, as well as its beautiful key arts that you may have stumbled upon. He really helped us see and understand what we wanted for the game and its bosses, and their designs have evolved a lot during the development process.

The first boss we created is actually the first one you’ll encounter: Hezek. Take a look at the concept art of the guy: This one hasn’t evolved a lot as we had a clear idea of what we wanted from the start. We decided to have him tied up to the wall so that the players don’t get too scared (remember, it’s the first one you’ll meet) and get a grasp of his patterns, which are the same before and after he rips his arm off. We designed him voluntarily slow so that you can dodge his attacks easily and understand the use of this mechanic during boss fights.

You will encounter other bosses in the first level (remember, there are 17 of them), and here are some initial concepts of Jezebel (left) and Martyr (right):

Jezebel is a bit crazier, more dangerous and less classic than Hezek as we kept the idea of the lanterns as a core piece of her design and patterns. It’s interesting to point out that it’s really her concept art that defined her gameplay.

The Martyr has been completely redesigned compared to that first concept art, but we’ll let you discover that in game.

To finish up with that first level, let’s talk a little bit about The Executioner, its final boss. Here are some of his concepts: At first, The Executioner was supposed to have a whip and hook, but we decided to step out of that cliché and we went for a close-range weapon attached to his arm in order to make him more threatening:

Alexandre suggested giving him a fur coat, and we used that for his phase 2: he removes it and becomes much faster, as if he was being slow on purpose in order to enjoy his fights a bit longer. Rings a bell? Yep, we got the idea from shonen manga like Bleach with Captain Kenpachi or Dragon Ball with Son Goku and his weighted garment.

The Executioner is harder to beat than Hezek and tests your toughness and will to fight.

The examples above haven’t changed a lot between their first concepts and the final game, but some of the bosses had some radical makeovers, just like the “Life-Thief”: 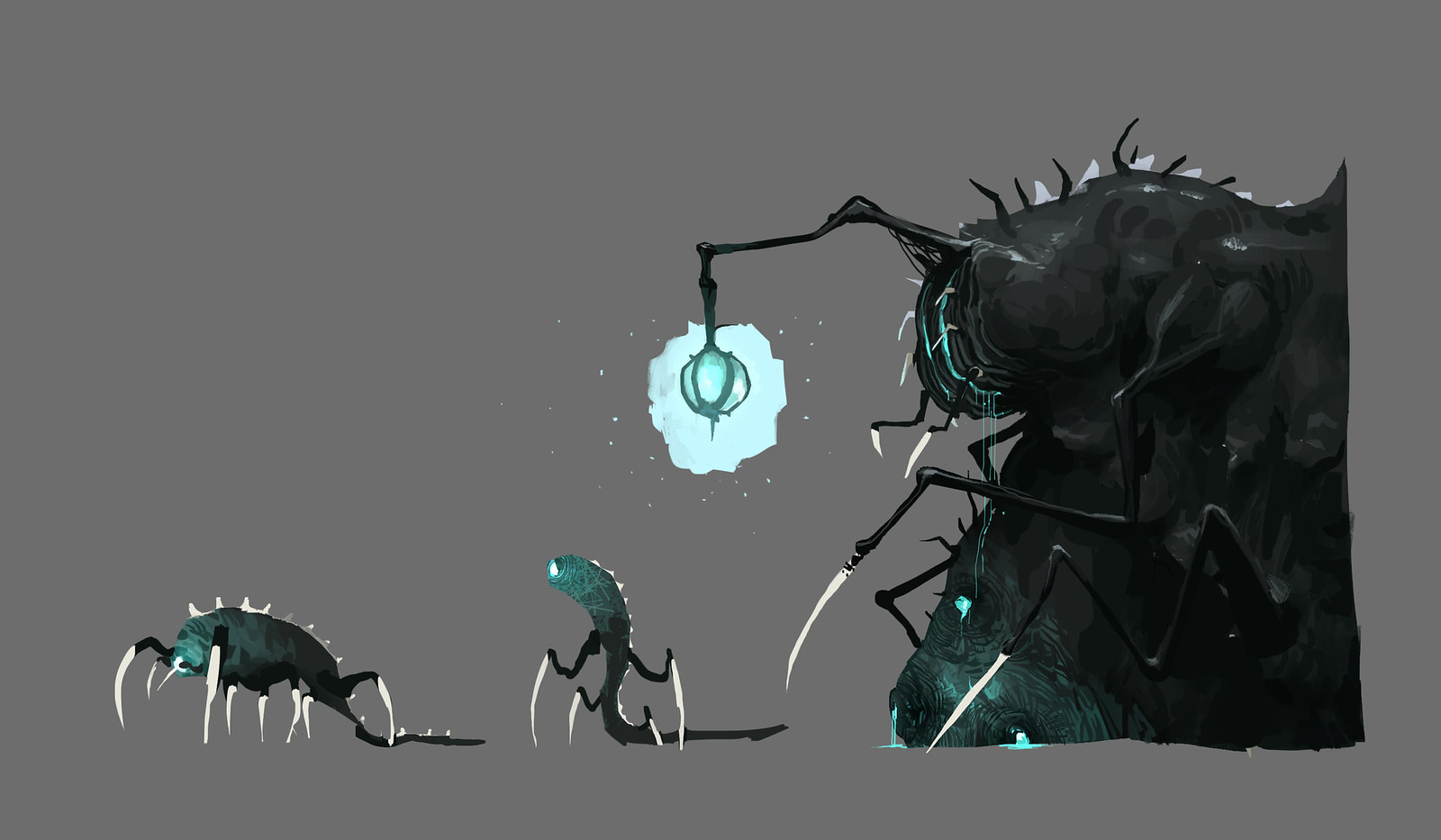 First designed as a boss without movements, it finally became The Anomaly, boss of the second level who moves around and creates little foes that attack you. However, we kept that idea of motionless boss for The Ritualist that you’ll encounter later in the game. Because our community is really important to us, we decided to have two of our Kickstarter backers design two bosses and follow their instructions as much as possible, and this is how The Virgin and Nekosh were born.

For the Virgin, we went for something original, as the backer wanted you to fight her without directly fighting her… but I won’t say any more to avoid spoilers!

The other one, Nekosh, is based on the other backer’s fire priest cosplay. We tried to reproduce his design and instructions for Nekosh attacks and patterns as closely as possible.

We can’t thank them enough for their help and great ideas!

Finally, here’s another concept we wanted to share with you, directly inspired by an attack in a shonen manga (did we tell you that we like manga?) with ninjas with a weird way of running…

As you can see, bosses are really something we spent a lot of time working on in order to make them unique and memorable.

There are tons of others to discover throughout the game and we can’t wait to hear which ones are your favourites! The whole team hopes you’ll have a great time playing Dark Devotion and wishes you good luck for your adventure in the Temple.

Dancing In The Moonlight

Were Stuck with the Touchpad; How Should it Improve?

May 30, 2020
Ammika Harris managed to shock some of her fans with these latest photos that she shared on her social media account. Chris Brown’s baby...

Why Gal Gadot Was "Nervous" to Play Wonder Woman