The Neo Geo Mini is one of the coolest retro mini consoles designs, and the Samurai Shodown Limited Edition (See it on Amazon) takes the self-contained mini-arcade cabinet and flexes a little extra design muscle.It’s a really comprehensive retro mini machine. Inside you’ll find 40 Neo Geo games, including every Samurai Shodown game released for the system, which comes as no surprise since this is a special edition built around the series.

But there’s a whole slew of other classic Neo Geo fighting games, including The King of Fighters ’97, ’98 and ’99. In fact, 20 of the 40 included games are fighters, but you’ll also find the first 3 Metal Slug games and other games you may have forgotten about or never heard of in the first place. But is it more than just a novelty for hardcore Neo Geo collectors? We put it through its paces to find out. 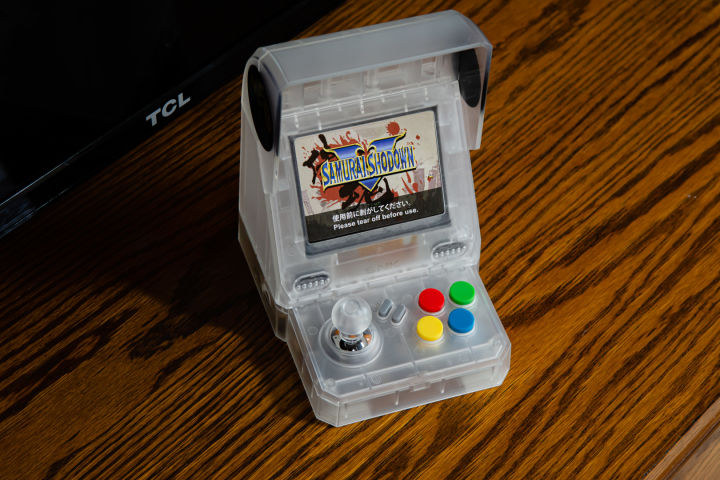 Growing up, the Neo Geo was legendary, bordering on mythical. I never saw one in person (outside of the arcade machines), nor did I know a single person who owned one. Instead, my friends and I only knew of Neo Geo from magazine articles and ads listing the home console for close to $600, with individual games coming in at $200 or so. The Neo Geo Mini Samurai Shodown limited edition carries on the tradition of being pricier than its competitors, carrying a $139.99 list price. That’s pretty steep, and even the regular edition Neo Geo Mini, featuring an extremely similar line-up (trading a few Metal Slug games for Samurai Shodown), can be found at Amazon for $95 without controllers and $119 with a pair.

To this day, I’ve never actually seen an actual Neo Geo home system in the flesh, outside of a convention or two. It remains a legendary object in my mind, a unicorn among retro consoles.

Its legendary status, coupled with my love of all-in-one mini consoles, meant I was extremely excited to get my hands on the Neo Geo Mini Samurai Shodown Limited Edition set for review. Unfortunately, while there is certainly a lot to love, it doesn’t quite match up to the myth. 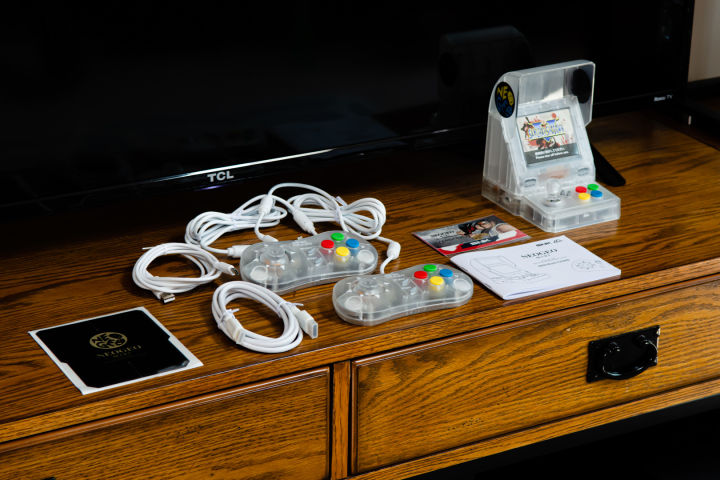 For someone who obsesses over 1990s design aesthetics, the Neo Geo Mini Samurai Shodown edition delivers right out of the gate with its frosted, translucent plastic casing. The design extends to the two controllers, as well. There are three version of the Samurai Shodown Neo Geo Mini in red, blue, and white, each themed to a character. I’m reviewing the Haohmaru white edition.

The subtle reveal of the Neo Geo Mini’s interior through its soft-focusing plastic case makes for a great contrast with its colorful input buttons. The bright and cheerful A, B, C, and D buttons really pop on both the console itself and the included controllers. 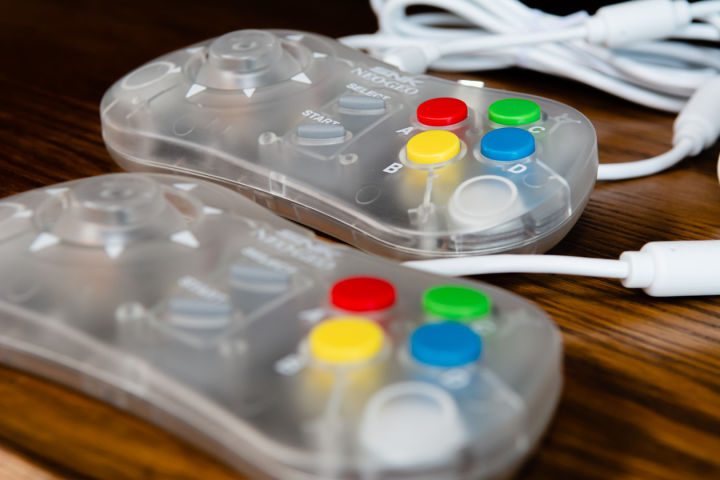 The Samurai Shodown limited edition includes two different marquee stickers: one featuring Samurai Showdown character Haohmaru, and another, more generic, Samurai Showdown marquee. I had no trouble attaching the sticker to the marquee of the Neo Geo Mini, nor was there a problem getting the control panel sticker attached. Both are high-quality foil stickers, which I was pleasantly surprised to see. They should last much longer than a comparable paper or vinyl sticker. 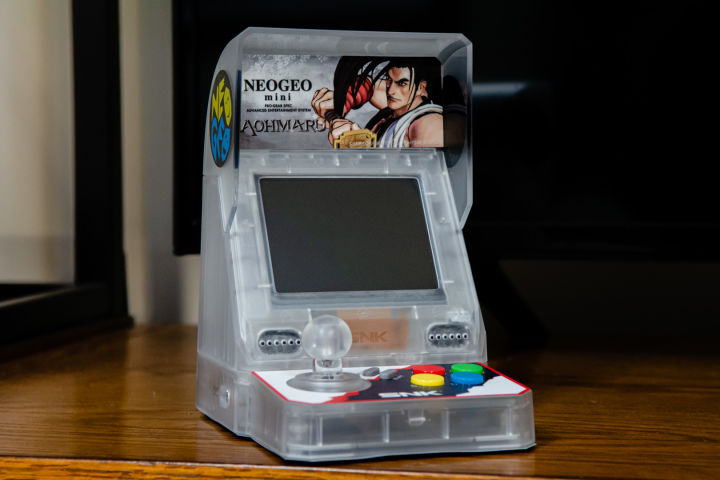 Also included in the box is a non-skid pad for the bottom of the console. I almost didn’t put it on, because I didn’t think it would make much difference. The console itself already includes non-skid rubber feet, and I felt like the pad would just be overkill. I was completely wrong. The non-skid pad works so incredibly well, at first I was worried I had somehow bonded the Neo Geo Mini to the wood of my entertainment center. But it picks up easily, leaving no residue or mark. It’s honestly incredible how well it resists sliding around when you play games directly on the console. It just won’t budge. On the control panel of the Neo Geo Mini is a tiny joystick, for true arcade-action. It feels surprisingly fantastic. There’s no sloppiness or wiggle to it. It’s one of the best-feeling joysticks I’ve used, allowing for 360-degrees of unfettered motion: there’s no square or octagon gate here, if you’re wondering. The joystick snaps back to center without hesitation when you let go. 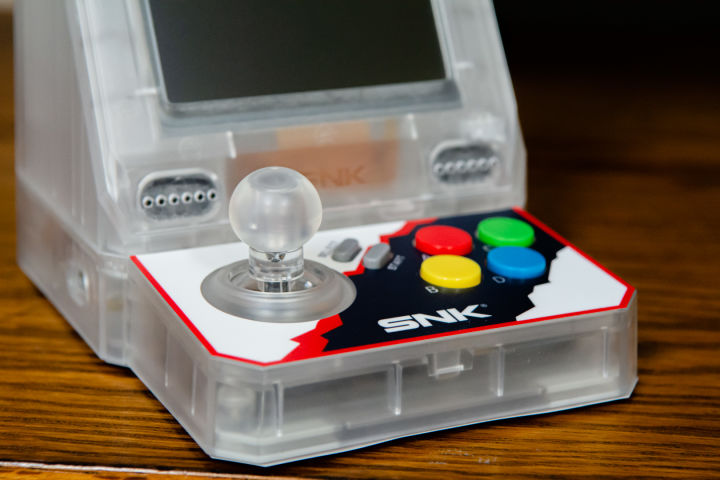 The two included controllers are also excellent. They don’t feel at all flimsy, and feature excellent, springy buttons. My one gripe is the select and start buttons are stacked on top of on another, so I often hit start when I meant to hit select, and vice versa. They’re also USB-C, but I was disappointed when I plugged one into my Windows 10 machine and it wasn’t recognized.

Power for the Neo Geo Mini is provided via USB-C port, and video output is done with a mini HDMI-to-HDMI cable. All the cabling is matching white, with Neo Geo branding on the connectors themselves. It’s a nice premium touch.

The built-in screen is 3.5-inches and looks great. It is crisp with excellent brightness and not a hint of ghosting. It was a little underwhelming during peak sunlight, but plenty bright otherwise. There are also two surprisingly loud front-facing speakers. The built-ins lack richness of sound, which isn’t a surprise. There’s a 3.5mm jack in the back if you want to hook up a set of headphones or even small external speakers.

There are 40 games built into the Neo Geo Mini Samurai Shodown edition, including all of the Samurai Shodown games released for Neo Geo. The games run the genre-gauntlet, too. Even though there’s a heavy emphasis on fighting games (half of the total library), it includes run and gun classics like Metal Slug 1-3 and even weird arcade sports games like Soccer Brawl.

Playing on the 3.5 inch screen is more fun than I expected. The tiny arcade console’s buttons are perfectly sized and spaced on the console itself, and the non-skid pad keeps it firmly in place. The games also look excellent on the tiny screen. Unfortunately, plugging it into a proper TV and treating it more like a SNES Classic-style mini console is when the experience is diminished. 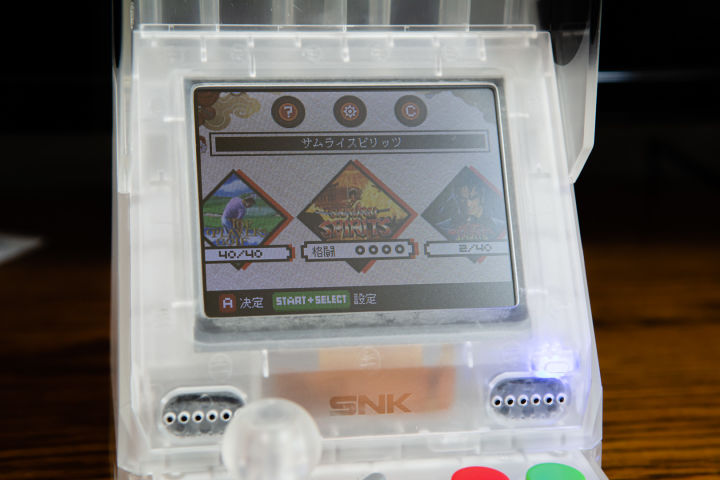 I was most excited to play the Neo Geo Mini on the big screen. I hoped this 40-game collection would earn a place right next to the SNES Classic in my entertainment center. The built-in arcade cabinet screen is super cool and a lot of fun, but the ability to sit back on the couch and play the games in 55-inches of goodness is what really appealed to me about the Neo Geo Mini. Unfortunately the games simply don’t look good when output to a TV.

It’s not because the source material isn’t good looking, either. Far from it. Metal Slug 3 is one of the most, if not THE most beautiful pixel-art game ever created, but the Neo Geo Mini lacks a pixel-perfect mode. Instead, it automatically defaults to a smeared “smoothing” mode, the sort of thing lots of emulated games include to soften the hard edges of pixelated graphics. There’s an option in the menu to turn “image quality optimization” on or off, but neither looks good. They just look bad in slightly different ways. The philosophy behind graphics smoothing of pixel art games is since these games were designed for CRT use, they were never meant to be seen with the perfect sharpness modern displays afford. But unless you also include scan lines in the emulation, smoothing those pixels just makes them look bad.

The problem I immediately ran into was everything is in Japanese: every menu, game title, and option.

I played the ACA Neo Geo Classics version of Metal Slug 3 on my Nintendo Switch immediately after, which includes a pixel-perfect mode, and it looked immeasurably better than it does through the Neo Geo Mini outputting through the exact same television. It’s such a shame because the Samurai Shodown games have some of the most jaw-droppingly gorgeous pixel-art backgrounds in all of gaming, and they’re tarnished by smeared graphics.

It’s also worth noting the Neo Geo Mini comes set to its default Japanese language mode for all console and game UI. Even the packaging is in Japanese. I don’t have a problem playing a Japenese-made game in its native Japanese, don’t get me wrong. But being forced to stumble through foreign-language menus to switch the language to English may frustrate more casual purchasers, and feels like something that should have been addressed for the US release. The instruction booklet is printed in several languages, but doesn’t include a section on how to change the language in the console’s menu. I just sort of lucked into it by playing around with the menu screens until I found one with language options. It’s very confusing, and for a brief moment I was worried I had been sent the wrong device. A clearer, up-front language select would have been welcome. 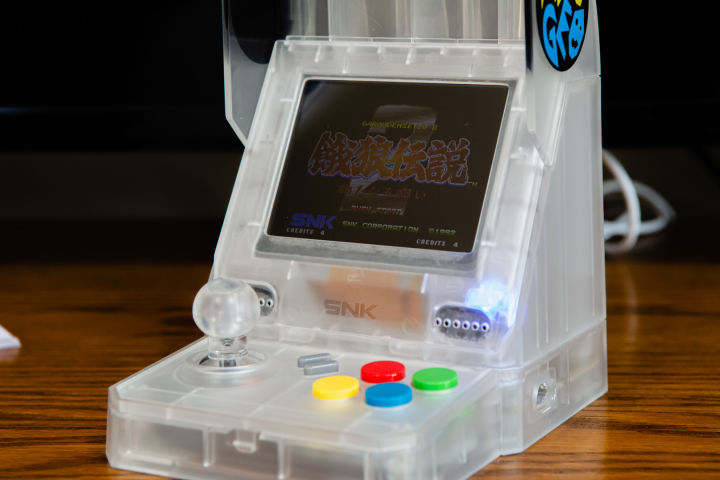 Still, in spite of the difficulty finding the language menu and its slightly-smeared graphics when output to a TV, playing games on the Neo Geo Mini is a ton of fun. The controller D-pads are basically joysticks with a flat, thumb-friendly head on them, and they work better than most when it comes to fighting games. The universal usefulness translates to the other genres, as well.

The Neo Geo Mini Samurai Shodown limited edition comes in three different colors and can be ordered from Amazon for $139.99. 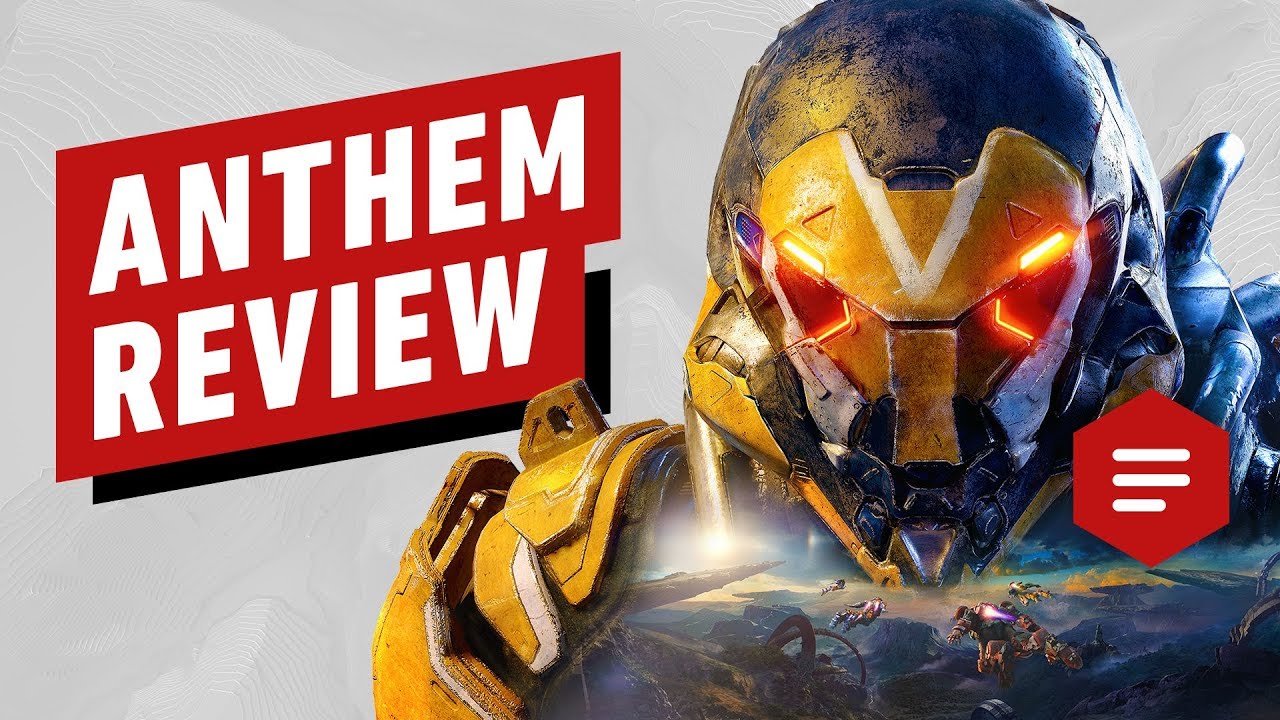 Anthem reviewed on PC by James Duggan. Also available for Xbox One and PlayStation 4. Subscribe to IGN for more! http://www.youtube.com/user/IGNentertainment?sub_confirmation=1 —————————— […] 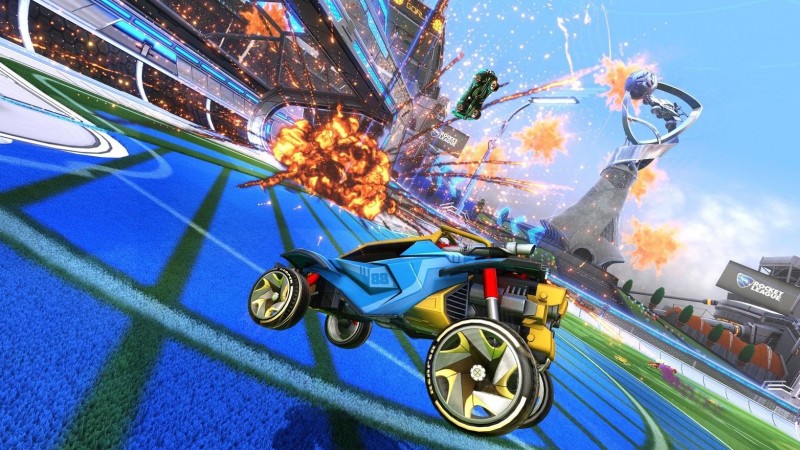 Update (7:40 p.m. CT): Epic has clarified again that, despite the previous statement, no decision has been made about Rocket League being […] 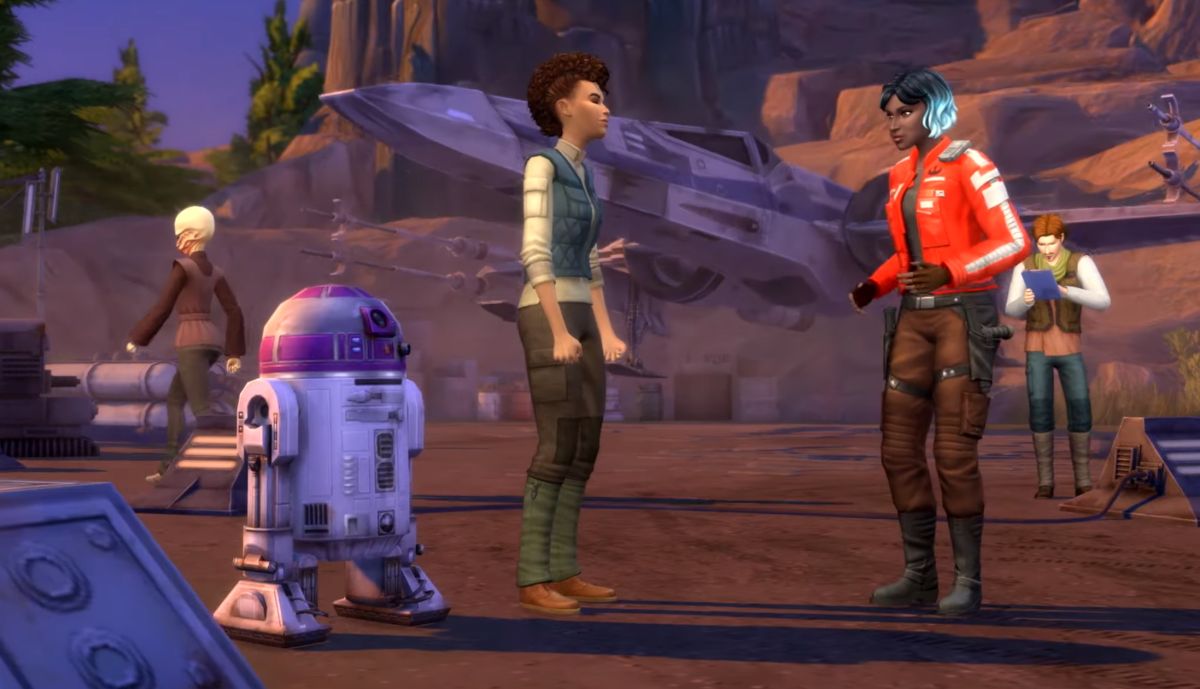 When the Star Wars: Journey to Batuu Game Pack was announced for The Sims 4 earlier today, it looked like a fairly […]