This week we take a look at how Apple could incorporate a camera in the band of the Apple Watch, and all the new features rumored to be coming to the Series 5 in September.  Also, the first public beta of iOS 13, MacOS and iPadOS are out in the wild. And Apple dropped the bombshell that Jony Ive, the company’s design chief since the all-in-one iMac design over 20 years ago will be leaving the company. Get all the details below on the latest Apple news in this week’s Apple Core roundup.

The Apple Watch could be getting a camera or two

The Apple Watch could be adding another key iPhone feature to its growing bag of tricks. A new patent published in by the US Patent and Trademark Office shows Apple’s designs of an Apple Watch with a built-in camera on the watch band.

This is not the first we’ve heard about a camera on the Apple Watch, but it is the first patent of its kind. Previous rumors suggested we might see a camera either on or near the watch screen for FaceTime or FaceID. According to the patent, though, this one would be a proper point-and-shoot with a dual sensor (one each on the back and front of the band) that would give you a 360-degree field of view. The band itself would be made of malleable metal and could hold its position so you wouldn’t have to contort your wrist to get a shot. To capture the shot, you would press a button on the band, pinch or dictate a command.

The patent proves that Apple is definitely considering this feature for the watch, but it doesn’t guarantee that it will be implemented anytime soon — or at all. If Apple does move forward with this concept, it would still take a few years for it to materialize and would definitely not be ready for a September 2019 launch.

Apple Watch Series 5: What to expect

It’s not a given that Apple will launch the Apple Watch Series 5 in 2019, but considering it’s launched a new Apple Watch every year in September (alongside new iPhones) for the past four years in a row, I would say there’s a pretty good chance.

Compared to the number of leaks and rumors we’ve seen about the next iPhone 11, we know very little about Apple’s plans for the Series 5, but there are at least some indications.

For starters, we know Apple Watch Series 5 will continue to be more independent from the iPhone. WatchOS 6 will bring a standalone app store to the Apple Watch, along with over-the-air updates that you can download directly to the watch. More recently we learned that WatchOS 6 will give you access to workout summaries on the Apple Watch, even after you’ve dismissed them (before you had to look for them in the Activities app on the iPhone).

The other thing we know (almost for certain) is that Apple will continue to push the boundaries on health features in the next Apple Watch.

WatchOS 5.2 introduced the Cycle app to track women’s menstrual cycles and the Noise app to monitor the noise levels you’re exposed to during the day, but the Series 5 could push it even further.

There are a few rumors suggesting blood pressure and glucose monitoring as potential health features for the next Apple Watch, but these would likely require FDA clearance and some kind of clinical study. At this point last year, Apple had already announced its Heart Health Study which became the precursor to the ECG feature it launched on the Series 4.

The other likely alternative would be native sleep tracking. Fitbit, Samsung, Garmin and Polar all have this feature on their wearable devices and are continuing to expand its use cases. Sleep tracking has been available on the Apple Watch only through third-party apps, and the battery life is still a big hurdle. Even the Series 4 barely gives you enough juice to monitor you through the night.

The Series 5 could finally deliver on better battery life and sleep tracking.

And the wildcard would be a round watch face for the Series 5. Apple has filed patents with this circular design, but hasn’t deviated much from the original design since launch. Perhaps that was Jony Ive’s last big contribution to the Apple Watch design before leaving the company?

Jony Ive, Apple’s chief design officer, will leave the company after a nearly 30-year run. Apple announced his departure on its website, stating he will be starting an independent design firm with Apple as one of his first and primary clients.

Apple CEO Tim Cook said “Apple will continue to benefit from Jony’s talents by working directly with him on exclusive projects, and through the ongoing work of the brilliant and passionate design team he has built”. But it’s still a big blow to the company. Ive has been instrumental in the success of the company and its products for the past 27 years.

Apple head of design Jony Ive departs to start his own…

The London-born designer is the creative visionary behind Apple’s most iconic products: the original iMac, the iPod, pretty much every iteration of the iPhone, the MacBook and the Apple Watch. And his talent stretched beyond just the products. He’s had a hand in designing the iOS interface and Apple Park, Apple’s new spaceship-like headquarters in Cupertino. His other big contribution to the company: his distinctive British accent, with which he narrated a lot of Apple’s marketing and promotional videos.

“I am most proud of the lasting work we have done to create a design team, process and culture at Apple that is without peer. Today it is stronger, more vibrant and more talented than at any point in Apple’s history,” Ive said in a statement.

What happens next? Apple hasn’t announced an official successor for Ive, but in the meantime the design team will be led by Evans Hankey, vice president of industrial design, and Alan Dye, vice president of human interface design, both of whom will report to Apple COO Jeff Williams. Ive will remain at Apple until later this year and will officially launch his own design studio in 2020.

The other big Apple news this week was the release of the public beta for iOS, MacOS and iPadOS. Apple jumped the gun this time around, launching them a few weeks earlier than in previous years.

After hearing about them at the WWDC keynote and with two developer’s betas in the bag, we already knew what to expect from these updates, but they are finally available for anyone to try out (via Apple’s public beta program).

Users who download the public beta of iOS 13 can start testing out dark mode, video editing in the photo apps and the new Look Around feature in the maps app. iPadOS brings better multitasking to the iPad and the ability to transfer files directly from a USB stick (with a dongle, obviously) or directly from a USB-C drive if you have the latest iPad. And MacOS Catalina can transform your iPad into an external monitor with the Sidecar feature and brings more native iOS apps to the Mac.

That said, you should download at your own risk, because there’s still a chance it could go wrong (it is a beta, after all). Apple recommends backing up all your content and installing the public betas on a secondary device.

By Jack M. Germain Dec 10, 2019 11:12 AM PT Researchers at Swedish university ETH Zurichat have unveiled a method for mixing […] Jony Ive (left) opening his glasses while holding an iPad Pro. James Martin/CNET When Apple announced on Thursday that Jony Ive was […] 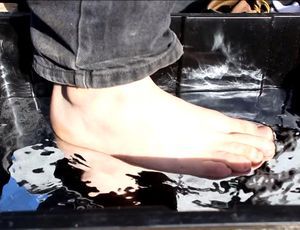 Cody Don Reeder (known as just “Cody” to fans of his YouTube science videos) had a compelling question: “Can I stand on […]