The La Liga winners earned a comfortable 3-0 win over Jurgen Klopp’s men in the semi-final first leg at the Camp Nou, but were stunned by the Reds at Anfield as braces from Divock Origi and Georginio Wijnaldum fired the Merseysiders into the final.

Liverpool went on to lift the big-eared trophy for the sixth time with victory over Tottenham Hotspur, leaving Lionel Messi and co. to reflect on what could have been in Madrid.

The Barcelona icon was clearly devastated after the loss as he stormed through the mixed zone, before holding a first press conference in four years to brand the match ‘one of the worst experiences’ in his illustrious career.

The Argentinian said: “We were hit hard by it. Regrettably, that game has tainted the season.

“I haven’t watched the game again. The worst thing is that we didn’t compete. We let them walk all over us.

“We were all thinking about being champions and we were all very disappointed, first for the elimination, second for the manner, third for the fact it happened again.

“We have to apologise for the second half of the match at Liverpool. Not because of the result, but because of how it looked and that we didn’t compete.

“It was one of the worst experiences in my career.

“Winning the Copa del Rey will be the best way to end the season.”

Barcelona went on to lose the Copa del Rey final 2-1 to Valencia, however.

Although Messi was in no joking mood after the defeat on Merseyside, he has admitted since that his second son Mateo now likes to wind him up over the loss.

He told TyC Sports: “We were playing at home and were going for a kick-about. Mateo said to me ‘You’re Barça and I’m Liverpool, cos I’ll beat you’. He’s got a lot to learn!”

And it is not just over the shock Champions League exit that Messi is mocked by his son, but also the El Clasico rivalry between Barcelona and Real Madrid.

Messi added: “Sometimes the telly is on and he cheers Madrid’s goals. My son Thiago gets annoyed and Mateo cheers them to annoy him!”

Key events Show key events only Please turn on JavaScript to use this feature 34km to go: Allin rolls across the finish […]

Adrián’s hectic start to life at Liverpool gave Jürgen Klopp another European trophy, reason to sprint half the length of the pitch […] 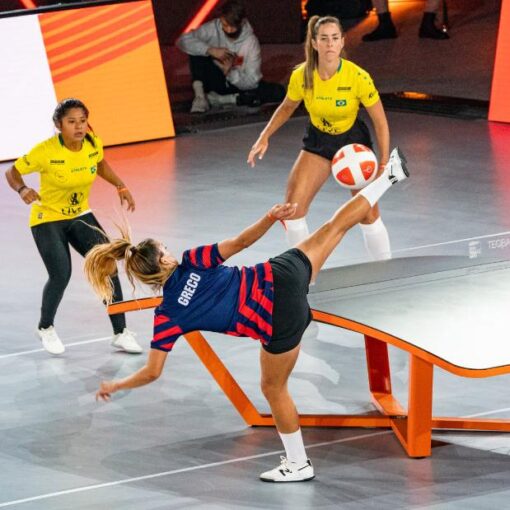 The sport is charging towards its goal of being included in the 2028 Olympics, and the competition is heating up as athletes […]