The Rams defeated the Dallas Cowboys on Saturday night to earn their place in the NFC Championship game.

They will play either the New Orleans Saints or the Philadelphia Eagles next Sunday night.

Jared Goff threw 186 yards and rushed for 12 yards as the Rams’ offence penetrated the Cowboys defence seemingly at will.

The Rams went into half-time 20-7 up, while the defence showed its’ stability in the second half to stop the Cowboys from getting back into the game.

And after the game the Lakers’ superstar appeared in the team’s locker room.

Initially, reports emerged that James had left the game early, however, those were dispelled when ‘The King’ joined in the celebrations.

A lifelong Cowboys fan, James’ appearance surprised many, though it was speculated that he was just passing through the locker room.

He was joined at the game by team-mates Rajon Rondo and Kentavious Caldwell-Pope.

James is still recovering from a groin strain suffered on Christmas Day.

The star has not played since the injury, and the team has struggled without him.

The Lakers have won just twice in his absence, losing six times.

Rondo is also recovering from an injury, and has not played since Christmas Day.

In late December he underwent surgery for a finger sprain.

He is expected to return in time for either the January 30 game against the Philadelphia 76ers or the LA Clippers on February 1.

James is hoping to return this week against the OKC Thunder on Thursday night. 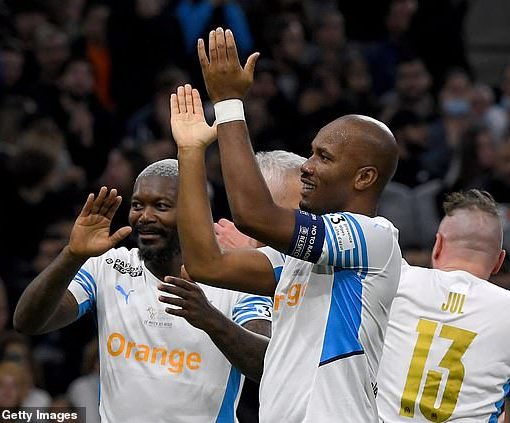 He’s still got it! Chelsea legend Didier Drogba haunts Arsene Wenger once again after scoring a HAT-TRICK for Marseille legends – including […]