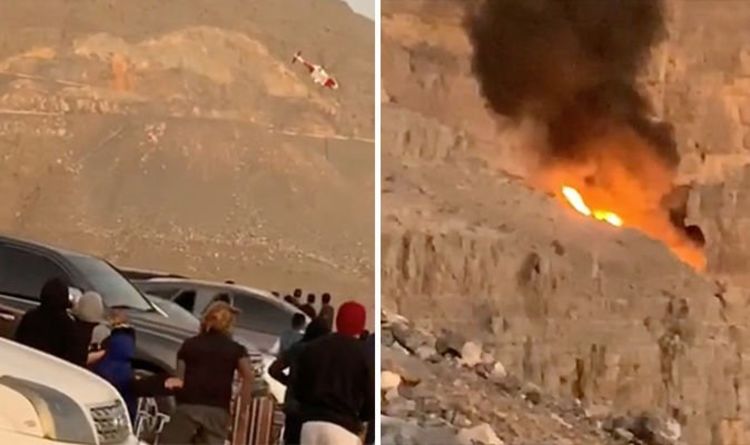 The horrifying incident happened next to the Jebel Jais mountain in the northern United Arab emirate of Ras Al-Khaimah. According to local media, three bodies have been recovered and the search for the fourth crew member, a medic, is still underway. Those who have been identified were all Emirati citizens.

The men were on their way to rescue a person in the mountains but crashed before they reached them.

Eyewitness Salam Naif told Khaleej Times: “The chopper went into a spin all of a sudden and then crashed into the mountain. It burst into a ball of fire.”

An official added: “The accident happened at 5:50pm on Saturday and the helicopter was on a mission to airlift an injured man from Jebel Jais.

A spokesman said: “The tragic chopper collision took place 50 minutes after the closure of the zipline.”

Jebel Jais is the tallest mountain in the UAE, standing at 1934 metres.

The zipline, which is 2800 metres long, officially opened in February and can reach speeds of over 100 mph.

What next for China? Australia hits back against Xi Jinping as trade war fears grow

Israeli drone falls inside Lebanon, Hezbollah says it shot it down

Uber and Lyft given extension in landmark case about driver labor