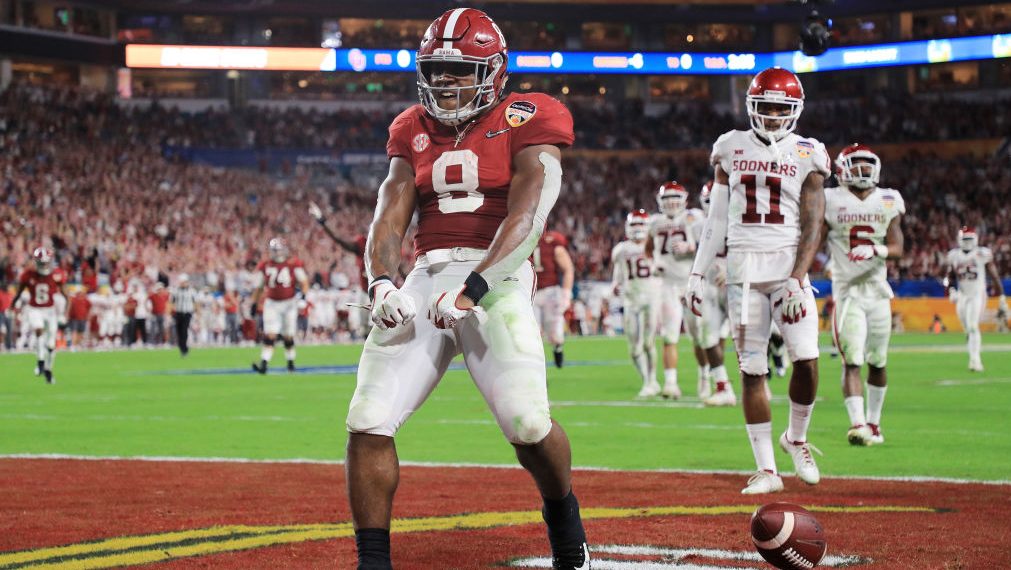 No. 1 Alabama began its run to a second straight national championship and its sixth of the Nick Saban era exactly where it left off from last year’s title game — with a long throw from Tua Tagovailoa to Devonta Smith, the same players who threw and caught the astonishing rainbow to beat Georgia last January. Damien Harris hammered in a 1-yard touchdown run six plays later, and the Crimson Tide was officially off to the races.

Alabama’s Heisman runner-up returned to the ultra-efficient form that made him the favorite for most of the season, while Quinnen Williams and company harassed Heisman winner Kyler Murray unlike anything he has ever seen, allowing the Crimson Tide to race to a 28-0 lead just 17 minutes into Saturday night’s Capital One Orange Bowl.

Murray and company eventually got their sea legs under them, but by then it was too little, too late. With a 45-34 victory over the No. 4 Sooners, Alabama advanced to yet another national championship game on Jan. 7 in Santa Clara, Calif.

The Tide will once again meet Clemson, a 30-3 winner over Notre Dame earlier today, for the fourth straight season, and the third time in the College Football Playoff National Championship. It will be Alabama’s seventh national championship appearance in the past 10 seasons.

Alabama scored touchdowns on its first four possessions, a string of offensive perfection that saw the Tide rack up 239 yards on 25 plays. Tagovailoa pushed Alabama up 14-0 with a 10-yard dime to Henry Ruggs III, but the emblematic score came on a 27-yard toss to Josh Jacobs on a play that was designed as a dump off but became a thundering shrine to Alabama’s physical dominance over its crimson counterpart when the Tide running back collided with Oklahoma safety Robert Barnes at the goal line, forcing him to be helped off the field.

Tagovailoa finished the game 24-of-27 (all three incompletions were officially scored as drops) for 318 yards and four touchdowns, while Jacobs totaled 158 yards and a touchdown on 19 touches.

Meanwhile, Murray saw a level of pressure on his first two drop backs that he has never seen before in his life. After a 3-yard keeper to open the game, he was sacked by Anfernee Jennings on second down, then sacked again by Christian Miller on third down.

Oklahoma’s first three possessions ended in punts; by that point, Alabama held a 21-0 lead on the score board and a 191-0 edge in total yards.

Murray and company joined the game after that. A 4-play, 75-yard touchdown drive put the Sooners on the board at the 11:48 mark of the second quarter, and Oklahoma finished the game with an Oklahoma-like 471 yards of total offense, the most gained by an Alabama opponent this season.

Murray finished the game 19-of-37 passing for 308 yards and two touchdowns while rushing 17 times for 109 yards and another score, showcasing a mettle that this season has not asked him to show while at the same time never really pulling Oklahoma back in the game. After beginning the game by falling in a 28-point hole, OU pulled back within 11 at three different points but could get no closer.

After a 49-yard Murray pass to Charleston Rambo at the 3:03 mark of the third quarter pulled Oklahoma within 31-20, Alabama went 75 yards in nine plays and just under five minutes to go to inch back ahead at 38-20. When Murray hit CeeDee Lamb for a 10-yard score to pull his team within 38-27 at the 8:31 mark of the fourth quarter, Alabama went 46 yards in five plays, pushing its lead to 45-27 on a 13-yard strike from Tua to Biletnikoff Award winner Jerry Jeudy at the 6:08 mark of the fourth quarter.

And when Murray scampered in for an 8-yard touchdown run at the 4:23 mark, Alabama successfully ran out the remaining 263 seconds to advance to yet another national championship game.

Impatient toddler stuffs fists full of butter, sugar, and flour in his mouth while baking

Treasured Recipes From Some of Italy’s Fashion Families