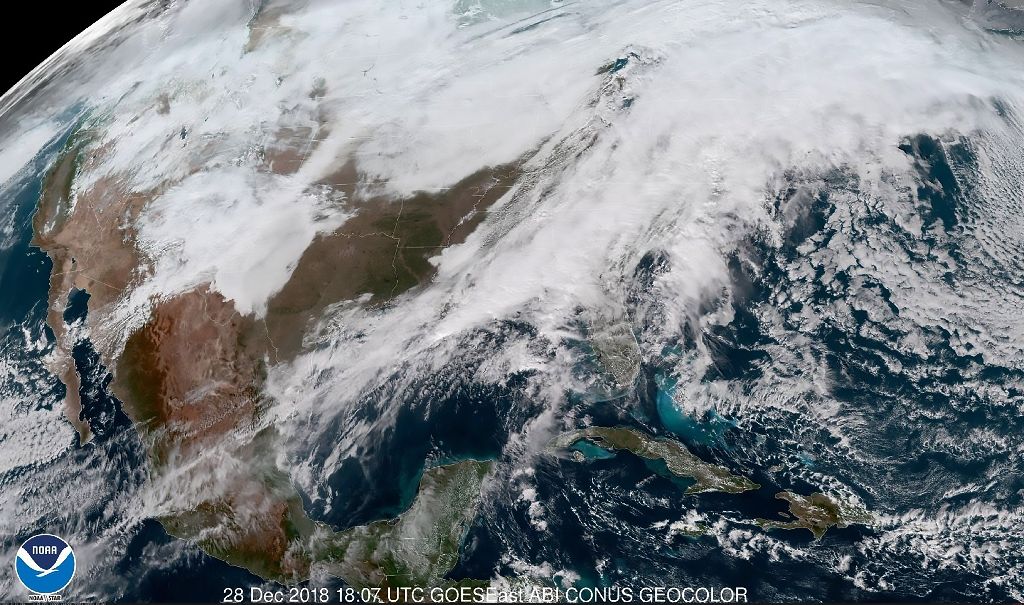 Chicago (AFP) – Parts of the United States were digging out Saturday from winter storms that media reports said led to at least seven deaths, while warmer regions braced for potential flooding during the New Year’s travel period.

Hardest hit were parts of the northern Plains, the upper Midwest, and a southwestern region from Arizona to western Texas. As storm clouds moved east, they were set to bring heavy rain and probably flooding to the Gulf Coast, and both rain and freezing rain to New England.

Flight tracker FlightAware reported more than 129 flight cancellations and 1,006 delays Saturday — down from more than 500 cancelations and 5,700 delays on Friday — as the winter storm hit north-central and Midwestern states with up to 12 inches (30 centimeters) of snow.

In the southwestern state of New Mexico, forecasters called for up to 18 inches, with temperatures far below normal, the National Weather Service (NWS) said.

Southeastern states braced for a deluge of rain, and millions in the South were warned of potential flooding.

Biloxi, Mississippi was soaked with five inches of rain. Tallahassee, Florida braced for three inches or more of rain just a week after being hit by eight inches, adding to fears of flooding, the Tallahassee Democrat reported.

The weather contributed to several deaths during the week.

A 58-year-old woman in Louisiana was killed Wednesday when a tree struck by lightning fell on her home, according to TV station WDSU.

A crash Thursday involving a snowplow and a pickup truck in Dunn County, North Dakota, claimed the life of the 37-year-old truck driver, the Twin Cities Pioneer Press newspaper reported.

A 17-year-old boy in Cedar Rapids, Iowa, was killed in a two-car collision that police blamed on icy roads, the Des Moines Register reported.

A woman on a camping trip in Tennessee died when she was swept away by flood waters while trying to cross a creek, CNN reported.

It said two people died in weather-related collisions in Minnesota, one when a pedestrian was struck by a snowplow blade in Crow Wing County amid poor visibility.

Numerous roads were closed Thursday in the Dakotas, Minnesota, Kansas and Iowa, but by Saturday crews were making progress clearing affected areas.

TV channel KWCH in Wichita, Kansas said on Saturday that safe travel conditions had finally been restored across that state.

But the South Dakota Department of Transportation said warnings against travel remained in effect there.

North Dakota on Friday lifted a no-travel advisory that had been issued for the entire east side of the state, even as drifting snow continued to frustrate drivers.

NWS officials in Minnesota cautioned that roads were cloaked in snow, with some areas receiving as much as 16.5 inches.

The weather service predicted the treacherous weather would continue through the weekend in many parts of the country.

Winter weather advisories were in effect Saturday for northern Indiana and southern Michigan.

To the south, heavy rains were forecast in the central Gulf Coast, in the Florida Panhandle, and stretching east to the mid-Atlantic.

Not all of the country suffered, though. The capital Washington enjoyed blue skies and a temperature around 57F (14C) on Saturday.

Alexa gets behind the wheel! Amazon's custom electric delivery van will hit the road in 2022

Climate change and big tech are jeopardising the future of astronomy

Nobel laureate who helped save the ozone layer dies

How airmen in Hawaii are practicing to rescue astronauts at any time, day or night